"Father, tonight could you tell me the story about when the world went dark?"   "Again? Well, my child, it is no mere tale told by a fairy. This was passed down from my great grandfather's greatest grandfather. Now rest your eyes and I will begin. ...Once upon a time..."
— An Elven Father to his Soon-To-Be-Sleeping Child.


A long time ago, before Humans even walked the lands of Ayn, the gods were at war for control over all that was and ever will be. This war continued on, but was almost won by the forces of evil due to a string of events unforeseen by either side.

The gods, oft considered beings of limitless power, were actually restricted by how much essence they had at their disposal. Life could not simply be willed into being...plagues and pestilence had to be formed from some origin...even basic feelings like love and hate were born from chemicals brought to fruition through essence and its formations. The Entities set it up this way to avoid overburdening their creation with the whims and whimsies of its appointed curators. However, there was one being who held the most essence out of them all, made necessary by the very reason for their existence - Wallace - God of Madness . When the world asked 'Why are some animals born with three legs instead of four?', 'Why did lightning strike this stalk of corn and not any of the others?', 'Why do I hear violins when i'm angry?' The universe replies simply: Wallace.   As the very apotheosis of unpredictability, Wallace is unhindered by standard conventions such as wants and needs, and simply serves his own selfish interests, as fickle as they may be. This is why he was afforded a larger pool of essence, as, at any time, he may need vast amounts or as little as possible...Even the Entities could not predict his unruly whims.

"Imagine a die with infinite sides...a never ending amount of numbers. And then imagine the stamina to roll said die a near infinite amount of times. That would be only the tip of the iceberg that is Wallace."
— Ashed Bahir, Theologian

Yet as with a die of infinite sides, given enough time, a string of numbers would eventually form...and that eventuality played out in favor of the terrible axis of power, much to the surprise of the other gods, even those with similar intentions. Previously he could not be counted on work in tandem with the others, until one day the fates aligned his desires with the wills of his dark compatriots...He would wrought destruction upon Ayn and shape it forever. 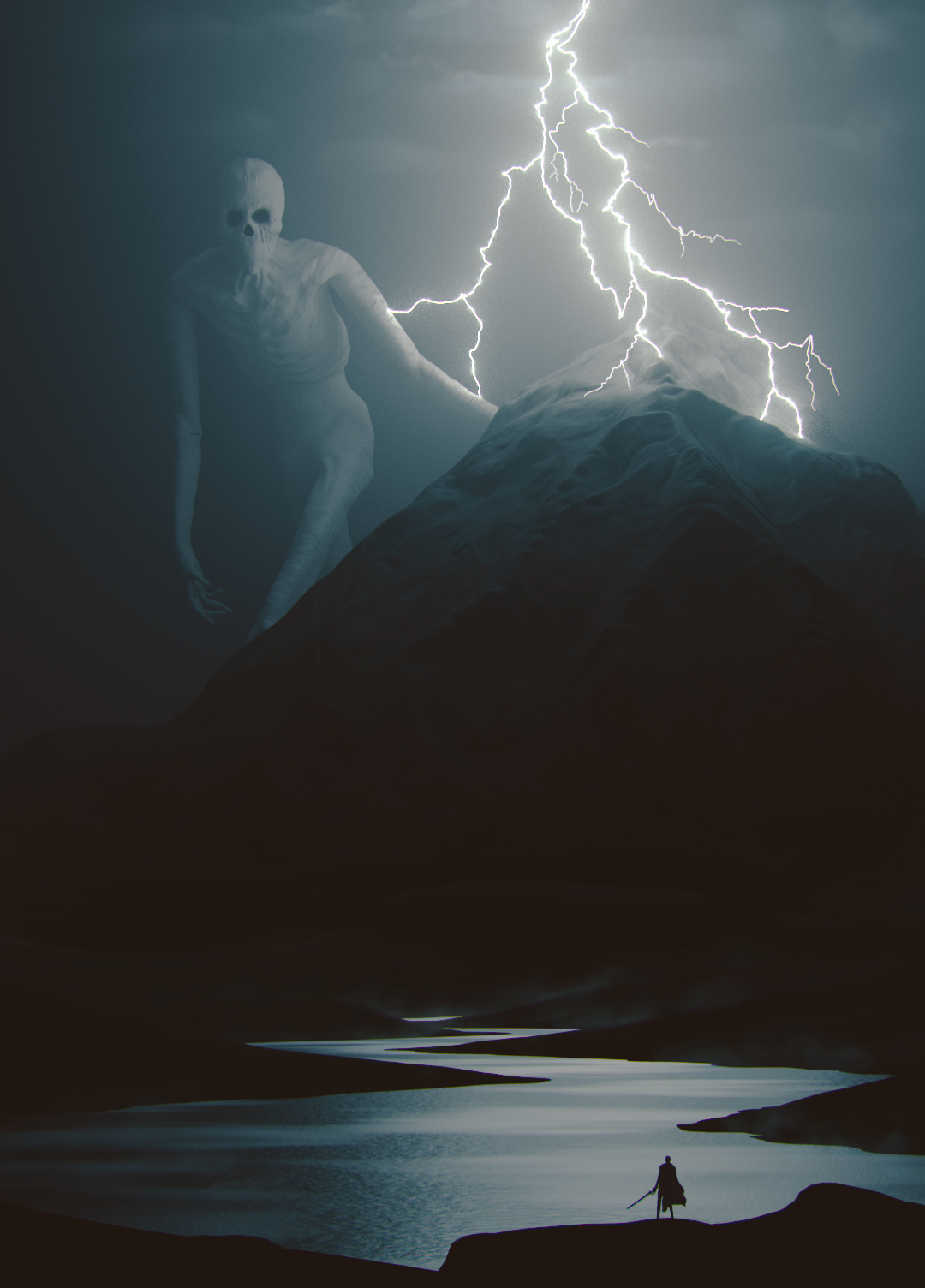 by Bjarke Pedersen
Disregarded by others as a wildcard with little to no impact, Wallace's sinister actions were first unattributed to the deity. The skies went dark, which some prophesied to be an eclipse, a blanket of locusts, or just severe overcast...but it lasted several days, accompanied by lightning but no rain. The crickets did not chirp, the owls did not hoot. This was truly a darkness none had experienced prior, yet the true terror came upon the eyes of a lone Elf.   Atop his horse in the perpetual darkness he strode close to the lake on the outskirts of his home when he spotted a sinister shadow on the horizon. Difficult to make out from the endless shadows, his eyes traced a silhouette most fearsome, and when lightning struck to illuminate the night, his deepest concerns were confirmed. Tall, lumbering, with alabaster skin, as pallid and devoid of color as a marble pillar, the titanic figure stood taller than the very mountains. Its shambling strides treated the terrain with the same respect as broken furniture meant to be stepped over, and its hollowed eye sockets were a sight most foul and eerie. Its sheer presence, uncanny in its humanoid likeness but so obviously malformed, was unnerving and instilled a sense of hopelessness and awe.   Although he was as alarmed as his stamping and braying horse, he rode away in a frantic haste to warn his countrymen. When he arrived, he spoke in labored breaths, demanding an audience with the king.   "My liege!" The man called out through frantic breaths, all previous conversations paused in the sparsely populated throne room, "There is a great evil that looms close by. A monster of titanic proportions."   "Collect yourself. What is it that you have seen...?"   The man recounted his experience on his jaunt outside of the kingdom, sparing no detail in its megalithic stature and frightening appearance, describing in enough sincerity and concern that the king's face washed a pallor, ghostly complexion.   With shaken breath, the king turned to his adviser.

"Rally our forces. I fear the end of man draws near..."

Woooot ok, so first. I accidently deleted the comment on Roses of the Briar. Thanks for leaving it though. I appreciate it! Figures id come return the favor. Saw this lingering and though I'd take a look from the beginning.     So I love how this explains Wallace alarmingly well. I love the set up of the story and how the quotes flow in and out of the narrative. I also love the concept of the infinite die. That's a cool visual and the I laughed about the violin when angry comment. It makes me want to continue, which I certainly shall, and hooks me almost immediately. Very nice good sir. Till part two!