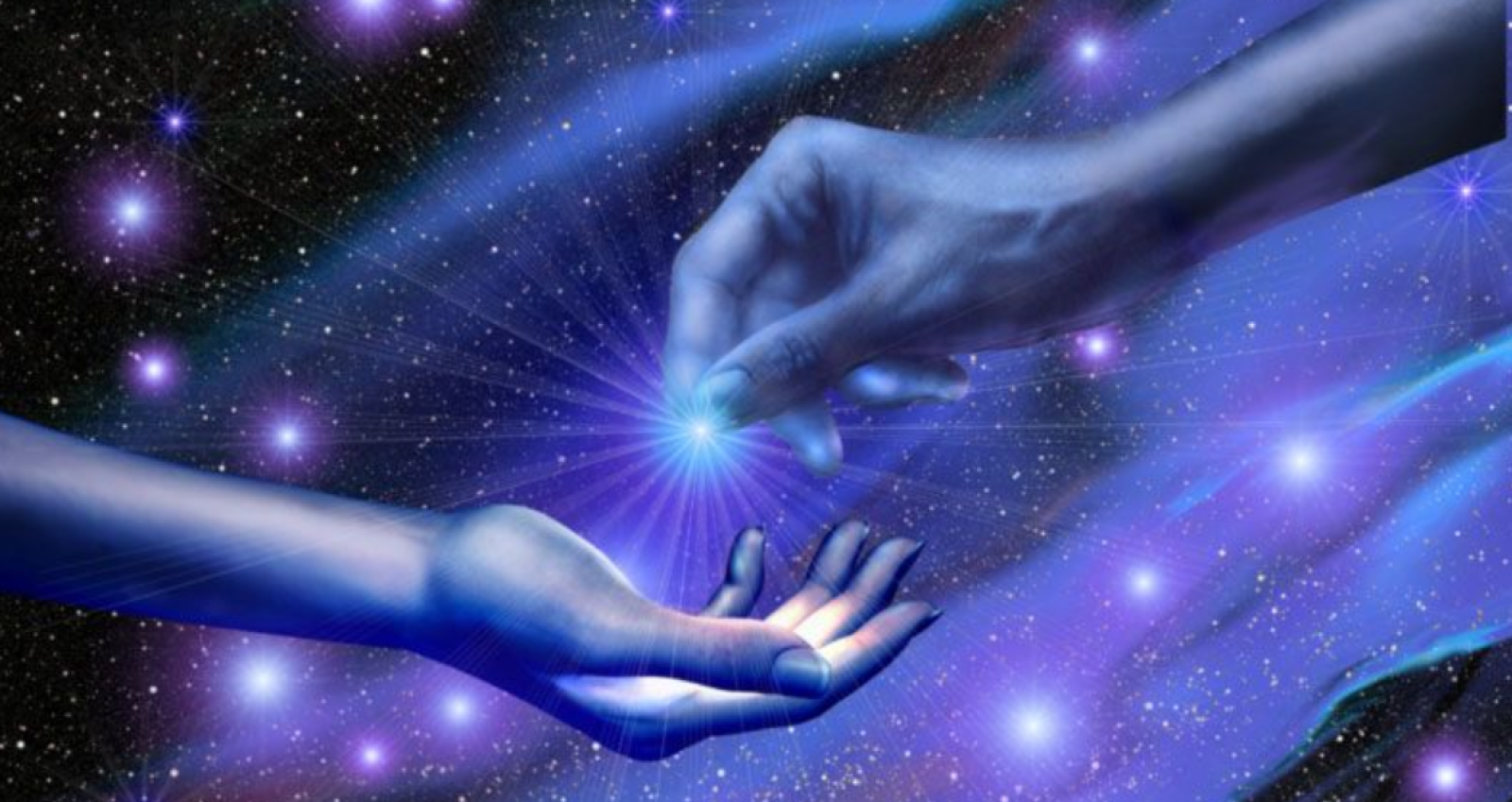 The Entities were becoming restless. None were fulfilling their tasks to any purpose. The Giver was helping to mold new rocks, trees, rivers, mountains and the like, but ultimately not an entirely new creation. The Taker was offering feedback and appreciating what they had been critiquing and appreciating for eons with little variation or wonder. The Beginning and The End were nearly obsolete as life begat new life and death was inevitable and natural in all things...their machinations almost too perfect.

It was time to move on.

Yet despite this, the four agreed that they simply couldn't walk away from a project they had invested so much in. There had to be something in their stead to watch over all they had done. It had to be something with the power to maintain and make change, but the knowledge of when and when not. It needed the one thing the Entities did not have: The ability to understand and empathize.   To the Entities, this world was little more than a marble...a fascinating landscape with little creatures, but considering their colossal power, they were ultimately simple creatures. None of them understood love, loss, pride, jealousy, anger, sadness, happiness, right, wrong, good, nor evil. While they could view a man lose his child to a hungry lion, they would witness the same man hug his wife a bit more, and learn from the mistake to raise his next offspring to be better, more fitting. Likewise, when they saw a woman living in the lap of luxury, they also saw her take advantage of her fellow kin, treating them as subhumanoids and growing bitter and lonely. They were observers, and could only draw conclusions, unable to even understand if these guardians and creatures should be cared for or wiped out beyond their own will to witness.   And so they discussed their plan to create higher beings to watch over domains they saw fit. These beings needed embody their purpose so they could better understand and empathize with the goal to guide these processes in the best way possible. And so they began with two humanoid forms and bound them together as sisters, Ciel - Goddess of Life and Eos - Goddess of Death, for one was never without the other in their observance. Their names were chosen for the sound the essence made as it was shaped by The Giver, and then given life by The Beginning.
Life was introduced first, and slowly her eyes would open, staring into the great cosmos, far too small to fathom the scale of the Entities. "Hello, little one." A voice, seemingly from the beyond spoke, "This world is now your's to oversee and improve." And as she viewed the trees, the mountains, the creatures moving about, her eyes were alight with possibilities. Everything about her was crafted, from her looks and personality to her wonders and motivations, and in spritely, curious fashion, she began to observe high and low, asking questions such as 'What are these creatures?' and 'Why does this plant look like this?' All were answered, until she pointed to the mountains.

"And who looks after these?"

And for that they had no answer. The Giver spoke, "Perhaps you should create life to watch over the mountains." And she was allowed to pull from their essence to create. Short in stature, but sturdy creatures, later that would be known as Dwarves, were crafted with a strong appreciate for the stones and minerals of the mountains. 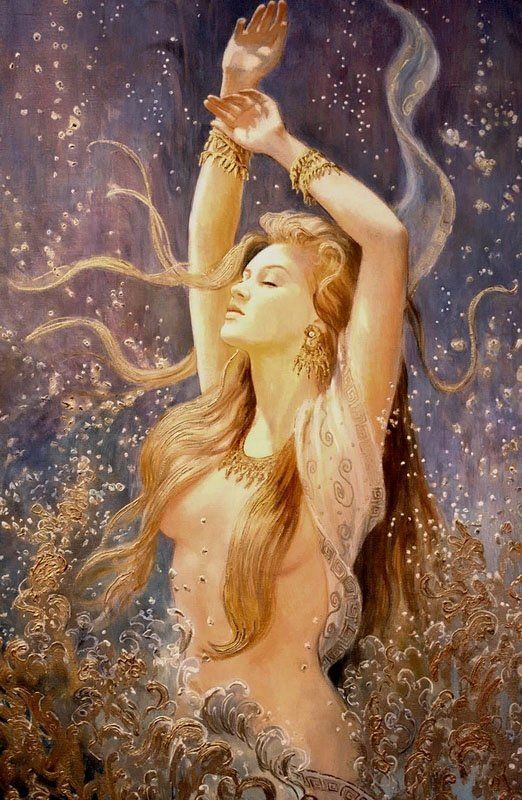 However, in her fledgling and untrained state, she was far too eager to begin her work. Dwarves did as they were intended and began to work their way further into the mountain until they began to die of mysterious means. The core of Ayn was essentially strongly condensed essence in such concentration that, like radiation, it would broil their innards and cook them alive.

"Be careful, young one. Life is often fickle and precarious. You must work with these creatures."

Yet Ciel stood resolute, determined as life was, to make this new life work. She worked diligently to reshape the dwarves like clay. These new creatures would be even smaller and more resilient to the effects of essence. They would watch after the crystals in the caves and the center of the world. These new creatures would eventually name themselves "Gnomes."   Eos - Goddess of Death, more quiet and observant than her sister, opting to simply watch and wait. It was explained to her that essence, known as the building blocks of life both spiritual and physical, was finite, and while the Entities could pull from a seemingly never ending source, the Gods would only have a limited amount of essence and that most of it would have to be recycled. Essence never went away...When a person died, their physical essence would move to nature, while their spiritual would be used to breathe new consciousness. To help with this, they created planes of existence for the two as well as a third that would act as a sort of 'net' for the essence, ensuring it was contained and not free to disperse back into the void. Essence had weight based off of what it accumulated in one form. If a person had guilt on their conscious, their essence would sink when freed, or if they died in peace and harmony, it was light enough to float upwards.   Above the world was a light hearted, cloud-esque domain, known as The Realm of Light where the spirit could wander in its final days before dissolving entirely. Under the world was fire, darkness, and torment, titled The Realm of Dark. Spiritual essence needed longer time than physical to reset to a natural, malleable state, and often needed what consciousness that remained to allow it to leave, resulting in what some call 'The Great Journey'. For spirits with merry and mirth in their souls, they needed to walk in pleasantries until they were fully finished with existing and ready to let go. For spirits with guilt and woe, they needed to walk towards absolution, often through suffering heavy enough to spiritually justify their misdoings, at which point they were ready to let go.   The third realm settled between the two, casting a shadow on the spiritual world, thusly titled 'The Realm of Shadows'. This realm was like a river, pushing and guiding wayward souls towards their appropriate resting point.   Both the Ciel - Goddess of Life and Eos - Goddess of Death were allowed to create their own wardens and beings to watch over these realms, and to set their own rules, entrusted to their tasks. Once they were settled in, they were consulted for the next few millennia on what other Gods were needed, and after it was done they had created the following:     Their work was done. The Entities could wander and find new ways to exercise and pursue their purposes.

Their world was in the hands of the Gods now.

The Entities grow restless and create the Gods to watch over their world so they can move on. They also craft the Realm of Light, Dark, and Shadow to assist with this.   The newly created, Ciel - Goddess of Life creates Dwarves and Gnomes.

Remove these ads. Join the Worldbuilders Guild
A Story of Beginnings - Ch. 2 - On Matters of Beginnings and Ends
Religious/Deity Myths

This article will be heavily revised and revisited as more Gods and Goddesses are fleshed out and introduced. I wanted to get this chapter out there so I could begin publishing on deities and creating religion for the world.   Apologies if some of the links don't lead to any articles, or articles with very little information. These will be updated soon.

Once again a fine reading, and it's not my first one on this article. Did you consider the summarize to be a drawback if put in the sidebar as a TLDR, or just didn't think of it this way ? I find the links to Eos a bit steep in the middle of the text. Removing the name, or putting "goddess of death" between commas would be better IMO.

Great advice. I'm not wholly sure on how to format article subheads (Like Summary) into different parts of the page, such as under the sidebar panel. Or how to create new subheads for that matter.   I would love to learn.

As far as I know, Dimitris planned to allow the reorganization of templates subheads, but I can't tell when.   I usually fill everything I want in the template to help me focus on some points that I could miss otherwise, then I reorganize everything myself in the freeform prose and add headers there. There are three of them, which is most of the time more than needed.   I do the same in the sidebar content which has already 4 levels on top of each other. I use at least two of them to divide generic informations to the summarize or details of the article content. You can also write in the full footer as a finishing touch, or for very broad texts such as stories.

btw, if you don't fill the sidebar at all, do write everything in the full footer. That would be great for your chapters.

Great advice. When you say 'add headers' do you mean like h1, h2, h3? Or do you have a way to make the headers like in summary?

Yes, those. Tabs in your articles templates correspond to H1 headers. And the boxes themselves are under a H2 header. I don't recall seeing H3 headers in the templates, but I might be mistaken.

I'll definitely play around with it a bit more. Do you know how to resize images? I did a quick test of it all in full footer and it made the image in the article much larger.

Well, so far you can't :D I used some BBcode to reduce just a little bit the size of images, but I can't recall which one, I'll have to check in my articles and tell you.

I'll play around with it. It's getting a bit complex!