Loren Voss (born 168) is the second in command of the Wave Tribe. He is known as an above average Water Bender but his strength lies in his hand to hand combat abilities. He is also the sworn protector of the Chief of the Tribe.   Loren has proven himself to be a reliable and proficient leader. His only failure came at the hands of Tisra, Warlord of the Fire Nation when she murdered the previous Chief in cold blood. He has not forgiven himself for this failure and is determined to exact revenge against the Fire Nation despite his current Chieftess’ wishes. 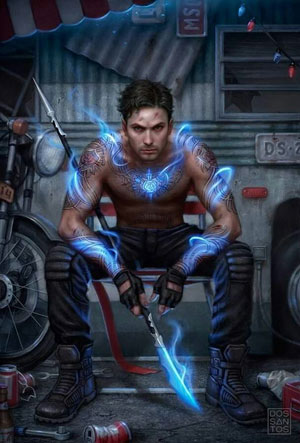 Voss was born on May 12, 168 in Lindenburg, a suburban district in the east side of the Wave District. He is the son of Water Healer William Voss (132 – 191), and his wife, Alice Voss(137), daughter of a cabbage farmer.   Both of his parents were born and raised in Havenstown in the southern Wave District. He has two older brothers, Brav, a cabbage farmer, and Peter, a policeman in the Republic City Police Department.   Voss grew up in Lindenburg where he attended the Neru Institute and then graduated from Levenford Leacock University in 182.