Thevril, the White Lady is the goddess of death & dying, twilight and funerary rites. She is seen as the the keeper and shepherd of souls. When a mortal soul dies, she weighs their actions against their believes and sends them to the realm she deems the most fitting.
If a child dies and has no one - no family or deity - to send them to, she keeps them in her realm, settling them in the impression of a Wonderland, until their souls are ready to move on or return to the world.
Table of Content

Thevril is a very tall and slender woman, deathly pale skin, almost colourless eyes. She is usually depicted wearing a white burial shroud, carrying a handheld sichle in one hand and a small scale in the other.
Her physical appearance in this form is a snapshot of her in death.

While she rarely changes her form, when she visits her Wonderland or children who are afraid of her features, she will take on the appearance she had in life - green tinted skin, long curly mane of moss-green hair, very long pointy ears, crown of flowers and antlers and colourful clothing.
She can also able to change her appearance to any soul residing in her realm, which she also usually uses to easy the pain of passing for those who need it.

The most commonly used symbol for Thevril is a small scale inside of a handheld sickle.

Ways her powers may not be used:

Thevril was once, many milennia and eras ago, just as mortal as those who walk the realm of Avaros. A powerful and ambicious fey, many expected her to reach the rank of Archfey within a century, as her power was close to that of a deity already. Very in tune with nature, she worshipped and followed Nodar, the Decayed.
But then, tragedy struck. With her husband far away on diplomatic mission, her duchy was besieged by abberant creatures and warlords. She died, protecting her home against them. As she fell, she saw enemies storming the castle gates, knowing with her power gone, nothing stood in the way of those creatures going for her children hiding away in their rooms. In her anguish, she pushed all her considerable power towards moving past death itself, fighting to reach the realm of dead and wrested the Scythe of Soul Harvesting from Nodar's inattentive hands.
Now with literal powers of a god, she created a whimsical demiplane within the plane of death itself, reminiscent of her duchy in the Feywild, with elements of stories she used to tell her children. With that accomplished, she went searching for her children's souls, guiding them towards this Wonderland of planes to give them a respite from the death and violence they were witness and victim to.
During her search she came across many other wandering souls that she helped guide to where she thought they should go. If she came a cross a child that wasn't looking for family, she took them by the hand and send them off to her Wonderland as well.

Even after accomplishing her self set task, she didn't relinquish the Scythe. She had seen the many tasks her god was tending too, and how the delicate and painful task of reaping souls was left to a distracted afterthought and bargained with Nodar to keep the task. She also changed the Scythe into a much smaller handheld sickle as well as a balance scale, so she could do more precisely what she had done just on instinct before. 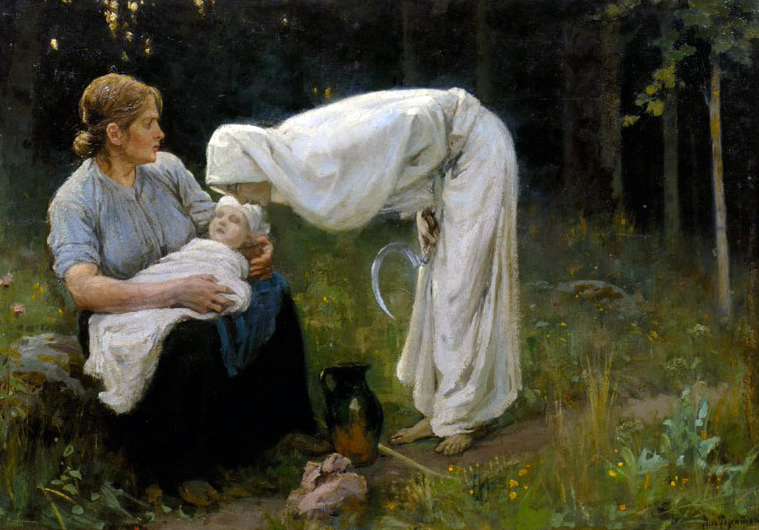