The City of Diamonds

Also called Marri'zine by the Dark Elves, The City Of Diamonds is the second largest city in the in the crimson underground. The city is known as a hub of the Automaton people they were made by the Dark Elves in centuries past .   The city has a large art district due to the Automatons and other former slaves deep respect for the arts as to them it represents how they no longer legion of workers but are individuals. The most common shops and occupations dedicated to the arts are Automaton body art studios, glasswork, jeweler, and smiths.   Arts aren't the only jobs held at The City Of Diamonds they do they also have many mines,shops ,and archeology sites.   The cities non-Automaton population is growing fast as word gets out to freed slaves and escaped slaves flee their owner's wraith.

The holidays of the people of The City Of Diamonds are mostly of their non-Automatons citizen's holidays however, all former slaves celebrate their Liberation Day.

Automatons celebrate they string streamers across the streets and suspend candles and lanterns over them. A 12-hour party ensues, followed by 12 hours of meditation and deep self-reflection.
Most other former slaves have their own celebrations. Dwarves only ones who tend to celebrate with the Automatons though there are members of all the other races who were former slaves decide to do it individually but that's on a per person basis.

The dwarves of defeated city of Var Boldir celebrate by going on a trip to as many food stalls and taverns as possible during the day and at night prayer's are given to many gods mostly goes to Forgemaster as he is considered the head god by dwarves and Windcaster as a god that hates unjust rule .

The common god/goddess worship from the major gods and beings   Forgemaster's god of the craft, light, cooking, order, fire, and fatherhood:
Due to the amount of dwarves and automatons that are crafts folk it is the most common religion of The City Of Diamonds.   Windcaster god of are tempest, tricks, sky, revolution pranks, and creativity
While water and tricks aren't as appreciated by the majority Automatons, but all the former slave worship them in their revulsion capacity and the Automatons love their creativity.   Oceanlilly goddess of nature, life, water, motherhood, and practical knowledge, and passion.
Her practical nature apeals to the Automatons and her motherly role is well respected by all other races.   Wermo goddess glory, heroism ,and invention
Due to the Automaton being a sort of invetion and creation being loved by them she is well liked by them,dwarves,and gnomes.   Astricka goddess of arcana, knowledge for its own sake, and music.
Knowledge is well respected here as well as magic due to fewer naturally talented Automaton mages and music is essentials to many races cultures.   Shental god of the grave
All the organic races praise her for health and a peaceful death.   The Battlemaiden goddess of The Crimson Underground, war, contests, and knowledge of power.
This religion is officially illegal their are still practioners with in the city is a disposed by most Automatons due to their former masters affinity for and the following.   Fiends:
Hated even more than The Battlemadien due to Warlock pact of the fiends cruelty to the former slaves.   Other beings of worship of note:

Marri''ruedoll or City of Rubies

The City of Diamonds is the most common place to find Automatons. The City of Diamonds is run by a council of ten Automatons any ties are broken by the eldest Automaton Dancer 96. They were founded after the Dark Elves were kicked out they are the oldest surviving Automatons after the first war.
Automatons have two levels of law:the city laws which every race must follow and laws created by the minority council of the other races.Their is some conflict as the other races feel like they there should be one big council that makes joint distinctions.
The Constables of Diamonds are the police of the City Of Diamonds any race join as long as they have been a citizen for ten years they spend five years in training on how to deal with stressful situations

The City Of Diamonds2033 (896 years ago) was founded by Mizz'ri Thorne'dar was looking for a place to settle with her followers after the Dark Elf city, Mizar'doll or The Place of Pearls as it was also known fell to human retaliation after one to many raids. It slowly grow into a small town until living metal was discovered for the first time in the cavern walls a material which could move with instructions after being charged with magic similar to living stone and living wood the first Automatons were built here because of the this discovery.

The discover of living metal and the new construction of more advanced machines to make more complicated Automatons caused immigration to the city to grow very fast and by 2502 the city was at its largest shorty before its down fall due them building Automatons that were more and more intelligent and those more sentient. 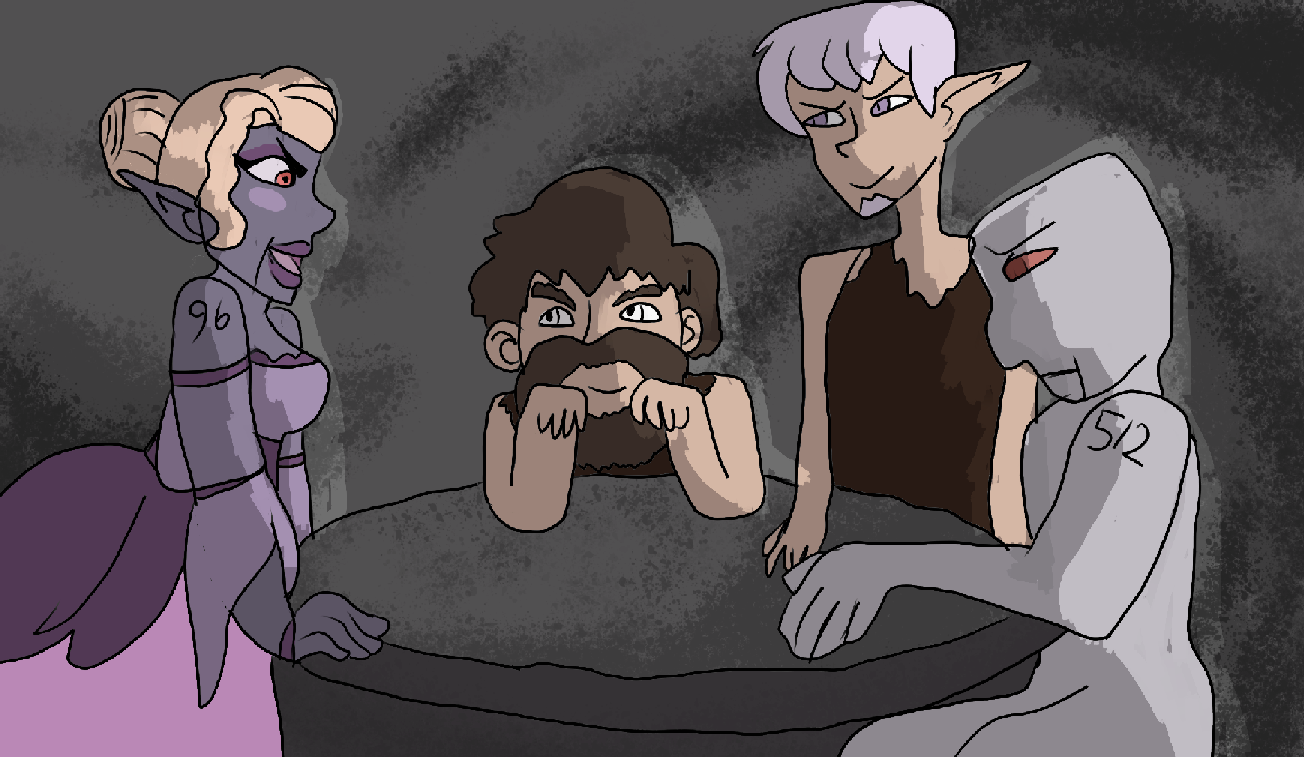 In 2560 Construct 512, Dancer 96, and Fighter 1600 slowly began plotting a revolution as they recruited for a day of liberation both Automatons and other enslaved peoples such as Orcs, Gnomes, Surface Elves and Dwarves. Their revolution was successful though there was a significant loss of life they took over the city after a few days but fellow Dark Elf settlements can to the defense of The City of Diamonds but it was fully taken over in a month (little over 366 years ago) in the year 2563 they also kicked out the Dark Elves at this time.

Sometime around 28 years after Dark Elf's control of The City of Diamonds was lost some Dwarves moved in after the Var Boldir stronghold fell and the Automatons gave them space in the city as a sort of an apology for behavior under Dark Elf control. taking the Dwarves in during their time of need greatly improved their relationships with all the local dwarven strongholds and to dwarves in general as they had not much experience with the freed Automatons.

Around the same time, The City of Diamonds sent out its first diplomats to the surface first to the nearby human settlements at first it did not go well as several were destroyed until local Dwarves stood up for them because the Dwarves of Van Boldir were taken in by them. Humans settlements under threat of lucrative trade deals being canceled begrudgingly started listening to the first diplomats leading to less hostility as they eventually started to grasp them were not like their former masters and were just new folks in the area.

The City Of Diamonds is in The Crimson Underground a dark subterranean place .The defining feature of The City Of Diamonds is at the cities center a glowing giant 10.6 meter tall or 35 feet tall and 4.5 meters wide or 15 feet wide diamond hanging for the cavern celling.
Founding Date
2033 (896 years ago)
Type
Large city
Population
Total Population: 55,000
Inhabitant Demonym
Diamondites
Council of the Forged is the governing body: Head of Government: Dancer 96
Government System: Gerontocracy
Currency: The Crimson Shells is it the most common currency of the Crimson Underground.
Legislative Body: The ten oldest Automatons vote on city matters, Dancer 96 breaks ties as she is the oldest.
Judicial Body: The Constables of Diamonds


Remove these ads. Join the Worldbuilders Guild
The City Of Diamonds