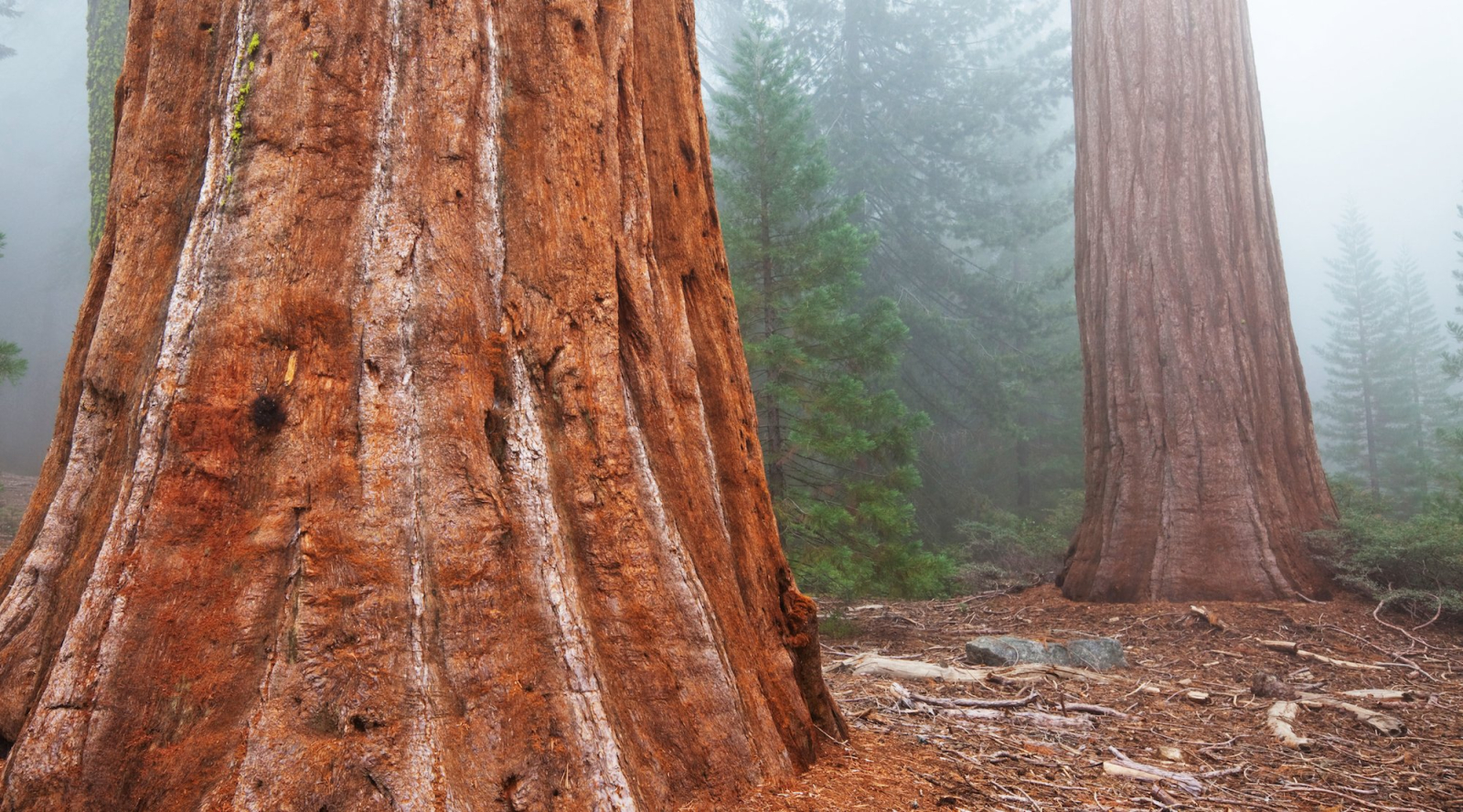 Sekwoyoday (Sek for short) are a group of trees known for their magical properties. They are the first species to develop civilisation, art and digital watches (although they can’t actually manufacture them). Used as a way to channel the natural energy, they are frequently found as the wood in Wizard's staffs with their most notable use being the 9 trees that create the tower in the Magick Guild of Birkhindon.
Sek are the most ancient race and when roused they can be the equivalent of 500 men in a fight. They can control the amount of oxygen surrounding them by changing their rate of photosynthesis, stopping fire from being able to harm them, but this slows them down considerably. They also can cause floods by releasing the large amounts of water they hold in their trunk like bodies. 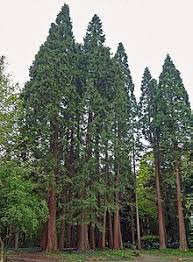 by Sverrir Mirdsson
Their only main danger is falling. They never stop growing and if the ground below them collapses they will fall to the ground and die. Another thing that can cause them to fall is if their roots rot or are eaten away.

As the only species of tree with sentience they are something of a rarity. They appear to be ordinary trees but they have are more like bipedals. This has led to a strange deal with the Wizards. The Wizards help them thrive and grow, protecting them for other races and in exchange the Wizards gained their magical capabilities by being allowed to harvest small amounts of Sekwoyoday wood.
In the Magick Guild of Birkhindon the trees support the actual building. The building starts as a doorway with a spiral staircase leading up to the trap door and the university. The 9 trees (the sacred number amongst the Sek and hence the number of magic) surround the stairway creating a wall up until it reaches the university where they spread out and support the weight of the university.

As a Sekwoyoday grows it forces minerals that it draws from the ground and are often poisonous into its bark where it can't damage the tree. These minerals tint the bark red but more importantly help the Sekwoyoday to become resistant to fire. Another way Sekwoyoday deal with fire is by controlling the amount of oxygen in the surrounding air. For short amounts of time a Sekwoyoday can force it's photosynthesis to stop and this helps choke the fire. It should be noted however that this can be more damaging than the fire if it is done frequently and for too long a period.

Sekwoyoday begin their life as seedlings and go through all the common stages of other trees growth (seed, sapling etc.) They gain sentience as a sapling but seem to be able to choose where they grow even as a seed.

The best environment is somewhere that occasionally has wildfires but is cold during the winters.

Their main use is for magical races. Aside from the race's own powers the Sekwoyoday is the giver of magic. It enables and enhances a wielder's power and channels the energy with all other life. People assume that they are ordinary trees but people often find themselves having being beaten by the branches if they get too handy with an axe.

At least equal to that of a Wizard. It is difficult to tell though which are more intelligent.

The five common senses that are well known to the bipedals don't exist for the Sekwoyoday. They are the most ancient race and their closest sense to ours is a form of touch. It matches ours and but damage to their epidermal layer and even dismemberment of limbs seems to affect them less. They are also light sensitive and will move towards the warmer areas. Their method of sight as well is most peculiar. It is not fully understood but it appears to have a group of bipedal-like eyes somewhere along its trunk in an area that seems to be a face.

Whilst Sekwoyoday themselves don’t traditionally move, younger saplings have been known to offer their wood in exchange for replanting in a newer area or forest. This is where many traditions and rituals are beginning to appear. This includes a form of hand shake where branches diagonally opposite from each other touch and what appears to be a raised eyebrow where a cluster of leaves raise above another.

One of the main taboos in Sek culture is moving from your sproutplace. Older Sekwoyoday view it as a sacred ground that allowed you to be born by pure chance. When younger Sek move it is both deeply embarrassing to the surrounding elders and also painful to watch one of their own leave.

Sekwoyoday are worshippers of fire. Their shortened name (Sek) in common tongue means cold fire. Fire is incredibly beneficial to the Sekwoyoday. It clears scrubland and shrubs which otherwise would choke saplings and allow new Sekwoyoday to grow. What is a devastating wildfire to other species is celebrated by the Sekwoyoday as a time of growth and renewal.

Hunted by most bipedals but work with a few races of them to survive and in return they are granted magick. These most prominently are Nomads and Wizards. As part of a Wizard’s education they must fashion themselves a Sekwoyoday Staff until this has been done a Wizard can’t graduate Tovar’s become a fully fledged magick user.
Scientific Name
Sekwoyoday Magickii
Lifespan
900 years
Conservation Status
They are AWOL in Alatar but are common in the rainforest on D and farmed in certain areas of Main
Average Height
70 metres
Average Weight
25 - 35 tonnes
Discovered by
Kozilica

Hello! thank you for your entry. I found it interesting to have a species of sapient trees, and their possibility to be raised as guardians.   If you have some time, I'd suggest you add a few more information, and give a bit more details in your sentences. Your article is highly divided into sections, some of which are only one sentence long.   As for the content, I noted you indicated an average mass of 2-3 tons for the trees, that seemed a bit low. Is that for these 70m tall trees? Because I calculated that for a trunk to reach 70m and still only weigh 3 tons, it would have a diameter of only about 60 cm. As an indication, giant sequoias reach diameters of 6 or even 8 meters, and weigh hundreds of tons. They are also taller than the Sekwoyoday, but still: I'd suggest you pump that mass up a notch, maybe 20-30 tons to have a trunk at least 2 meters in diameter ;)   Also, you said the trees are worshipping fire. Isn't that a bit of a death cult? I mean, fire burns trees a bit. That's a very interesting take, definitely! It may need a few more details to explain, though.   Any way, good job!

Hi there, Thanks for the feedback. For the weight I wasn’t very aware of what the weight would be and will increase it as advised. I will begin to develop their religion further as well. My idea for the worship of fire in the Sekwoyoday came from the way Redwoods are positively affected by fire as it increase the are for new ones to grow and their bark is resistant to it. Thank you for taking the time to read this article and give feedback as well as this is my first article that I feel has made substantial progress from previous ones.

Very nice concept for a tree. The magical uses and the sentience of the trees are certainly interesting. I also liked how it was actually incorporated in the Magick Guild building. Their fire suppressing abilities are pretty nice as well.   I would however suggest to perhaps not use the predefined sections of world anvil and make your own ones since some are pretty short at the moment. In addition I think you should read the sentences again a bit because some are rather strange. For example 'They are seem to many to be like ordinary trees but they have are more like bipedals than trees.'   I think this should be 'They have the appearance of ordinary trees but they are actually more like bipedals'.

Thank you for the feedback as this is the first major article I have done both for a competition and just as an ordinary article. I will use your suggestions to further develop the Sekwoyoday and future articles. Thanks again

I really like that the Sek have such a positive relationship with fire. That was pleasantly surprising.   I found the part about the 9 trees a little confusing. Are there only over 9 Sek at one given time, or are there more of them in your world but only 9 surrounding the university?

Just 9 surrounding the university, the Wizards have found that the number 9 provides the strongest natural magic power. There are a lot more in forests in northern parts of Main

Nice article! Those are interesting sapient trees :D   Here are a few notes I took while reading:   " Sek are the most ancient race and when roused they can be the equivalent of 500 men in a fight" Wait, are they sentient? I think you need to mention that before.   " The 9 trees (the sacred number amongst the Sek and hence the number of magic) surround the stairway creating a wall up until it reaches the university where they spread out and support the weight of the university." That means that those trees can't move right? Do they not get bored staying there at all time?   This is interesting mechanisms that the trees use to protect itself from fire.   Do the parents protect the saplings and stay around them, or are they left alone from the moment the seeds fall from the parent tree?   " their closest sense to ours is a form of touch." Do they use their branches to touch things? Do they do "handshakes" by touching each other branches? :D   I love that they worship fire.

Thanks for the input and ideas, Part of my inspiration for these trees is Terry Pratchett’s Counting Pines. So rather than being like the Ents and moving around they are more stationary by habit possibly like how Treebeard describes the Ents who are in a slumber where they just stand still for centuries. The trees would be quite content rather than bored. I haven’t considered parent/child relationships yet but will add it to the article. I will add the part of the sapience earlier on. Love the idea about tree handshakes the idea of that made me smile and I will add some form of that into the article if that’s alright with you? Thanks,

NO problem with you using the idea XD Glad you like it and found my comment useful!

Thanks for all the feedback and support I’ve had in this article it is my first entry to a competition and the feedback so far has been incredibly positive and supporting. :)

I like that for once, wizards actually made a deal instead of being filled with hubris!