The Alliance of Lombardia is a group of self-governing city-states that have united together as a political force in order to counter the tremendous pressures around them both from the mainland as well as the rest of the Mediterranean. Each city-state competes with one another economically and sometimes politically viciously, yet culturally they unite under pressure to threats external to the Remen Peninsula. This shared history of once being part of the greater Remen Empire gives them common ground from which they seem to continually return to one another and resist having wedges driven between them.


At the end of the Remen Empire each of the city-states of the Remen Peninsula were signatories of the Aequam Divisionem. The document carved up the territories of the dying Empire, and put power in the hands of the Governors and Generals of the provinces. Peace between them was not at all a foregone conclusion. The Empire was disassembled and the power vacuum was too much temptation for some. Wars broke out periodically between the city-states which fought over resources, perceived slights, and trade, eventually resulting in the modern borders today. However, after a time, external pressures from the Empire of the Phoinix , the Eastern Kingdoms, Aquitaine, and other Mediterranean seafaring nations forced the city-states to sign the treaty of Lombardia. 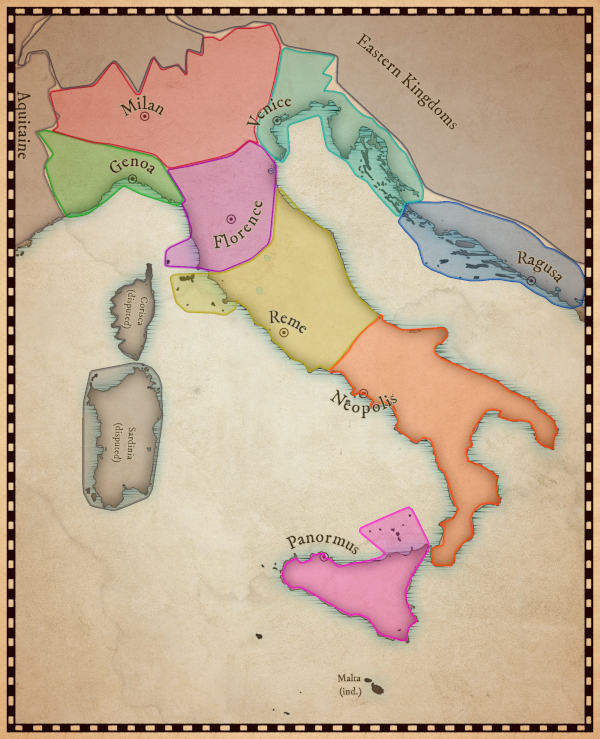 The Treaty of Lombardia

The Treaty of Lombardia lays out an alliance between the city-states for mutual defense, dispute negotiation, and an office for foreign relations.

First and foremost, the treaty forbids the City-States from engaging in military conflict with one another. While wars between merchant houses are not strictly forbidden, personal guards above a certain size are considered armies for the purpose of the treaty. Each of the city-states is to keep a levy available of a certain percentage of troops they have in permanent stations, as well as being responsible for raising more as needed. In the case of a war, a General is elected from the assembled body of city-state heads and placed in charge of the assembled forces. Monetary penalties are stipulated for failing to provide the required men.

The Council of Lombardia

Each city-state selects one representative for them on the council. These meetings are completely private. The council functions both as a guide for the vision of the alliance as well as functioning in any other political need it sees fit. This is not to say that it overrides the sovereignty of the city-states

Disputes between city-states are resolved by a tribunal of judges chosen from 3 other "neutral" city-states from within the alliance. These judges are chosen by the office of the Doge. Most disputes do not enter this stage and are often worked out (through politics and occasionally by assassination) long before they reach the need for arbitration.

Office of the Doge of the Alliance of Lombardia

Banner images are all either my original work, or sourced from Pixabay.com or purchased from stock.adobe.com