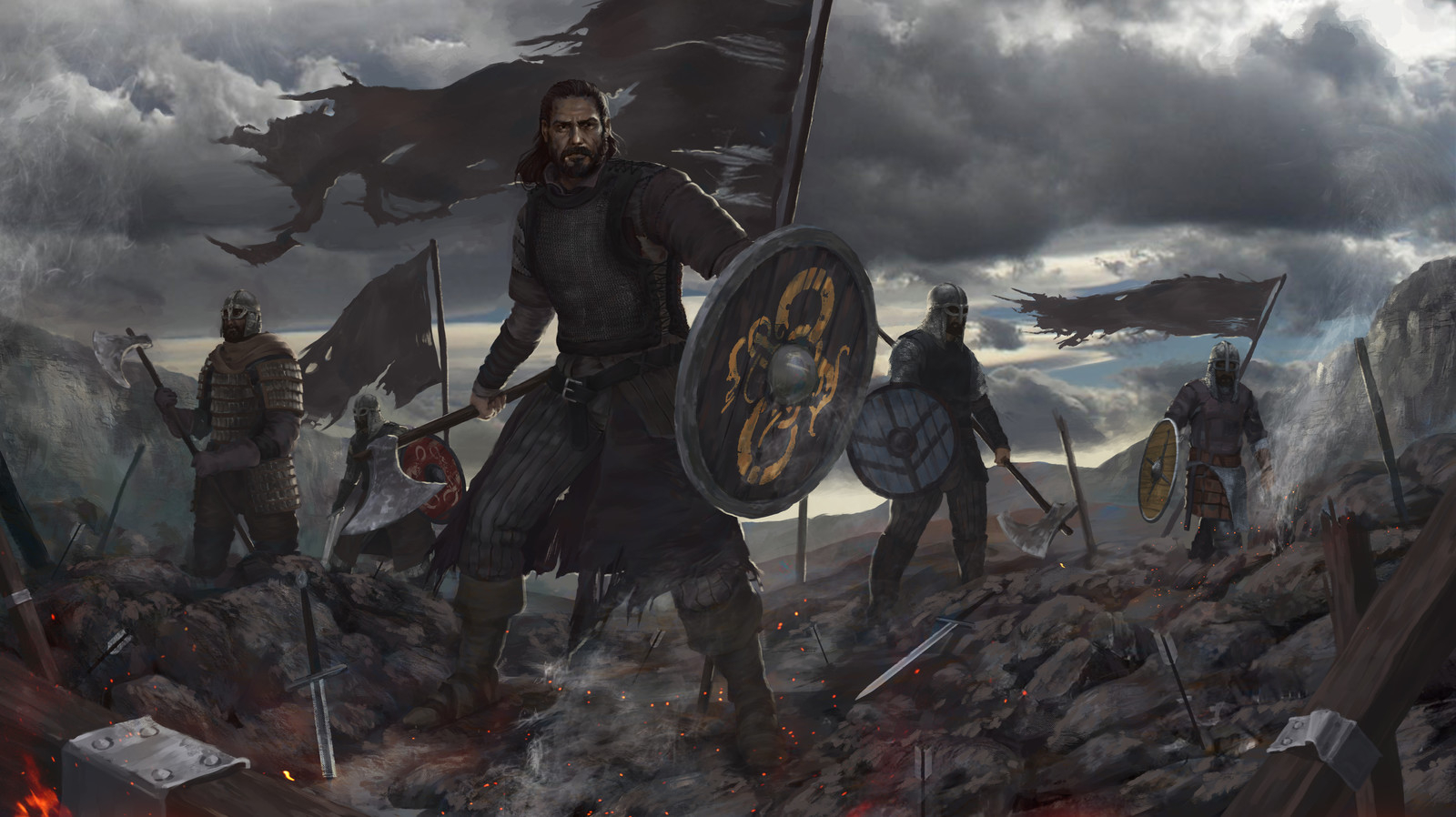 Clan war of the Wandering Bride

Header Artist - Alex Bezhko - Artstation.com   The Clan War of the Wandering Bride, was started by a conflict of duty vs love.   The tale begins with the daughter of the master armorer of Clan Skangar named Inga. Inga was of great beauty, and her hand in marriage was greatly desired. All marriages in Skandia have been brokered by the fathers and approved of by the Clan Leader. Arrangements for Inga have been made for her to marry Sigurd, a powerful warrior, who in time may find himself in a position of command.   One day, a soldier from Clan Valsungar arrives at the master armorer's forge to purchase a suit of boiled leather an mail, that the armorer has become famous for producing.    While being measured for his dimensions, Inga arrived to the Armory to talk to her father.   Inga and the soldier locked eyes, and were immediately lost.    The soldier returned to his clan that day, without his armor, but with Inga instead.   Sigurd became enraged when the townsfolk told him that Inga was seen leaving the city with the dashing young warrior.   He went to his warlord father, and rallyed the full strength of Clan Skangar to retrieve his rightful bride, and put this  warrior to the axe.      Upon returning to Clan Valsungar, the warrior and Inga went before the Milo the Bonebreaker, and told him what they had done.    Inga told him that her father had sold her to Sigurd, and that she hated him.   She told Milo that she was inlove with the young warrior, and that if she can not choose who she loves, that she would rather die.       Clan Valsungar values the women, and believes them to be equals.   A marriage must be agreed upon by the husband and the wife.    Knowing that Clan Skangar doesn't share these views, and that they are likely going to demand retribution, Warlord Milo, calls his berserkers and soldiers to prepare for battle.  There was no little love between Clans, and it appears the time has come, for the score to be settled.  Inga and the young soldier retreat to the mountains, to hide in the safety of the lake district, while the Clan marches to meet the enemy in the field of battle.   For two days and two nights the fighting raged.  When all was said and done, the Clan Valsungar was nearly defeated and forced to retreat.    Clan Skangar also suffered heavily and did not pursue, allowing themselves time to prepare for the next battle.    Warlord Milo, knew that his people would not survive the fighting if it were to continue, so he decided to take the drastic step to protect his clan.        They took to their ships and ventured out into the rough, could Storm Sea, in search of new lands for Clan Valsungar to start a new way of life.    After days at sea, in battling the choppy waves, and dense fog, the ships arrived in the new eastern lands.   The shores were perilous and rocky, sheer cliffs falling hundreds of meters into the sea.   They followed the coast south looking for a place safe to land, the further south they got, the better it looked, the cliffs gave way to hills, and eventually a  large protected bay opened up between to spits of land.    Milo led his people into the bay and came ashore near a small village on the shore of the bay.   They were not welcomed by the strange, small dark skinned people that lived in this strange land, and another battle broke out.   This one was much different.    Milos berserkers easily ravaged the tribe, and they fled into the forests.    Milo took the village and burned all except for two buildings, a temple, and a healers den.   He named the lands Valsgard, home of the Vals, after his Clan Valsungar.  Warlord Milo, titled himself Emperor of these lands, and this would be his capital settlement and would be known as Ringvolstad.

Relations between Clan Valsungar and Clan Skangar, had always been strained.    A warrior culture prohibits little friendliness among Clans.   The culture of Skandia, utilizes arranged marraiges to form

The slopes of Mt Kragge became the backdrop for the most brutal Clan War ever seen in Skandia.

After fighting stopped, both sides agreed that Skandia was not big enough for both clans.   The old grievances were not easily forgotten, and neither side were willing to give in to the other.   Olaf Bonebreaker, Cheif Warlord of Clan Valsungar, decided to take his Clan and leave Skandia in search of a land free from strife for his people to live as they choose.   Soon after his ships landed on the shores of the massive forested continent, Olaf Bonebreaker declared himself Emperor, and named this new land for his Clan.  Valsgard.

Skandia and Valsgard have developed away from the  Clan lifestyle into two competitive  empires.   Age old enemies, still hold each other in contempt, while engaging in trade and commerce, neither empire trusts the other, and over the centuries there have been countless skirmishes over territory and resources, and acts of piracy.     Wars have been fought, and the empires have grown in size and power.    Valsgard is far more rich in resources and thus has flourished more than the Skandi have.
Conflict Type
Battle

Answering: "Describe the events of a conflict that started due to unusual or unforseen circumstances."
Visit CaseyJones's Competition Page Check all other answers to this prompt Competition Homepage

Oh no, poor natives!   I can definitely see why this led to war. The clans had such different ideologies there was no way it wouldn't do.