Land of horse and bow

My forefathers gave the Rühm everything we have. We were once mangy steppe dogs, eating from the scrapheap outside the walls of civilisation. We are now a pack of wolves with land to call our own. Any of you who question me are free to give up your land and head back out into the great grass. I will not follow him, I will not hunt him. Those of you who stay here, in this land won by my forefathers, do so under my hand and my law.

Situated on the continent of Eldvar, in the semi arable lands on the eastern edge of the Realm of the Horselords sits the Kingdom of Rühm. North of the rugged Torisar Mountains, south of the great northern forests, home to the Elven Kingdom of Arellä and west of the settled lands of the The Kingdom of Olrion and The Kingdom of Amnor. This mainly flat grassland is well suited to the nomadic horse tribes who live here, while some areas contain soil just rich enough to support farming. 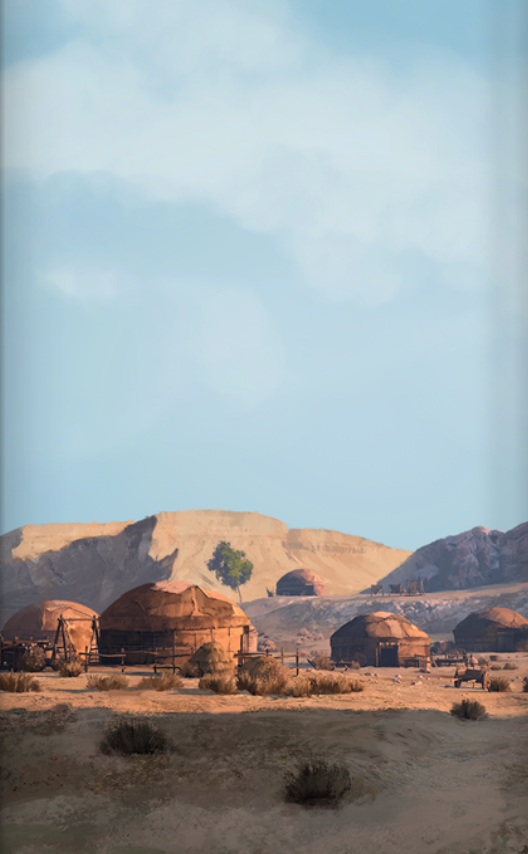 Khikan - A trading town close to the border with the Kingdom of Amnor.   Meden - A border town with the Kingdom of Olrion.   Râva - A walled and fortified trade city deep in the heart of the kingdom. The unofficial capital and home to the ruling clans.   The Sward - A region in the east of the kingdom where the soil is cultivable enough for farming.

The Rühm coat of arms is two horses fighting each other on their hind legs. It's an ancient symbol of the Rühm tribe and has been the official sigil since the kingdoms formal recognition in 755.

Nearly a thousand years ago, the westward expansion of The Avartian Empire the met the great sea of grass, an immeasurable steppe the Elves simply called The Expanse and what is now commonly referred to as the Realm of the Horselords. Beyond that, with no farmland where the imperial legions could forage, they could conquer no more. The empire fortified their newly settled lands, and built castles and watch towers on the steppe's edge, confident that the disorganised horse tribes beyond the frontier posed no major threat. Rühm, Aizât, Kuĝhur, Tarakan - imperial officials barely even bothered to learn the names of the various clans and peoples, except when it was necessary to turn one against another with a bribe, or remove a rising horse lord with a vial of poison. 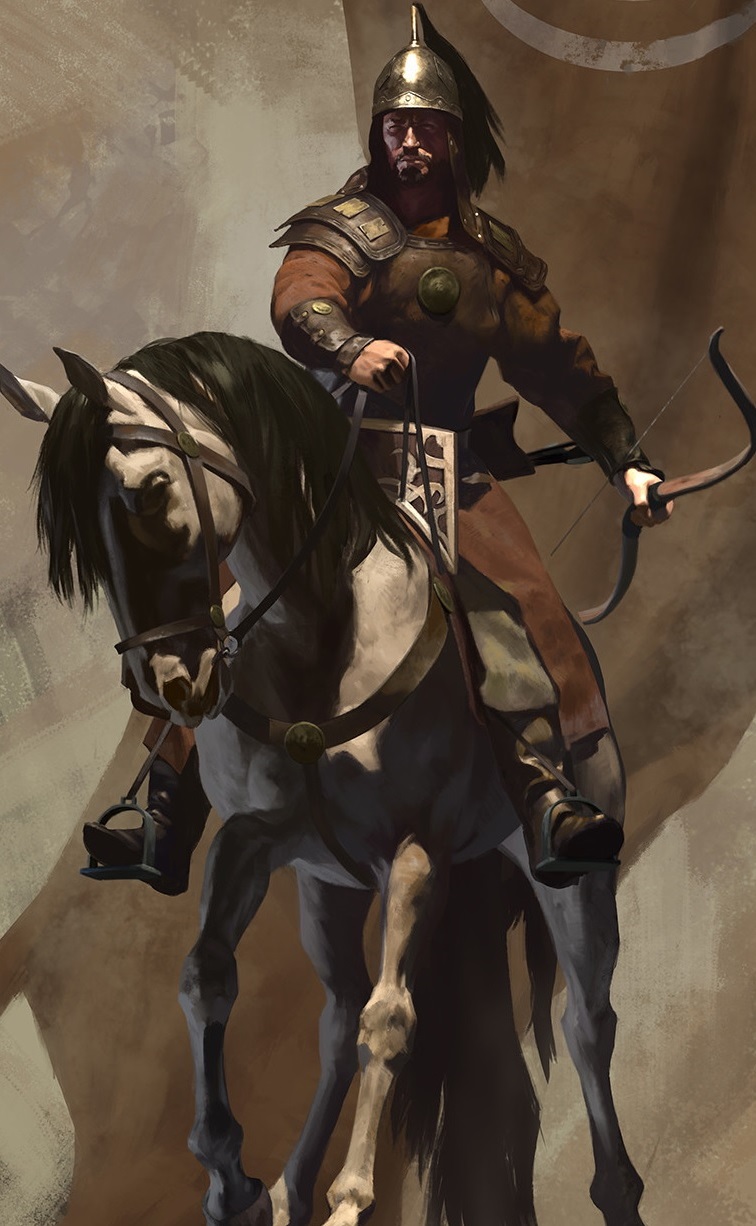 A veteran Rühm horse archer
They were collectively known as the horse folk, and for centuries the Empire toyed with them, playing one tribe off another so that no one horse lord could consolidate enough power to be considered an actual threat. The tribes were happy to play along, and an imperial title, a princess bride, or a chest of gold could give them a slight edge in the endless struggle for prestige and superiority. They raided, traded, took protection money, and left the game of conquest to the settled peoples. However once the tide of empire ebbed away, the smaller kingdoms that emerged in its wake were suddenly left exposed and vulnerable to the nomadic horse tribes they once derided. After a series of vicious raids that cut deep into the newly established Kingdom of Olrion and Kingdom of Amnor's land, both kingdoms eventually came to an arrangement with the tribes living the edge of their territories. They each carved off a piece of arable land on their western frontier and offered it to the most powerful clan at the time, a people known as the Rühm. Along with this land, each year ambassadors from the two kingdoms would journey west into the steppe to meet with leaders of the Rühm tribe. These leaders and their retinues were given numerous gifts so that they would keep the two kingdoms informed of developments in the steppe, and when requested, attack those who threatened their interests. For a time this arrangement suited the Rühm, and over the years many of them gave up their nomadic way of life, building permanent settlements and transitioned into an agrarian society. The arrangement wasn't always an easy one however, often the Rühm would demand more 'gifts' and even when appropriately bribed could not always be relied upon to fulfill their side of the bargain. Although now rare, the occasional Rühm raid into Olrion and Amnor was not unheard of and settled folk in the borderlands were always wary of their unruly neighbours.

Over the past year, merchants and ambassadors who travel into the Kingdom of Rühm speak of a change in the winds on the steppe, as though something is happening in the far west of the Realm of the Horselords. More and more tribes are heading eastward, and some are hearing whispers of a terrible but distant conqueror. Whatever it is, the horse clans are set in motion and new tribes are pushing eastward, seeking fresh pastures. These new tribes are going to be unwilling to be crushed in the middle, and even the leaders of the Rühm are fearing something big is coming their way.

Although referred to as a 'kingdom', the nation of Rühm bares little resemblance to the other monarchical kingdoms which share its borders. It is headed by a High Chief, who is elected by a council of clan elders from the various tribes that make up the Rühm confederacy. The current High Chief is a high born son of the one of the most prestigious clans, a man by the name of Azlar. The High Chief collects tribute from subordinate clans and in return allocates territories and grazing pastures within the kingdom to the various tribes in accordance with how much tribute they can pay.   Although the vast majority of the Ruhm still come from the Horse folk cultures of the Eldvar steppe and practice a nomadic lifestyle, herding cattle from one area of green pasture to another and conducting raids on neighbouring territories. Integration with their Eldvari neighbours means that many of the Rühm are giving up that traditional lifestyle and are more inclined to adopt a sedentary way of life, building towns and fortresses, tilling the soil, and planting gardens and vineyards. 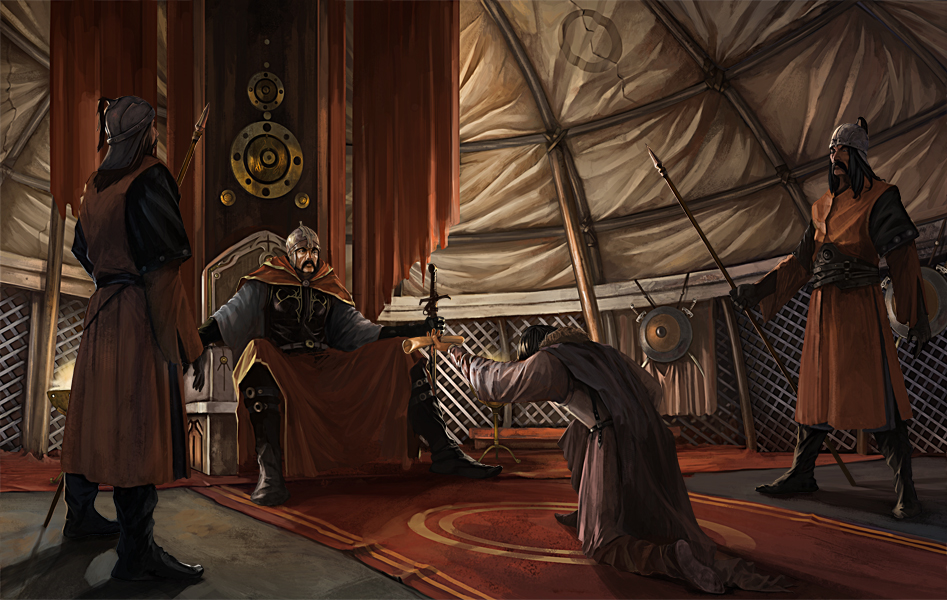 A visitnig ambassador pays tribute to the High Chief

Like most Horse folk, the people of the Kingdom of Rühm practice a form of tribal shamanism called Khiramun. Each tribal clan usually has a revered shaman that performs ceremonies, omens and ritual healings through entering an altered state in order to contact spirits and gods in what they call the "otherworld". The Khiramun pantheon contains a number of gods and godesses mainly associated with the seasons, war and death as well as a creator goddess called Sokhatai, who is half woman half horse.

Since the time of the Avartian Empire, the horse folk of the Eldvar steppe encouraged trade and exchange with their settled neighbours. Foreign goods are highly valued commodity in horse folk culture and trade and the collection of tribute are the major sources of income for the Rühm. Tariffs and taxes are collected by travelling merchants, who instead of gold will usually pay at the border towns with furs, silks and other goods. The kingdoms of Amnor and Olrion still pay a yearly tribute to the ruling clans, in return the Ruhm offer safe passage for their merchants, a non aggression pact and when requested will direct their attacks to other more hostile nomadic tribes who live on the steppe. Many Rühm still offer their services and act as guards for travelling merchants and caravans who journey through the kingdom to trade with the various tribes who still live on the more untamed steppe beyond.   The main export are the hardy steppe horses, and foreign kings from lands as far away as Venthir pay hefty amounts to own a steed that was bred and trained in the kingdom of Rühm. 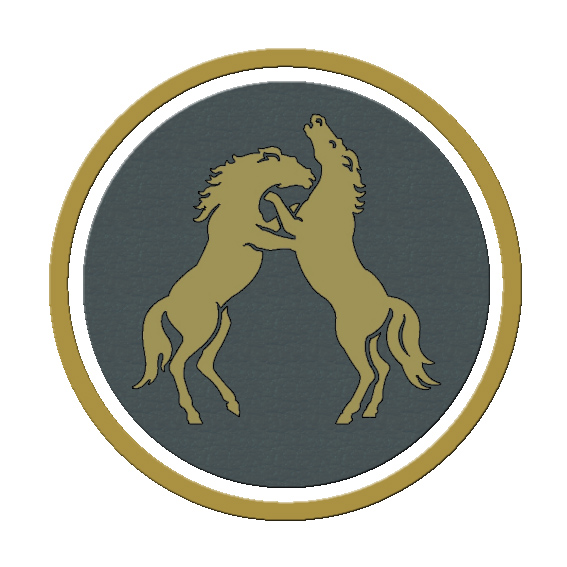 No friend but horse and bow.

Like most nomadic horse tribes in fantasy writing, inspiration for the Rühm mainly comes from the nomadic peoples who lived on the Eurasian Steppe during the ancient and medieval times. Special mention goes to the Khazars, Petchenegs and Bulgar peoples who lived on the borders of the Byzantine Empire and interacted with these settled people in much the same way.