Essentials on: The Vastoyan Republic

The Vastoyan Republic is a place of coal, iron, and blood. It grew from a long stretch of land on the Frozen coast to its current state between the early Tree Blight era and around 600 Dragon Blight. The Republic controls land from the Frozen Coast in the North East to the Dolnya Mountains of the South West in the northeastern most regions of Piros. Its population, with a human majority and significant dwarf minority, ranges near to 4.3 million souls. As of 1200 DB, the Vastoyan military has been experimenting with powder based weaponry making themselves known across Piros. At the center of it all is Reknygrod, capital of The Vastoyan Republic and City of Valorous Deed.

Soils of the Frosted Lands

Geographically, Vastoya is the largest singular nation in the continent of Piros. As of 1341 DB, the Vastoyan Republic has both gained and lost Empire status after its annexation of Lidovàn Sovereignty member Proseva followed by the subsequent defeat and loss of the territory to retaliatory action by the Sovereignties. Still, the Frosted Lands boast an impressive size that spans between two mountain ranges and along several hundred miles of coastline.

The lands of Vastoya are given their title for good cause. The Frosted Lands are largely arctic conditions varying between impassably cold peaks to frozen woods and frost ridden fields. However, certain regions experience a reprieve from the frozen conditions due to hot spring activity such as the Hot Springs of Durnyol. Because of the cold climate, only hardy crops grow leading to the common misconception that Vastoyans would have no taste at all if bitter things did not exist. The growth season of Vastoya is commonly short, spanning from the First Quarter of Bount to the Last Quarter of Autumn. The other parts of the year remain cold and snowy, often making the mountain passes impassable. During the Frost Season, it is common for rivers to freeze over enough that they can be traveled upon by foot. This has made intra-national trade convenient and allows for resources to be spread across river settlements when needed.


Blood and Iron: History of the Vastoyans

The Frosted Lands of Vastoyan territory have long been the grounds of bloodshed. The early days of the Tree Blight saw the corruption of most of the Frosted Lands. The humanoid refugees were forced north into tundras. Those who survived the northward exodus eventually made their way to the Frozen Coast. The region held ample resources including large seams of coal and ore embedded in cliff sides. With this icy haven secured the refugee tribes created a solemn solidarity against the dark. They formed the military state of the Vastoyan Republic with the sole purpose of stamping out the corruption.   The Dark Wars saw Corps of Vastoyan military push back through the tundras into The Frosted Lands. They gained a foothold when the Vastoyan Corps happened upon Dwarfkin of the Khust Mountains who had been fighting against foul beasts since the beginning. With their aide, the Vastoyan Republic took form. The nation carved into corrupted woods and mountains. By the end of the 5th Dark Wars several millennia later, the Republic had reached the Dolnya Mountains in the west of the Frosted Lands. This solidified the territory of the Vastoyan Republic of today.   The Iron Revolution began as the 5th Dark Wars closed and still goes on today. With the introduction of mass steel production, the Vastoyan Republic has become a hub of trade in steel and steel products. Even as the military has been refit and rearmed with the invention of Fired Powder. This has created a militaristic renaissance as new designs for weapons and armor appear continuously. Smoke houses are quickly becoming commonplace as cities industrialize.   To know the Republic is to know it's people. Solemn, militaristic, brutal; all words that can describe the Vastoyan government. The people have little say in which direction the Republic goes save for their elected officiate. Almost none have access to the proceedings of the Konsulate. At the head of it all is Chancellor Solvari Preskov, leader of the Konsulate and head of administrative affairs. Citizens under Preskov's leadership have seen rapid expansion of industrial power as well as rising tensions with the Lidovàn Sovereignities.

The Steel Dener: Economics of the Republic

In terms of economy, no one can match the steel production of the Vastoyan Republic. Iron and coal come in large supply in the mountains and hills of Vastoya. Merchants and trade caravans will often stock up on furs and steel products in exchange for cloth, food stuffs, and alcohol. However, it is no easy task to get into Vastoya. Checks, inspections, and tariffs are expected on entry to and exit from the borders making trade not so lucrative against other states. With that said, Vastoya still maintains some of the safest roads in all of Piros and boasts a strong economy to support them.   As of present day, trade has become more difficult due to increased tensions with the Lidovàn Sovereignties. War and Reconciliation has left both states placing tariffs on each other in major and minor exports. To make matters more complicated, the introduction of Dragonkin into the world has left many nations reeling which in turn has affected supplies of trade goods not affected by tithes.

Rules of the Rulers

Since it unified on the Frozen Coast, The Vastoyan Republic has been ruled by the Konsulate Superior with a Chancellor at its head. Very little about Vastoyan life goes without the Konsulate's influence. Cities are planned and built under its supervision while population is accounted for by government registrars. This system is in turn controlled by the population who elect Konsuls from the various regions. These elections happen every 5 years between regional leaders with the population deciding on the best candidate.   As it is, the government of the Republic can be most accurately described as an electocracy, where citizens have little control over the ongoings of the konsulate outside of the elections of officials. Due to the nature of the Electoral process, it can be described as oligarchic in nature. Nevertheless, the Konsulate is made up of 12 Konsuls which include a Chancellor who changes every term.   Despite the common idea that the Konsulate is all powerful, other groups do hold major sway in the decisions the Konsulate make. The merchant families of Vastoya hold major sway in economic decisions while the Azurite Archives utilize their archivists as lobbyists in magic related decisions. Even outside the Konsulate Superior, the merchant families hold power in the cities and towns of Vastoya. This has led to tensions in the past which ultimately led to power being spread out from the capital to the cities. Cities now have begun planning their own development with only cursory supervision from government officials.   Lower in power, the Church of Silver Threads holds large public sway. It utilizes this power to promote a style of religious determinism that few other nations can match. Because of this, the Konsulate often hosts ceremonies to promote religious ties to the government as an act of public favor. There are also several mandates in effect that directly benefit the church.   Beneath them, more properly behind them all stands the Hunters. A secretive group of information and extermination specialists, The Hunters of Vastoya represent the shadowy hand of the people. They work outside the general purview of government and recruit on a selective basis. Their purpose is to expunge corruption wherever it may be. This mandate gives them wide power politically and serves as a constant reminder that even the citizens of Vastoya can be in league with darker forces.

Demography of the Republic

The Vastoyan Republic is primarily a human nation. Roughly 78% of the population is human with a large dwarven minority of 17%. Nearly all of the human population is descendant of the Ospvår refugees. Most humans live in and around the cities or towns of Vastoya that rest near rivers on large flat lands while dwarves tend toward their mountain fortresses or hill-set villages. The exception to this is the city of Vàrgang which spans a solitary mountain and acts as a tunnel on a major trade road.
While most other races are rare; Elfkin, Half-breeds, and Tieflings are all decidedly rare and Dragonkin are non-existent. And while the elven groups are more accepted both Half-Orcs and Tieflings are widely treated as second-class.

Iron within, Iron without: Vastoyan Society

Vastoyans are as stoic as their Republic. That being said, it is still a society that is colored by the various races and ethnic groups of its people. Each group shows influence in the fiber of Vastoyan life and few groups are openly discriminated against.

While multiple gods hold sway in Vastoya, The Fateweaver is particularly well received. The church holds political and social sway that openly oppose any forms of "chaotic" behaviors or religions that sponsor spontaneity. The church has been received by the Konsul in bills that have outlawed multiple deities from worship including the Prophet and the Wayfinder. Because of this though, the Shadowbroker is worshipped in the seedier circles in the shadows of the government.

It is an interesting dichotomy that a unified people such as the Vastoyans still differentiate themselves by Social Statuses. The most obvious distinctions are between those of the "higher" races and the half-breeds. Half-Orcs and Tieflings being particularly persecuted and of lowest social standing. However, beyond this racial exception full fledged races are treated similarly. What is more important, is the heft of your economic muscle. Simply put, the deterministic and stoic climates of the Vastoyan Republic have created a culture of workaholism. The more your output, the greater you are held.
This is displayed by the quality of your belongings. Interestingly, it is not just about the materials used themselves but about the overall quality. A shoddily made silver dining set may say less about a person's grandeur than a prime quality steel set. Artisans are held in higher regard than most and require some form of institutional education before they can sell wares under their stamp. Because of the cold climate, spices are another sign of status.
Land was a special area of status. People would vie for the most central residences of cities which were likely to be the warmest and most defended from all sides. This effectively made most Vastoyan cities circular or ovoid. Importantly, because the State owned much of the manufacturing capabilities, land placement was more valuable than amount of land owned. This has only recently started to shift as Merchants begin to utilize the newly decentralized government systems in their favor.

The Azurite Archives: Magic under the Republic

Arcane magic, like in many other nations, is regulated. In Vastoya this is done by the Azurite Archives. Wizards are the operators of the Archives with each cataloging knowledge across Piros. Any unsanctioned arcane magic is considered illegal. In Vastoya, the Hunters are the only group other than the Archives that employ Wizards for their talents. Sorcerers and Warlocks are often the target of persecution from both the Vastoyan Hunters and the Azurite Archives. This has led to a common idea that the witches of the Rimewood are sorcerers and warlocks who survive in lands even the Vastoyan military dare not enter.
Motto
"Through Solidarity, Vigilance. Through Disunity, Death." 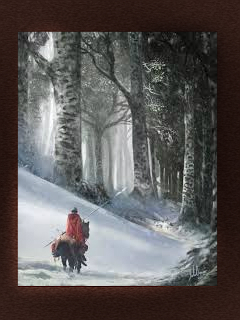 Remove these ads. Join the Worldbuilders Guild
The Vastoyan Republic