Whether a noble or beggar, artisan or labourer, every Elvaran has at least heard of the card game Revaelor’s Folly, even if they have never played it.   You can see it in action at the gambler’s table in any good Tavern, where individuals often play for money.

The game is for 2 players and involves a set of minor arcana cards.   There are 56 cards in a pack and 14 cards per suit.   The players are dealt 14 arcana cards each.


The suits of the deck are Nobles (swords), Merchants (Coins), Priests (Goblets) and Mages (Staves).   Each of the suits has a weakness that will defeat it in battle...

NB: the court cards are each assigned number, with the Page being eleven, Knave being twelve, Queen being thirteen and King being fourteen. 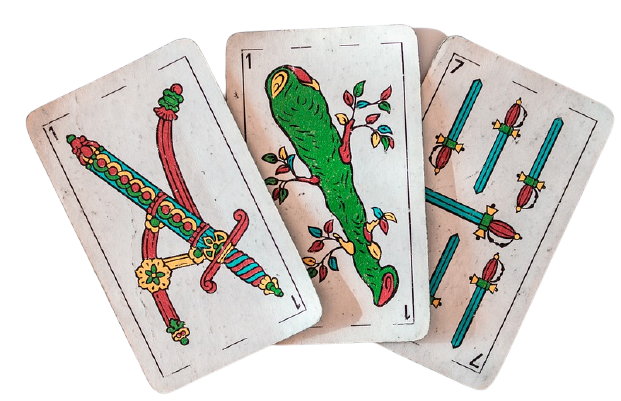 The aim of the first round is to ultimately ‘better’ your hand for the second and final round where the scores matter.   The dealer turns the top card over so that it is visible to both players.   Both players must make a bid on the card with a card from their hand. The non-dealing player will play a card from their hand first.   The first player can choose to play one of their ‘better’ cards with the intention of winning the uncovered card and incorporating it into their hand, or if that card is unappealing, they can play one of their less desirable cards, with the intention of losing it, fundamentally gambling it to gain a better one.   Player one does not have to match the suit of the overturned card, they can play whichever card from their hand they choose. Player two, however, has to follow the suit of the card player one has thrown down, unless they choose to trump the card with the suit’s weakness. E.g. if Player One plays the 6 of Mages, to win player two must either play the 7 of mages or higher, or they can choose to trump the mage with a noble. This trump must be of equal or higher numerical value to Player One’s card. So in this situation, for example, Player Two can choose to play the 6 of Nobles or higher.   NB: If Player Two cannot follow suit because they do not have any cards of that suit, they can play any card in their hand but unless it trumps Player One’s card, it automatically loses the play.   The two cards the players used to bid get thrown onto the discard pile. The player who won the bid wins the card on display and adds it to their hand.   The ‘loser’ will take the next, unseen card from the top of the deck, add it to their hand without showing it to the other player.   The winner of the previous bid will turn over another card from the deck, and the same routine will occur again.   The game continues in a similar fashion, with the winner taking the turned over card and the loser taking an unseen card from underneath until there are no remaining cards left in the deck.

The winner of the last card of the first round starts this round.   The players will battle their cards out to try and trump the other player, in order to win the most pairings. The winner is the first one to 7 pairings.   Each winning pairing then gets placed face down to the left of the player who won it, with the next card the player wins placed next to it and so on and so forth to form a row.   The winner is the player who has the most pairings in their row at the end of the round.   Should the round end in a draw, the players may pick up their respective winning pairings and choose 3 cards out of them to replay, again with the aim of trumping the other.

No one is really sure when or where the game was invented, though many tavern owners claim the game was invented in their establishment as a method of drawing in tourists from the Ember Isles.   The Guild of Scholars in Bridgeport, however, advocate that the game existed way before the establishment of the Duchy of Tarryn, and that it is merely a reworked version of an old Mathidoni card game known as Aerenka which was played with rune cards. 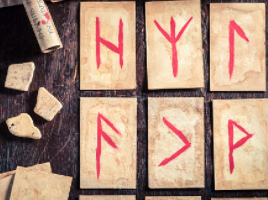 Astaeria© 2020 - 2021 by G.M Hartill. All rights reserved. All artwork is available by way of Creative Commons. No attribution required unless otherwise stated: https://creativecommons.org/licenses/by/3.0   On social media? Follow me on Twitter & Instagram!

I always find it amazing how people come up with actual games for their worlds. Probably because I am really not good at it myself. :D You did a great job with this game!

Aw thanks Rynn, that's made my day :)

Sounds like a more elaborate (and fun) version of War. I like the worldbuilding in how the suits work against each other. In the section describing suit match ups there is an error though, each follows the format of describing what the suit beats followed by what its weakness is, while for mage it only says that it loses to nobles and then elaborates on why. To find out that mages beat merchants you need to read the bit on the merchant.

Thanks for pointing that out, I totally missed that. Should be corrected now :)