"He's red like the one Tomkin had in the stories!"

The current emperor of Hayden and the head of House Lowthe. The 5th emperor belonging to the Lowthian Dynasty. Hail the smith-emperor, a true servant of his people.   Named after his most famous ancestor Osbert Lowthe, making him the 9th Osbert in the Lowthian dynasty and the 2nd ruler named Osbert in the empire of Hayden. His name translates to "bright hand" meant to be helpful, thus the sigil of his dynasty.

Maxie has always considered himself a proud Senecan, coming from a history of a people who had struggled through the trials and tribulations thrown at them by time and destiny, yet powered through it all despite the odds. A proud legacy that he will gladly pass on to the next. A proud legacy, stained by the defeat on the first continental war. A proud legacy he will avenge.

Perhaps one of the luckiest rulers in all of Ascary up to date, Maxie has surrounded himself with talented officers, generals, scholars, and councilors. Many of these individuals are fiercely loyal to the emperor himself potentially making him unstoppable in the eyes of fellow Senecans and potential rebels.

Patron of the Industries

A constant contributor and patron to the Dennish Industrial Sector specifically in the fields that he is most fond of. The field of Navigation, Engineering and Metallurgy has benefitted mostly from his contributions, through him and with the help of the Collegiums, the Dennish airships will never be rivaled by any other Senecan countries. These improvements made their airships significantly faster in the skies and much harder to take down.   Through his vision, the Dennish colonies of Carrion received a significant improvement through its rapid industrialization, railroads built made it easier for the Dennish colonist to move around the vast lands of the new world 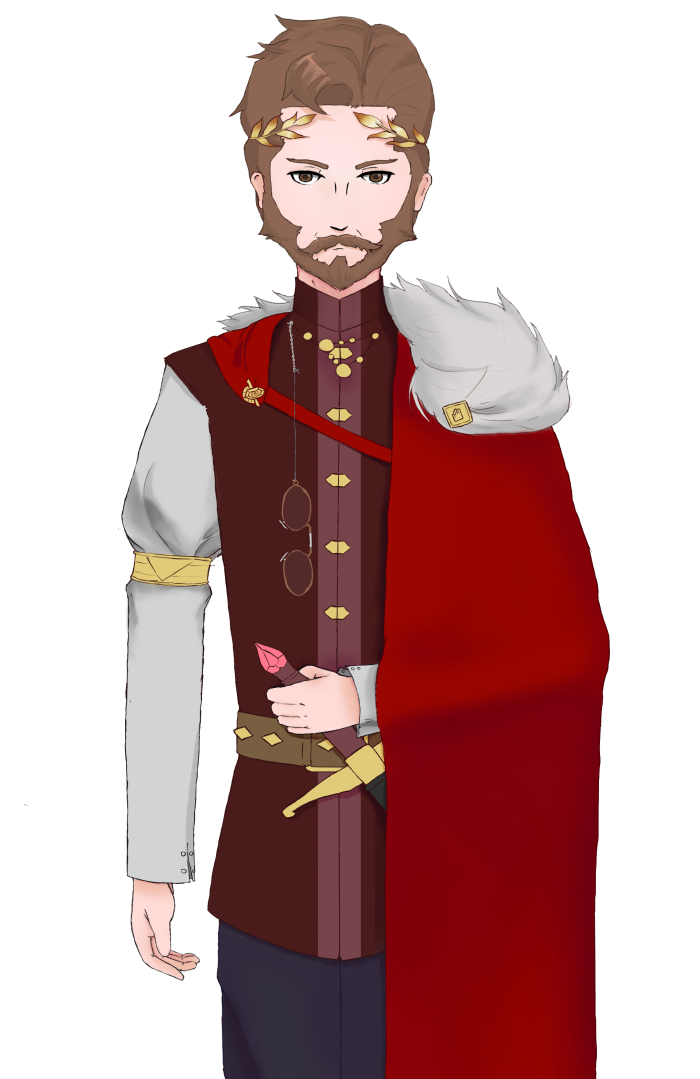 Emperor Maxwell Lowthe the 9th [transparent BG] by Rat King
Physically fit, Medium build, white-skinned human weighing about 74 kg and 172 cm tall. Has short light brown hair with a well-maintained beard (he likes to stroke his beard when pondering) and dresses well as the emperor of Hayden. Often uses the bronze/copper bifocal glasses for reading.   Has a seeming straight and regal posture as the way he carries himself in public.

Maxwell was born in the crimson cloak at 1176 No.Di, as the first child of Emperor Barret Sigor Lowthe II and Empress Sybil Brighton, as the heir of the Dennish empire, he would be destined for a prominent role in life. His education began as early as the young age of 6, under the tutelage of his tutor alongside his little brother, Lyndon Lowthe. He and his brother spent their time being tutored at their home in Westermark, rather than alongside their parents in the capital of Dragmoor. Their tutor made sure that both brothers would grow up to be close together. And thanks to him Maxie would learn to love his brother as his best friend and playmate, Lyndon would mostly be passive and docile due to his sickly disposition and his older brother would do best to protect him from being picked on.   Maxie would take an interest in smithing as his tutor was once a blacksmith himself, he would take up the craft as a hobby and his tutor would do best to hone his skills. Unfortunately, this newfound hobby was frowned upon by his parents as they visit him and his brother at Westermark. They consider the hobby to be below that of a gentleman let alone the successor prince and demanded him to drop the commoner's craft. Sadly he would adhere to the wishes of his parents, but secretly he still uses the forge since it's therapeutic for him. The next time that his parents would visit is on his 12th birthday, delivering him his very own wyvern he names "Marias" and taking him to Dragmoor to live with them. He would say his farewells to Lyndon hoping to see him in Dragmoor once he too reaches the age of 12.

As a teenager, he would be taught to rule as the next emperor of Hayden. Things went bad as Lyndon succumbed to his illness at the age of 11, this would send the now 14-year-old Maxie to be stricken by grief. He became depressed at the loss of his brother and friend, even outraged against his parents for not as caring enough to the death of their son. To cope with such grief he would retreat to the forge where he would work himself till he is tired and settled down, it was like a creative thinking room for him where he would be alone with his thoughts in the forge while the anvil to keeps his body busy. This period of grieving allowed him to create his signature weapon, a silver Warhammer he named "Memory".   Later that year he was betrothed to Lady Ingrid Von Klaine of Gilberg, Weschellia and was both married at the age of 16.

As a young adult, he spent time in the Dennish army leading a brigade of wyvern riders and fighting against Nazca rebels and most importantly the Gasconic army. He succeeded as emperor in 1202 No.Di when the Gasconic Emperor assassinated his father. He would return the favor by annexing a Gasconic colony and executing the rival emperor's relatives. Maxie managed to bring down his biggest adversaries in Seneca after a year of ruling the empire when he captured the Gasconic crown prince and ransoming his life for 10,000 Denars and coveted territories in Carrion in exchange for peace and the safe return of the crown prince. This offer was refused and the war went on for a year until the Gasconic emperor died from his illness.   Nowadays he is focused on pacifying the viceroyalties and colonies of Hayden

Born as a nobleman with proper education through a collegium in Hayden. Learned in both Senecan and Dennish history as well as military tactics and cartography. He learned how to administrate through his parents either by lesson or observation. In his free time, he is also an adept blacksmith.

Before he became the emperor of Hayden he served the Dennish military after he completed his education. Alongside Marias, his wyvern, he became a captain of a wyvern rider brigade fighting in multiple battles. He retired from the battlefield after his vision became myopic, fearing that he would not do well in battle even with glasses on.   He lent his wyvern to his champion, Barbara Dorlowthe after taking the position of an armchair general.

Usually calm and collected but will crack after intense pressure and be affected by his emotions. To cope with, he calms himself by being alone in the forge to be left with his own thoughts.   A masterful organizer seldom seeks help from his advisors in his own council.

"We are Senecans are we not? Surely we can act civilized and cease this father killing."

Morality
He considers himself a servant to his people, putting the need of Hayden above all. He is also reluctant in fighting fellow Senecans in fear of giving the Lecarnic an upper hand while they are toiling against each other. He aims to seek peace with Gasconia but fears looking weak.
Philosophy
Every problem has a solution and every solution needs the right tools to answer.   Compassion should only be spared to those who you care for and those who need it, and Respect to those who deserve it

This man avoids any form of alcoholic beverages, believing that it dulls one's senses especially during forging.

Aside from expanding his colonies in the continent of Carrion. He would like to pursue the Senecan Agenda alongside his peers and potential allies, which is to collectively wage war upon Lecarne for all their transgressions against the Senecans and their ancestors before them. Only he and the Wesschelian emperor seem to be sharing the old agenda, and having the two biggest empires in Seneca appears to be influential towards the other realms.

Maxie is a man who has a knack for recognizing talent and placing these talents accordingly.

Maxie is a man who upholds justice under the laws of Hayden and. He would treat all Dennishmen fairly regardless of race (unless you're a Dennish elf, which is unlikely to ever happen). He also has immense compassion for Nazca who have embraced his culture.

Unlike his father who was a heavy smoker of Oxadan cigars, Maxwell has no vices to speak of.   If the going ever gets tough, Maxwell might have a tendency to get emotional and stray away from his usual cool and calm demeanor. Often times this would cloud his judgment and decision making. Known to harbor intense hatred for elves and anyone who stands with Lecarne.

Adheres to the Senecan Pantheon especially to the Arbiter. 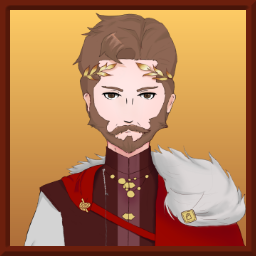 "Such ignorance, how could I have led my people to their demise."
— 1206 No.Di. After the Lecarnic campaigns

"Assimilate you misguided Nazca, assimilate for greater works can be done if you do. Rebel and you stand in the way of true progress!"
— 1205 No.Di. After Nazca rebellions