The City of Falden

In the north of Dosharia, between the Silvermoor Mountains and the coast of Thornrock Bay, sits the city of Falden. The city is situated on the lower foothills of the mountains, surrounded by green hills and fields and the dark forest of Kerhin. Down from the mountains flows the White River, which gently winds its way around the hills before reaching the coast. Along this river flows the life-force of Falden, its waters bearing the weight of the barges from the southern mining town of Stonefall to Falden, and the small merchant ships from Falden to Thornrock Bay. The farming communities of Amberville and Honeyrest provide the city with an array of crops and tend to the herds of ponarak that wander the grasslands.
Falden began and still thrives off its trade with other cities and nations, but most notable is the trade of pure gemlights. To the northern reaches of Arhia these gemlights are a valuable and precious commodity since they have yet to be discovered anywhere other than within the Silvermoor Mountains. Falden can boast the largest pure gemlight beacons which illuminate the city’s major streets, and during the gloomy winter months the whole city is adorned with shimmering strings of tiny colourful gems and crystals.
Tall walls once surrounded the city, but since the Last War, they now stand at half their original height. Guards patrol along them, keeping a careful eye on all who pass through Falden's gates, but the gates themselves constantly remain open to the world.
Falden
Open full size
Today Falden is recognised as a city of education, its University drawing students from all across Arhia, but it was not always known for being the centre of wisdom and knowledge.

Falden was once the home and seat of power for Lord Eren Reymas, who had fancied himself a contender for the title of Silver King. This position was highly sought after as it gave the bearer rule over the Silvermoor Mountains and all the materials and treasures stored within. As a thriving town that controlled much of the trade between the mountains and the coast, Falden was the perfect place for such a King to establish his rule. Unfortunately for Lord Reymas, few others took his claim seriously, at least, not at first. Reymas gathered his strength quietly, leaning heavily on the support from his friends and allies in neighbouring Leora. Trade deals were struck in secret, and for a while all but Reymas' mining companies struggled against roving bandits and missing supply carts. To avoid suspicion, Reymas was not left totally free of the troubles, but his losses were minor compared to others. It is thanks to him that Falden flourished so quickly. But sometimes, the brightest sparks are the quickest to snuff. 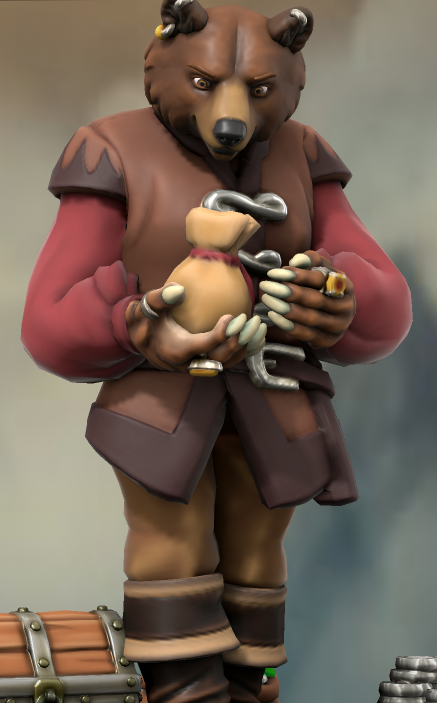 Lord Reymas by AP. via HeroForge
While Lord Reymas sat and patted himself on the back for his own clever scheming, other schemes took root. For a while, the other Lords and Ladies had kept their heads down, too preoccupied by their own concerns to worry about "little" Lord Reymas until they looked up and outwards. The raiders were traced back to Leora, who, to avoid war, were quick to point the finger at Reymas. This betrayal cost Reymas his life and his wealth. Leora had avoided war, but soon the armies of Sandbury and Highcross were marching upon Reymas and his shining city. Falden became an island surrounded by a sea of soldiers. The siege of Falden is perhaps the shortest any in Dosharia have ever known. The city had little in terms of defences other than its towering thick walls, its main fighting force having been sent by Lord Reymas to Stonefall to protect the raw materials which was Falden's wealth. With the strength of the joined forces surrounding Falden, the soldiers had no hope of pushing through and securing the city. The invading armies had cut off Falden's lifelines to a brutal affect, now all they had to was wait. However, it was not long before the gates were opened to them and its vast stores of wealth plundered - Lord Reymas had been discovered, seated on a newly crafted silver throne, with a dagger in his chest.
No-one knows who it was who killed him. Some suggest it was the work of a member of the Shadowscales, others wonder if it had been an inside job. None had cared enough to explore the case further, and so the mystery remains unsolved. While Lord Reymas had helped Falden grow and flourish, the people he had tried to rule had not loved him. His love of wealth far outweighed that which he had for the people. Many say that his heart was as solid and cold as the throne upon which he died. While the people of Falden grudgingly recognised that he had provided them with comfort and luxury, it did not take them long to give it all up in exchange for their lives. The armies shared the plunder between them, but the silver throne was left untouched and the pursuit of the title of Silver King was eventually abandoned by all.
What Happened to the Silver Throne?
Opinions vary as to what happened to Lord Reymas' silver throne. Some wonder if it was smelted down and used to help rebuild Falden after the siege. Others believe it to be hidden somewhere within the University with some wondering whether the Grandmaster of the University has claimed it as their own seat of power. Those who have visited the University and had an audience before the Grandmaster can easily dispel some of these wonderings, but few have ever had reason to visit the Grandmaster's private rooms. So this theory, while inaccurate, is still held by a few. In fact, the throne is stored within the University vaults - a place whose existence is known to only a very few high-ranking masters of the University.
If a determined and curious soul were to find their way to the vaults, they would find an array of wonderful and intriguing items and artifacts stored within. Some of these are held as reminders of the past, kept as lessons to help guide future generations if and when they are needed. Others hold a great store of power, a power few are either willing or able to wield anymore. These artifacts in particular have been kept as a safeguarding measure in case, gods forbid, wars were to return to the world. There are also a surprising number of useless items which had been discovered and assumed to be of importance.
The silver throne has found a use, but it is perhaps one that Lord Reymas would not have been all too happy with. For this magnificent throne covered with elegant and intricate carvings now sits covered with musty blankets and cushions before a plain desk covered with books, scrolls and ledgers. It is the seat of the Vault Keeper. The Keeper's duty is to keep a thorough record of all the objects within the vault, ensuring their safety as well as keeping a keen eye on any who wander down there. Of course, with the vault being such a secret, visitors are incredibly rare and there seems little reason to keep such a careful watch on such old and forgotten items. It is generally expected that the Keeper would complete a trip down to the vault chambers at least once a month. Some more cautious Keepers have been known to visit on a more regular basis. After all, there are items of unknown power and origin down there. Who knows what they could be capable of if left unattended for longer periods of time?

During the aftermath of the siege, chaos ruled the streets of Falden. Nobles bickered amongst themselves for the rule of the city, and the common folk rallied and rose in protest. Farmers had to resow their fields, and the miners were pushed to work harder in their efforts to restore the city's wealth. The soldiers at Stonefall were called back to the city, and eventually a semblance of order was established when General Folas placed himself in temporary command of the city. Tension still simmered amongst the nobles, but eventually it was one of the lesser nobles who took the role of ruler.
Lord Reymas had built his castle at the very heart of the city, but after the siege it had been left empty, the grand halls stripped of the luxurious tapestries and whatever treasures had decorated the walls. Yet one day, Lady Thana Virro ventured into the abandoned castle and discovered one treasure that had been left. It was a simple treasure, but one which changed the fate of the city and its people - a library. Lord Reymas had gathered many books and scrolls but had barely read any of them, trusting that the collection itself would prove his wealth, if not his knowledge. Lady Virro was thrilled at her discovery and envisioned a new use for the empty castle halls. As an avid advocate for education, it was no surprise when the castle became known as the Scholar's Keep under her care.

General Folas recognised Lady Virro's passion and potential for spreading hope amongst the people, a hope that had the power to transform the city. Under his recommendation, Lady Virro soon found herself called upon by the people to be their ruler. Despite her status of a lesser noble, she was well-liked by all - both of noble and common status, and all could see the wisdom in selecting her as their ruler. Lady Virro herself could understand it, even if she did not desire it, and so humbly accepted the role. The people called for her to be their Queen, supposedly as a last insult to Lord Reymas, who never actually became a King. Yet Virro shunned the title of Queen and conceded to be raised to a status of High Lady instead.
As the High Lady of Falden, her first action was to create a council to govern the city and its trade, allowing her to focus her full attention on establishing the Scholar's Keep. These carefully selected lords and ladies established the framework of government, which has remained relatively unchanged to this day. Lady Virro held on to the title of High Lady uncontested for the rest of her life, passing it on to her eldest daughter, Cressila Virro, who continued to develop the Scholar's Keep, opening its halls and libraries to the public and promising to educate any who wanted it, regardless of rank or wealth. With the newly founded Council to take care of the running of the city, the position of High Lady became merely a symbolic one, yet one that lasted an entire century before being dissolved.
The Scholar's Keep still stands proudly at the center of the city, but is today simply known as the University of Falden. Lord Reymas had dreamt of a City of Silver, but Lady Virro transformed Falden into a City of Scholars instead. 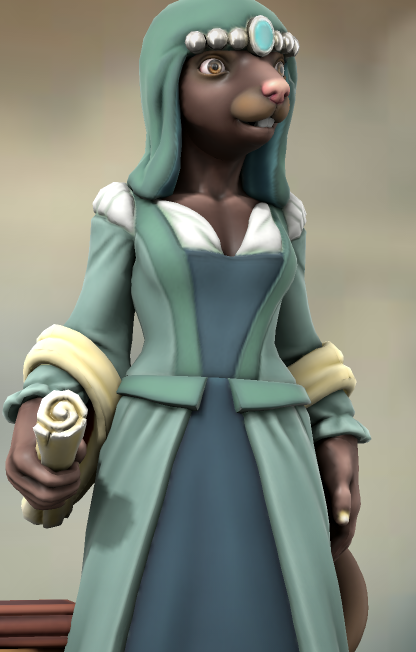 Lady Virro by AP. via HeroForge
Dosharia
Join Arinthel Discord!
All artwork, unless stated otherwise, is the property of APullenArt © 2019 - 21.
Cover image: by AP. (via Artbreeder and Photoshop)

Nice article, I liked the development of the history and the very effective continuity.

Thank you! This took a while to write, but I am quite happy with how it came out in the end. :)

I love the depth of the history of this place. The HeroForge portraits really add to the article as well. <3

Thank you, Emy! The only thing that bugs me about the HF portraits is how big they are, but I have yet to figure out how to fix that. <3