"Quick, quiet, and efficient. I am a noble assassin, and I do my job well."
— Zephyr Windgale

Zephyr is missing her right eye, which is covered with an eyepatch of Oceos'lo'kaiian make, said to have been lost during the Night of Black Tears.

Zephyr is a skilled mage-warrior and has a small arsenal of ice based attacks used in tandem with her quick and successive dagger strikes.

Zephyr wears two layers, the first of a simple two-piece Lithosian wool-cotton blend pair of pants and shirt. Over top of this is leather armor distinct of agents of the Order of Old Lithos. This includes a flexible torso piece, a tight-fitting girdle, leather gauntlets, and tall leather boots. It is specially fitted for maximum mobility and agile speed in the midst of combat.

Zephyr Windgale, born as Nel Adventtus, rose to prominence within the secret sects of the Order of Old Lithos from an early age. She entered into the Order as one of its "Ears," an informant who kept tabs on Aristolian merchants and conveyed information to and from for her higher ups. Growing up on the streets of Garras, her nimble and dextrous agility earned her the nickname "The Zephyr Wind." These skills eventually caught the notice of the Order's headmaster, who extended an invitation to her to become one of the Order's "Eyes", an elite assassin trained by the Order itself for the purpose of assassinating high profile Aristolian and Lithosian nobles.

One fateful day, Zephyr had succesfully been admitted membership into the mysterious Order of Old Lithos by contacting one of their Ears and completing the trials and riddles associated with entry into the organization. It was here that she was taught a variety of magic, hand to hand combat, and other traditional Lithosian beliefs. Contrast to the Colleges of Magic which are ordained by the nation of Lithos and Erudism faith, the magic taught within the Order pertain to several forbidden tomes relating to dark magic and God Queen Morrigan which are highly outlawed as of the Era of Twilight.

Zephyr acts as an agent of the Order of Old Lithos and performs a variety of assignments, tasks, and missions at the direction of the Order's Headmaster through her supervising Hand.   Zephyr's fate seems to have changed as a chance encounter with one Pyre Redheart has changed the course of her life forever.

Zephyr's earliest memories are of the "Night of Black Tears," an evening recorded in Lithosian history as a bloody conflict between House Adventtus and House Debtter, where the latter working on behalf of influential members of the Merchant's Guild murdered members of the Adventtus family.   At the age of six, her home was attacked and her parents murdered in front of her and her younger sister. The young girl fled her home with her sister in tow, losing her right eye in a scuffle with an Aristolian mercenary in her escape. She struggled on the streets of Garras for several years before being taken in by the Order of Old Lithos.

Zephyr is a quick thinking, competent, and decisive young woman who prides herself on her ability to make tough choices under pressure. Her lightning relfexes and incredible perceptiveness and awareness of her surroundings makes her a dangerous foe to the slower and more brutish foes that she comes up against. Her intensity comes off as a detached personality, coldly denying people into her mind; she is very mentally guarded and rarely divulges in discussions about emotions and feelings, though she has much more on her mind than one may be led to believe.

Zephyr lives by a personal code of good, believing her work as an assassin and furthering the goals of the Order of Old Lithos is in the best interest of everyone in Lithos. She has a severe distaste for Aristolians, particularly aristocrats and wealthy merchants and has no qualms with bringing them injury if they stand in the way of her goals.   At her core, Zephyr is a warrior who believes in honor, fairness, and justice. She personally upholds these ideas, even if those around her don't always agree with her methods. She may not express it much but she deeply cares about the people around her, and will do her best to protect those she loves. Namely her younger sister, Anita Windgale.

Zephyr is driven by the ambitions taught to her by the Order of Old Lithos. She wishes to see the ancient monarchy restored, restrictions on magics released, and the exodus of Aristolian influences from the lands of Lithos. She wants to have what she had lost such a long time ago, and the Order seems to be the best path forward.

Zephyr is very intelligent and dexterous, quickly picking locks, quietly infiltrating enemy encampments, and making efficient work of her targets before slipping away into the night. She is fluent in several languages knowing how to read, write, and speak them all with ease.   Despite all her knowledge, she is an especially reserved girl who spends a lot of her time in her head, and is not very skilled in the ways of socializing and high society.

Zephyr enjoys reading Lithosian poetry and literature, and has a secret fondness for merman characters from her favorite novels, though she'd never tell anyone. She is especially fond of her custom made Oceos'lo'kaiian eyepatch.

Zephyr has a strong sense of personal justice and sees her objectives through with a dogged determination. She values the bringing of a task to completion and is very thorough with her preparations and plans. She thinks ahead clearly and can act under pressure.

If Zephyr has any weakness, it is her quiet desperation. She keeps a lot of emotional issues and concerns to herself in order to remain focused with the mission at hand and has trouble sharing her issues with other people. She is a very isolated person lost in her own negative thoughts.

Zephyr has a small handful of subordinates that work directly under her as her "Ears." Typically these are trusted informants who hold a close connection with the Eyes they work for. However Zephyr's detached personality keeps them at an arm's length, giving her an air of enigma to her colleagues.

Zephyr is incredibly defensive of her kid sister, Anita Windgale, with whom she escaped the Night of Black Tears with. The young Anita however is becoming an ever more difficult for her sister to protect, as her manic outbursts become worse and worse. Zephyr cannot find a way to protect her sister from herself. 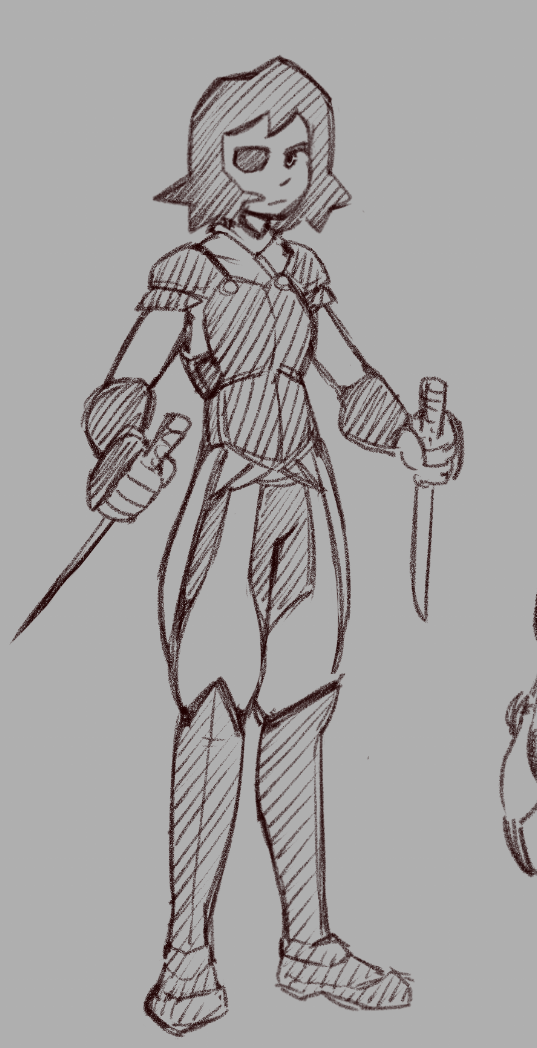