The Shy Folk of the Woods

There are many who pride themselves in their knowledge of the Echo Woods, confident they know it all of its secrets. But for each blade of grass in the forest there is a mystery, as for each falling leaf and blooming flower. The Timiditen are one such mystery, folks of the forest who are so shy of nature they have, for the most part, escaped .

Somewhere between plants and conscious existence, lie many weird life forms, stuck between full sentience and complete absence of mind. The Timiditen are such creatures, plants created by the random doings of magic. They are mostly mindless, with little culture to speak of, and they spend their days wondering solitarily through the bushes and trees.

To the unknowing eye, the Timiditen might seem to be nothing more than aimlessly wondering beings. But do not let yourself be deceived by their slow pace and unwavering direction. Timiditen operate on a logic of their own, moving through the forests with the sole purpose of helping it grow.

Not only do they help with pollination, as bees and many other living creatures do, but they also help with the creation of new species. Their intimate connection to magic makes it so that plant life they encounter is sometimes changed by it, transforming into something new. This can range from magical plants, to fully sentient beings.

Timiditen, or Mimosa Timidis, are made of wood and leaves. To the mundane observer, a still Timiditi will look like a mass of enter-twinning stems, light green leaves and pale purple flowers, rising up into a somewhat humanoid form. They are devoid of any "features": no eyes, ears, mouth whatsoever, just the vague shape of a figure standing on two legs.

Timiditen can reach a height of 5 feet. They move at a slow pace, sliding their roots in the earth below them one inch at a time. It takes them about a week to move 5 feet, their movement almost imperceptible to the human eye.

Most unusual about the Timiditen, and also the phenomena that gives the species their name, is their reaction when surprised or threatened. As soon as they are touched, be it by animals or other non-plant life forms, their leaves fold onto themselves one by one in a fast sequence. This process causes a mysterious reaction that makes the Timiditen invisible, suddenly vanishing from where it once stood. It only dares re-appear when if finally feels safe once more.

Timiditen travel the woods alone, moving solitarily on their path. But when a Timiditi encounters another, they will start a strange, hypnotic dance together. They come closer to one another, moving more quickly as they start to mirror and imitate each other's strange movements. There is no rhythm, no repetition, just fluid movement as energy circulates between them.

Their bodies morph as flowers start to cover their entire form, and the nature around them blooms with their dance, as if the movements give it life. The energy pulses through the woods, until eventually the dance comes to an end and all goes still once more. The Timiditen will make their separate ways, returning to their endless walk through the forests.

The dance is a magical sight, and one of the only moments where Timiditen can be seen without attempting to hide. However, watching them for too long is dangerous, as the hypnotic dance will draw onlookers to them while the magic slowly over takes them, flesh turning to wood and blood turning to sap until they, too, join the dance.

Pollination through the Dance

The Dance of Blooming, as its name indicates, serves as a catalyst for the blooming of the Echo Woods. The movements of Timiditi through the woods help the spread and propagation of pollens throughout the forest, and the Dance multiplies this effect. It also helps the creation of the new species as the surrounding plants find themselves changed by the magic emanating from the Dance. 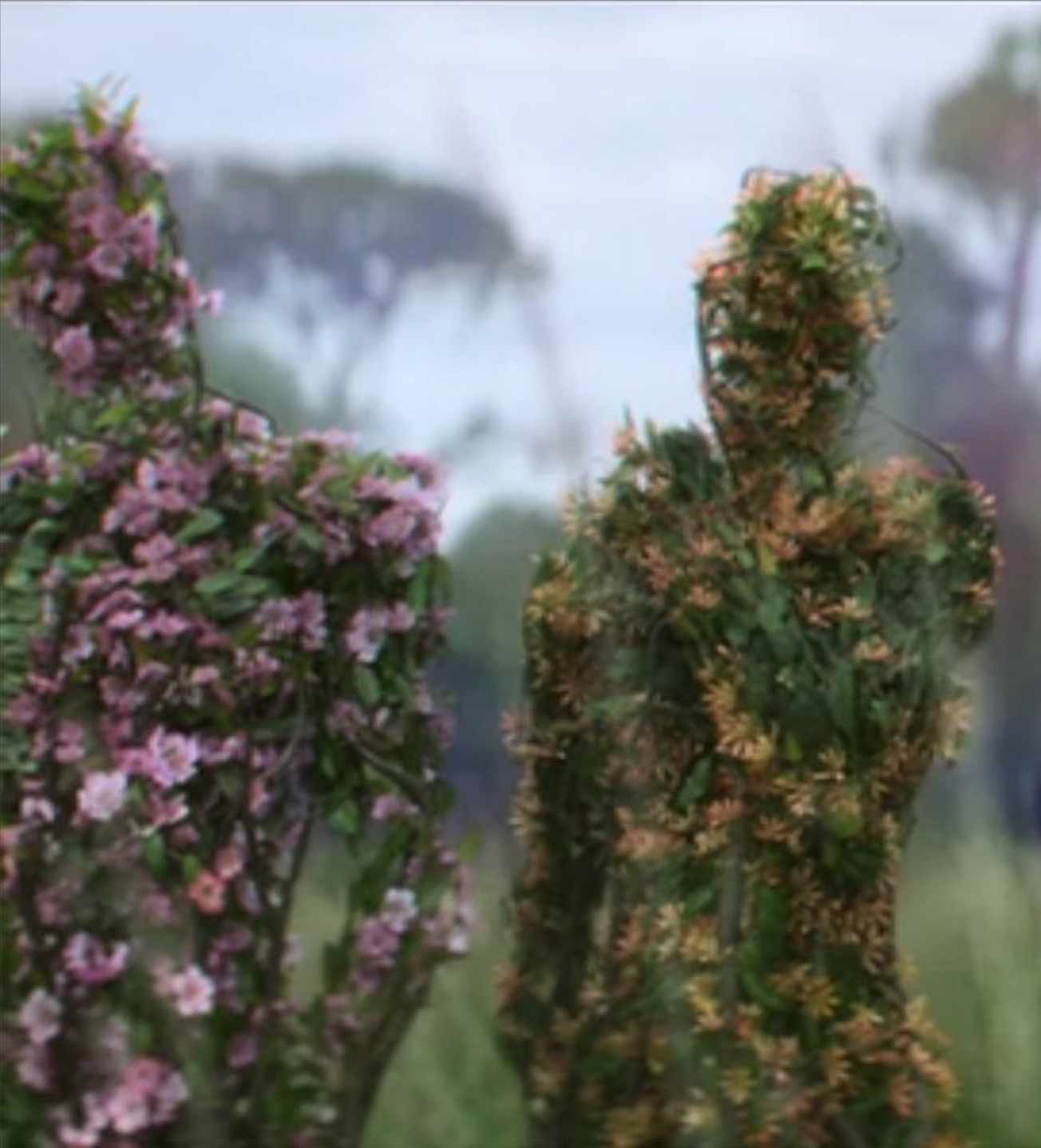 Timiditen are almost unknown of by the inhabitants of the woods. Their cautious nature and ability to turn invisible makes them very hard to observe, and they are known almost only as an old wives tale.

Whats more, most researchers who managed to track a Timiditi inevitably get caught in their dance, disappearing without a trace. There are many stories of feys disappearing into the woods, never to be seen again.

There are many tales of the "Shy Folk" that parents tell their kids to get them to behave. Most of them have the Timiditen take away children who scream and shout too much, as they disturb the peace of the wood.

In the Echo Wood, things are rarely what they seem. Every new step could be your last.

Hey everyone! This is my contribution to the Flower Bloom flash challenge, hope you guys found it interesting!

Firstly, congratulations on the daily feature! I was so excited for you when I saw it! :)   Second, I love how magical the timiditen are. I can really see them vividly in my mind when you're describing them, and their dance sounds captivating (though I wouldn't want to see it)! Really unique take on the flash challenge. I love your world so much <3

Thank you!! I was so excited as well, first time getting a feature and it feels pretty awesome :)!   And thank you for the compliment, you're too kind and they really make my day. I'm getting close to printing them out for a motivation board :')