The Shepherd, the Poet and the Horizon-Walker

Some say Kirïal is the most powerful of gods, for he decides the fate of our souls once the time of death has come, but only we poets know his true strength.
— Layla Orestof


Of all the gods, Kirïal is the most discreet. He is the stillness between two heart beats, the thin line of the horizon, where the sky meets the land. He can be found in the time it takes for a fallen leaf to gently sway towards the ground, in the smell of frost as fresh snow covers the mountain tops. A moment of peace as the morning light first caresses your face.

As a god, Kirïal is closely associated to Aher, the Throneless King. The two are most often depicted as lovers, and temples to one of them often include shrines of the others, as separating the two deities is considered to be bad luck.

It is he who guides the souls of those who have been good in life to Ayshabiu, the Isles of Eternal Rest, and it is he who will ensure that the cruel and vile will suffer endlessly in the pitch black guts of Almayot, the Great Beast.

The Shepherd's most devout followers have tasked themselves with returning the dead to where they belong, in hopes that their humble work on earth will help the god in his duties. As such, their temple is composed mostly of holy warriors, who travel the lands to strike out evil.

Kirïal the Poet is a kind and gentle being, the God of all the small beauties that make life the miracle that it is. He is the muse of poets and artists alike, who blesses them with divine inspiration. Some claim the god's own poems are spread through the world, and are of such beauty and elegance they are said to bless those lucky enough to find them.

In his spare time, Kirïal the Poet is said to walk the roads of Danatelia, stopping to smell the flowers and taking in the breeze as it blows through his hair. Legends abound of travellers meeting the god on their journeys, each who stopped to chat with him claiming he had gifted them a small red wild-flower.

Alignment
True Neutral
Domain
Knowledge, Twilight
Symbol
A horizontal line with a dot at its centre

Guardian of time and keeper of fates, the Horizon-Walker is old in spirit, and just as quiet as Kirïal's other aspects. From his domain at the edge of the world, where the sky meets the sea, he keeps a watchful eye, an impartial dealer of luck to those who live far away.

When in need of luck, it is popular to pray to the Horizon-Walker in hopes that he will bend your fate. Few such miracles have seemed to be recorded, yet this does nothing to diminish the abundance of worshippers Kirïal's temples welcome every day.

At the moment of death, each and every soul is said to find themselves brought to the Horizon-Walker, so that he may record their life. He listens to each and every story with patience and attention, writing down every last detail.

He then binds the pages into a book with care, and when he is finished he brings it to the Mizamanium, his Library of Souls. The shelves stretch out across beautiful and ornate corridors, and the lives of each and all who have died are safely guarded in the vast maze.
Children 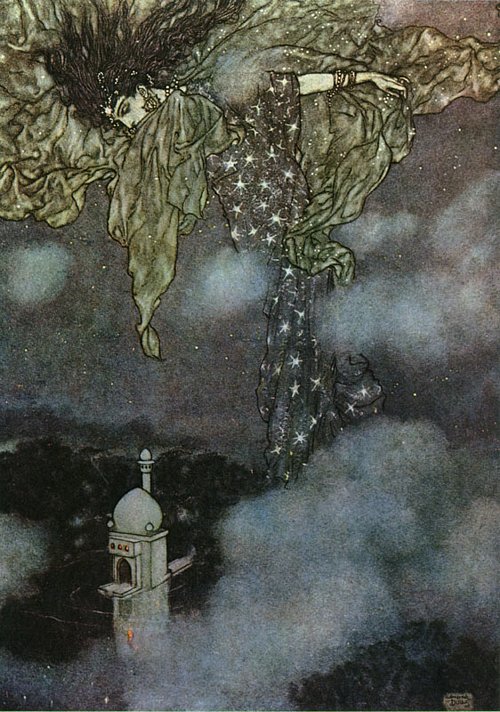 Kirïal the Silent by Edmund Dulac

Another article done! Finally reaching the end of this pantheon, soon I'll be able to make the general article and start writing some myths!

Kirïal is my favourite. I love all three aspects of him, and he's the one I think I would end up worshipping in Interarcanum. <3 I love the poetic introduction at the beginning, by the way. So beautiful to read.

Thank you! Little secret, he's my favourite too. We'd probably end up worshipping him together ^^. And I'm very happy to hear you liked the intro :D <3

The Mizamanium sounds cool. It seems that the life of every soul creates a story that is worth preserving.

Thank you :)! And yes, its of some comfort for many to know their lives will be remembered somewhere, until the end of times.