The Wind Rider, the Ever-Changing, and He Who Sleeps Within.

LADY: Green is the color of earth, of living things, of life.

GAWAIN: And of rot.

LADY: Yes. We deck our halls with it and dye our linens. But should it come creeping up the cobbles, we scrub it out, fast as we can. When it blooms beneath our skin, we bleed it out. And when we, together all, find that our reach has exceeded our grasp, we cut it down, we stamp it out, we spread ourselves atop it and smother it beneath our bellies, but it comes back.

It does not dally, nor does it wait to plot or conspire. Pull it out by the roots one day and then next, there it is, creeping in around the edges. Whilst we’re off looking for red, in comes green. Red is the color of lust, but green is what lust leaves behind, in heart, in womb.

Green is what is left when ardor fades, when passion dies, when we die, too. When you go, your footprints will fill with grass. Moss shall cover your tombstone, and as the sun rises, green shall spread over all, in all its shades and hues. This verdigris will overtake your swords and your coins and your battlements and, try as you might, all you hold dear will succumb to it.

Your skin, your bones.

Your virtue.
— Monologue from The Green Knight

Lord of Skies and Wind, Aher is the Saohri god of nature and death. He is what lives and dies, but also what remains, the eternal change that moves the world- he is time itself.

As with all other major divinities of the Saohri Pantheon, Aher the Green is known to have three major Adegho: The Wind Rider, the Ever-Changing, and He Who Sleeps Within. It is most common for people to worship either Aher the Winder Rider, or Aher of The Decay, though the temple of Altebieat actively worships all aspects of the god.

The cult of Aher is an esoteric and mysterious one. Priests must go through several initiation rites in order to be admitted into the Temple of Aher the Green. Devout worshippers of the god speak a language of symbols and rhymes, and remain far away from the metal cages of civilisation.

Aher is the only of the Saohri gods to predate the existence of Matazel. He is eternal, never born, never dead.

The god cares little for the affairs of mortals. He simply is, unstoppable and uncaring. Time will pass, and so death will come to all. Aher transcends all that is and ever was. Theologists have struggled to pin down the nature of the god in rational ways, pushing his early worshippers to abandon the tools of reason and pursue a more mystical understanding of the god.

Across history, a bond of some sort was created between Aher and Kirïal the Silent, god of the afterlife. Popular depictions tend to portray them as either two sides of a same coin, a way of expressing the link between the world of the living and that of the dead.

Apperance: In ancient depictions, it was common to see Aher as a skeleton riding a white horse known as wind. Modern depictions tend to show him in a decomposing form, covered in leaves and other garnments made of plants and fur.

Domains: Priests of Aher are closer to druid circles than proper D&D clerics.

Divine Symbol: A white spiral, often found on tree trunks and the like, or a green ring.

Temples: Temples of Aher are rare, and exclusive to the initiate of the Temple of Aher .

Scriptures: One of the most well known texts of the Temple of Aher is the Book of Spirals.
Children

Priests of Aher are few in number, and they are rarely seen in large cities. They prefer to remain away from the fruits of civilisation, favouring instead the natural world where they feel closer to their god. They are secretive, and live communal lives among themselves. 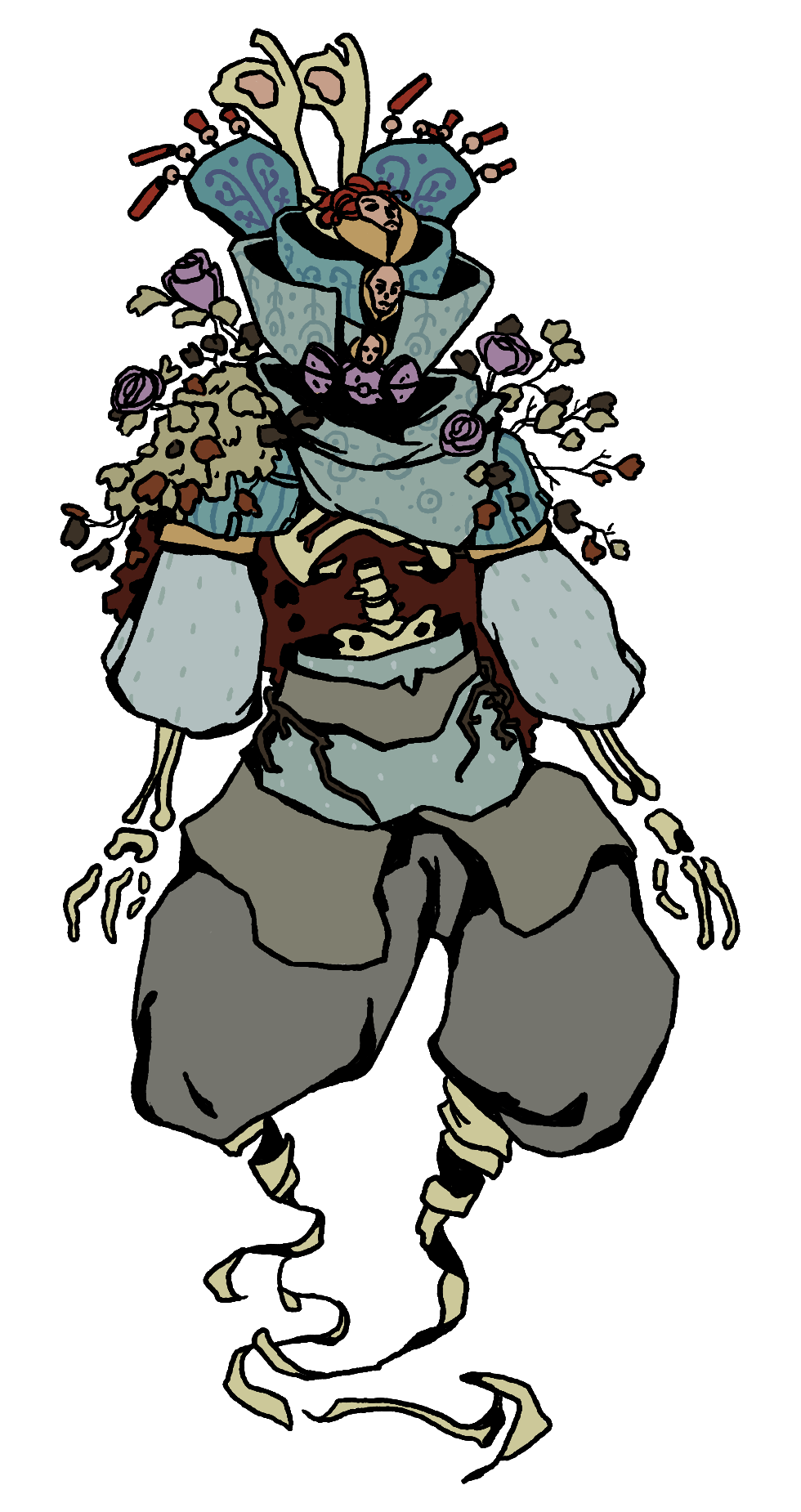 They speak the language of the world, where symbols and poetry abound. It is they only way they have found to express the fundamental and transcendant nature of their god- rational thoughts cannot do him justice. Prayers are feverish, passionate, as the priests cry and hit their chests in a furious dance. They are told in forests and caves, around fires, shadows stretched against the red of the flames.

Priests of Aher are known to produce some of the best poets Danatelian society has known, Benjam Taihmul among them. They are often hard to penetrate, and many rumours speak of dangerous Aherian poems who would drive mad those foolish enough to speak them.

There are no precise or well known guidelines explaining how one becomes a priest of Aher. It is a calling, and those destined to become priests will always find themselves where they ought to be. That is not to say priests of Aher believe in fate, or destiny: in fact, they actively reject these notions as they go against the freedom so dear to their god.

However one finds themselves among priests of Aher, they must go through rites of initiation. These are one of the many secrets of the cult of Aher, and nothing is known of them by the uninitiated. Rumours abound on the nature of these trials- some claim they are asked to eat the beating heart of a sheep, or even engage in acts of canibalism, while others claim priests of Aher go on spiritual journeys into the world of gods.

Temples of Aher the Green

You shall walk into the maze of green, and loose yourself in the sprial of white. Walk, until your feet bleed, until the red of life seeps in the green of moss. Then you will see: all that lives will die.
— Extract from the Book of Spirals


Temples of Aher are constructed following weird and confusing patterns, often incorporating many natural aspects into them. The very first temple of Aher was built among the decayed skeleton of a forgotten giant, found by a priest who had followed messages from their god. Entering a temple of Aher is a spiritual journey in and of itself- as one moves through the complex structure, one must die and be reborn.

Altebieat is one of the most well known temples of Aher, and the only one that is accessible to the non initiated. It is at the heart of Roussi, and was built purely for diplomatical reasons pertaining to the inner politics of the Saohri Temple. It is a large garden built in the shape of a spiral, which priests of Aher mostly use a communal house for the citizens of Roussi. It is one of the main point of contacts that priests of Aher have with non initiates.

I watched a video essay on The Green Knight and was reminded of just how much I love that movie and its themes, and it made me want to rewrite some of this article. I ended up rewriting all of it.

Anyway, I think The Green Knight movie, as well as Sir Gawain and the Green Knight share a lot of thematic similarities with Aher. They represent the same concepts- the passage of time will spare none, all that lives will die. Priests of Aher are those who do not fear this reality of life, but who embrace it. They see the world as a wide tapestry, and each and every one of them moves among it. It does not matter what one does, the end remains the same.

Ooooh! Looks neat :D   Does he grant any boons? In that case, which ones? How do you get them? Does he levy any cool curses? :O   AWesome work, Changeling! Keep it up for WE :D And have fun

Thank you! And yes, he probably does.. although I have no idea what these are, pushing it away because writing them down implies stating them for DnD ;-;   Might make a few conditions stubs actually for curses and boons, that could be pretty neat.   Thank you for the kind words and good vibes Q :D!

I like it. Nice concept of a god with three forms (very familiar don't you think :)) Good luck in WorldEmber!

Thank you! And yes haha, all 7 gods of the pantheon have three forms- I'm meant to make an article explain the why and how behind. Good luck to you too!

The articles about gods are some of my favourite from you. I find them so fascinating! I love the contrast between the wild and free nature of one aspect of Aher, and the decay.   You've got this, Changeling! <3

Aaah I'm so glad to hear that, they are some of my favourites to write so I'm glad part of that shines through :), and glad you like the contrast <3

A neat God with different aspects that all make sense as a unified divine whole!

Love your articles as always. Really enjoy your method of giving each of your deities three aspects.

Thank you for the kind words Chris <3 I'm glad you enjoy that aspect of the theology! Its definitely something I love about them :)

It is a very nice concept a chaotic divinity at the base of the creation and that keeps in the highest consideration the freedom of the creatures that have been created. I will point out three typos that I have noticed so that you can correct them when you want to: 1)replacing the unstructed chaos=replacing the unstructured chaos; 2)the innescapable cycle of time itself=the inescapable cycle of time itself; and 3)local law enfrocement=local law enforcement.

Woop, thank you very much for the typo catches <3 ! And I'm glad to hear you enjoyed the concept of the god, I do enjoy thinking about the particular relationships it has with the Danatelians.

Mmm interesting... I look forawrd to see It in an article!!!

THE ART <3   Still love your god articles. I think this is very well put together and I understand the concepts just fine. I love the quote from the frightened mother.

Right!! The art is just *chefs kiss*. Thank you for the feedback, I appreciate it!