Time is a difficult thing to standardize because the length of any significant time period (rotation cycles, orbits, etc) is different on every planet; not to mention that time is relative to the observer's frame of reference. However, the generally accepted standard time system for interstellar timescale synchronization is Arc-time, often simply referred to as "standard time." One arcon is defined as one full period of the Pendulum, or 9,192,631,770 periods of the radiation corresponding to the transition between the two hyperfine levels of the ground state of the quinpentaprotium-133 atom.

*1 cycle is defined as the length of time taken by the Cycler structure in the Pendulum system to complete one full orbit around the Pendulum (approx. 2.068 × 1017 periods of radiation oscillation of the quinpentaprotium-133 atom's ground state). This orbital period is mirrored by Lyriat around its sun Primos and Arcairion in its star system.

†1 galactic cycle is defined as the length of time taken by the Pendulum system to complete one full orbit around the core of the galaxy.

Dates are a somewhat lengthy concept in arc-time, written as a succession of increasingly general timeslices. Dates are written as such:

Times of day are written in an opposite manner, with progressively more specific timeslices:

The calendar of a standard cycle is typically set up in the manner shown below: 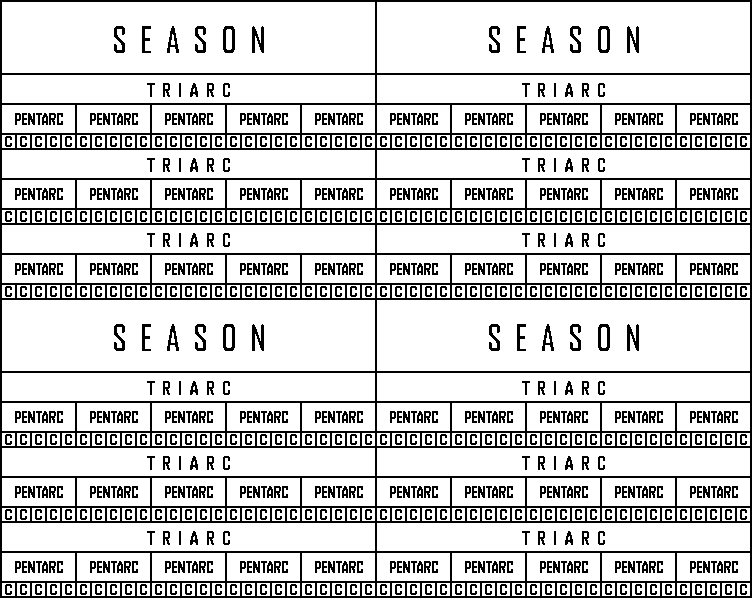 Four seasons, three triarcs to a season, five pentarcs to a triarc, and five circs to a pentarc.