Adriel (Known as Adriel Noctisol pre-ascension) is the demigod Patron of Death, Love and Loyalty.

Adriel is a Black Mancer, capable of taking away and giving life to anyone he chooses.

Despite being rejected by Finn, Adriel is still devoted to loving and protecting her.

As the Patron of Death, Adriel can revive the dead. Adriel is arguable the easiest demigod to commune with, as he has remained in the Mourner's Ring since Finn disappeared. A temple has been built next to it for protection, as well as housing monk worshippers. However, just because Adriel can be reached by an ordinary person does not mean every wish will be granted.   To ask Adriel for a favour, the following steps must be followed:

Adriel Noctisol was born into a very minor noble family, and was sent to Inverell Academy to learn Mancing. He proved to be incredibly adept at learning Mancing, indicating he would be a powerful Mancer in the future.   During his time there, Adriel rarely interacted with the other students and caught the attention of Silenda Sicarius, Patron of Assassins with his immense amount of magic power.        Guildmaster He fled to a small town called Indrik, where he founded the Onyx Drakes guild. The guild is located under a bar called The Twisted Wyrm. He recruited many members, including the talented assassin Dark Mancer Logan. He perfected his Death Mancing, but remained in hiding. He slowly drained the power of the guild members to retain his youth. At around 100 years old, through his spy at Inverell Academy, Adriel learnt of another potential Black Mancer. Kiara Aulumn was identified by the newly-invented Inquisitor's Orb. He proceeded to befriend her while maintaining his cover, and invited her to join him at the guild with the promise of being taught Black Mancing.

Kiara agreed to leave Inverell Academy to join the Onyx Drakes. Her and Adriel grew very close during her training period. Despite Adriel being over 100 years old, he maintained himself physically at 30 years old. Understanding that she can also be immortal if she chose to be, Kiara partnered with him as she entered adulthood. It is rumoured that he was manipulating her into helping him revive the Great One Of The North, a mountain-sized dragon skeleton. Additionally, the Onyx Drakes were also rumoured to be a cult that would sacrifice themselves for the dragon’s revival. Worshippers of Adriel fervently disagree.   ASCENSION Eventually the Headmaster of Inverell Academy at the time, High Gold Mancer Silas, tracked down Kiara. Silas and the rest of the High Gold Mancer council fought Adriel on the Plains, and Kiara sacrificed herself to save him. The High Gold Mancers were shocked, as they believed Kiara was kidnapped and didn't realise how much she cared for Adriel. Adriel immediately ran to her, proceeding to suck the life out of the High Gold Mancers, as well as a large circular area of grass.   Adriel did not care for his own safety when attempting to revive Kiara, and collapsed as breath returned to her. Kiara was taken away by the High Gold Mancers, never to be seen again. When Adriel awoke, he remained in that circle weeping for two months straight, earning the location the name “Mourner’s Ring.” It is unknown whether Ortuni granted Adriel immortality or whether he is sustaining himself from the energy of life around him. All that is known is that Adriel has lived for centuries, and has become gaunt and pale for refusing food. Ortuni   Physical Description

Build 6'6'' and thin.   Hair Dark brown, short.   Facial Features Very sharp and severe features, pale green eyes, close shave.   Clothing Varied from day to day, tended to be both practical and stylish.   Tattoos Adriel has all ten tattoos on both arms in an anti-clockwise rotation.

Always wearing a black hooded cloak, obscuring his features. He is pale and thin, as he refuses to physically consume food.

Despite having a very charming personality, Adriel does not like large groups of people, particularly parties. He rarely gives away information, and is usually cold, but has a tender heart.i 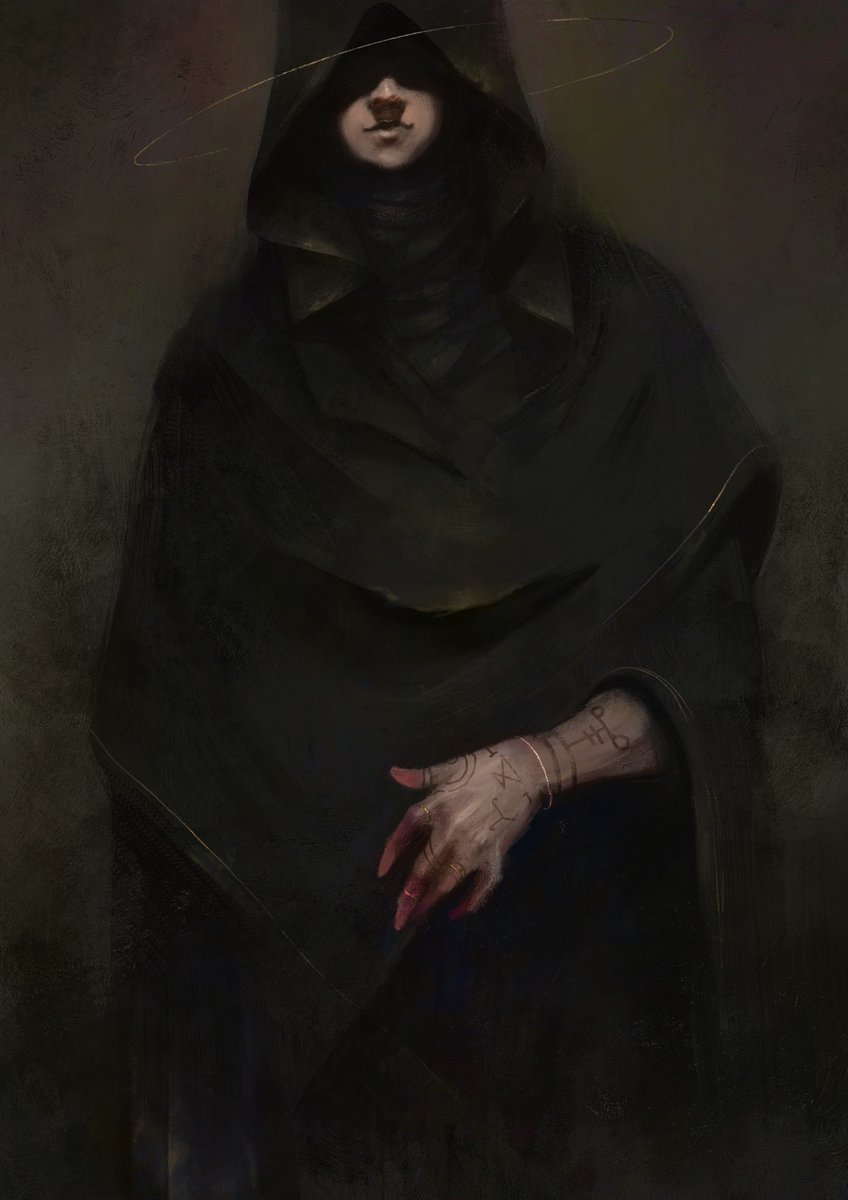 by Caio Santos
An illustration of Adriel post-ascension.
Children