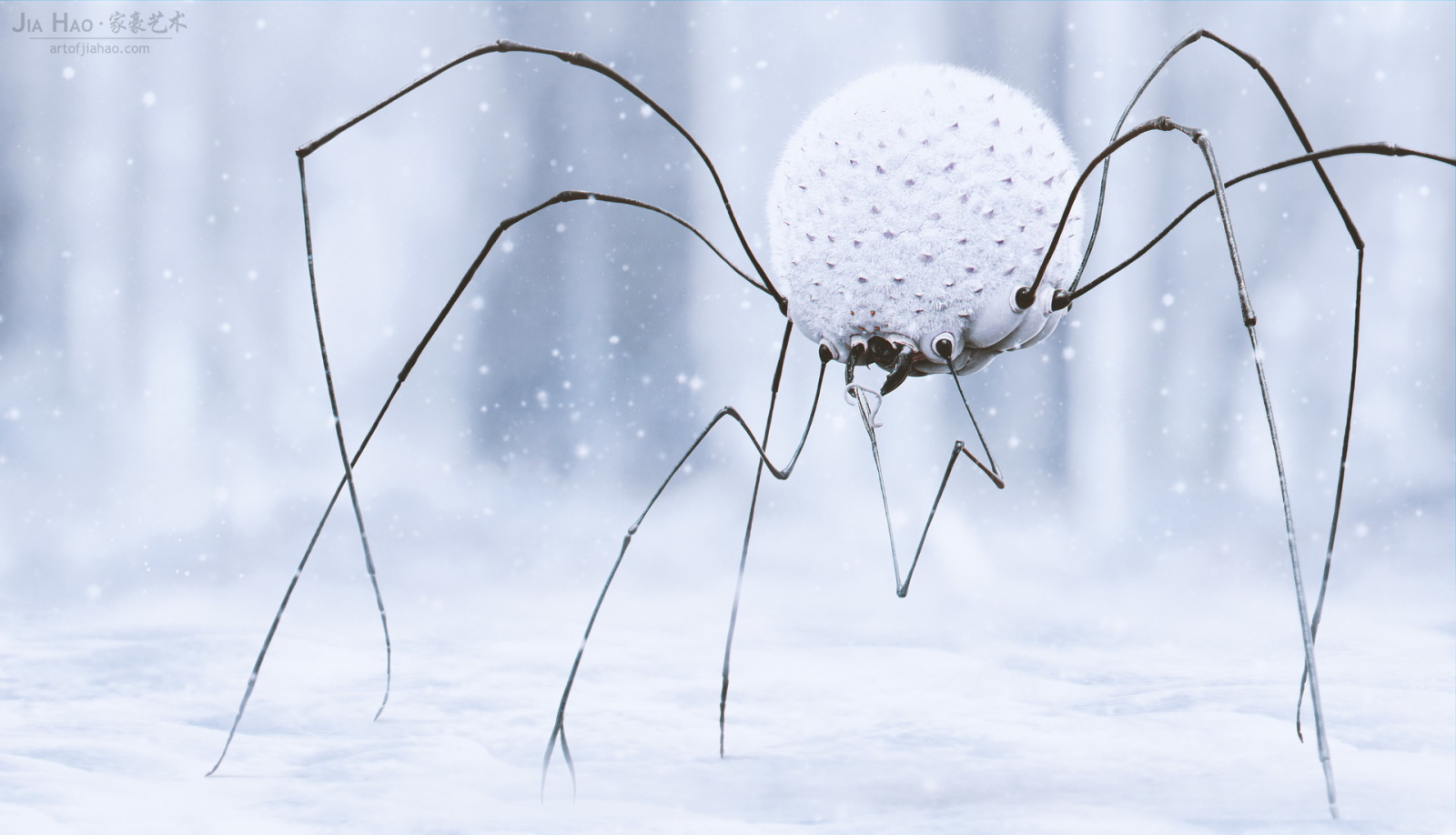 If I ever eat another one of these, it'll be the end of me.
— Senchai, Blight-tracker

Snow Spiders are small furry arachnids, native to the cold parts of the Surface and the Outer Shell. With a coat of warm fuzz, the spiders have managed to make a home for themselves across regions like Phrojhana and Hela , able to survive even the harsh seasons of dark within their insulated nests. Communal, docile, and relatively harmless, they are common both in the wild and among spider-ranchers, valued for the useful fluff and blubbery meat.

Snow Spiders are small, fur-covered arachnids, with eight legs with paddle-like feet and two long flexible arms. Unlike many spiders, their body is not segmented, but a single roughly spherical blob of meat and fur. Their fur is colored stark white and puffy, allowing them to blend into snow and frost. It is soft and dense, covering pale grey flesh of the Snow Spider like a coat.

by Rock Cafe.info
Snow Spiders have a wide maw with blunt teeth used for mulching food. A secondary set of mandibles hold the spider's venom, delivered through sharp needles that extend when the mandibles bite.   The venom of a Snow Spider is very mild, suited only to immobilize small prey. To other creatures, the venom causes only numbness and discomfort, though swarms of Snow Spiders have been known to bring down humans through a thousand poisonous bites.
They range in size from a few inches to a foot across for the oldest, while newborn Snow Spiders are diminutive. Arachnid-ranchers often compete to see who can breed the largest Snow Spider, with particularly impressive specimens often becoming closer to pets than livestock.

If we were half as organized as them, we'd be much better off.
— Senchai, Blight-tracker

Snow Spiders are relatively docile creatures, preying on small insects or feeding off fungi, moss, and lichen. They're more likely to flee than bite if disturbed unless cornered. Only if their hives are attacked do Snow Spiders become aggressive, swarming over their attackers until they are dead or have fled.
Communal creatures, the Snow Spider live together in nests made from webbing. These hives can hold up to several hundred spiders, with large hives growing to the size of boulders.   Snow Spiders will weave bits of flora into their nests and encourage them to take root. Small patches of moss or fungi often dot the exterior of a nest, while more elaborate gardens are grown deep within.

In the Outer Shell, the Snow Spider hives often become covered in fungi and mushrooms, replacing the camouflage offered by snow on the Surface.

In the wild, Snow Spiders hunt by ambushing prey. They hide in snowdrifts and pounce to bite, before dragging their victim back to the nest. When they aren't hunting, Snow Spiders forage moss or lichen, or work to maintain or expand the nest.

Short and to the point, like life should be.
— Senchai, Blight-tracker

Snow Spiders have little ceremony when it comes to mating, gathering deep within the hive to pair off without consideration for rank or order. Eggs are deposited in the same chamber, tended to by the entire nest as a whole. Newborn spider hatchlings are tiny and furless, unable to survive outside the nest, relying on regurgitated food from the rest of the hive.

by Rock Cafe.info
Hatchlings grow fast, reaching adulthood within a few weeks, and stop growing after a few months. As they age, Snow Spiders begin to spend more time within the hive, and their fur begins to lose its luster.   At most, Snow Spider live up to two years. Those raised in a ranch sometimes live longer, unless they are harvested for food.
Once claimed by age, dead members of the hive are dragged down to one of the nest's garden and deposited there to be consumed.

The walls and the floor were crawling, like it was alive. Every inch of it, covered in spiders.
— Senchai, Blight-tracker

Snow Spiders are ranched in settlements on the Surface or in the Outer Shell. They are raised for their fur, harvested to make threads of fabric for a wide range of textiles, and for their meat. Their communal nature makes them easy to raise in great numbers, and their poison is mild enough so that fatalities are relatively uncommon.

The taste of a Snow Spider is characterized as pleasantly chewy.

Shearing the spiders is a laborious and unpleasant task, one where most workers receive the greatest share of bites. Many ranchers chose to kill entire hives by suffocating them with either smoke or smothering than try shaving a squirming mass of spiders.   Once harvested, the spider's coat is spun into threads and from there made into thick, warm cloth, though it rarely maintains its white sheen for very long. Most dye the cloth to better hide filth, and it is a sign of considerable wealth to be able to wear a pure white outfit.

by Rock Cafe.info
The spiders are usually fed a mix of lichen, fungi, and offal from other livestock. Even corpses are sometimes ground down and mixed into the spiders' gruel, though some maintain that giving the beasts a taste for human flesh is bad luck.

Ranchers often compete to see who can breed the largest individual snow spider. Such prized pets can become the centerpiece of a ranchers' entire operation, acting more as mascots than livestock.

The Surface   The Snow Spiders are native to the Surface, a blasted wasteland of continent-spanning storms and blistering Blight. They share their home with strange and terrible beasts beneath the bleak sunlight and malignant stars. On the Surface, humanity are but unwanted visitors.   Read More About The Surface

Snow Spider venom is sometimes used to create powerful spirits, mixing them together with fermenting fungi in a closed casket. Brewers must take care to add the right amount of poison to the alcohol, or the whole batch is spoiled. Not enough, and the drink lacks the pleasant numbness of proper Spiderbite spirits, while too much can cause a drinker's throat to seize up.

The venom is also used by some Medikari as a painkiller, usually administered by live spiders.

Along with their gardens, Snow Spiders maintain tiny colonies of grubs, maggots, and other bugs, imprisoned within their nest for a later meal. Some ranchers swear that the spiders sometimes try to communicate with them - and fear that they are smarter than they appear.   Fanciful accounts told over drink speak of Snow Spiders working together to utilize small tools left behind. Others claim to have seen the inside of their nests and been reminded of their own city-states.

Working the coat of Snow Spiders into threads then into cloth is a time-consuming and delicate operation, not to mention tedious. Most weavers twine the silk with threads of fungi or mushroom leather or use the silk for the more decorative elements, both to reduce the labor required and stretch their supply of silk.

by Rock Cafe.info
The silk is expensive but relatively available in the Outer Shell, where most of the Snow Spiders are raised. In the Inner Shell, it is a luxury available only to the wealthy and powerful.

Snow Spiders are raised not only for their silk, but also as food. In the Outer Shell where the spider is common, they are a popular ingredient for a Chnagahn pot.

A clump of spiders are mashed together into a meaty paste, then kneaded into balls together with bits of fungi, mushroom. These are either hollowed and filled with mushroom or meat, then fried, or simply boiled and eaten whole.

Snow Spider hatchlings are tossed into a cauldron of oil and flash-fried, then seasoned with powder of fungi or salt. Typically eaten as a snack, especially during Saen-Kaw matches in the Outer Shell.

Some farmhands make a game out of seeing who can eat a Snow Spider, live and moving.

Spider silk is a profitable venture, exported as far as Mharaji and Dūbavum by caravanes that pass through the Sprawl and beyond.   Such wealth is not without consequence, as some ranchers have come to prefer feeding their spiders before their families, least their crop of silk wither and die.


Hey!   Your support means the world to me! If you liked the article, why not consider leaving a like, and a comment to let me know what you thought?   Thanks for reading!

Great article Q, I really like these "cute" fluffy spiders and the many different ways in which they are utilized by the people of Araea :D   Also, do Snow Spiders count as guided ammunition during a snowball fight?

Sadly (or perhaps fortunately?) the Snow Spiders cannot fly or guide themselves while tossed. ;D But I imagine pouring a bucket of them over someone makes for a fun pran!   Thank you <3

Now I want a fluffy Spider Bunny... An even more messed up version of Watership Down is now possible.

Watership Down with spiders?   I would read that book.

This spider is a freaking CUTIE

Poisonous fluffballs. The answer for when you need sheep but live in Araea. Do people count them to fall asleep?

Hah! That's an arachnophobes worst nightmare, I wager :D So maybe?   Thank you for reading and commenting <3

I like the slice of life examples. The only thing that makes me wonder is the sheering process. wouldn't killing the live stock be bad for business? Or once a spider is bald it is always bald and thus wouldn't have a silky use anymore?

It's basically expediency versus long-term business. Shearing individual spiders does indeed let you keep the spider and maybe shear it again later on, but it's also a huge pain in the ass when you're trying to process them in bulk. Killing half a hive and harvesting the corpses is a lot quicker and easier, even if it means you are down a bunch of spiders. Also means you get bitten a lot less. All details I should probably add to the article, in fact :D

Could they perhaps be smoked into drowsiness or sleep, like with bees? Or are they still to violent and difficult?

That's actually a really good point, yeah. I'll have to revise the article to make that an option - just better be done before they wake up!   Thanks! :)

Awww they're so cute! :D   I love all the little details about what they are used for in Araean(?) society, from their fluff to their meat. And I love the hints about them being more intelligent than people realise.   I especially love the idea of the spiders tending little gardens. :D

Tiny little garden, only a step away from tiny little civilizations, and then... Spider revolution!

Thank you! I'm glad you liked it :D

I can't believe something this CUTE exists in Araea! I need plushies of them!