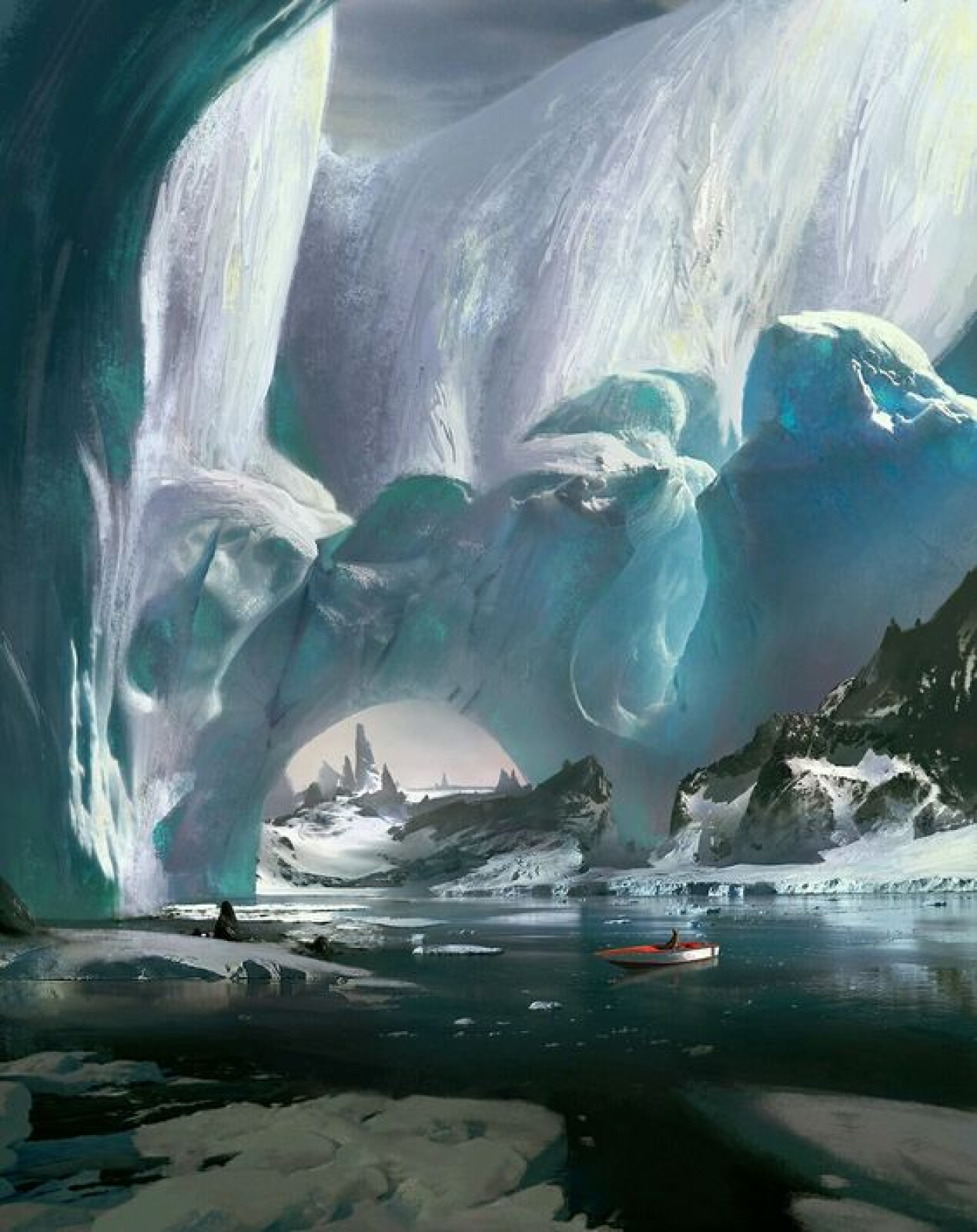 It's a great place if you are looking to freeze to death.
— Sencha, Blight-Tracker

A cold, unforgiving land, Hēla lies to the far south of the known Surface world. It is a land of snow, ice and stone, with mountains of ice and calderas of bubbling tar.

Like many parts of Araea, Hēla is barely explored. Between the lethal cold and the lurking threat of Blight, no one really know how far the unbroken expanse of ice truly stretch. Once passed the tundra that encircle much of the region, travel becomes difficult and few who have ventured into the glacial plains have returned.

Despite the cold, the tundras that surround the interior of Hēla is where most of its life is. It is a craggy domain of rock-strewn plains and withered hills, with a few ice-covered mountains. Snowfall is infrequent, but it is matched by the slow rate of melting and thawing even in the warmer months. Boulders or even hills of ice dot the landscape, sculpted by the winds and by wild animals.

by PlanetSide 2
The beasts and monsters that live here have adapted to the cold, either with shaggy coats of fur, insulating layers of blubber or more exotic means. Nothing is safe from freeze and even the creatures who grow up in the tundra sometimes simply freeze to death.

In the cold months, we've seen bats freeze to death, mid flight. It's so cold your thoughts turn to crystals in your head.
— Sencha, Blight-Tracker

Past the tundras, the ice begins. Ancient glaciers here cover the land and the ground itself it little more than snow-covered ice. The most common form of life here is the red algae that grows on top of snow or on ice. Some creatures from the tundras like the Goa Strider venture here to feed on the algae, while others make their nests burrowed into the glaciers.   There are vast mountains here, but they have never been scaled or crossed. Some consist entirely out of ice, enormous glaciers that have been in place since time immemorial.

Among the Phtangi, the far reaches of the Ice aren't just a physical place but a spirit realm of hungry demons and cruel punishment. The very worst criminals among them are sentenced to 'walk the Ice', never to return. It is a hell, with no great battles to fight and no terrors to overcome - just endless ice. 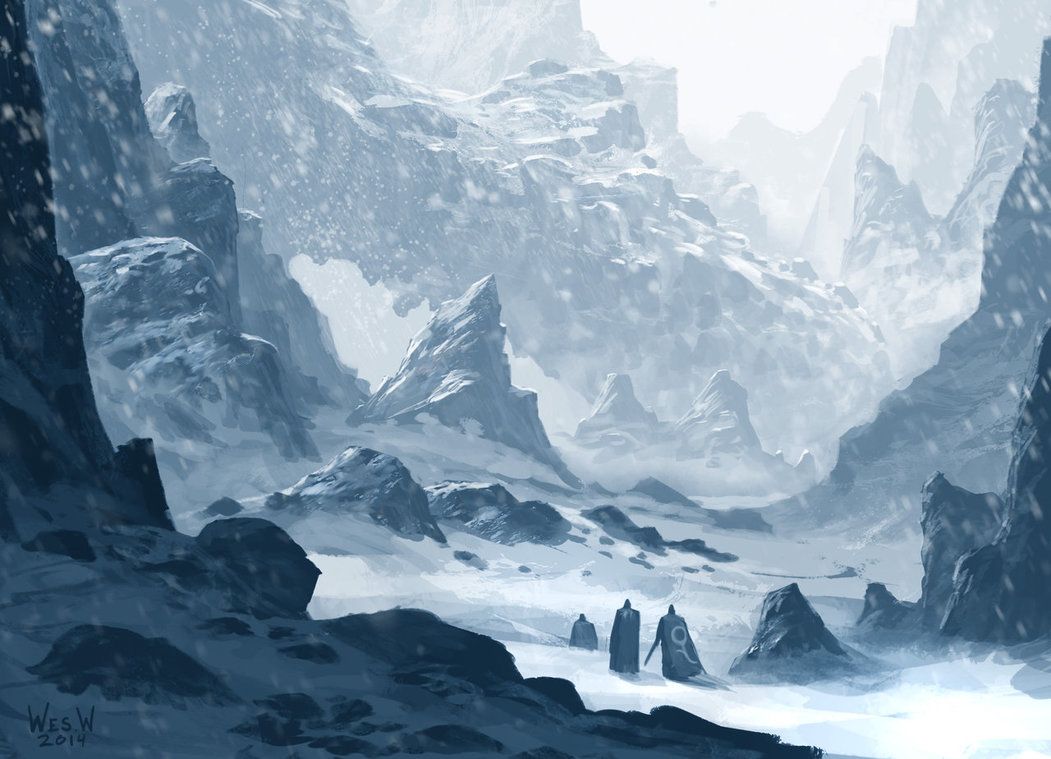 Spread across both the Ice and the tundra of Hēla, the Ṭhaṇḍu Lakes are the collective name given to all the waters of the Hēla region. These range from small ponds to large lakes covered by glacier. Immense fissures that carve the glaciers are filled with the frigid waters. The lakes are smaller and more shallow in the tundra, with a few being little more than shallow pools covered by a thick slab of ice. In the Ice, no one is sure how deep the water is or what manner of creatures that lurk there.   The Phtangi sometime venture to the Fissures to hunt seal, sea lion or other aquatic creatures for food, hide and bone. Doing so is risky, as the waters are cold enough to very quickly kill anyone who falls in.

The Phtangi have a saying: Hēla is a land that hates humans, but love the creatures that eat us.
— Sencha, Blight-Tracker

Like all regions on the Surface, it is an environment hostile to humans. Life native to Hēla have adapted to temperatures that would freeze an unprotected man solid in hours and learned to find nourishment in a landscape of unbroken ice and snow. Some, like the wandering Goa Strider, are sometimes tamed and used by the few tribes of Phtangi who live here or the expeditions of those who visit. However, most wild animals in Hēla see humans as remarkably convenient sources of meat.   The most common plant is the red algae on both tundra and on the Ice. The shrubs and grass that grow in small patches, while stubborn moss and lichen grow on every surface that support them. In the warm seasons when the snow slowly melt on the tundra, there are even flowering bushes and herbs. Like everything here, they have adapted to the cold, with shallow roots and fuzzy coverings. Plants can even grow under the snow, sending tendrils burrowing through so they can reach the sunlight.

Beyond the Phtangi, Hēla sometimes see hunters, prospectors and ice-miners. There are no permanent settlements here, only temporary camps established to harvest something of value during the months. Blocks of ice, tar, tusks and blubber from lake-beasts and so on all have their draw. When the winds turn and the chill hardens the ground, the wise make sure they have returned to the caves. That is not an option for the Phtangi, who suffer through the brutal winters.

Ever since contact between the Phtangi and the denizens of the caves was established, trade and generosity have done much to help the nomads. A few especially bad winters and not all are sure the Phtangi would remain in Hēla - a concern for the city-states with cave-entries close to them.

Much of the region is surrounded by the Shrouded Lands with only a few reliable paths out. Most who visit for either exploration or greed come through the caverns. Hēla may yet hold many secrets that wait to be found in the ice and snow.

The Surface   The Surface of Araea is a barren wasteland of continent-spanning storms and terrible radiation. The frozen lands of Hēla embody the Surface at one of its most extreme, with cold rock tundras and mountains of ice.   Read more about the Surface

Despite the dangers and the freezing cold, there is one group of people who live in Hēla - the Phtantgi nomads. Forced out of the safety of caverns blow by some ancient accident, they have been forced to eke out an existance on the frozen plains of Hēla for as long as they can remember. Always on the move from the backs of the Goa Strider native to Hēla, they criss-cross the frozen lands looking for food and shelter.   Read more about the Phtangi Nomads

Like everywhere on the Surface, Blight haunts the frozen lands. The levels are tolerable across most Hēla with a few areas known to be lethally blighted.   Others are less predictable, like rare but violent blizzards with blight tainting the snow.

The tundra of Hēla is not entirely devoid of warmth. There are several geysers, boiling springs and small volcanoes scattered across the vast land. Pools of bubbling tar can be found here and there, with some expeditions from both Phtangi and the caves going to them specifically to harvest the tar.

The Fissures   The canyons of ice in the glaciers are commonly referred to as "the Fissures". Some are dry, but most are flooded and are part of Ṭhaṇḍu Lakes.   These canyons range in depth from a few meter to the deepest recorded one of an entire mile, so far down into the ice that the sun can only barely be seen.

I very much like the way how you made the whole area feel like a deathtrap for all those who wander there. The pictures you chose also help a lot in that regard.   This leads directly to my questions though. The Pthangi seem to be the surface dwellers, and as such they show all kinds of badassery, because the surface in your world is not a nice place. Are there specialised Pthangi who survive just in Hela, or do they "visit" this place only if they have no other choice. Those that have lived (moved through) there must have developed some techniques that help, especially as they have no caves to return to (or do they? Money and hunted food / resources against shelter if things get too dire / cold… is that a thing Pthangi would do?). This i would like to read more about (the tricks of the Pthangi) Did they develop special clothes probably?

The Phtangi are generally confined to Hela and nearby arctic regions. The block to them talk about this stuff and more, though I don't really go into clothing, tools and technique beyond some generalities and their Striders. Maybe I should! :)   To answer in other: 1. They're pretty much confined to Hela and nearby region by intense radiation and completely murderous regions (like the Ice) 2. The people underground don't really let them in that much, because they're afraid they wouldn't leave again. They might try, though. 3. Well, special being pretty much like any other arctic folk. Parkas and other insulating things.   They're nomadic, so they move around to find pockets of resources or food. Only rarely do they have semi-permanent places they go back to. :)

2. The people underground don't really let them in that much, because they're afraid they wouldn't leave again. They might try, though.

Thats a good source of conflict, in which players could decide whom to help.

I think this is a very good start! Can you give me examples of the animals that survive by "more exotic means"? Do they use fire magic? Are they sentient ice blocks with no need for heat? Also, you don't need to use the tooltip definitions every time you say "Blight Tracker" or some such thing. Only the first time.

Anyways, it's nice to see some people fight it out and live on the surface. Even if its super duper cold.

this made me cold just reading it and i cant feel the cold. however howdo the creatures that live there do it? how have they evolved to live there?

Yep, they've evolved to live there. Much like how fish in the arctic swim in those waters or penguins survive in all the coldness.

Oy! Sorry that it took me so long, but here it is, finally D:   A good ol' icy region we have here! Let's get down to business...

Nothing is safe from freeze and even

sculpted by the winds and by wild animals

This is no biggie but I think that the 2nd "by" could be removed. :)

There are no permanent settlements here, only temporary camps established to harvest something of value during the months.

Not sure what the months refer to ; If you wanted to say whatever time needed to harvest, you could say "a few months"   Aside from that, I think you could benefit from Ademal's suggestion on stream to break your sidebars for each title you have.   If you need stuff to expand it, think about using article-blocks. And if you really run out of stuff to say, consider using the full footer to avoid leaving the empty space on the right. You can then break the overly large column by adding quotes and pictures on sides.   Gutto job and gud luck !

I loved the quote about the land hating the humans! yeah, eat them! XD

Its a bit of a theme in Araea :D