Hey Dave can I borrow your grill next weekend?
— Cul De Sacula

A-1031— known as Cul De Sacula— is a powerful vampire thought until recent events to be no more than myth. Originally born in the year ███ in a small village of ████ylvnia, he has, through unknown means, become eternally trapped within a cul de sac located somewhere currently unknown to the ACF.   His powers of persuasion— more accurately referred to as hypnosis— have lead to a long-lasting cult following— that of the literal cult known as the Cult De Sac. Any personnel with information on A-1031's whereabouts are to report them to Investigations immediately. 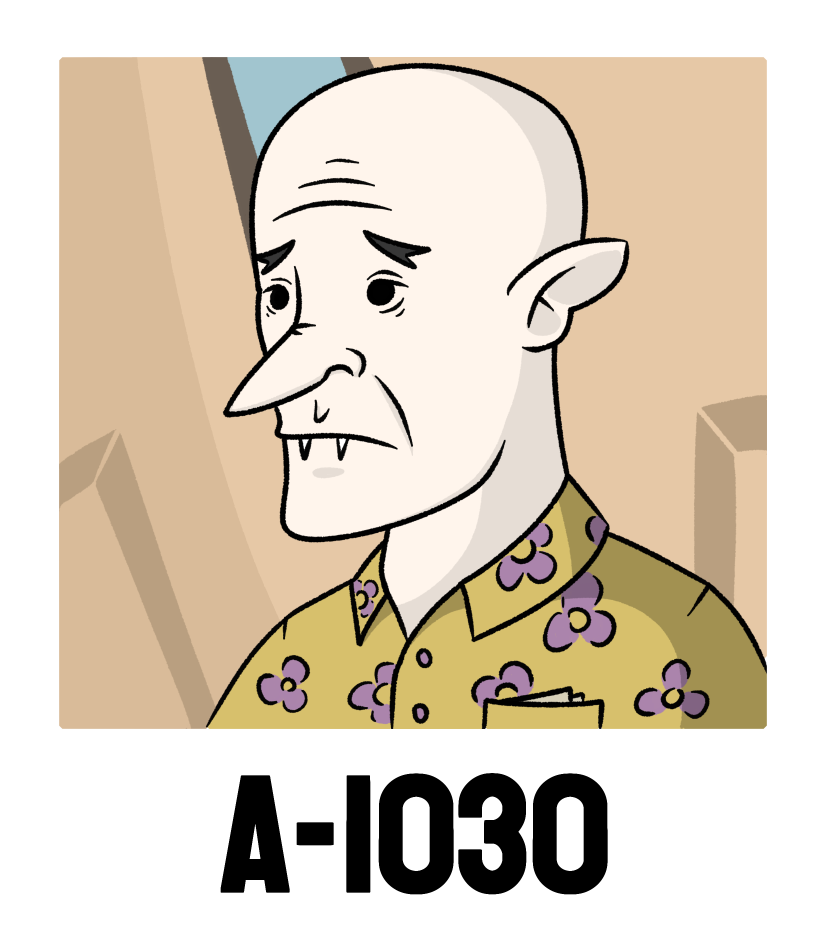 A-1031 appears to be a thin, weak, middle-aged man who I could absolutely beat in a fight. Just. Snap him like a twig. I'm gonna ███ his ████ ██ ██████! Note: A new team member was assigned to write this report following the discovery of the previous' clear bias. Despite his appearance, however, it is reported that A-1031 possesses extraordinary strength and is very handsome and... Note: Yet another team member was assigned to finish this report after the previous was discovered to be under A-1031's hypnotic spell. A-1031 appears to be an exceptionally pale Eastern-European man, with pointed ears, a bald head, and two large fangs. All sightings of A-1031 report him wearing a Hawaiian shirt, khaki shorts, and black velcro sandals— regardless of the weather.   A-1031's abilities differ from vampires seen in popular culture, he cannot transform into a bat, and seems unbothered by sunlight— save for a tendency to receive sunburns quickly. He can, however, transform his nose and ears into those of a bat— which without access to A-1031, we can only assume grants him both greater smell and hearing. It does appear that he subsists entirely on human blood, as well— as he has been seen drinking a red liquid from his favorite "#1 Vamp" mug on repeated occasions.

A-1031's most concerning ability is his power to enthrall the living. Recovered victims have been unable to say how, exactly, they were enthralled— but it operates all the same. Thralls of A-1031 carry out his will without question, and are able to enthrall others as well. This leads to a terrifyingly rapid-growth of influence. Those enthralled by A-1031 may remain so throughout their entire lives, which allows him to hibernate and return to find a sizable following awaiting his orders— regardless of how long he rests.   It is currently unknown just how many remain enthralled by A-1031, simply that they are a global threat. The ACF assumes their number to be diminished after the events of 2020, further proven by the drastic reduction in the Cult De Sac's activity.

Incident #1031-3
Date: 2020/10/23 - 2020/10/31
Location: GLOBAL
Personnel involved: ███
Civilians involved: Currently unknown number
Note: Many personnel were compromised in the events of 1031-3, as such, this summary may not include the entire truth given our untrustworthy sources.
A-1031 returned from a long period of rest, during which, he had instructed his thralls (the Cult De Sac) to build cul de sacs around the world. The construction of said cul de sacs were coordinated to create a series of runes scattered across the globe that, when met with the full moon destined to appear that Halloween— a day with anomalous properties all its own— and the proper rituals, would transform the entire earth into a single cul de sac. A-1031 believed that he would effectively be freed from his curse if this was successful, allowing him to roam the earth as he pleased.   His thralls began to enthrall many across the world in order to perform the rituals required for this transformation. This, unfortunately, included ACF personnel. Soon after, enthralled personnel began to neglect their duties and even sabotage our efforts to thwart A-1031's plan. Thankfully, through the hard work and effort of those who remained, we were able to break most ACF personnel from A-1031's spell and prepare to destroy key cul de sacs across the world.   Then A-1031 caught COVID, which was shortly thereafter discovered to have the previously unknown side effect of nullifying magic entirely— most importantly including the transformation. Logs from the events have been archived and can be found below.

Bit late but here's the Halloween epilogue! Thanks for sticking around!

COVID nullifies magic... I may have to steal that somehow. These were brilliant. Thank you for all the entertainment from this series!

And thank you for the kind words!

Great epilogue! I love the art of Cul de Sacula. He looks like a generic character from an American tv show set in the suburbs. :D   Thanks for this series - it's been brilliant!

Hopefully the tears aren't because Cul De Sacula said something rude again.   Thanks!