A-3220, known to most as the "Bone Bandit" is an elusive figure that appears worldwide in order to steal the fallen teeth of children and adults alike. No matter where, when, or how a tooth is lost— one can be certain, and afraid, that A-3220 will shortly arrive. 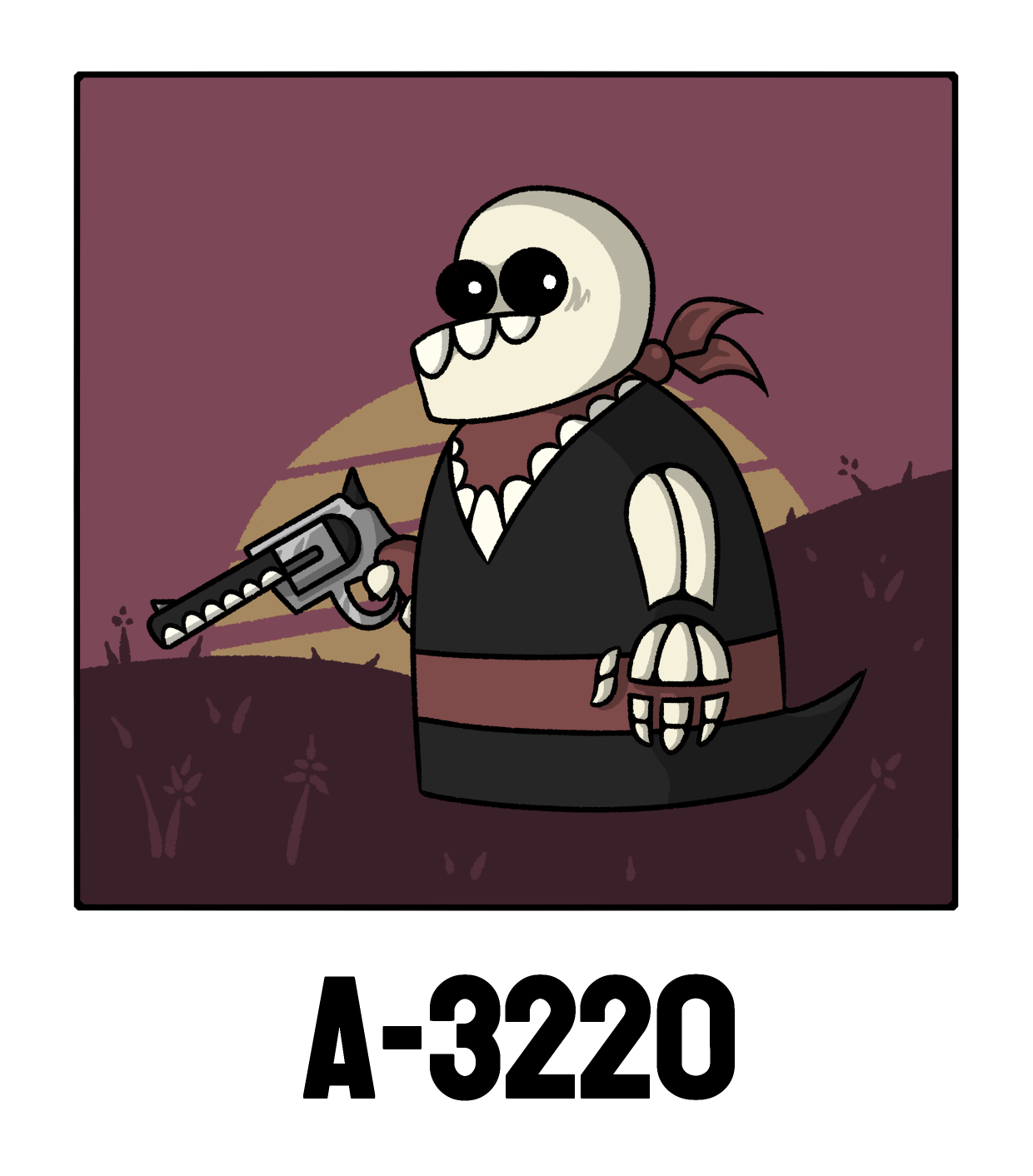 A-3220 appears as a short, stocky skeleton with glowing white "irises" within their eyesockets. A black robe covers most of their body, and is held to their form with a red belt. A red bandana with a tooth pattern along its edge is tied around their neck— which A-3220 has been heard referring to as their "bonedana." No matter when or where they appear, they always carry their trusty "gum," a thick revolver inlaid with a pattern of teeth along the bottom of its barrel. Bullets fired by this "gum," appear to be teeth. Whether or not these are the same teeth pilfered from their victims, or their own, is currently unknown.   Whenever someone loses a tooth, regardless of their age, location, or the method through which the tooth was lost— A-3220 will appear somewhere near the lost tooth under the cover of night. They will never appear next to the tooth, only somewhere within 100 - 500 ft. away— meaning that they must approach the tooth to acquire it. They will stop at nothing to obtain a fallen tooth, often brandishing their revolver in order to dissuade victims from hiding their teeth. Those who refuse, if caught, are not shown mercy— A-3220 is responsible for hundreds of deaths every year worldwide.

Shoulda given me yer teeth.
— The Bone Bandit

Something To Chew On

Particularly brave or stupid souls may decide that they really want to hold on to their lost teeth— and take extreme measures to prevent A-3220 from obtaining them. These people will lock their doors, shutter their windows, and retreat to their basements— often laying myriad traps to stop or slow A-3220's pursuit, should it get into their homes. Wealthier and crazier people may purchase or sell access to bunkers and other defenses for the express purpose of holding on to one's pearly whites.   A-3220 cannot be killed, yet alone harmed in any meaningful manner. Thus, the best methods are those that block or slow their efforts, rather than those that attempt to destroy them. Lucky souls who manage to avoid their skeletal pursuant til sunrise will be able to hold on to their precious bone-jewels— at least, until they lose more.

I don't understand it, why would anyone refuse to just hand over their blasted teeth? What do you need them for?! Look, I can't tell you what that skeletal psychopath wants with them— but clearly they need them far more than we do.
— Bin Folks, Administrator

While a single instance of A-3220 may be captured, be it via a cage, deep pit, or comical trap— A-3220 can appear in many places at once, making containment impossible via any currently known methods. This, and, whenever sunrise arrives— any captured instances of A-3220 will disappear.   The best method for handling A-3220 is, unfortunately, to simply hand over any lost teeth. After which, they will thank you, and disappear.

Thanks fer the teeth.
— The Bone Bandit

Experiment #3220-25
Date: 1993/04/13
Head researcher: Dr. Washington
Subject: Lemming
Description: Subject was placed in the center of an elaborate maze that encompassed an entire facility. This was replete with pitfalls, traps, fake-outs, and more. Shortly before nightfall, a tooth was removed from the subject's jaw.
Result: A-3220 appeared shortly after nightfall, near the maze's entrance. Whether or not they were irritated by this, we could not tell. They fell into one of the maze's many pits a few hours later, and disappeared at sunrise.
Notes: Replicate test with the same subject to see whether or not A-3220 can remember the maze, and nagivate it faster next time.     Experiment #3220-30
Date: 1993/04/19
Head researcher: Dr. Washington
Subject: Lemming
Description: The very same subject from experiments #3220-25 - #3220-29 was placed at the center of the very same maze, and another tooth was pulled shortly before nightfall.
Result: A-3220 appeared shortly after nightfall, near the maze's entrance. This time they nagivated the maze with record speed, and finally reached the center— however, our subject refused to hand over their tooth, stating that "I only have so many left..." at which point A-3220 silently pulled out their revolver. Subject continued to refuse, until they were put to rest.
Notes: Switch subjects between any future experiments, to ensure minimimal tooth loss.     Incident #3220-30
Date: 1945/4/30
Location: Berlin, Germany
Civilians involved: Man 1
While we do not have a minute-by-minute written log of the event in detail, we have enough information to catalogue this incident. Man 1 was hiding within a bunker somewhere in central Berlin, after the loss of a tooth— hoping to hold on to the precious relic. Unfortunately, however, one of their bunker-mates decided to open the bunker door for some fresh air after night had fallen. None could stop A-3220 as they forced their way inside, and shot Man 1 after his stubborn refusal to hand over his tooth.   -End Logs-

I wanted to know what the fairy has to say about the incidents with children involved. You are not going to tell me that the tooth fairy doesn't exist, right?   I'm guessing the subject in experiments 3220-25, 29 and 30 wasn't exactly voluntary.

Sorry to say, but in the world of APRA, this *is* the tooth fairy, effectively.   I'm not 100% certain on that but I'm close to it. I may change my mind later, idk.   The experiments were voluntary! They bribed him with ice cream after each one, except the last for...obvious reasons.

I totally expected the first answer, but the second surprised me :D

Well, childhood must be fun when the primary teeth start falling out...   Huh. I wonder if any kid ever tried to befriend the returning visitor, rather than be scared of them? "Mommy, I've lost another one! Can I stay up late? Pretty please? I wanna set up a tea party for when they come to collect it..."   (Spotted two typos: "chilrden" instead of "children" in the introduction, and "dissaude" instead of "dissuade" in the anomaly description.)

I'm sure some child has! I debated a good bit about how many incident logs to put in as there are soooooooo many things that'd happen with them— eventually I concluded that it was best for logs to just be especially notable incidents rather than every single one.   Typos bashed, thank you!

The tooth fairy was already terrifying XD bonedana got a good laugh. The fact that he has so many deaths under his belt makes me wonder why so many seek to hold onto their teeth. Like hey man, sure, take it. Lol the quotes really say it best. He clearly needs them more than you. Just... just hand them over.

Seriously, I don't get it, just give the gun wielding magic skeleton your teeth, it's not worth it.