Content Warning
Jesus jokes abound. Potentially offensive to Christians. There will be other articles you can enjoy instead if that's the case!

Watch as the creature emerges from his cocoon, performs miracles, gets crucified, and is resurrected! Over and over and over again!

"Jesus Christ, there's no way that's Jesus Christ!" We hear you! We could barely believe it ourselves when we found the inspiration behind the stories— the real-life Jesus. He was not, in fact, buried in Golgotha— instead having been left in the Judean Desert where none would find him. There, for the past 1987 years, he has died from thirst and reemerged from his cocoon month after month— until now! Now you and your family can witness the creature that inspired the holy man in the bible, his miracles, his crucifixion, and his resurrection!

Jesus is not, in fact, a man— though we cannot disprove the claim that he is the son of god either! Instead, he appears humanoid, emaciated with tan, leathery skin and legs longer than any normal human's. Bright yellow eyes without pupils peer out at something unseen, and his famed white and red robes depicted in paintings throughout history? Those are skin flaps! We don't know what they're for, but our best guess is that they help to keep the sand from irritating his body. The famed beard and hair, too, are not as previously thought— they're more like elaborate horns! 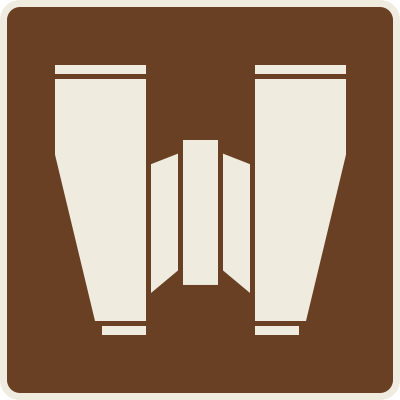 He's unable to notice camera flashes, so flash away! Just make sure not to tap on the one-way glass around his enclosure. Our handlers dress as Roman soldiers whenever they enter the enclosure, as he goes into a fearful state that causes everyone in a mile-wide radius to sweat blood if he realizes he's in an unfamiliar world.

Witness Christ perform amazing, unexplainable feats! Every morning our staff leave a basket with only the tail of a fish and breadcrumbs by Jesus' nest, after they leave, he will take these and turn them into an entire fish and loaf of bread which he will then devour whole! Every other day we place the basket on the other side of our artificial river— which he has no choice but to walk across! A miracle performed for your enjoyment!

Sir, I understand that he may not be dangerous but think about the potential backlash. Would people riot? What if the church takes legal action?
— Ash Ngo, APRA Director

Ash, the Vatican is paying us for this one. Don't ask why, hell if I know. Ha! Hell. Anyway, you're going to love the ideas I have for the gift shop...
— Bin Folks, Administrator

Returning visitors will find that Jesus lives a cyclical life, a cycle that lasts about two weeks (15 days) in total. For much of it he eats, sleeps, and roams the desert around his nest in silence. On the 10th day, however, he crosses to the far end of his enclosure, kneels down by a twisted obsidian obelisk, and appears to speak to himself for a 12-hour period. After this— he will find a way to kill himself, unless our handlers enter the enclosure and reenact the crucifixion. We only perform family-friendly crucifixions so that the whole family can enjoy them! Rather than nail him down— we tie him to the cross with softened leather straps! The crown of thorns doesn't harm him since he can't feel anything on his hardened hair-horns. By the end of the six-hour period, during which he will continue to speak to himself as lightning strikes nearby, he will die peacefully.

You can buy pieces of these cocoons (Sold as "Jesus Pieces") at our gift shop!

Our handlers will then remove him from the cross and bring him to our replica Golgotha— which has one-way glass walls so you too can witness his resurrection! His skin-flaps will harden around his body, and after 4 days he will emerge from this skin-cocoon— alive once more!
Crucifixion Corral
Open full size

I'm Bishop Ratham Aberdaxie, and I fully support the Corral!   Nothing but clean, family-friendly fun to be found here!   If you're nervous about your eternal salvation being threatened by your visit, please, find me or one of my brothers in the information booth where we will give you a blessing of protection!*
— *For a small fee of 106₪

Come on down to the Calvary Cafe! We have many delicious baked goods worthy of the savior himself!* Try our naan! Lucky customers may find Jesus' face on theirs— granting them a free coffee! We also serve crucifix breadsticks, which you can enjoy while seated on our cross-shaped chairs! *We are no longer allowed to feed him
There are many exciting activities for you and your family to enjoy at Crucifixion Corral! Take the kids to the Golgotha bouncy house, or come to our Holy Waters Pool where you can try to walk on water and cool off from the desert heat! Especially adventurous visitors can join one of our five daily scheduled mock crucifixions! Participate as either a Roman soldier, or pay extra to be crucified yourself! It's a wonderful photo opportunity!   We have special park-wide discounts during Christmas and Easter, during each we decorate the park and have special performances! During Easter, can you spot Judas among the crowd and stop him before it's too late? Doing so gets you free naan at the Calvary Cafe! Around Christmas we have nativity plays! 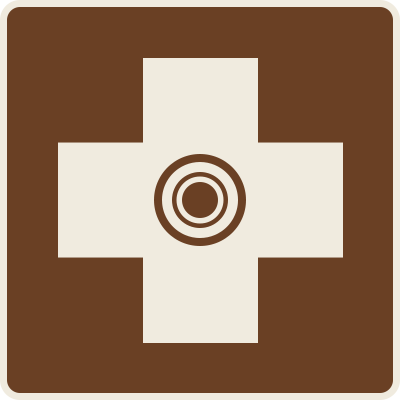 Jesus reacts violently to sin, foaming at the mouth as lightning strikes the sinner from above. So please, refrain from committing biblical sins. Fathers, please do not wear socks with sandals in the park, as this too is considered by him as a sin. For your safety and ours, we limit purchasing at the Calvary Cafe.   You will be escorted out of the park if you are found circumventing this, or attempt to sin on the premises. Management can never set foot in the park, after our previous director was smitten for discussing business within the park, so you must contact them via our support desk.   If you spot a large man wearing robes, sandals, and sporting a large white beard— please alert security immediately so that he can be escorted off the premises. He is not god, but a mentally ill man who believes himself to be. Please do not worship him.

Stop by our gift shop!

You'll find it by the entrance, it's the brown-painted building shaped like a cross!   You can buy all sorts of goodies here, from Jesus Pieces, locally sourced wines, and crucifixes to Calvary playsets and cross-crackers for the kids!   Get a souvenir for a loved one! We have snow globes and will print photos from the mock crucifixion for you!

Number of Incidents: 5
Threat Level: Rust
Only a handful of incidents have occurred since the park's opening, and only one since we stopped allowing visitors to join in the actual crucifixions. While there is a danger of death, it's something we can easily avoid. Please see the incident log below.   Incident Log for A-888#
Incident #888-1
Date: █████████
Location: Walking Waters
Personnel involved: None
Civilians involved: Man 1-9, Woman 1-12, Child 1-15
Reports on the incident vary, but from careful interviewing and observation, we can narrow it down to this— Man 1 saw Woman 2's swimming clothes and envied them, prompting A-888 to smite him while he was still in the pool. This, unfortunately, electrified the water and killed 7, while injuring 5 other civilians.   Note: Security was given a lengthy presentation and booklets on sin after this incident, so that they can better prevent similar events from occurring.     Incident #888-3
Date: █████████
Location: Little Cavalry
Personnel involved: Security 1
Civilians involved: Man 1-3, Woman 1-2, Child 1
Video log
Note: Recorded by security cameras in the enclosure. This occurred while visitors were able to pay to join in crucifixions directly involving A-888, an activity that ceased after this incident.   -The group is dressed in mock-Roman attire, walking at a steady pace towards A-888, Security 1 is in the front, Man 1 walks up beside him.   M1: Hey, do you ever wonder if all this is inhumane?   S1: I came here hoping to make his suffering...less. I'd like to think I'm helping...in some small way at least.   M1: What if...what if someone got him out of here?   S1: That would be a death sentence.   M1: And eternal damnation isn't?   -S1 stops to think for a moment. They trace cross over their chest.   S1: Alright. Fine. And what would you suggest be done about it?   M1: We carry him. We'll blow a hole straight through the northern walls and get into our van— we've got it all planned out and ready to do now. This cannot continue.   -The group approaches A-888, and carry him gently. Child 1 is given plastic explosives, and told to place them along the wall ahead of them. They run off to do so. The group talks softly, the only audio here is from Security 1's body camera.   S1: I can't...I can't believe I'm— we're— doing this. I'll lose my job...but it's what any good Christian would do, right?   (pause)   S1: Hey— we'll need to blindfold him so he doesn't go crazy when he sees what's outside.   -S1 tears a piece of cloth off of their armor and ties it around A-888's eyes. A-888 groans in response, but doesn't struggle.   W1: The kid's done down there— are we ready?   S1: We need to run as soon as it goes off, understand? I'll carry him on my shoulders, one of you get his legs from behind me alright?   -They shuffle around as A-888 is lifted onto S1's shoulders, and M2 takes A-888's legs. Child 1 returns, the group silently nods. Someone activates the explosives, M2 loses his grip on A-888 as S1 runs forward and then falls on his face under the weight of A-888.   S1: OH GOD, NO!   -A-888 groans loudly, and begins to foam at the mouth.   S1: WAIT, NO— I DIDN'T MEAN—   -Lightning flashes, striking S1 after piercing A-888's body. M2 and W1 are injured.   M1: No, no, no...!   -M1 rushes to check A-888's pulse, bringing a hand to his throat, and each wrist— coming away dissatisfied each time. He turns to the group.   M1: HE'S DEAD! WE GOTTA GET OUT OF HERE!   -The group sprint away, leaving S1 and A-888 behind.   —End log—   Note: Repairs took 3 months, during which the park remained closed. Personnel assigned to Crucifixion Corral are now screened so that none are of Christian faith. Security has been increased, with a task force stationed nearby to intercept further attempts to free A-888. Visitors are no longer able to participate in crucifixions.

It is in my opinion that this attraction remain operational. Not only do we make a considerable amount of profit from it (notably thanks to the Vatican's backing), but there has been more and more time between incidents as time has gone on, clearly showing that we have gained a better understanding on how to contain A-888 within this setting.
— Bwanbale ████, Viability Reviewer

Frankly I'm Christian and I found this hilarious. Top notch random comedy! Do something to do with the Queen Elizabeth II *evil British laughter here*

Thank you! Maybe eventually I will, who knows?