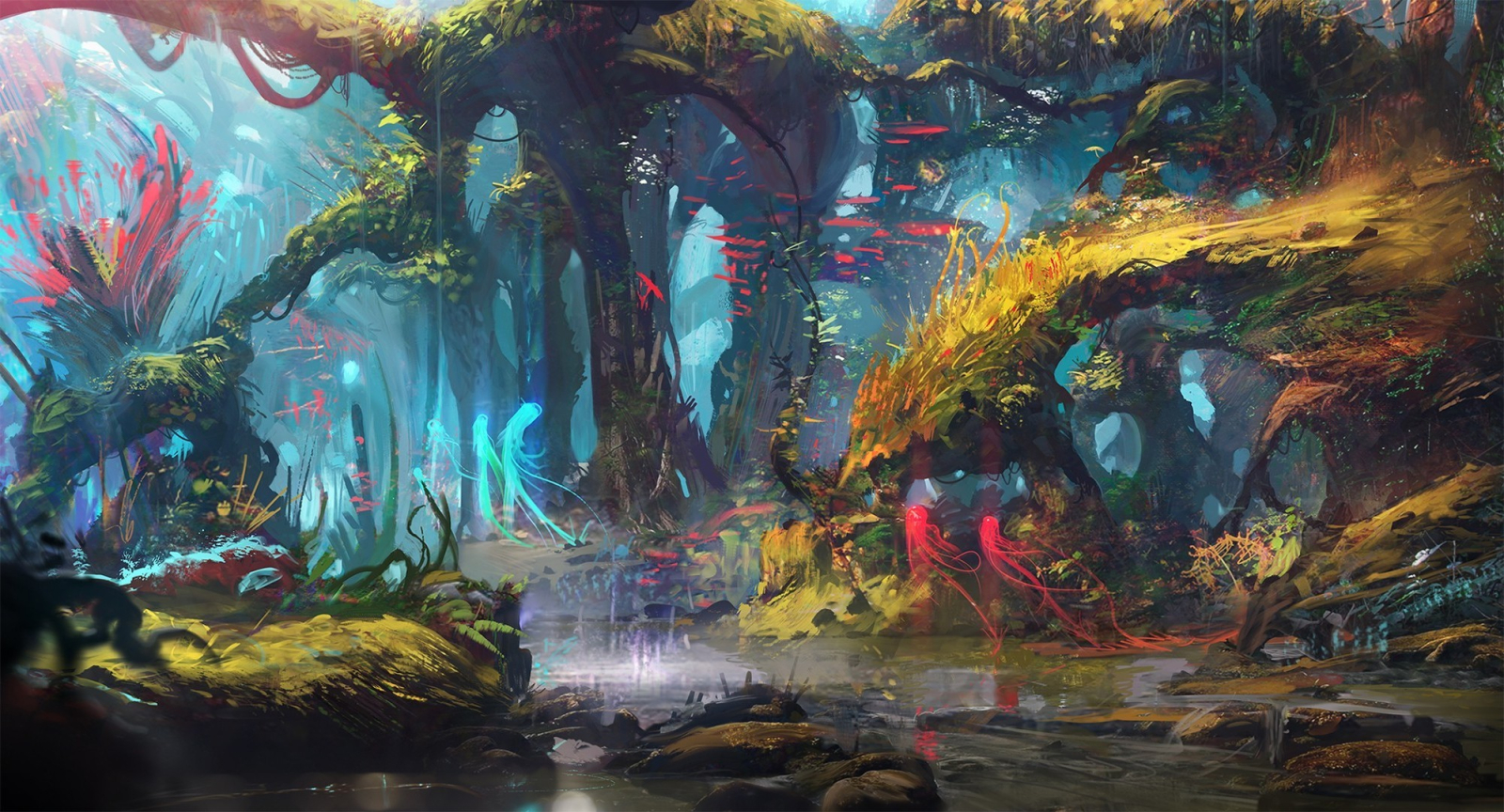 The world of the Fae is the epitome of the nature of life, birth and fertility. Creatures native to this plane do not truly die, instead returning to a cycle of life specific to Faerie in which they are reborn into new forms either naturally or with the help of the Wisp-weaver.
Faerie is a dichotomy of law and chaos. To outsiders, the fey are chaotic in nature, living by the whims of their emotions and random in thought - which many do - while the world of the fae twists and shifts at its own whim, but to those who look closely the realm of Faerie and their inhabitants are bound by intrinsic laws that have been in place since its creation at the beginning.
Faerie has no true ruler or rulers like other planes, but its most powerful residents are the Sidhe, the greatest of which are known as Archfae or Noble Sidhe. These fae lords and ladies pursue their own goals, some rule over the courts of the fae while others keep to themselves, preferring to avoid courtly politics for the wild places of Faerie. But while the realm of Faerie may be without official leadership, there are some who would name the Queens of Faerie as their sole leaders.

Many fae owe their allegiance to a court, or group, of fae. Queen Titania, the Summer Queen, and Queen Mahb, the Winter Queen, rule the greatest of these courts, and most other courts are recognized as merely subdivisions within the courts of Summer and Winter. The Courts of Summer and Winter are the major courts of Faerie, with no true competitors for the ruling organization of the fae and Faerie other than themselves as they rule over the majority of court-bound fey, which happens to be most fey. The rulers of these courts, within their own seasons of the cycle, are on par with many deities in power. Summer and Winter compete with each other constantly, shifting power between them with the passing of the seasonal cycle maintaining a balance that is necessary to the stability of Faerie. Each Spring, Summer's power strengthens until the apex of the summer season at which their begins its power decline through autumn until the apex of winter when the Winter is at its most powerful. Rarely do the courts actively war with each other, for when they do Faerie and all the worlds connected to it feel the repercussions of the conflict.
When a fae is born of other fae within Faerie, they are bound to their parents' Court. Those without a Court can bind themselves to one, most opting for Summer or Winter, or remain outside the ruling stratum of Faerie as a Wyldfae. Half-fey, or changelings are constantly spiritually pulled towards their fae parent's court, but are under no obligation to join. Those changelings that do, forfeit their mortality and become fully fae, bound to their court and the laws that all fae must abide.
Those fae not of Summer or Winter belong to any number of smaller courts that attempt to assert their own rule upon various realms of Faerie against the wills of Summer or Winter - whether aggressively or passively - or belong to the many unbound fae known as Wyldfae. Wyldfae are typically made up of those fae who do not prefer the additional restrictions of the courts or those who have been removed or left a court. While the latter is rare, leaving a court is possible with difficulty and often comes at a great cost as it requires a fae to break their word or the word of their family.

The Summer and Winter Courts are the oldest of the courts and are ruled by the mightiest of the Noble Sidhe, the Queens of Faerie. While each court is headed by their specific queen, the court is in fact led by three queens: The Queen that Was ("Mother"), the Queen that Is ("Queen"), and the Queen that Will Be ("Lady"). Like the seasons that rule the power of their two courts, the Queens also rule in a cycle with the Lady becoming Queen and the Queen becoming Mother while a new Lady is chosen to take the mantle of the youngest queen. These transitions may not occur for hundreds or thousands of years as the fey are immortal, but they are bound by their place in the hierarchy with the Queen being the leader, the Lady the second-in-command, and the Mother the former, rarely seen.

Court of Stars, Seat of Summer

The Court of Stars is the seat of Titania, the Summer Queen and ruler of the Summer Courts. It is a great hall of enormous, bright white trees acting as columns whose branches intertwine to form the high hall's ceiling with glowing flora hanging from all parts of the structure, giving off a warm light.

The stronghold of the Winter Court, ruled by the Queen of Air and Darkness, Mahb, sits upon the slopes of the high mountains in the coldest region of Faerie. It is an enormous shadowy fortress of black ice with a single elegant spire rising from the structure's center. It is both beautiful and terrifying as the winter fae, and is rightly avoided by most travelers.

Melodious Glade of the Coterie of Song

Among the sprawling forests of Faerie lies a clearing ruled by Hyrsam, the Satyr Prince. Here fae of all kinds, many wildefae with no affiliation to a Court, and even some invited mortals, frolic, feast, and make music. Times among the coterie ebb with the strange wildness of their master, Hyrsam, who is known to be generous, gregarious, and kind, but to also leap into bouts of wild abandon. As one of the Lords of the Hunt, much of the coterie abandons the glade to take part in the Wild Hunt, though whether the Glade truly exists in one place or persists while Hyrsam is away is another question entirely.

Hall of the Goblin King

Within the mountains of Faerie lies a hall to the Summer King, the Erlking, King of Goblins. This imposing archfae feasts and drinks with his fae goblinoid warriors in these halls are rarely leaves for any purpose that does not include war or hunts. Few mortals find their way to these halls willingly, and those who do rarely find it welcoming unless they are able to prove their own strength in the face of the King of Summer and his warriors.

Faerie is a plane of constantly varying wilderness with trees as tall as mountains, living bodies of water, and travelling faerie courts. Conditions vary greatly from place to place and what would be considered the laws of nature on the Mortal Plane are no more than local by-laws in Faerie, and even they can be overturned by entities with sufficient willpower - namely archfey, the Noble Sidhe.

The wild array of varying environments are only accentuated by the variety of creatures, both intelligent - as more than most mortals would believe are in Faerie - and bestial. Faerie is the epitome of life, not just of living and being alive, but of life itself including emotion and death. It is all a part of the great cycle that rules Faerie. So there are in this realm great beasts and creatures that hunt and kill, those who frolic and dance, and those who prey on the joy or suffering of others. The plane of Faerie encompasses all manner of being and therefore a variety of creatures to great, strange, or terrifying exist within it.

Faerie follows the traditional seasons, though not at the same time, nor the same place, but it follows the cycle as all things must. Night and day may be determined by an Archfae, but the seasons are concrete and unavoidable. During these times, specifically summer and winter, the strength of certain fae grow or weaken depending on their loyalties to the Summer or Winter Court. Outside the courts, beasts and fae react to the changing of the environment as any do.

Millenia ago the elves and gnomes of the Mortal Plane were of the fae. They lived in Faerie and crossed over to the Mortal Plane for many reasons as they do now. But an event on the Mortal Plane separated Faerie's connection to it and cut the fae off from returning to their home realm. Those fae that learned to survive in this foreign world became attached to it, no longer fae in nature, but mortal. Thus, the first elves and gnomes - and some believe goblins - were made.
Alternative Name(s)
Feywild, First World, Alfheim, Immortal Hunting Grounds, Plane of Life, Spirit World
Type
Dimensional plane
Additional Rulers/Owners
Owning Organization
Noble Sidhe
Characters in Location
Article template
Geographic Location
World
Aonas
Category
Planes in Explore Aonas
Author
DubiousJester
Publication Date
20 Jan, 2020
Creation Date
20 Jan, 2020
Last Update Date
2 Sep, 2022
Visibility
Public
Views
17
Favorites
Comments
0
Work In Progress