In the past, when Junah was young, he had a reoccurring dream. A wolf would chase him into the barn on his parents' estate. Junah would wake with a feeling of fear which would feed the same dream the next night. Eventually, that fear turned into anger. Standing in the door of the barn, Junah turned to the wolf and yelled, "What do you want!" Up to that point, Junah had not recognized that the wolf was a reflection. 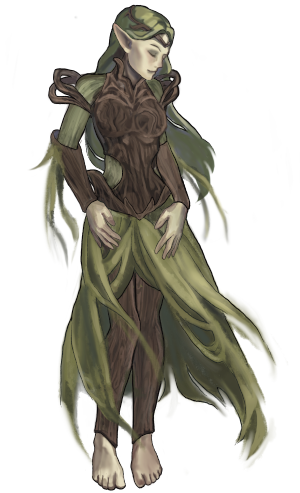 Lavani in armor by Hal Foster
After the wolf, Junah would have dreams about the future. They were rare, but he would start to pick up patterns when he had been in a place long enough. He saw that his parents were sick in a dream. Soon after that, they had sent him away with Gorn. They did not want his life to end with theirs. Gorn had been an extraordinarily loyal and effective bodyguard for the family. He was a calm and peaceful giant until there was a reason not to be.

Gorn looked down at Junah. After years of traveling with the boy, Gorn knew the signs of one of those dreams, and he tried to calm Junah as he tossed and turned in his sleep. Junah yelled "Noooo!" at several points. Gorn recited a mantra he had picked up from a cleric. "Protect his body, guide his mind, find the divine, show the hidden path."

In his dream, Junah was standing in a rectangular pool. It was shallow, barely a foot deep. Trees lined the park around the pool. Buildings stood in the distance. People were crowded around the pool. They were all looking ahead. An enormous shadowy form stepped over the building in front of them. A wave of fear and despair flowed over the people. They all started to run. Junah yelled, "Noooo!" The shadow swung its arm out and through a part of the crowd. "Noooo!" Junah yelled as everyone the creature touched disintegrated.

Junah caught some movement to the left. This was different than the nights before. There was a flash of green. A figure stood by the trees, looking at the shadow hovering over Junah. The figure had long hair, and a mesh of wooden armor covered their body. He felt a sense of calmness, and the figure stepped forward. Just as she came into focus, he woke up.

Would you like to meet Lavani?
Senses
Short Stories of the Anhult
Peace