Half way between the spring cross quarter and the summer equinox, the boats start gathering in numbers that challenge the dock hands to use every inch of pier. Some boats are just anchored in the shallow water around the dock or even pulled onto the beach. This marks the beginning of rally season. The fields have been planted, most of the spring rains have settled to a more manageable rate, and everyone is ready for a break and to have a festival.   The Rally itself is held on the day of the Summer Equinox. The shoreline and pier are filled with people and food stands. The day is spent relaxing on the beaches, watching the fishing on the horizon, or in your boat trying to bring in the best catch of the day. Half of the fish caught are given to the City of Etonia Many fisherman donate a portion of their haul to the church. Locals have stands where they clean and fillet fish throughout the day. Stations for smoking and drying mass quantities fish are set up along the beach. Several sages from the library are always on hand to flash freeze fish for storage and/or transport as well. Etonia has been making a name for itself in the application of magic for practical day to day purposes. Stands with fried biscuits and other treats are scattered throughout the city during the entire rally season.

Why a Fish Rally?

Etonia started as a small fishing town. That tradition continues even as the city has grown, now focused on exporting stone and silver from the mine, hides and leather from the forest, and surplus from the fields when yields are good. In the spring fish migrate close to the shallows along the coast to spawn. After spawning season is done the fishing can commence. In the past, the sudden and important bounty required everyone to spend some time fishing. Now the season attacts people from far down the coast who want to participate in the event. It can double the population of the city and is a boon for many - just don't try to find a room at an inn during the week leading up to the Rally.

With his, her, or their first catch after the spring cross quarter day, a fisherman can enter the Rally. Traveler's only need to catch a fish somewhere within the Bay of Claws. Most catch one on their way to Etonia. It is easy enough to catch one near the shore as well, so anyone that wants to enter can surely claim a spot. The only other thing they need is a boat under 20ft long. Boats can have up to 6 people but the catch from the rally is either split evenly or each catch needs to be documented. Nets are not allowed on the day of the Rally, only fishing rods.   Early on the morning of the Summer Equinox the fleet of boats sets off to catch as many fish as they can. The fisherman with the largest catch, the smallest catch, the largest total quantity, and the largest total weight are awarded prizes from the master of ceremonies. For a catch to count the fisherman must bring their haul to the dock master to be weighed and counted on the Summer Equinox. A fisherman can request that they keep half their haul but half is taken for use by the city of Etonia. This is a primary food source over the summer until the new harvest from the fields starts. All boats must be moored by 4pm for their catch to be counted in the rally.

This lucky fisherman is selected by lottery. The lottery entry is made when a fisherman registers their first catch. The Master of Ceremonies is selected a week before the Rally. Throughout the week they host gatherings at each of the taverns. Their individual tab is paid by the tavern. The schedule of gatherings is posted around the city and heralded by town-criers.   On the day of the rally, a short ceremony is held at the end of the dock. After a short speech, traditionally 10 minutes or less, a ribbon is cut and fisherman jump into their boats. They race to their preferred fishing locations. The master of ceremonies does not get to participate in the rally but continues to MC as fisherman return later in the day. 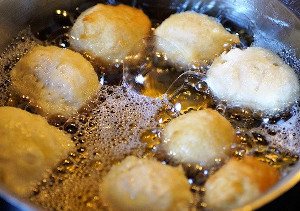 Fried Donuts by Image by ivabalk from Pixabay
About 3 weeks before the Summer Solistice, biscuit stands start appearing around the city. They are all up and operating a week before the Rally. The stands usually consist of an umbrella with a large pot of cooking oil. A fire or magical source of heat is used to boil the oil. Dough using up left over winter wheat is fryed to make a tasty treat for passers by. The wheat and dough is not a high quality as it is the last of the stores so the deep frying makes it more palatable. With the increase in foreign participants stands started using spices like sugar, salt, and herbs to flavor the biscuits. Some stands have gotten quite elaborate over the years. Locals have their favorite stands and wear patches and colors to promote their stand.

The fish smoking stations continue to process fish for a month after the Rally until the fish start to migrate again. Then they are packed up until the following year. Fishing continues through most of the year but the increased capacity of the Rally is not needed. Biscuit stands slowly disappear until only a few remain and most of those are found in the public market. 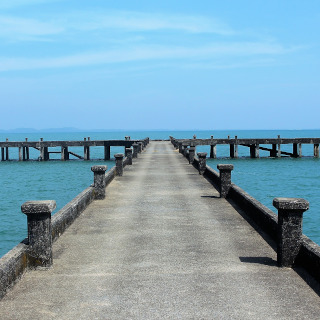 Pier by hele1409 from Pixabay

The pier extends a half a mile out from the beach and warehouse district. It is entirely composed of stone. Prior wooden piers would not last through several cycles of the wet season. It ends in a "T" shape that extends another half mile in each direction. Larger ships can moor on the T without issue. During the Rally each stone piling would have 3 or 4 boats tied to it. The pier continues to be busy throughout the summer and fall. During the winter local fisherman try to continue to fish until the spring solstice, weather permitting. 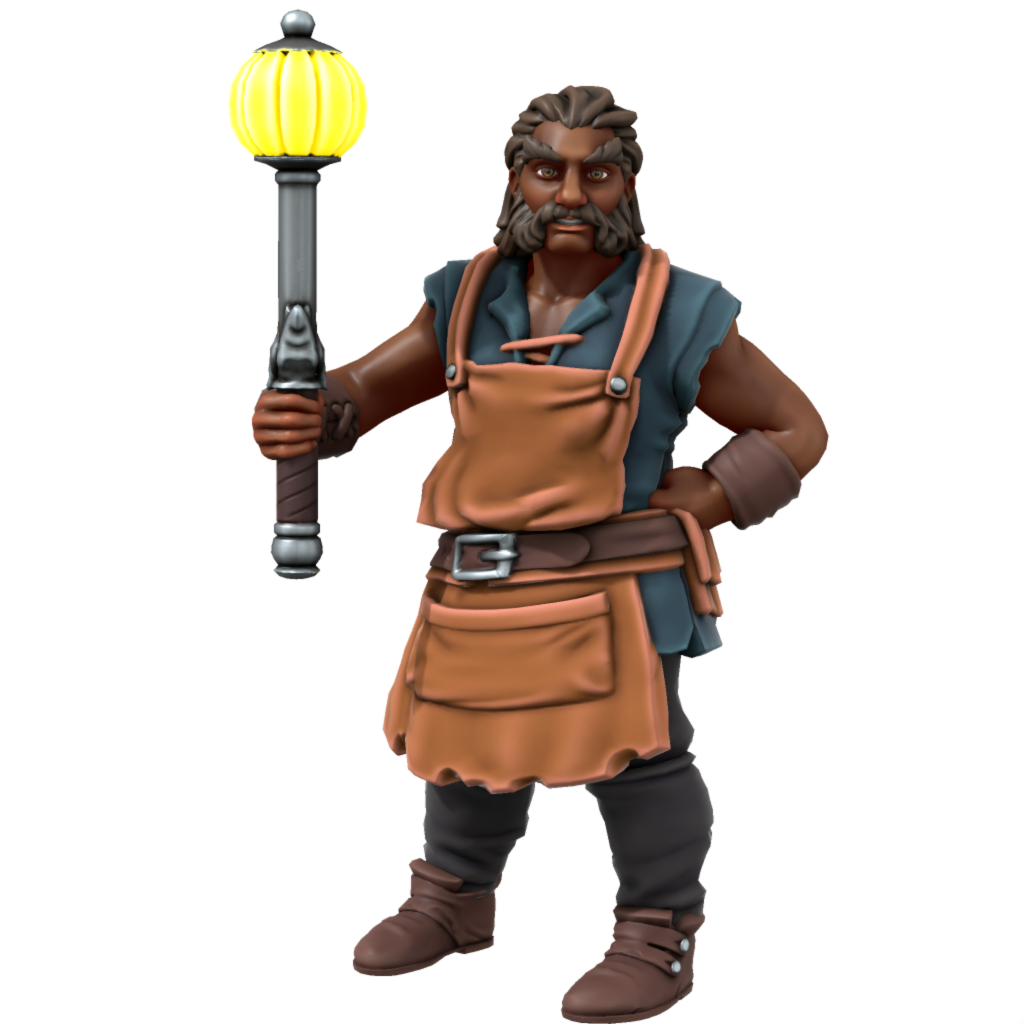 This jolly man from Coral Gate has been coming to the Rally for 9 years, nearly the entire history of the festival. He is a well known chef that has worked for several nobles around Coral Gate. He usually sets up a biscuit stand and occasionally would do some fishing during the rally. He registered every year but was only the Master of Ceremony last year. During his term, he held an outdoor meetup highlighting the street vendors in addition to the tavern tour. He completed a book of biscuit recipes and it quickly became a best seller. Not all biscuits stands would part with their receipe but he made up several of his own to generously fill the pages.

He is holding the sceptor of the Master of the Ceremony. The bulb at the top lights up with a magical command word. It is lit at the beginning of the day of the rally and when it is turned off it signals the end of the rally when all boats must be moored.

Phineas Smucker
Community Challenges
Garium's Sword
In response to the prompt Create a festival celebrated by one (or more) culture(s) in your world, to kick off a new campaign or story.

Great work! I can really appreciate the level of detail that went into this article. Are you planning on using it for your D&D campaign?

Yeah. The main party was taking out parties of goblin raiders, eventually they found that an amulet was used to allow the raiders to know other humans were allies and convinced one goblin party to not attack but wait for further instructions. It was the same size as our group of players so I had the idea to do a one shot as those goblins. It turned into two sessions interspersed among big story arcs. This will be the third session, the goblins escaped the grip of their tribe/programming and want to be pirates. We left off the last session where they were in the farmlands around Etonia...

Awesome! That sounds like a blast. I really like the idea of using one-shots to offer a different perspective. I've used it, myself, before to let the players explore the history of my world. It's a great way to shake things up, too.

This sounds like both a fun and practical festival. I like that half of each haul is used to help feed the city. The way the biscuits have changed over time is really interesting. :D

Thanks! Right, it formed out of a necessary part of the original fishing towns survival tactic so still has a bit of the practical purpose. I like the idea of abundance in governing vs scarcity and thinking about how that might happen. Thanks for reading!

I like your article. Very nice simple design. I assume that it is just the default theme with just a few tweaks

Thanks! Yeah, a few css customizations and that's it. The active area in the world is remote, simple, open spaces so I have that in mind with the format too.

Lavani started a trend with Fashion from a Fey during the Costume Challenge.   Keep up to date with my article tracker in my Summer Camp 2021 Pledge article.
Powered by World Anvil