Church of the Silver Dragon

G
wen and Teemo emptied their buckets and rinsed the drain one final time. They summoned the rags into the buckets and washed their hands. The bathhouse mostly cleans itself but the tough grime still required some elbow grease from the acolytes.

They performed their duties twice a day. Once after the morning rush and again in the evening as the steady line of people faded for the day. Teemo was always on time and dove into the work. Gwen usually took a little while to get started.

The good-natured Teemo gently teased her into the routine. They had a good rhythm. Just as Teemo tired from scrubbing the corners, Gwen swooped in to direct the rags and use a few spells to get things done faster. She had a much better connection to magic and would launch into casting tips and guidelines with Teemo as they left. 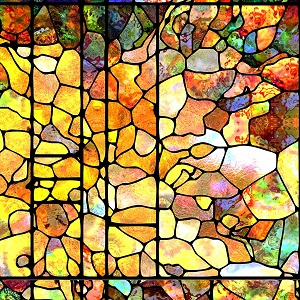 Stained Glass by iStockphoto.com\agsandrew
F
rom the bathhouse they entered the cavernous main hall. Seven pillars and a 2 story stained glass window were the features of the main hall. The pillars were aligned in two rows of three with the seventh pilar actually a part of the door directly opposite of the stained glass window.

A warm yellow light passed through the window, even at this late hour. The light was eternal and said to be a blessing. It was a humbling space. The acolytes turned to the window and bowed. As they had been taught, to give thanks to the Existence, for the powerful being that watched over them.

They were to stand up against injustice and help those in need. The expectation was to be non-violent but the head priest himself had been involved in one of the great wars to the South and an order of knights was stationed at the church for protection.

T
he acolytes crossed the hall and headed into the soup kitchen. The line for the public had dwindled so they could get their evening meal now. Refugees from the forest and other regions to the South have been a consistent occurrence for several years. The native inhabitants of the forest talk of something hunting them and missing family members. The city of Etonia has new walls, well-trained guards, and with the church - a place to get clean, eat, and heal.

Teemo's family had come to the city about a year ago. They had lost an uncle when they decided to make their way to Etonia. He is often the storyteller at dinner. The other acolytes listen intently to his stories of the forest and history of The People, as he refers to them.

...Ten days later a great wyrm appeared, calling for Damik to submit.
It was there to extract payment for every transgression
Damik refused and went down raging with the entire nation.

Damik put every soldier and every citizen out to fight
Every city and every battle were lost in a few nights
Those calling for peace and those in the forest were spared
Many stayed in the woods, lived off the land, while the forest repaired...

B
efore he could finish this evening a bell tolled. The acolytes stiffened and waited. It tolled two more times. Gwen, Teemo, and a third acolyte stood. Teemo grabbed one more piece of bread. They hurried out of the dining area back across the main hall, diagonal to the hospital wing of the church. The bell signaled three injured people were arriving. This was the second incident this week.

As the acolyte's entered the main room where the injured were staged, they saw three city guards being helped onto beds. One had deep wounds and was unconscious. Gwen rushed to his side and began an incantation to help stabilize him. Teemo and the other acolyte each helped one of the other guards. Teemo moved to aid the guard on the right. He was also one of the native inhabitants of the forest. The guard was grateful and put his hand on Teemo's shoulder, "Numbor, my grandmother will be pleased that I was returned to her in one piece."

One of the knights entered the room, "I am Lazarus. Can one of you share the details about what happened?"

"I'm Lieutenant Stark, we are with the Expeditionary Forces." The guard opposite to Teemo had answered, "Mirasoon was attacked by goblins and gnolls. We broke through their lines 4 days ago to get word to Etonia. We need to alert the council!"

Background on The People

The People refers to the indigenious population of the Anhult Woodlands. Their numbers have dwindled and most reside in Etonia now.

The names, Numbor and Numsad, refer to young members of a family who have not obtained their prestige but were on the path to that acheivement.

Prestige is generally equivalent to adulthood but requiring mastery of a skill, birth of a child, or success on a long hunt with the emphasis on the journey.

L
azarus replied "Consider them alerted. I will be back to check on you. Teemo, please alert High Priest Edwards." Lazarus left to talk with the council. Teemo shook the hand of the guard he had helped and hurried across the main hall again to the living quarters to find High Priest Edwards.

The living quarters had rugs on the floors. There were shelves and books everywhere. The rooms were filled with personal items. There were study rooms, bedrooms where two or three acolytes shared a space, and two large common rooms.

Teemo found High Priest Edwards in his personal study. "Cat, get off my writing table!" The high priest was taking his ire out on a black and white cat that slowly move off the priest's parchment and quill and hopped onto the floor. The cat sauntered past Teemo and rubbed his leg. Teemo smiled sensing the playful creature was quite enjoying irritating the high priest. "Sir, I have a report on the injured..."

Answering: "a building associated with healing the sick"
Visit George Sanders's Competition Page Check all other answers to this prompt Competition Homepage

I like how you explain about this building through a story. It's captivating and easily kept my attention on what I was reading.

Thanks for the comment! Yay! This prompt really spoke to me. I like this way of answering prompts. I have to catch up on the other prompts - was away for a small beach vacation. Sorry for my delay in responding!

Lutra lived in the Unilynn until its end, then her son Ardelis brought her to Etonia. She knows the story behind their home, The One River.
Powered by World Anvil