His Grace Richard Harold of Darkwater (a.k.a. The Kind-Hearted)

As long as I can remember, Richard was a wise, kind and benevolent ruler. A noble man, ruled by honour and chivalry.
— Garreth von Drachenfels

Richard of Darkwater is the righteous good ruler of the province of Dornwald. He is a knight who has proven his heroism for years in the war against the Empire of Nynarios. Lately there's been a rumour that the Duke is dying. The people of the province fear that he will not have long to live, especially since he has given almost all powers to Cyric Silverhand, the mage.

Its full title, proclaimed on official occasions, is:
His Grace, Richard of Darkwater, Duke of Dornwald, Knight of the Crown, Protector of the Realm.

His people, however, call him either Sir Richard or His Grace, Richard the Good-hearted. 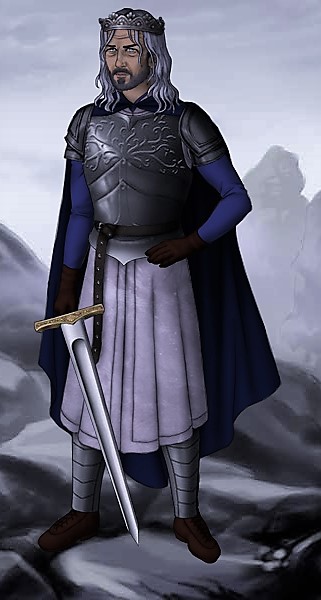 Richard of Darkwater by Susanne Lamprecht

Richard rarely appears in public in formal dress. Instead, he wears the knight's armour he wore during the war. At his side hangs " Wolvestooth ", his faithful long sword.

If the Duke is forced to do so without his armour, he wears formal clothes in dark blue and silver, the colours of the duchy. The coat of arms of Darkwater, azure a unicorn rampant argent, is on his shield as well as on his garments.

Richard of Darkwater was born in 1249 AoH, son of knight Raphael of Malin and his wife Sapphira on a manor near Denby. As the only child of his parents, great importance was attached to his upbringing, as one day his father's fiefdom would fall to him. However, this has not yet happened, as his parents are already in their eighties, but both are still alive.

Richard's childhood was marked by the aristocratic lifestyle of the Aurian nobles. He was brought up like any other nobleman in the land, which ultimately means that his own good always comes second to that of the kingdom. Life as a nobleman has also ensured that Richard led a rather lonely life. Of course, playing with the servants was not in the Lord's son's interest and there were no other nobles of his age on the estate. The first real friend was the son of his knight, Garreth. The boy of the same age first became Richard's brother in arms and is now his captain of the guard.

During his time as squires, Garreth and Richard fought an Ettin, where they found a treasure map. The two men thought long and hard before they decided to look for the treasure only when they had made a name for themselves. A wish that was to come true faster than the two of them had dreamed. Less than half a year later they were on the first battlefield - and survived. In the following years, the two actually made a name for themselves. Even though it was Richard who was honoured with the title of Duke, Garreth remained with him. At the Duke's wedding it was his best friend who stood at his side and it was he who set out with him to search for the mysterious treasure.

When the two returned, Richard built Keep Aliestra on the hills and established his permanent residence there - and not in Dornwald, as so many had expected.

For many years Richard ruled wisely and justly, he even took in Lady Gwennyth, a half-elfish noblewoman, as a ward into his household and when his son fell in love with her, he promised him her hand.

One and a half years ago, the goddess Riana appeared to him in his dream and warned him that everything he had built was threatened. She did not give him exact details - but the goddess' warning was fulfilled the moment his beloved son disappeared without a trace a year ago.

Not long after that, the mysterious illness began, which has kept the Duke under its spell ever since and of which nobody knows exactly what it is about.

When Richard was seven years old, he entered, as usual for a nobleman's son, the service of another noble family as a page. At fourteen he began his career as squire of knight Gabriel von Drachenfels.

In the service of his knight Richard also went to war against the empire of Nynarios and was knighted afterwards for his merits in the war. His career as a knight is marked by campaigns, wars and, in the rare times of peace, direct service to his queen. When Darkwater's fiefdom was entrusted to him, Richard retired from active military service and devoted himself to the administration of his fiefdom, even though he remained ready when the Queen called to arms.

Lovely article and nice use of the RPG system. Lovely artwork as well !. A good read, Keep up the good work!

Thank you very much, I'm happy you like it!