Translated to “core toss,” kor’ittes is one of the oldest games ever invented on Serpentis. It is a simple game. One individual throws a burst of energy and the other player(s) must catch the burst and either send the same burst back or throw a new burst. It is akin to playing catch or frisbee.

The game’s playability is limited by one’s core energy. Dark core types can’t manipulate light energy and vice versa. Certain energy types might not interact well with others outside of their type or subtype. Despite these limitations, the game thrives in Serpentian culture thanks to the neutral cores of pateru, dual-chamber cores of kartuu, and chakras of shyr. They are able to fling back any type of energy within their orientation or even outside of it if a player happens to be pateru or a kartuu bonded to an individual with an opposing core orientation. Pateru can fling back any energy type without worry of the energy’s orientation. The game can be dangerous if one does not mind the energy being used.   One can also play kor’ittes solo.

The game’s conception is suggested to have come from kartuu throwing energy at each other to pass the time between hunts or pups learning to use their core energy. Kartuu have particularly thick hides which can resist a battering of small energy orbs. When kartuu got pateru and shyr in on their games, kor’ittes settled firmly into Serpentian culture.   Kor’ittes is widely played by family members, youth, even members of the Demon Guard, and anyone else looking to pass the time. Not only is it fun, it’s an excellent way to strengthen one’s core as one would exercise a muscle. Kor’ittes is a classic introduction and exercise for children and anyone else learning to use their core, notably in training programs and classes.

Kor’ittes has also been made into a sport of similar likeness to tennis, volley ball, or badminton. Either two teams or two individuals are pit against one another in a court and the team/player with the most points at the end wins. Teams/players win or lose points based on if they make a successful pass, drop the burst, fail to catch it, throw it out of bounds, etc.   An iconic Serpentian style of choreography and an entire genre of performance art was inspired by kor’ittes. It has been a long standing addition to the culture of Serpentis where dancers lavish their routines with flourishes of energy passed to a fro. Some shows are quite acrobatic. In order to achieve a certain appearance in their energy, performers spend a great deal of time practicing. Competitions have been born of this effort to reach perfection and achieve the most elaborate and beautiful performance.   Plenty of street performers, be it groups or individuals, entertain the common people in the cities, especially Oringul. These performances can be quite spectacular when displayed during the dark of winter.   Kor’ittes has also been brought to Asira as a hugely popular multi-racial performance hosted during the Cindic Games. 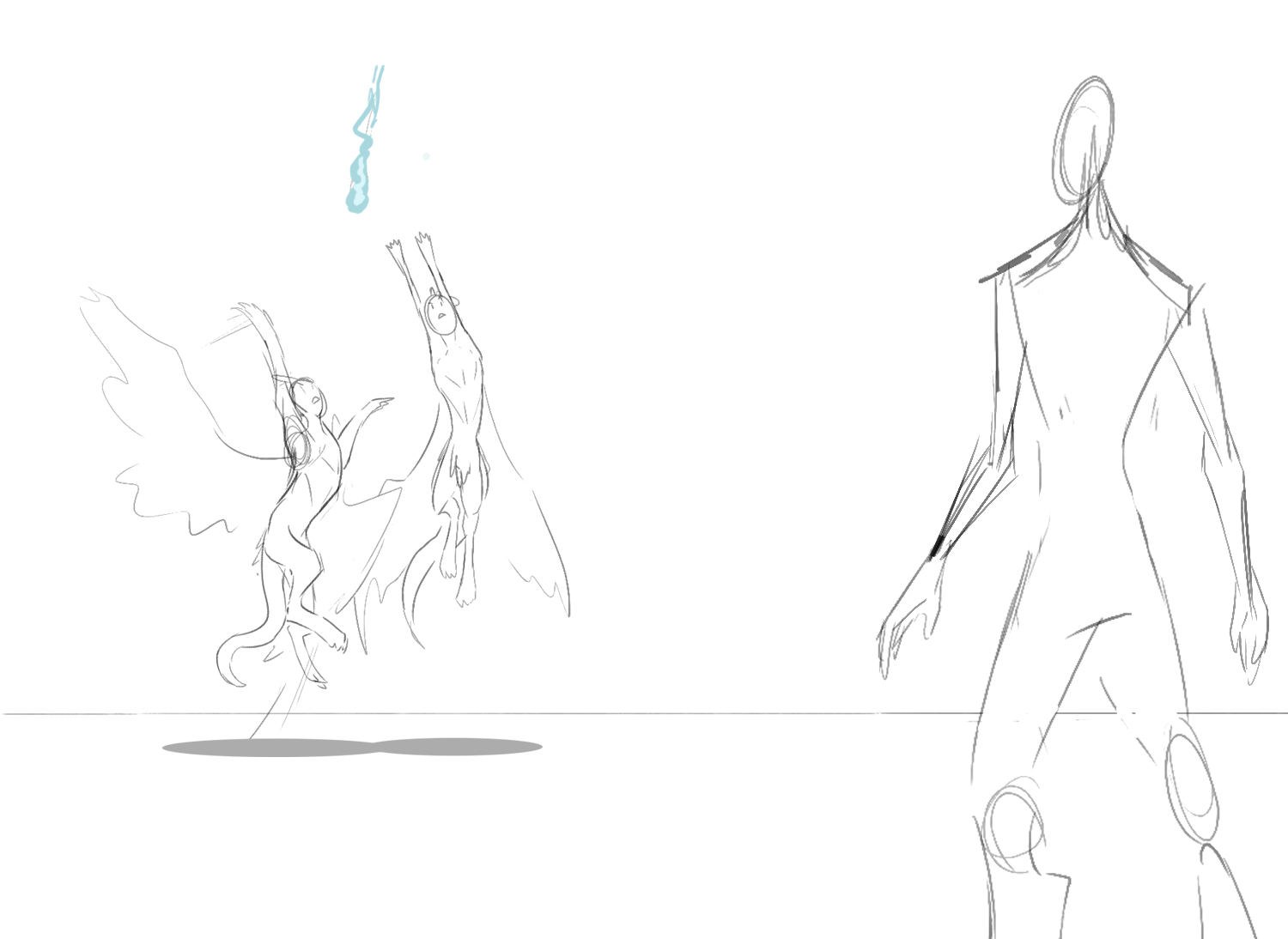 A pateru playing kor'ittes with two kartuu
How to Play:
1. Someone throw a bit of energy.
2. Someone catch and throw back the energy.
3. Repeat step 2.