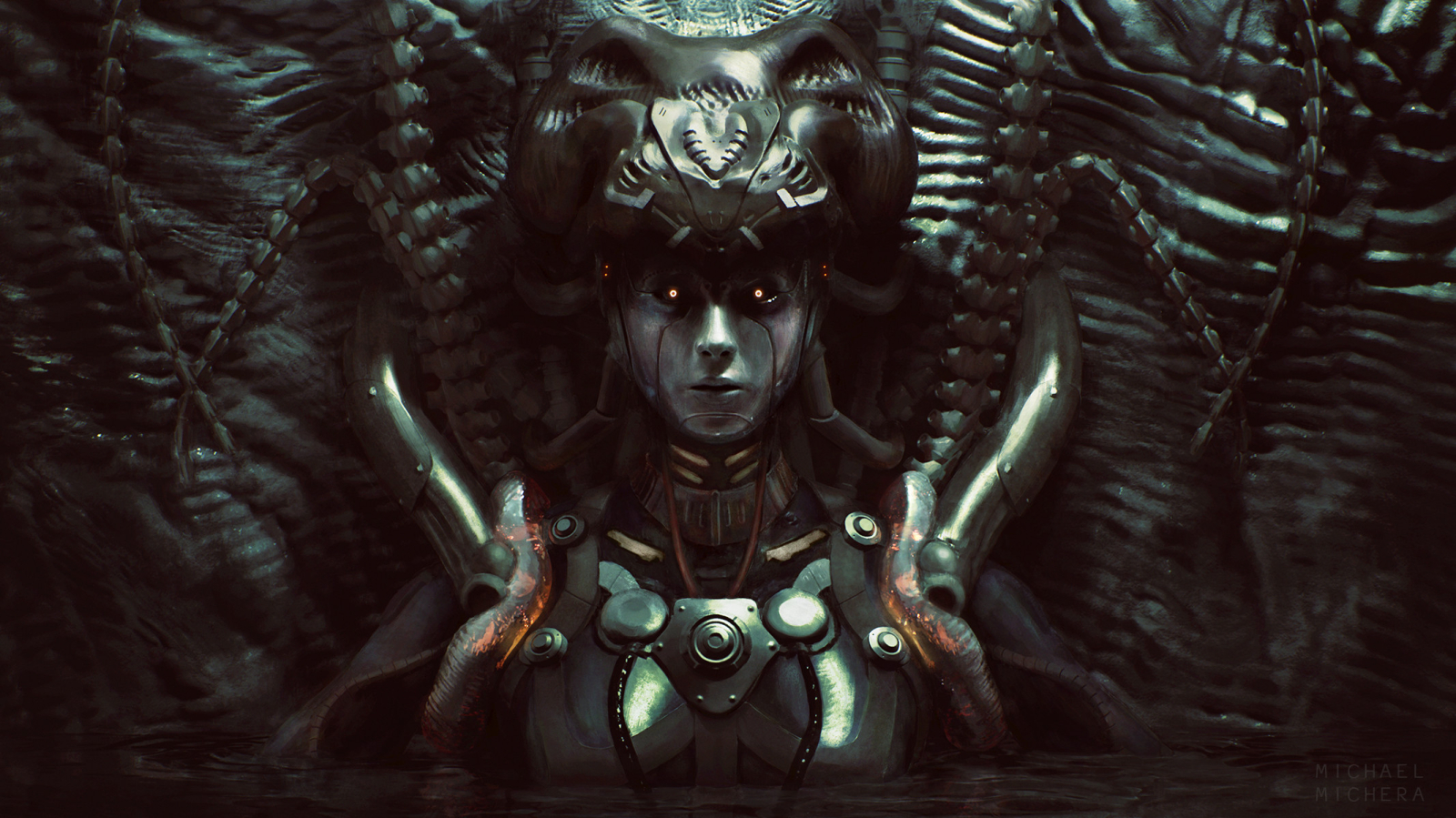 The Eternal Sovereign; the Archbetrayer reincarnated after 12,000 years of machinations to usher in the Age of Apocalypse

-- AGE OF APOCALYPSE CONTENT --
This article describes Amanor in the Age of Apocalypse.
Pre-apocalypse article: Loviatar

Mortals and immortals. Souls and the soulless. Lands, waters, and skies. Look upon the shape of things to come. Hail your eternal sovereign!
— First words spoken by Louhi upon her reincarnation in 2501 ER

Louhi is the Eternal Sovereign, the most powerful and most terrible divine entity in existence. Her reincarnation in 2501 ER ended the Blessed Age on Amanor and began the Age of Apocalypse for the entire Universe. Louhi's superiority is undeniable, her rule unquestionable and her will unopposable; her divine might reaches everywhere, and no creature is spared from the horrors of her dark reign.   Louhi is both god and ruler. She commands endless legions and countless worlds in an unstoppable conquest of the universe. She lords over other divine beings, slaying those she pleases and making slaves, prisoners, or servants of the rest. Louhi has shattered the might of the Empyreal Gods, subjugated the Outer Gods, and crushed the dynasties of Alfheim and Nidavellir.
Contents
Music

In the Age of Apocalypse, Louhi is known to all peoples of the universe. As the Eternal Sovereign she either slays or subjugates all gods, eternals, and mortals alike, demanding the worship of all.   See also: Louhi's Law

Across the universe, Louhi is known to an immense variety of peoples and cultures through various different incarnations. Countless religions worship her but knowledge about her varies greatly. On some worlds the Eternal Sovereign might have appeared directly, but on other worlds only her heralds and minions have been seen. Much is then left to religious interpretation.   The One Sovereign. Louhi is depicted as a human figure clad in simple but powerful regalia just like the empyreal gods were in the times before the Age of Apocalypse. These depictions forego any unnatural characteristics and the Eternal Sovereign appears as a beautiful woman, most often with black hair, clothed in such beautiful robes and exquisite jewels as befits her station as the single supreme god of all creation. The One Sovereign is a very human and easily relatable depiction of Louhi.   Golem Goddess. Louhi is depicted as a silvery, metallic, humanoid figure. Her form is most often naked but exact depictions vary. The Golem Goddess bears significant resemblance to the real-life avatar of Louhi. Some variations of this depiction potray only Louhi's face and she is incidentally known also as She of the Silver Visage.   Goddess of Many Faces. Louhi is depicted in a myriad of different figures. This interpretation of her nature arises from the knowledge that Louhi is the Devourer of Souls and Eater of Empyreals; within her all become one, and she expresses the aspects of devoured souls through herself. Of course, the depiction of the Goddess of Many Faces interprets this very literally, as Louhi is depicted as a shapeshifter that freely takes on a variety of different physical forms -- most of them natural and relatable, but others still alien and strange.   Formless, Shapeless, Faceless. Louhi is depicted as an entity that transcends physical existence. Many cultures view her as such a powerful god that she has no incarnations, and physical existence is too lowly for her to manifest avatars. Such views often define Louhi as a boundless omniscient force that encompasses the entire universe.

Louhi commands a greater array of mystical powers and divine domains than any other god. She is a master of magic, the greatest necromancer in existence and currently in possession of the mythical Arcanomicon. She is also the oldest god of knowledge and the only one versed in the domain of secrets. Moreover, Louhi is the only creature in known existence capable of devouring the souls of other creatures, and with this ability she has assimilated the powers and domains of other gods into herself.   Magic. Magic has always been among Louhi's strongest domains. Before the creation of Amanor she was the greatest spellcaster of her kind and was chosen by Arath-Sodan to be the first wielder of the Arcanomicon. So profound is her mastery of the arcane that she has created two entire forms of magic: blood magic and necromancy. To make matters worse, Louhi was able to claim the Arcanomicon for herself immediately after her reincarnation; with it the Eternal Sovereign has access to practically endless amounts of magical energy, casting spells of such unprecedented proportions that other gods are entirely unable to match. Vaane the Goddess of Magic herself surrendered to Louhi without incident in the battle known as the Fall of Ulthgard.   Might. Louhi is a deadly adversary for any god even when she doesn't rely on magic. She has fought with both spell and blade for uncountable aeons since long before the beginning of time. During the beginning of the Age of Apocalypse Louhi defeated Galatea -- perhaps the greatest warrior god of the universe -- in single combat.   Knowledge. Knowledge is one of Louhi's strongest domains. She is the keeper of the most profound secrets of the universe, privy to such dark knowledge that not even Kal-Sebek has gleaned. While Kal-Sebek focuses on objective knowledge of the universe -- its worlds, creatures, laws and histories -- Louhi specializes in the darkest secrets of the mind and soul. She has spent thousands of years manipulating mortals and immortals alike, dissecting their wants, weaknesses and strengths through manipulation, empowerment and observation. It is said that Louhi knows the psychological workings of every creature in existence and that not even the mightiest god could hope to deceive or persuade her.   Eater of Souls. Undoubtedly the most terrifying power of the Eternal Sovereign is her unique ability to absorb the souls of mortals and deities alike. Through this unholy gift she has increased her powers many times over; by slaying her Disciples and absorbing their souls Louhi not only regained the once-lost fragments of her own soul, but also the accumulated powers and experiences of some of the most powerful evil gods in the universe -- and their domains are now hers to command. Any god she has slain thereafter has increased her might even more and she has become a never-before-seen amalgamation of divine aspects.   Eldritch Powers. Louhi is marked by the alien corruption of the Old Gods, having made pacts with them and having spent timeless eternities trapped in the Far Realm. Her knowledge of the occult is vast, and this grants her such alien powers that have not been seen before in the universe. Indeed, it is the Old Gods that have granted Louhi her powers over life, death and souls. Although she failed to devour the soul of her disciple Maverdevia and thus absorb her vast occult knowledge, Louhi still commands greater eldritch might than other divine entities of the universe.   Indestructible. There are no records of Louhi having suffered any lingering injury or harm following her reincarnation. Her avatar is able to shapeshift into any form, reconstructing and reforming itself in the blink of an eye. When damaged, Louhi's body instantly reverts back to its undamaged state. Likewise, Louhi uses her shapeshifting to avoid damage alltogether, reshaping her body away from harm.

The Eternal Sovereign appears as golem-like humanoid figure covered by interlocking plates wrought from a silvery metal. Strange and intricate mechanisms can be seen on her naked form and transparent tubes on her skin flow with magical elixirs. Louhi's eyes are beads of pure white light in deep black sockets and her face betrays no emotion.   Louhi also appears mounted on a colossal machine known as the Icon of Dominance. It is a towering construct that stands on four bestially jointed legs, covered by massive metal plates. The legs connect at a huge bulbous "heart" -- a pulsating collection of flesh, metal and bone fused together by magics and machinery. Grotesque trophies, mysterious totems, strange mechanisms and spikes of metal jut out from the heart's surface, while spontaneous eruptions of arcane energy cause arcs of light to dance around it. The goddess can be seen attached by her back to the side of the heart, looming high above the landscape to view her terror-struck subjects. The Icon of Dominance is capable of transforming in size and shape just like Louhi herself.
DIVINE INFORMATION
Occupation
Eternal Sovereign
Affiliation
None.
Titles
One Sovereign
God of Gods
Queen of Creation
Scourge of the Planes
Cosmic Tyrant
Dark Overlord
The Matriarch
Eater of Souls
Astral Devourer
She Who Hungers
Godkiller
Starbreaker
Sunkiller
Moonslayer
Bringer of Calamities
Shaper of Plagues
Breaker of Pantheons
Bane of Ulthgard
Waker of Spite
Hatebreeder
Undying Goddess
The Unstoppable
The Inevitable
Caller of Furies
Hateful Murderess
Darkness Incarnate
Slayer of Immortals
Eater of Empyreals
Goddess of Many Faces
She of the Silver Visage
Golem Goddess
Lady of Unholy Countenance
Goddess of Evil
Goddess of Secrets
Keeper of Secrets
Traitor Goddess
Archbetrayer
Crone
Hag of the North
Desecrator of Sacreds
Devastator of Worlds
Dominator of Minds
Subjugator of Peoples
Crucifier of Gods
Bringer of Death
Giver of Life
Great Redeemer
Immortal Beloved
Heartless Mistress
Weaver of Plots
Eternal Machinator
Icon of Eternity
Tamer of Infinity
Heir of Aeons
Claimer of Destinies
The End of All Things
Aliases
Loviatar (previous)
Lowitar (archaic)
Lowi (archaic)
Domains
Louhi can grant to her followers divine powers related to any imaginable domain.
Religions
Louhi's law
Race
Primordial
Gender
Female
Status
Alive
Origin
Predates the Universe
Age
Immeasurable
Relatives
Numerous   ASSETS
Minions
Furies
Equipment
Arcanomicon
Chalice of Life
Aether
Tesseract
Animus

I, immortal
Yet in my mind
I've found a sign
That I may take what's mine
I am the end
The chosen one
And I will lay waste to all
— I, Immortal - Suite Clarity

Previously Louhi was one of the Twelve Sovereigns. She was known as Loviatar, the Goddess of Evil. Throughout the history of the universe, she instigated calamitous conflicts and sowed the seeds of war across the Universe in never-ending efforst to undermine the Empyreals. Most notable of her machinations are the godly wars of Fimbulwinter and Ragnarok, both of which wrought untold havoc on Amanor and cost the lives of numerous gods, but ultimately ended in Loviatar's defeat. However, having gained the gift of undeath, she was able to endure. By endless plots and arduous endeavors she resurrected herself on the north pole of Amanor in 2501.