The head of Casa Serpiente.

Hefty yet compact. Chiseled yet round. Brutal yet delicate. An imposing character who is not incredibly intrusive or at once noticeable but certainly stakes his claim wherever he is.

Often gives a quick raise of the eyebrows when asking questions, presumably to tempt the answerer into responding before they are ready. Bares his teeth when he laughs, if something particularly rouses his humor he will throw his head back in a guffaw.

Publicly unknown. Rumors abound of his ability to walk through walls, turn invisible, speak with others voices, change shape, communicate with cats, rats and birds, and hypnotize the weak willed. He does not seem to contest these rumors.

Born at home and concealed from the world until he reached university age. Was noted by many teachers as having a curiosity and capacity for knowledge that exceeded his seniors, though often referred to, politely, as a "habitual crammer." Noted troublemaker during his university days (mainly by consequence of his hedonistic and humorist tendencies) though rarely if ever being caught in the act. Post university life mainly involved an easy political climb aided by his capacity to engage with nobles and paupers alike, as well as the relative harmlessness of consorting with Senor Serpiente's "spare". After the premature death of his brother, Veneroso succeeded his father with little to no open resistance. Noted as exceedingly personable, unpretentious, agreeable, and "not quite like anything his family has ever produced."

University educated in the liberal arts and humanities. Expert in his family trade of spycraft. General interest in education seems to have extended well beyond his formal graduation.

Graduated university with honors. Head of house Serpiente. Respected patron of the arts. Generally believed to be responsible for, or at least have a hand in, most accidents, assassinations, and acts of espionage within the kingdom.

Generally seen as a poorly kept joke, which is quite the blunder for the Serpiente. His districts are notoriously unkempt and rowdy. He himself seems to spit in the face of how a noble, particularly a head of household, should act and hold themselves. Most nobles, including many in his own house, believe he will not make it past his second decade as head of the Serpiente.

Outlived his father, mother, and older brother by the time he was 30. Does not seem to notice or put much thought into this fact. However, it is noted that their graves were placed on one of the few hills of the Serpiente estate where the sun always shines, and maintain a meticulous level of care and attention.

Does not share his countryman's distaste for theatre and will regularly challenge others when they share less than enlightened views on the subject.

Impeccably tidy in his dress. Bathes regularly. Noted as a fan of scents and regularly wears perfume.

Cordial working relationship with the other house heads and lesser nobles. Genuinely respected by most thieves and assassins in the kingdom. Excellent working relationship with sex workers, beggars, tramps, troubadours, and other "lesser" folk. Veneroso regularly keeps court with Senor Saber Sabiduria, and acts as a friend and confidant, not unlike an uncle-like figure. They regularly attend theater shows together.

Church of the Conqueror

Enthralling, easygoing, extroverted, humorous, jolly, occasionally frightening, and exceptionally well mannered. Even his enemies can't help but admit that there is a part of them that wants to like him.

Avid reader, gourmand, and theatergoer. Rats, cats, pigeons, and other street animals are believed to be "employed" by him.

Deep seductive voice accented with a regular lilt. Rarely curses or uses profanity. An actors annunciation and command. A scholars lack of contractions. Speaks with his hands.

The head of a noble house, with all the responsibilities and privileges that offers. Beyond standard fare he is in possession of a kingdom's worth of secrets, schemes, and scandal which he sparingly utilizes when more conventional leverages are coming up short. 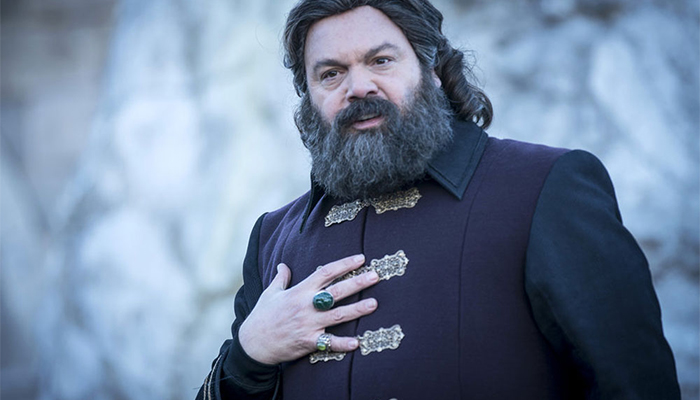