(Quick note: Bai is her family name, Xue is her given name. I'm sticking with the East Asian tradition of giving your family name before your given name. "Daibiao" is her title; it means delegate or representative, and again, in China it's said after your name, not before.)

Xue is slight and nimble, with dextrous hands and quiet footsteps. She is built for stealth, not strength. If you get her pinned down, it's unlikely she'll be able to escape. On the other hand, if she is sneaking around and planning an ambush, you'd better sleep with one eye open.

/*Xue, influenced by her parentage, is a Frostbound. Her abilities are specifically tied to the aspect of Snow; the magic of illusions, mirages, and misdirection. */

In daily life, she dresses elegantly, usually in darker shades (she's aware of her role as the ambassador's daughter and what is expected of her). She often carries a walking stick and occasionally wears a top hat. Her most-worn and most prized item of clothing is her coat. Said coat has four visible pockets and many other hidden ones; perfect for carrying lockpicks and coins for quick sleight of hand tricks...and also for stowing the items that she's lifted from unsuspecting people (only the people she needs to steal from though, usually to retrieve evidence or leverage for her father; she doesn't steal money).

Her walking stick contains a thin-bladed foil, which she uses in cases of last resort. Fighting openly isn't her style.

Xue is the daughter of Bai Shi, the Xi ambassador to Northern Pentonia. She was raised in the public eye as the ambassador's daughter, and is subsequently very familiar with customs and diplomacy, especially those of Pentonia and Xi. Her mother was a refugee from the Northern Crystallium, who passed away when Xue was 12 years old.

She has a mild phobia of fire.

Normally, Xue prides herself on politeness and diplomacy. However, she is curious to a fault, and can sometimes press people for information a little too vigorously, or continue searching for information even after being warned of danger related to seeking it or finding it. She also has a genuine love of learning, and never passes up an opportunity to learn something new, whether it's reading a new book, being given a tour of a city, or simply listening to someone's story.

Xue will not take a life. Ever. 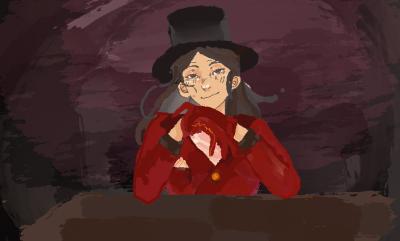