Who would not recognise the infamous Titus Marcellus Skysong from House Leoninus, Bard of the School of Glamour? Smart, handsome, and prone to end up in awfully lot of trouble. He has recently found himself as Herald of the Moon and cleric of The Laughing Twins and tied to the noose by Cassion Esharia, one of the dukes of The Magistrate of Kastradal.

For a boy mere 19-years-old, his resume is quite impressive and definitely both scandal- and migraine-inducing. Lately, he has caused a ruckus with the rumors of him being a boytoy of certain Rethirmion Adon'gisir, thought that would just be the most public of the rumors of his several escapades - if not even one of the more tamer ones.

Titus is a relatively handsome lad, though as of late he has lost a bit of weight and got a bit gaunter than he used to be. He has a habit of making his shoulders look a bit broader, as he isn't quite as muscular and broad-shouldered as some of the boys of his status, yet overall he doesn't seem to mind his more slender physique with elegant fingers fit for a musician.

As a natural redhead, Titus has quite pale skin, making him prone to sunburns. He has flaming orange-red hair, and sharp features. His face is long, but attractive, and covered with freckles.

Bardic magic is Titus' forte, though he has also taken a dip to the divine. His magic tends to be mostly based on enchantments and illusions.

Titus likes to dress colorfully, though most often he wears green. He keeps with him his "lucky coin", a small holy symbol of The Laughing Twins, as well as elegant brooch given to him by Rethirmion Adon'gisir. He is rarely seen without his magical lute.

Lately, he has also come across with a very distinct drow-made scimitar he likes to keep on his person.

Titus is a wonderful entertainer, amusing others with his song. He plays the lute and the organ and is very talented with people.

Titus was born in Songfort in Kingdom of Shausal, where his father Leonidas Marcellus Leoninus was a duke. His mother Cilia Astur was a young wild-magic sorcerer. As his father died, Titus, around 8 to 9 years old was sent elsewhere while his brother Justianus Lucanus Leoninus became a duke. His mother would soon remarry, and Titus would pretty much end up taking care of himself.

Those early childhood years were wonderful, and young Titus felt loves and appreciated. He would often invent his own theater shows to amuse himself in the otherwise rather uneventful small duchy, and brought joy to his father in his old days. His mother would spend a lot of time with him, and even as he grew older, he always felt close to her.

As Titus' father passed and his brother Justianus came to power, it came obvious that some new political alliances and plans for the future needed to be made, and so Justianus made aa decision to sent his younger brother far to island of Malvere to be tutored by the local governor, a friend of Titus' father. For young Titus, this was a hard blow, as he traveled to a faraway place where everything was new.

The First months in Malvere were torture, but as Titus settled down and befriended the governor's daughter who guarded him with such a sisterly manner, he would quickly learn to enjoy the exotic sights and mood of the island. He would find new friends and as he grew he would also gain few lovers and learn from the local humans and dwarfs about trade and politics. He was never good with books, but always witty and street smart, charming his way in social circles.

And then, the time came, and his brother after 10 long years would finally write a letter that he was wanted back home. His visit to Kingdom of Shausal was short-lived, as he would only briefly meet his brother just to be sent to The Grand Duchy of Morraine to become a mentor for a child of local noble. Taking a trip with an airship, Titus left Shausal behind.

He would not reach Morraine however, as the ship would be stopped by sky pirates, and Titus and rest of the crew ended up being sold as slaves to The Magistrate of Kastradal. Given to a local duke, Titus would partially comply, but severely distrust his new master, but he would find an unlikely ally from Rethirmion Adon'gisiir, diplomat sent by the Elves of The West. Since that, he has been in quite a curious tornado of events, that keeps just getting wilder.

Due to the sad disruption of his otherwise happy childhood and a sudden trip to aboard, Titus has since had troubles to trust and open up to others. Despite his outward outgoingness, Titus feels uncomfortable about being fragile around people he does not trust and his trust isn't easily given. Physical closeness is easier than the mental one, which makes it very easy for Titus to find some company, but he has very few true friends.

Titus may appear callous and aloof in certain situations, and his method of dealing with certain conflicts can be seen as uncaring, irritating, and self-centered. While some of these accusations indeed have a point to them, more often than not there is an element of self-preservation at work.

Titus is both smart and cunning, but not particularly book-learned. He is naturally very confident and curious and determined sometimes to the point of being stubborn. While he has excellent social skills, his inexperience, travel-lust, passions, and short-sightedness can make him obnoxious to some and careless. Occasionally his ego truly takes the best of him, but his confidence is also the source of his humility, as when proven wrong, Titus doesn't fear to admit his errors.

While it has ties to Titus' desire to be seen, he truly enjoys bringing people joy and has a calculatingly optimistic look on life. He doesn't like seeing injustice and is quick to go on the aid of those who are in trouble, and he has become better on this more recently. For him, life is full of games to play, people to meet, and experiences to have and way too short to be wasted on people that are dull or unpleasant. He faces life with a mischievous smile, hearty laugh, and with all kinds of tricks brewing in his mind.

Titus doesn't believe that it is his job is to take people's problems as his own blindly, but he does feel responsible for helping them get to a better place. That said, he can a bit too easily dismiss things that don't look "severe" enough to him. And as he has the soul of a prankster, Titus does have a bad habit of ignoring people's feelings when it amuses him, and he thinks that he isn't causing "that much harm." For those who he deems as his own he is loyal and caring if easily sidetracked.

Where most of the Titus' pranks are rather harmless, when angered, he is out for blood. Titus is cruel and petty towards people who have earned his despise - and in his mind it is only justified. Was it a personal insult or an injustice done to a friend, Titus does not forget or forgive until a sufficient punishment has been executed. Was it slap to the wrist or actual bloodbath, some kind of payback is needed before Titus calms down and lets it be.

As the 3rd son of the Duke and a natural bard, Titus appreciates recognition and attention. He is adventurous and otherwise curious, and all these things combined make him often blunge in to unknown and try to find new experiences. He can be very vain in his motivations, but in his core Titus in a good-hearted boy, that simply requires some of the wisdom that can only be required by experience and age. His thirst to experience though often seeps him with it.

After his arrival to Esharia Beleren, Titus was given to custody of Cassion Esharia. This relationship pretty much started with the wrong feet, as Titus does not quite appreciate the thought of being owned by someone. While not downright hating his master, Titus has very little respect or sympathies towards a man who so nonchalantly treats him as rightful property. Titus has started to appreciate the duchess Lyneth Esharia, whose actions have been far more understanding and gentle.

Titus has a bit more of a relationship with Quenel, a fellow griffin of the house. However, his escapades have cost Quenel quite some headache and thus, he isn't as excited about the current situation. Quenel got badly burned during one of the missions given to the pair, and Titus has since tried to nurse Quenel to health, while Quenel seems very skeptical of his abilities.

Titus' most powerful ally is Rethirmion Adon'gisir, high elven diplomat who has taken him under his wing. Originally a sidekick to get a bit own cash and make connections, Titus offered to pretend to be Rethirmion's boyfriend, as a cover-up of Rethirmion's relationship with a certain gnomish lady, in hopes that this would keep everyone thinking the elven gentleman as gay and thus not force to marry whomever his family would see suitable for him.

The relationship started as a simple professional arrangement but has turned to a strange, partially romantic, partially professional, partially friendly, and partially mentoring type of relationship which seems to be profitable to both parties. Titus calls Rethirmion affectionally as his (Sugar) Daddy, and gets infinite amount of joy from the shock their relationship causes in other people.

Titus is very keen and excited to try and impress the elven diplomat, who has showered him with kindness, advice, and opportunities, and isn't really bothered by the professional tone of their relationship. Sometimes Rethirmion's calculative nature and aloofness that comes with living so long and playing the game can get very aggravating for Titus. But mostly Rethirmion has been very generous and even caring towards Titus, and he is very grateful and appreciative of that. 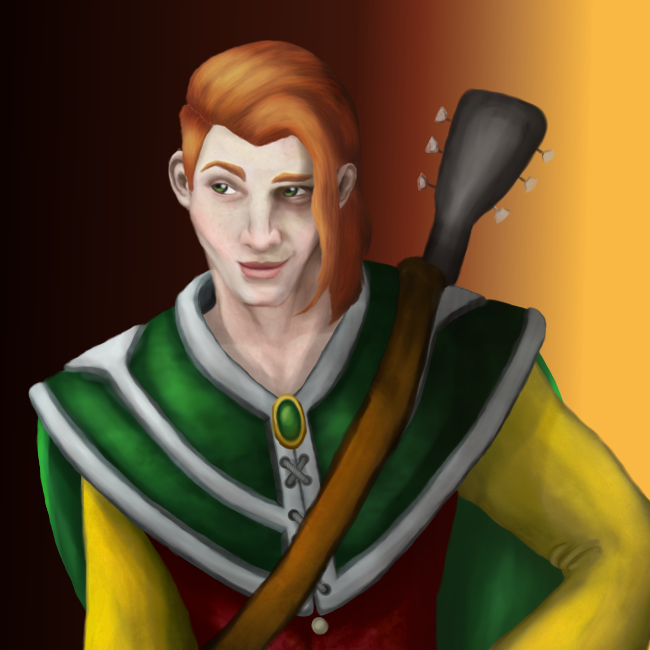 Titus Marcellus Skysong from House of Leoninus, Bard of the School of Glamour. Smart, handsome and prone to end up in awfully lot of trouble. Has recently found himself as Herald of the Moon and cleric of The Laughing Twins.

Altaros is a custom roleplay setting made to work with Dungeons & Dragons 5th Edition by Darktsuyoi and the co-writers. Altaros draws inspiration from many different sources but most of all from Dungeons & Dragons settings and the lore, mainly from Forgotten Realms. Dungeons & Dragons belong to Wizards of the Coast and I claim no ownership of it.
The World of Altaros is a work of fiction. Names, characters, businesses, places, events, locales, and incidents are either the products of the author’s imagination or used in a fictitious manner. Any resemblance to actual persons, living or dead, or actual events is purely coincidental.
Article template
Character
World
Altaros
Category
PCs in Characters
Author
Tiirikka
Publication Date
31 Jul, 2019
Creation Date
31 Jul, 2019
Last Update Date
11 Jul, 2021
Visibility
Public
Views
188
Favorites
Comments
0
Work In Progress