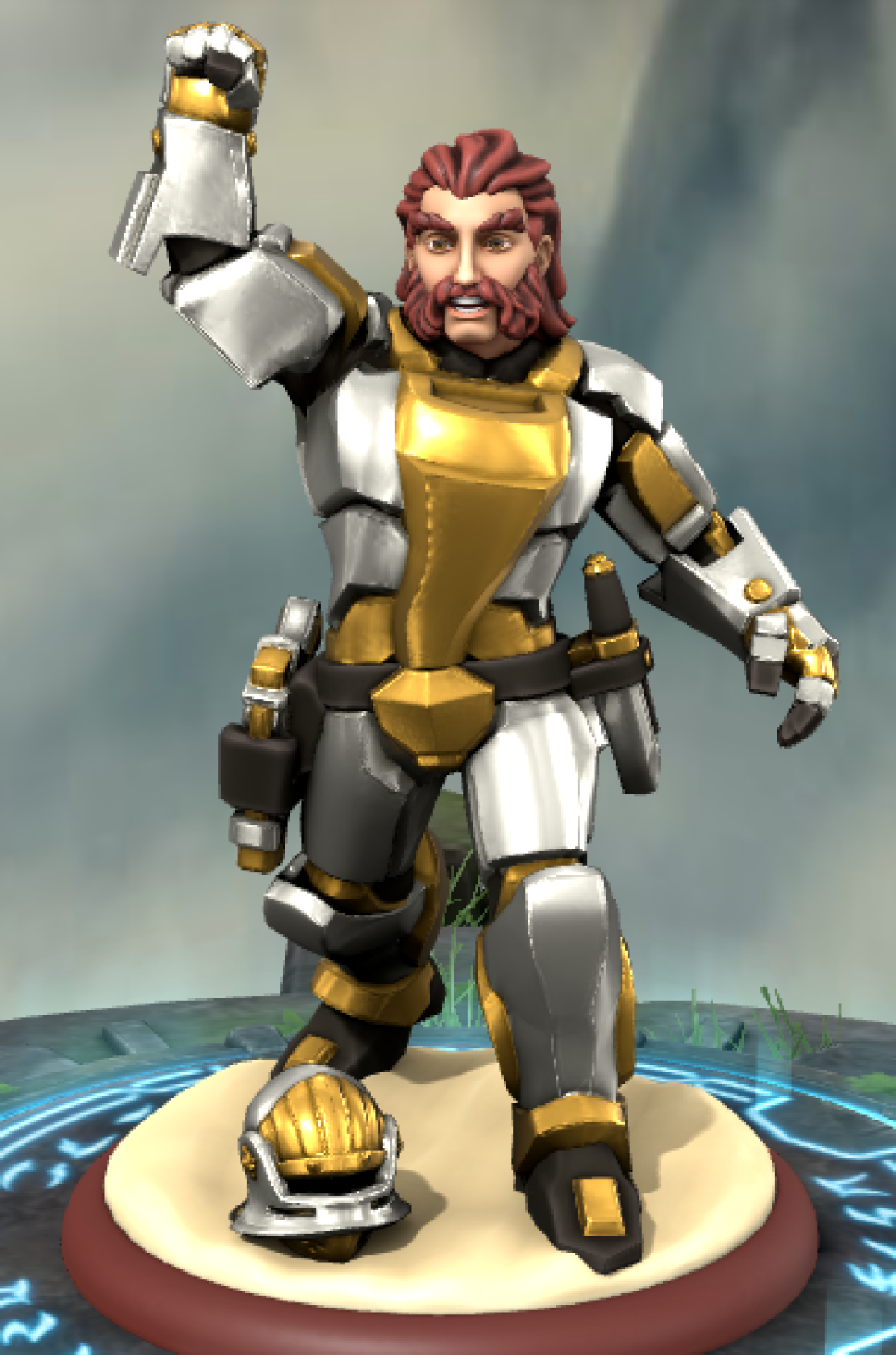 Sir Benjamin Lagris (a.k.a. The Brightener)

...My friends, we stand at the precipice of something most in House Vaikyn thought impossible not but two months prior. It is thanks to each and every one of you brave men and women, and the sacrifices that you and your families have made for generations, that we stand merely a mile from the gates of Belraith, prepared to take the city and remove one of the aggressors of this bloodshed. If I may be so bold, I ask you on this day to follow me into what may be one of the greatest achievements this fractured nation has seen in millennia - join me, and let us bring down the unjust rulers that would see this war continued!
— Sir Lagris during his speech at the second siege of Belraith


Sir Lagris was an accomplished tactician during the Tyrralorean Civil War, and was responsible for some of the greatest victories that House Vaikyn had seen to date. His lead-from-the-front style of tactics not only raised the morale of the troops who would follow him into battle, but his presence alone on a battlefield was at times enough to cause the enemy to break ranks and flee as he charged through their fire. Though many had seen his actions as reckless - as he commonly threw himself into the line of fire for better or worse - the results he presented to the nobles of his house were more than enough to prove his worth, both as an asset on the field and as a true Knight of Gothrane. Though his life may have been short - and his death shorter - what he left behind had a far greater impact on both the nation and its people, leaving the nobility scrambling for a defense after the failed siege and the people inspired that change was ultimately possible.

The man we know today as Sir Lagris certainly didn't start out as a prodigious strategic mind like some may believe. In fact, Benjamin Lagris was born into destitution on the lower streets of Vaikous. Almost in spite of these conditions, his parents believed that a warm and beaming smile can do far more than make ends meet, a mantra that the young Ben took to heart completely. Though life on the poverty-stricken streets of a Tyrralorean bastion city certainly wasn't easy, "Lagris" - as he was often called - sought to make the best of things by proving that surprisingly, being a bit nicer than your surroundings can go quite far. Of course, he was often times burned by bad deals from others in his level of destitution, though he never seemed to take any of it to heart, understanding that he would probably do the same if he got that desperate. His "call to action" so to speak finally came when he turned eighteen - the minimum required age to enlist in the Tyrralorean Defense Initiative. From there, Lagris would seek to prove himself just as worthy as anyone from the upper streets, smiling all the way through.

The Trials of War

They say that war changes you, right down to your core. They say that killing your fellow man on the battlefield can do horrible things to your mind. These things are undoubtedly true - many lives have been scarred by what they have seen fighting in the Sansurath. Though if you took one look at Lagris, you wouldn't be able to tell if that were actually true. In fact, his bright smile was oftentimes the only thing that kept up morale in the darkest of times. This came with the ire of his commanding officers, as they often found their troops more likely to follow the words of Lagris than their own. This came to a head in a skirmish where Lagris' CO ordered them to hunker down and prepare for the enemy advance. Lagris, seeing an opportune moment to strike at their foes while they were unprepared, lead a small group into the Belrithain camp and managed to assassinate both of the officers coordinating the attack in the night. They managed to swiftly cull the majority of the attacking force before alerting the camp. This of course lead to a swift retreat as the enemy believed that they were now outnumbered, and allowed Lagris and his crew to return shortly after sunrise. His CO was furious at this apparent mutiny, but Lagris rather lackadaisically replied, "What enemy?" He was immediately sent back to Vaikous to be disciplined, but to his surprise they relished in the opportunity to show the often tactically superior Belrithians what they were capable of. Because of this, alongside the apparent effect his presence had on the morale of their troops, the nobility of house Vaikyn gifted upon him a squire-ship in the Knights of Gothrane - something that was at the time seen as incredibly shameful as he wasn't of noble or even upper class blood.

Once in the esteemed order of knights, his tasks only became more difficult as his abilities were constantly put to the test by the knights and grandmasters above him seeking to prove him unworthy. Lagris simply took it all in stride, and performed well above their expectations - even on rare occasions outperforming some of their best! This was something he saw as necessary in order to show that someone can become a knight regardless of who they are or what they come from. Much to the dismay of his superiors, he was quickly promoted to a full knight, which gave him both the title of "Sir" as well as access to his unique Gallantry. He decided to buck the established trend of massive, hulking, and intimidating war machines in favor of an advanced suit of power armor with an even more advanced information suite. When asked about this decision, he replied with, "I'm a simple man, I don't need a walking tank to prove what I can do. Besides, if I can't walk amongst my fellows on the field, then what kind of man does that make me?" Upon this acquisition, he was allowed to choose a force of his own to command. To his onlooker's surprise, he chose his previous battalion, and even allowed his previous CO to maintain his position provided he could adjust to taking his orders for a change. With his "crew of misfits" as they were often called, he went on to give both House Belach and House Cerroni a run for their money, winning back territory at such a frightening rate that the two officiated a temporary ceasefire to deal with this new incursion.

Sir Lagris' name quickly became known throughout all of Tyrralore, be it as a hero in Vaikous, or as a monstrous villain elsewhere - though the already untrusting populous easily saw through this simple deception. His escapades continued so greatly and effectively that he would drive House Belach into the second siege its walls had ever seen. In mere days, Sir Lagris would give his last speech to his friends and troops before leading an assault on the walls. Were it not for the Troyan warmongers who aided the Belrithians in their time of desperation, the siege would have succeeded and possibly resulted in the end of the hostilities. But unfortunately, Sir Lagris was faced with such a large and unexpected force that for the first time his clever tactics proved useless, and he was forced to retreat. In a sick irony, the enemy used his own tactics against him and relentlessly chased his paltry force for miles across the sands of the Sansurath. Eventually, after witnessing one of his close friends fall to these attacks, he informed his troops to continue the retreat while he distracted the enemy, choosing to give up his life instead of sacrificing more blood to the enemy. Of course, his foes immediately stopped their pursuit to focus on him. He was easily subdued by the sheer number of opponents, and executed on the spot. This retreat lead directly into a downward spiral for House Vaikyn, culminating in the Last Stand at Aberrant Pass.

Sir Lagris taught all of Tyrralore a few important lessons. Firstly, he taught the populous that where or what you come from doesn't make any difference if you are determined - or stubborn - enough to make something reality. Secondly, he further cemented the the importance of the Knights of Gothrane in the military stratagem of House Vaikyn, proving that investing in even a single worthwhile individual could change the entire tide of war. And lastly, he served as the greatest force for unity the fractured nation had seen in several-thousand years, even going on to inspire such thoughts in the individual who would eventually and finally bring the conflict to a close. Because of all of this, he was posthumously granted the title of "the Brightener" by lady Regulus Vaikyn, upon the reunification of the nation.

Sir Lagris was known for his powerful and booming tone of voice accompanied by his vigorous hand gestures and beaming smile. This natural charisma alone got him through the majority of his life, be it on the streets, on the battlefield, or in the halls of his fellow Knights of Gothrane. 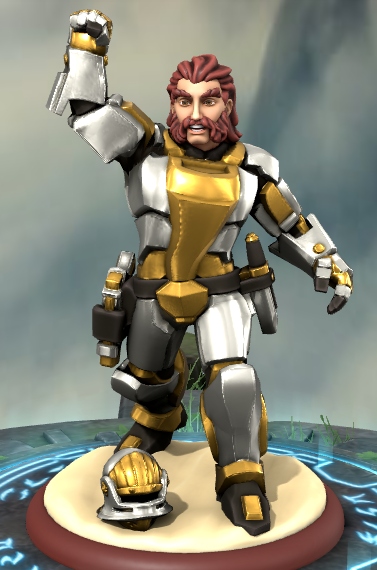 Pictured above: Sir Lagris in his Gallantry giving his final speech to the troops at the second siege of Belraith.

"Bravery does not come from money, virtue, or cause. Bravery is looking out across a broken battlefield and its battered people and pushing yourself to end it all regardless of cost to yourself. Bravery is staring your fellows in the eye and telling them that no matter what happens I shall be at your side through it all."

"My opposition would dare to call me a monster. Well, would a monster look back at those who follow and grant them a smile of assurance? Would a monster personally go to the families of his fallen comrades and thank them for their sacrifice? No sir! A monster would look back at his fellows with scorn - a hatred for all those who would shed blood, regardless of cause. A monster wish this senselessness continued for the sake of violence! There are few things in this world I despise, but one who can truly be called a monster? That tops the list."

Recovery of the execution footage used as propaganda by the other Houses lead to the discovery that the original footage had been altered slightly: there was a missing portion where Sir Lagris could be seen looking straight into the camera and stating "No fear" before the shot rang out. This was likely cut by his executioners because of the obvious effects this would have on public perception of the houses involved in his execution.
Tyrralore

Sir Lagris sounds like an amazing tactician, and it's a shame he perished so soon! He certainly would have made an incredible leader outside of war as well. 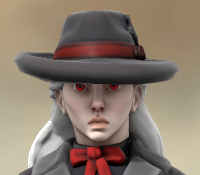 Indeed! Were it not for his death, it is likely that the war could have been brought to its end. Even then, this was the closest anyone had gotten to ceasing the hostilities for millennia. I often find that one's choice profession is not what grants them their ability to lead, but rather how certain they are of their path and choices, and how that is outwardly presented.   Thank you for the comment! 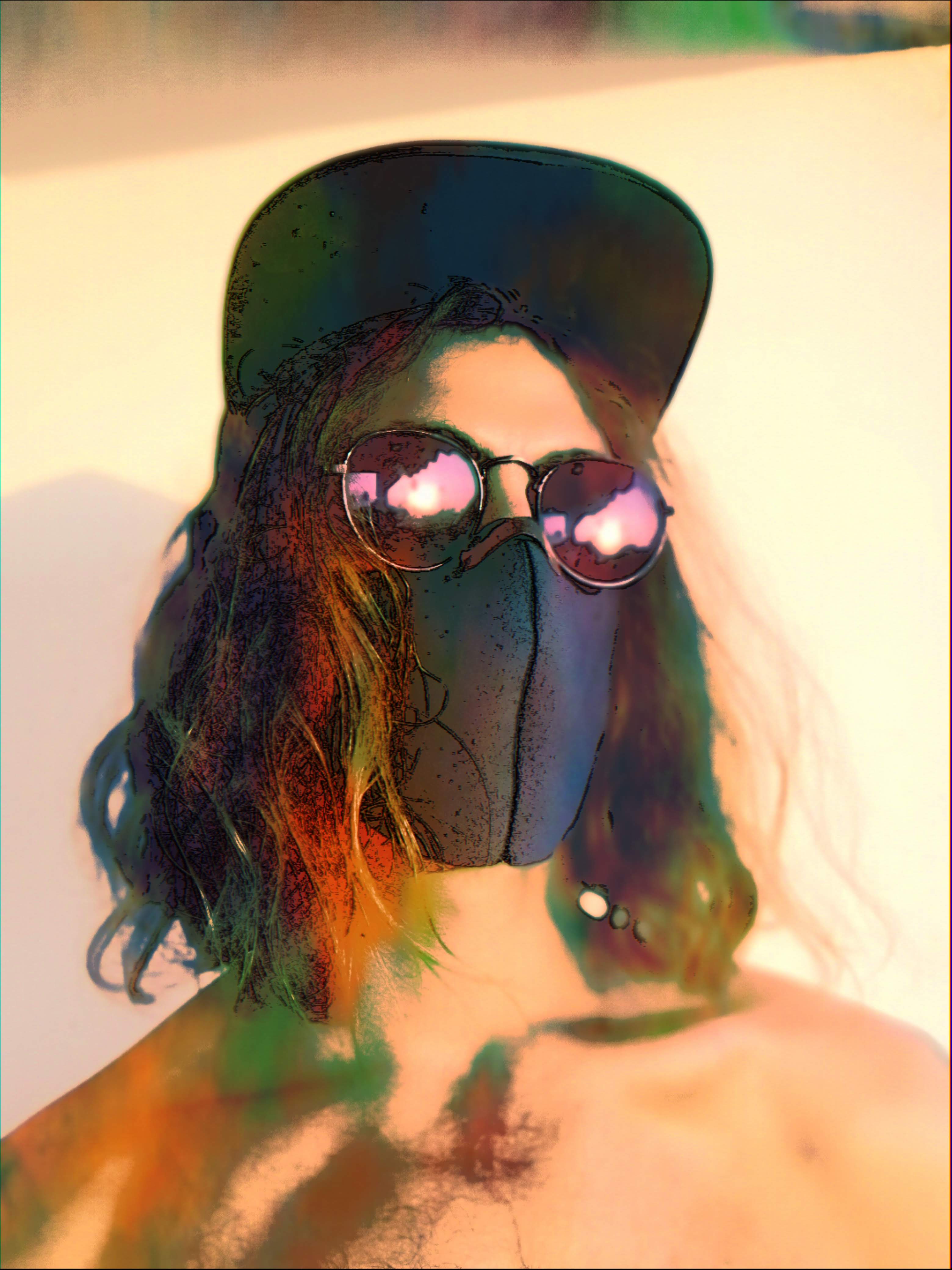 The good die young, huh? Sound like a brave man that perished as a hero to his people. I wonder if he would have stayed so pure, were he to live through war longer. In the end, war makes villains of us all. Great read!

Indeed, a lesson for us all. For even those with the best laid plans can still falter to dire treachery - to perish at the hands of the nation you wish to save.   Thank you for the comment!