Alakel is the far southern continent, famed for its vast deserts and savannas. Most of civilization on this continent is centered around the coasts and river systems, with few, if any, population centers elsewhere. Alakel is also infamous for being the heart of the Allaryan slave trade, which was created by the Jassan of Toriket, and perpetrated by the Haraselvi slaves who rose against them and refounded the city of Istariket on the ruins of their former masters temples.

The Storm Sea: A large sea north of Alakel reputed for frequent, powerful storms, especially during the autumn months. However, close to Alakel the storms are less frequent than elsewhere in Allarya.

The Great Strait: A wide strait between the continents of Dorida and Alakel. It can be difficult to navigate due to stagnant winds and chaotic currents, though is frequently sailed, nonetheless.

The Keiani Sea: The sea to the east of the continent of Alakel. It is known for its warm waters, reefs, and Mer populations, and is considered a sister-sea to the Sirenian Sea to the north, near Dorida.

The Messinian Sea: The sea to the west of the continent of Alakel. It is known for its cold waters and fair fishing. Strong cyclic winds make it relatively easy to sail between the northwest coast of Alakel and the southeast isles of Qillvaeon.

The Shaeviri Plains: The vast, rolling savannas which make up most of the eastern half of the continent. There are isolated shrubs and trees and frequent droughts, with hot, wet summers and warm, dry winters. Towards the south and near the Ramal Mountains, the savannas give way to more arid, dry steppes, though pockets of small deserts and badlands persist throughout the plains.

The Akkari River: The great river which is the heart of civilization on the continent. Periodic flooding creates a very fertile floodplain in the western Shaeviri Plains, which marks a transition between savanna to the east and arid steppes to the west towards the mountains. The river forms a relatively unbroken waterway between the Storm Sea and the inland Aseluk Sea, which enriches trade in the region.

Bhaatar: A dense jungle on the coast, between the Shaeviri Plains and the Great Strait. The summers are full of powerful seasonal storms which batter the region. The region is known for its many colorful and unique flora and fauna.

The Ramal Mountains: Sandy, rocky mountains separating the Shaeviri Plains from the Manat Desert. They are bordered by craggy mesas and rough foothills on both sides, with one major pass towards the north.

The Manat Desert: An improbably vast desert which covers almost half the continent. Few, if any, oases exist, and rainfall or vegetation is almost nonexistent.

Evubathi: A region of savannas sandwiched between the northern Manat Desert and the Storm Sea, with hot and wet summers. The inhabitants of the region are largely tribal with a few larger cities and are the only ones to frequently traverse the Manat.

Dahmesin: A fertile region between the western Manat Desert and the Messinian Sea. The winters are wet and temperate, though the summers are too dry to grow in and can bring an occasional sandstorm from the desert. It was largely uninhabited until Jassan refugees colonized the region during the late War Age.

Alarari: A relatively uninhabited region south of Dahmesin. A series of low mountains and foothills separate the Manat Desert from vast tracts of forests. To the west near the coast, there is a small unspoiled paradise, with palm trees, beaches, and offshore reefs. The people of Dahmesin will venture south for lumber at times, but rarely stay long enough to tarnish the region.

The Masak Mountains: The tallest mountains on the continent, separating the inland regions from the Keiani Sea. It ranges from the far north to the south-east edges of the Aseluk Sea, where they become known as the Bian Mountains to the local Taian humans.

The Aseluk Sea: A large, inland freshwater sea fed by springs and rivers from the Masak Mountains and Shanmai Peninsula. The waters are remarkably clear, and those who sail them can see hundreds of feet deep.
The Shanmai Peninsula: A mountainous peninsula known for its dragon populations. Few explore it, though the few ventures into them have returned with word of veins of precious metals and gems.

Shunin: The only largely inhabited region near the Aseluk Sea to its south. It has a moderate climate, with fairly cold winters, is known for its fertile river valleys and timeless, peaceful vista.

Caitan: An isolated region at the far southeast of the continent. The south has bountiful fishing and fertile tracts of land, and the north is known for beautiful plains and forests. Like Shunin, the region has a moderate climate, though the summers are slightly hotter and the winters slightly colder. 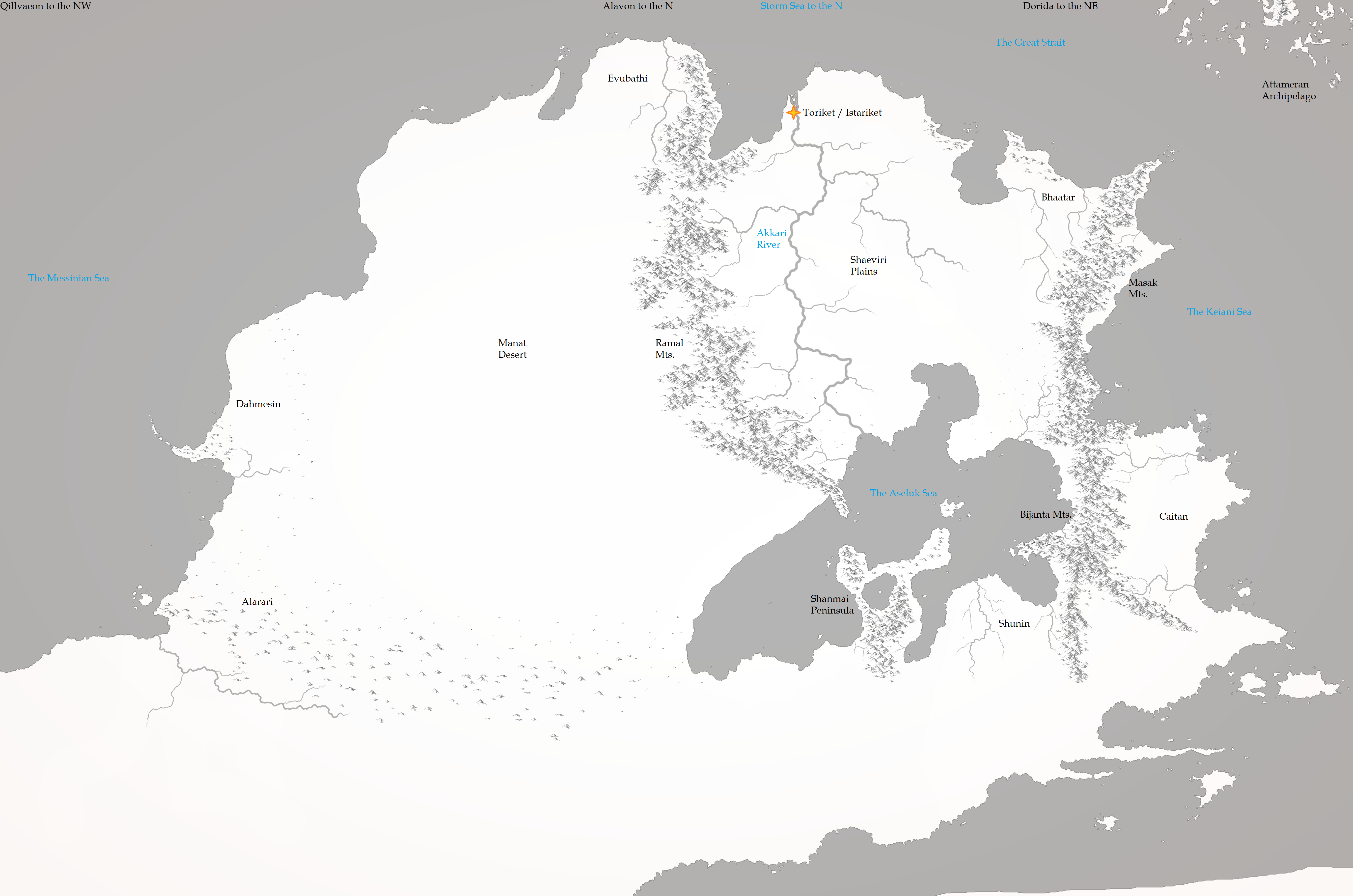 
Remove these ads. Join the Worldbuilders Guild
World of Allarya