The Alkewans are famous for their eccentric style of dress. Among the special items of clothing, rebolettes occupy a decidedly extravagant place. A milestone in Alkewan quantum physics that has enabled the Alkewans to escape their loneliness. In order to undertake a pleasant and hazard-free rainbow journey, appropriate safety shoes must be worn. Those shoes are called Rebolettes. Without these shoes it is not possible to walk upon a rainbow. If you don't own a pair yet, ask Shawn At The End of The Rainbow. He always has a pair of second-hand ones for the hiker in a hurry.

Professor Prismut Okkulmeyer was the first to establish a connection between quanta and feet. The difference between the smallest known particles on the one hand, and feet on the other, is negligible once their similarities are highlighted. First of all, they are omnipresent. Most people like to forget them both, although they are used every day and therefore require more attention. It is always surprising how people treat their feet. The same applies to quanta. In addition, quanta likes to move unprepared in different directions, which is called "stumble" in the scientific jargon.

Only by means of quantum physics is it possible to flow out of a glass, stand on a wave, or walk through walls. In a scientific rainbow experiment, Professor Prismut Okkulmeyer found a way to connect the smallest particles of water with the waves of light in a rainbow. Because of that, rainbows can be changed into a more solid shape and can finally be touched. This compound is reminiscent of jelly and feels slippery and slimy, so the professor named his invention "Rajed", which is the short term for "Rainbow Jelly Device". Not a particularly flowery name, but that's the way scientists are. 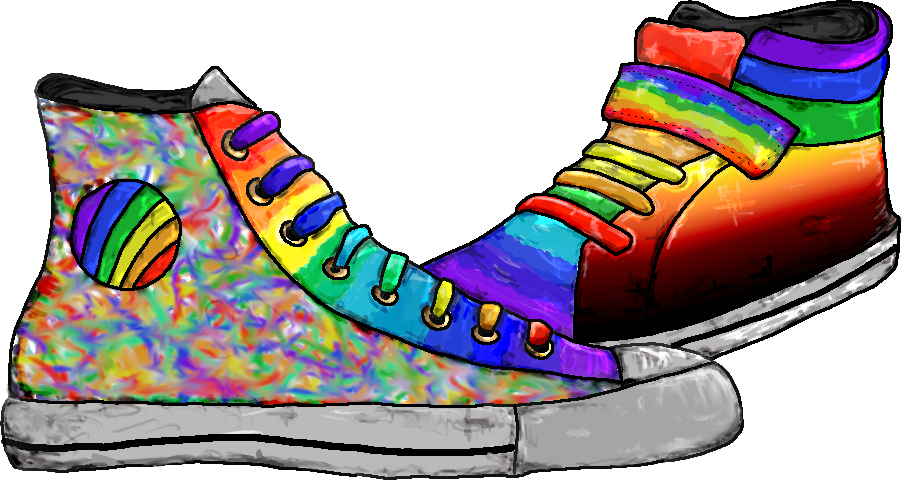 Reboletten by Walzman
A little later, the idea for the first pair of rainbow shoes came up due to a lucky coincidence. Actually, the professor had only planned to give his wife a particulary colourful birthday present. With his new invention, he aimed at a small rainbow near his garden, turned it into jelly and put it in a vase. He waited for the right time to surprise his wife. However, the professor had done the math without his cat Schrödinger. Like all cats, Schrödinger liked to jump on tables, lay over important letters and documents and sometimes knock over the coffee mug. This time, Schrödinger nudged the vase with the rainbow with his fat backside, which fell down and shattered into a thousand pieces on the floor, making an awful sound. Furious and upset, the professor came running and shooed the clumsy cat away. He chased Schrödinger through the kitchen and both trampled wildly on the rainbow jelly scattered on the floor. A little later, when the professor had to clean up the whole mess, he noticed that the stomping and hopping had given the rainbow jelly an even firmer consistency. The pressure of his feet had changed the rainbow jelly. It now felt like thick snow, only not as cold. Completely astonished, the professor immediately ran to his laboratory and did further research. He was so excited that the dirty floor, the broken glass and his wife's birthday were forgotten completely.

Numerous hours and days passed, but eventually the professor had finally done it. The first pair of rainbow shoes stood up on the table right before his eyes. Back then, they were large and heavy and more comparable to ski boots. But over time, Professor Prismut Okkulmeyer refined his invention and made it smaller and smaller. Today, "Rajed" is so small that it can only be seen under the microscope. It is added to the colour, which is applied to the rebolettes. The right amount of Rajed mixed to the paint is really important if one wants to take a rainbow trip. The mix ratio is top secret and the professor guards it well so that it does not fall into the wrong hands. Actually, it is not necessary that all rebolettes always have a brightly colored appearance, but the professor still refuses to this day to produce models without all the colours of the rainbow. This stubbornness probably runs in the family, because his wife also accuses the professor to this day of having forgotten her birthday 27 years ago.
Gegenstandsart
Clothing / Accessory
Available in sizes of 5 to 13
Eco status is approved! Solidified rainbow liquefies through exposure to the sun and leaves no residue apart from light and water!

by Walzman
In response to the prompt Tell us about an item that is unique, wondrous, or magical!
Unless stated otherwise, all content is ©2018-2020 André J.G. Walzer. All Rights Reserved.
This site is a work of fiction. Names, characters, places, brands, media, and incidents are either the product of the author’s imagination or are used fictitiously.
Third-party content belongs to its respective owners and may be subject to different licenses.