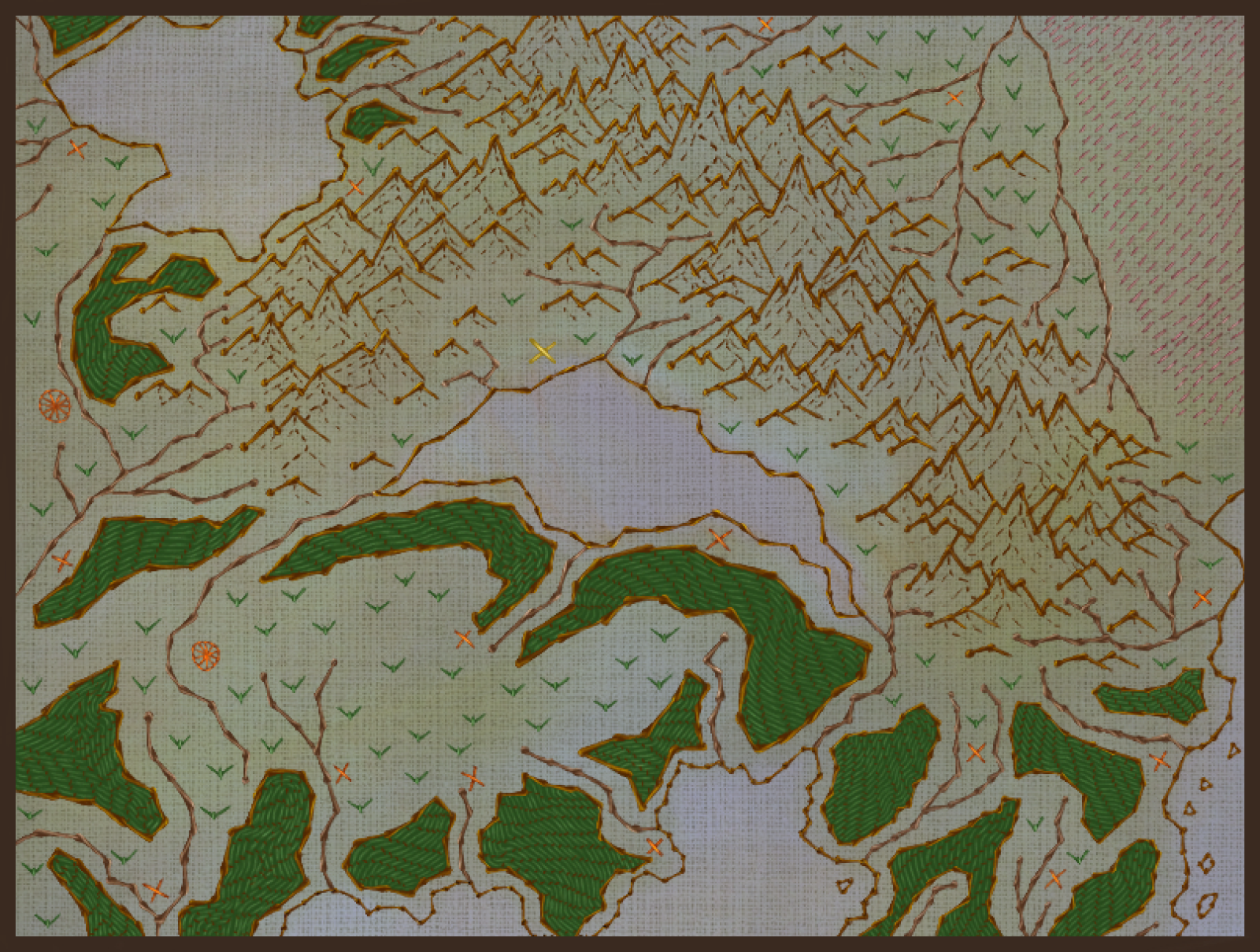 "This piece of art is the foundation of every map both in Bucathian societies and in ours. We can thank the Bucaths for broadening our knowledge of how our world looks like."

- Taen Durall in one of his lectures.

The Khena'Prin (Khena's map) is the only hand-sewn map made by the Bucaths that has managed to find its way to a human country. The Bucaths are known to never sell, trade or give away their precious hand-sewn maps due to the traditions and history which are connected to these handworks, and yet somehow this rather old-looking map is now located in the largest university in Estain.

Khena'prim
Open full size
This map is an embroidered map made by the Bucaths. It is the only one available for other species to look at.
Further information about this map can be found in Khena'prim

Like all bucathian maps, the Khena'prin were outlined with a traditional needle called Thuat. The colours that is normally very vibrant in these kinds of maps have fainted slightly throughout the years, but you can still see traces of the colours that were used in the thread works.
Normally the outline of lands, mountains, and rivers are done in air with the thuat and a brown thread, the water is coloured on ground by dripping watercolour onto the fabric, the other details are added like this as well. Further details are added by a more normal thread and needle if the family can afford this, but getting needles made thinner and by metal are quite expensive, and so far the Bucaths can only trade their paper-based maps they make.

General History about the Bucathian maps

"By the Goddess, this is nowhere the artistic level of our cartographers today. How absolutely dull this is supposed to be the forefathers of maps."

Throughout the centuries the Bucaths have made hand-sewn maps in air by combining their knowledge and skills. Every Bucaths makes their own hand-sewn map as part of their coming-of-age ritual, that's why every hand-sewn map are so important to the families of Bucaths.
While not much is known about these maps, Taen Durall have previously managed to at least get a few information out of this secret cultural aspect of the Bucaths. Whether the Khena'prin truly does contain details that differs from other hand-sewn maps is yet to be documented, however scholar Durall is currently the only person who knows more about the Bucaths than any other Dynbodaul, thus we can only take his word of this.

Known history about the Khena'prim

The name Khena suggest it was found near the settlement Khena in a small inn, located on the south bank of the freshwater lake Lyni in Magaun, which is fairly close to the largest settlement of Bucaths near the Myndoed Gallina.
Some scholars suggest it was stolen others suggest it was gifted, which would be very rare indeed due to the importance of every hand-sewn maps. The reasons for this map were in Khena is only guesses, no evidence of either theory have been found.

During the invasion of Magaun by Estanian forces in 421 AGD they had Khena occupied, and stepping into the church, they saw the Khena'prin hanging on the wall. They brought the map to Estain which is still its home. In recent decades, Magaun have tried to persuade Estain in giving back this precious art piece but have been denied.
Scholar Durall is known for his studies of the Bucaths in Magaun, have started several discussions whether the Khena'prin should be returned to their tribe, arguing that the tribe feels robbed by an important cultural artefact made by their ancestors, but neither Magaun nor Estain seem to be interested in taking part of this discussion.

"The Khena'prin is considered to be priceless due to its rarity amongst the Dynbodauls and other species except for Harawyrs. Even amongst the Bucaths this map must have been rather important, since it contains details that differs from the current maps made by them."

- Taen Durall in one of his lectures

I adore how much story can be woven (I'll see myself out) around this special map. The map design is gorgeous and complements the story very well. I found the little piece of history very interesting, about how the map ended up where it is now and how the owners don't want to give it back - that's a neat and lively detail.

Thank you so much :D

Very nice piece of work! The art looks great and really makes it seem woven. I also like that you even added the detail of where the colors of the fabric come from. Also a well thought out and interesting history :)

Thank you so much. I love diving into small details :D

First of all, the map is really great. You can really see all the work you put into it. Apart from that, it's also a nice article. So the map is at least once looted property. Maybe twice, but we don't know that for sure. Maybe the map was from an exile and that's why these people aren't that interested in it. Who knows, who knows. Maybe something for a next article. Thanks a lot anyway ^^.

Perhaps. I like leaving certain things for the readers imaginations. Beside I do like make some countries more arrogant towards other cultures :P

Wow! It's wonderful! Did you use some program to make the map or have you really woven it?

Thank you so much. I drew it in CorelPainter, took me a couple of weeks. That said, I do make embroideries, and all the stitches are all inspired by real embroidering stitches, except for the outline, which is a stitching method I made up.