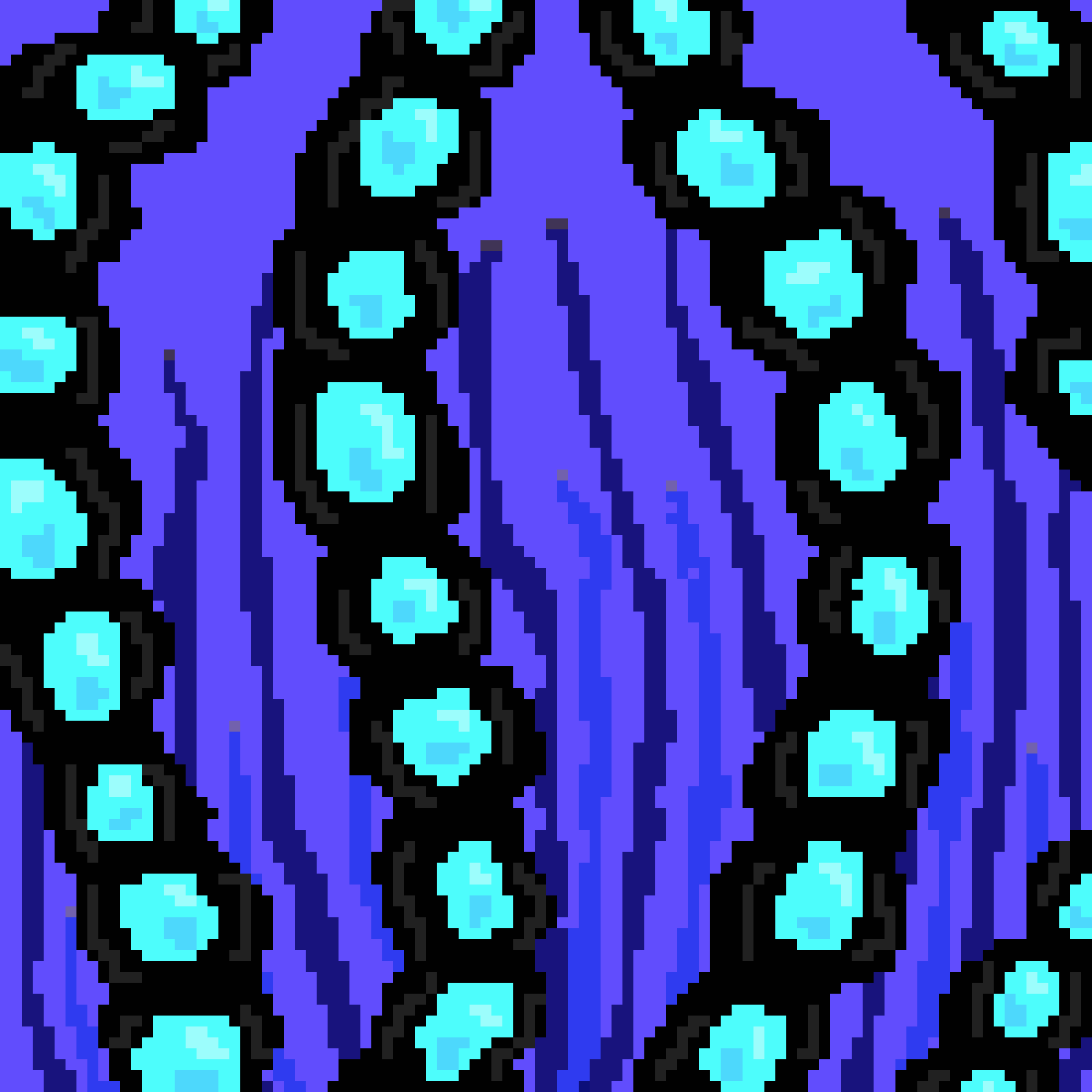 Azure kelps. Blood of our city that assured its existence.
— Chronicler of Golvageth, entry 11

Growing in a hostile environment

Azure kelps are one of the few things coming from the sea surrounding the Urnketh that have been researched and repurposed. They have a few traits which make them highly unusual even among other organisms living there.
First, they grow at an appalling rate, growing over 50 cm per day. Second, they are extremely resistant to high concentrations of Colors, gradually suffering from Oversaturation (condition). The oversaturation area affecting them increases at the rate of 2 cm per hour. This leaves a small (but growing over time) portion of their body that isn't affected by the condition. This makes them the only sea organism that's never fully oversaturated.

Depending on the depth at which they grow, the azure kelps will take on a different appearance. Close to the shore, where there's only Blue Color present, they tend to be solid azure (which gave them their name) and their blades are smooth and straight. Not much farther into the sea, at the place where the sea bottom drops and the Blue gets replaced by impenetrable Black, the appearance of the azure kelps changes drastically. The blades become almost completely black with bubbles of bright azure in the middle. Their shape also changes forming a chain of circles.
No matter the type, the part of the kelp that still is unaffected by Colors has a dirty olive color.

A great source of Pigment

Once fished out of the water and brought back to the land by Kelp Gatherers, the kelps are put into extractors which then suck out the Colors contained within the organism and turn them into Pigments, which can later be used for Color embroidery, as magic components and in many other industries needing the supply of Colors.

And a great source of protection

What's left behind is the body of the kelp. The parts changed by the oversaturation are burned, serving as good fuel for the flames. The part that was unaffected by the influence of Colors gets divided into two parts. The kelp gets cut about 10 cm from its end. Those 10 cms will be put back into the seawater, leaving the organism to regenerate, The other part, which length depends on how long the azure kelp grew will be sent to be used in the creation of suits resistant to the Colors.
Type
Biomaterial
Maximum length:
Indefinite, limited only by how fast they are eaten/harvested   Color contents per type:
Shore kelp:
Deep kelp:

Fishing for azure kelps is a dangerous job. While inedible for sapient races, there are many sea creatures that like to snack on them. Because of that, it's pretty common to pull out something else than just them. And rarely the creature will be happy that it was pulled out of the water and that its meal was interrupted.   In some cases, additional azure kelp forests are planted. Some to provide the food for sea creatures. Some to lure them in and capture or hunt them for their resources.

If the number of kelps in the area drastically drops, some of them stop focusing on growth and instead start to fragment their growing parts, letting themselves be oversaturated. The fragmented parts start to float with the currents, grow, and create new specimens. Once they touch the bottom of the sea, they stick to it and form holdfasts that anchor them in place.

Interesting article! Your color world is always fun to read, but this article left me with two questions: first, you write both that the kelp is planted and released. Is it always rooted, or does it sometimes drift until it finds a place to settle down? How does it normally reproduce?   The second may be due to my knowledge of your world having become rusty, but why is this kelp one of the few things coming out of the sea being used?

Just added a section on reproduction to answer your first question.   For the second one, not many things from the sea are used because dealing with stuff that's oversaturated is harmful to live beings. Additionally, kelps won't try to actively kill you when you try to fish them out, so they have been chosen to be the easiest source of Pigment (and something protecting from Colors) from the sea to deal with. And if you have them, you don't really need to gather anything else from there (unless it has some other, useful properties).

I love the idea here, a plant that's evolved perfectly to avoid oversaturation in such a clever way!

Fun stuff! I am intrigued, what happens if kelp stands reach the surface, do they keep growing? And has anyone tried growing it in pools or other areas with less dangerous beings in them?   PS: Aside from the issue about oversaturation links that I mentioned in the Kelp gatherer article, there is also a link that appears to be a draft to the kelp species itself? (showing as bold)