Sired by a bloodline of Dire Wolfhounds of no particular note, Hrevart had the powerful size and physique typical of his breed but was not considered to be a desirable purebred. Consequently, both he and his brother Dinpheer ended up in the service of commoners, where by rights they should have lived and died in obscurity. Some older, wilder blood must have stirred in them, however, for when trouble came upon them both revealed themselves to be paragons of their breed. Dinpheer's story is recorded elsewhere. What follows is the tale of the Faithful Hound Hrevart.   Purchased as a pup for a mere handful of copper and a hot plate of soup by Alger of Snowpoint from an itinerant hunter with more hounds than success, Hrevart was given a name that means "Guardian Spirit" in the tongue of his master. In contrast to the implied gravitas of both his name and breed, Hrevart lived his life hunting only rodents and small mammals with the soft spoken fur trapper.   Alger of Snowpoint was a simple man with a fervent love of the outdoors and an anxious aversion to social gatherings. He lived in various places up and down the mountains of north Draakfall, building sturdy cabins for himself and staying there until the wanderlust moved him. Whatever necessities he could not procure for himself in the wild he obtained by trading furs at whichever settlement he lived nearest. In the thirtieth year of the reign of King Iollrevr, as the days were growing shorter, Alger and Hrevart were traveling to the town of Skalfront to trade. A fierce storm arrived in the late afternoon, and little inclined to spend the night cold and wet when they were but a few miles from town, the pair pressed on into the night and thus surprised the troll Gnorgrivnr as he crept under cover of rain and darkness.

It was during the wet season that Hrevart and I journeyed to Skalfront for supplies and met Gnorgrivnr late in the evening some miles from the slope of Snowpoint Mountain. The great beast had set its eyes upon the settlement and intended to feast there. The previous growing season was prosperous and the creature had grown massive and reckless after months of gorging on wildlife. My arrows were meaningless to it and my threats it heeded not, so Hrevart sprang upon it and tore at its throat. I called to him but his baying told me that he had found his quarry and would leave it not. I believe now his blood must have been singing, for though his kind was bred to slay mighty monsters, Hrevart had never hunted anything larger or more dangerous than a stag. Unable to persuade him, I made haste to Skalfront to warn them of the danger and gather men of strength and a mystic.   My dismay was great when I learned the only mystic had departed that morn, and his replacement was not expected before week's end. Greater still was my dread when the men who heard my tidings fled to their houses to gather their families and retreat. Therefore I carefully collected fire from the hearth at the tavern and protected it against the elements and made to return to the battle where my hound alone held the beast at bay. Twice the vicious wind and rain tore the fire from my hands and extinguished it, and bitterly did I curse the sky and vainly did I cry for help in the empty tavern as I pulled embers from the dying hearth.   At last I regained my companion's side and saw him standing vigil over the corpse of the monster, daring it to rise though his own entrails spilled from his belly. The creature, known for its ability to heal any wound, was nevertheless scored with a thousand lesions and struggled to return to life. With great difficulty I fed fire into its injuries and set it alight.   I sat beside Hrevart as the beast burned but did not touch him, for though he trembled at the effort his eyes did not leave the form of Gnorgrivnr until the last firelight faded. I spoke to him in the early hours, or blubbered perhaps, and told him I am sure of many great things, though I remember them not. When he was satisfied that the monster was indeed gone, he placed his head on my thigh and departed immediately.   I laid him atop the ashes of his foe, that he might reign over it in triumph eternal, and covered him with stones. For 10 years I carried stones to the site, until I was satisfied with his monument. I carried one stone for each life spared on that night. I did not allow the men of Skalfront to help me but I mocked them not, for I saw shame in their eyes. Thereafter I never traded in their markets again.

As might be expected, the adults at the time of the event were not overly inclined to repeat the tale, as what seemed to them in the moment to be prudent caution looked positively cowardly in hindsight. Their children and grandchildren, however, embraced the story enthusiastically and considered both Hrevart and Alger to be local heroes. Though Alger allowed none to assist him during his decade long memorial, when he departed the region after its completion many youth adopted the site as a point of regional pride. Though Hrevart's massive cairn would have attracted a fair amount of attention on its own, much of the dissemination of the story is due to the excited retelling by the town's younger residents to any and all travelers who passed through.   In the decades that have passed since Hrevart's death and the building of the cairn, interest in the tale has diminished to a more restrained level. The story is no longer controversial - given the passing of most who were adults at the time - and without the rebellious allure of an event embarrassing to one's parents, modern youth are much less fervent in their admiration. Nevertheless, the account of Hrevart's final stand in the storm battered forests north of Skalfront remains a staple around inn hearths in the region, and his cairn is still maintained by a few aging townsfolk who were children on that night.   In the aftermath of the event, great interest was poured into Hrevart's bloodline by many hound breeders. Given that both he and his brother exhibited unusual courage and strength, and because neither sired heirs, much effort was made to find other members of the line. Only one other pup was found that was confirmed to be of Hrevart's litter, and though he was strong, he was not especially so. Records of the father were similarly mundane. So what strange power moved in the two brothers? Was it blood, the echo of some some mighty ancestor, or were these two hounds possessed of some other, unnamed spirit? Many years have now passed, and the question is - and will likely remain - unanswered.
Related Locations

I'm a sucker for dog legends. This reads so much like a real-world folktale. I love it. Well done! 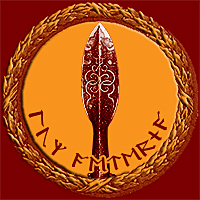 Thanks! I was inspired by archetypal "Faithful Hound" legends, so that's probably why it reads so.