"You are too impulsive. Stop. Look. Think. Learn. Then act."
— Claire Branwen, Magus of the ADP


Among scholars and intellectuals, finding someone with an affinity for the Frost element is commonplace. It is the element of magic of those who like to analyze their surroundings and unveil the mysteries of the world.

Frost is the element of Reason; it represents study, logic and the Tomorrow over Today. As the cold freezes and hardens anything, the concept of this element runs around analyzing situations and solidifying conclusions through impartial logic. Frost opposes Fire - while one calculates the possibilities of Tomorrow, the other enjoys the delights of Today. For an individual without Frost, the consequences of a life without planning can prove to be overwhelming. For one who is cold to the extreme, many experiences and opportunities will be lost as they turn their eyes away from the present.

To an adept of Frost everything has a reason, an explanation, and knowing those things is their ultimate objective. For that, Frost adepts are often calculating, observant, curious, and collect themselves to their own thoughts.

The manipulation of the Frost element consists in knowing all things and making solid strategies. For that, its martial and magical styles always revolve around cold study and calculated actions. But in order to the plan to succeed, they need to mitigate the odds of failure, that is, hamper their opponents' ability to counter-attack. Frost adepts are specialized in hindering opponents, be that through physical or magical ways.

Among Frost spells, there are the basic manipulation of cold and the freezing of the water in the environment. More powerful adepts can create impenetrable ice barriers and slow or even kill their enemies with unbearable cold.

The concept of Reason gives this type of magic a defensive style, as expected from an Order-type element. An adept of Frost is always collected, observing and studying the enemy. If a face-off is inevitable, they will have the necessary information to win.

Frost and Fire are opposite elements, which means they clash with equal strength, canceling each other out. Reason may hinder emotions, much like emotions may cloud reason, but true balance lies in the realization that good reasoning and understanding can help control one's emotions, just as one's emotions may drive the search for knowledge. In battle, an adept of Frost brings hindering strategies, which often match the uncontrollable fiery mayhem of a Fire adept.

Dark, the element of Death, Fear, and Truths strengthens Frost much as it does to the other Order elements. It breaks the weaknesses of the element by providing the hard facts to drive research and curiosity, just as it magnifies its strengths by presenting the fear of what might happen to someone who doesn't try to find solutions to their problems. Dark magic helps Frost adepts by weakening and demoralizing their enemies, proving to them that the obstacles of cold death are too much to overcome. Light, on the other hand, is the element of Life, Courage, and Lies, working against the nature of Frost, making logic and curiosity comfortable with their reality and ceasing to exist in false bliss. Light magic melts the purpose of Frost, which is the main strength of its adepts.

Earth and Water walk side-by-side with Frost. Tradition and Acceptance work together with Reason to understand the world and find ways to protect it from its doom. As the driving source of Frost, Water is easily molded by the cold. An adept of Water uses the opponents' strengths against themselves, which has little to no effect against an adept of Frost who can hinder their movement. Yet, Frost stands no chance against the steadfastness of Earth that feeds on its reasoning, as an adept of Earth can easily break through the defenses of Frost and shrug off the hindering cold.

On the side of the elements of Chaos, Frost is put down by the stubborn nature of Thunder, whose adepts can easily thwart Frost's strategies and face them head on; but Frost can simply bring down the care-free nature of Wind, just as an adept of Wind can hardly endure the constant hinderance a Frost adept can put up.

If fed with Light, Frost's natural response is to weaken in time. Prolonged exposition to it causes Frost to lose its link to the aether and meltdown, becoming more vulnerable to other elements that prey on it until it eventually ceases to exist. Once this happens, it is said the element goes "void", it leaves the person without any thirst for knowledge. This process must always be avoided, as the Void is a dangerous thing. 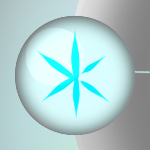