Statues in honor to the heroes of the land, circling an eternal flame


"This is where the greatest of us rest. They say their souls still inhabit these monuments, that's why we pray to them."
— Wylde Arbjorn


The Hrastfolk had a very different culture if compared to the rest of the Archani, but as they grew together, most of their cultures mixed and merged. Maybe the greatest symbol of that is the Circle of Heroes, an ever-expanding set of statues surrounding an undying flame, in honor of those who, in any way, helped Archana move forward and stand strong.

As part of the Pact of the Oaklands, the Circle of Heroes was built as a symbol to the peace and unity of Hrastgar and Nouvemond, a monument to represent the greatest individuals of both. Since then, these statues have earned a more spiritual purpose, as representations of the Heroes-become-saints in the Archani's religion, to which they pray to ask for protection.

The Circle of Heroes was built with the vision that new statues would be added every once in a while, and so it was done. Since its construction, many statues have been added to the Circle.

The Circle of Heroes stands in front of the Oaken Hall. It can be divided into two parts: the undying flame in the center and the circle of statues around it.

The statues are arranged in a C shape, a circle with an opening towards the Oaken Hall. Each statue carries a plaque with the name and accomplishments of the represented person and is carved in a minimalistic style, showing the most defining features of each historical figure. The images are 1.5 times the height of each figure, and adding the supporting base with the plaque, the statues are around 3 meters high each.

These statues also often serve as graves. When the hero represented by the statue dies, they are cremated and their ashes put into an urn, which goes inside the hollow in the base of the statue. There are a few whose remains didn't meet this destiny, such as Lady Amice Lionhart, who's been buried behind the Springdrop Sanctuary's waterfall.

A great pyre-sized fire pit in the heart of Hrastgar, the Undying Flame, as the name suggests, is a magical fire that never goes extinct. The reason behind that is unknown, as the first leader of the Hrastfolk, who started the flame, claimed it was the will of their ancestors who died during The Calamity. For the Hrastfolk, it represents the unfaltering spirits, unwavering courage and unbreakable will of themselves and their forefathers.

Back in the early years of Archana, when there was only Nouvemond as a city-state, people from the northern parts of the continent arrived in the land and settled down. The presence of Hrastgar, as the settlement was called, made more than a few of the leaders of Nouvemond upset, fearing these "barbarians" would come to be a harm to their people.

A war broke out between both settlements, eventually. Under the ruse that the Hrastfolk were ambushing and killing their travelers and scouts, Nouvemond advanced towards Hrastgar to conquer them and expand their territory. This war lasted much longer than it should, enough to one day a diplomatic group shed light on the true motivations behind it. The schemer behind the war ended up dead, and with that, both peoples proceeded to end this war with a treaty of peace. As part of Pact of the Oaklands, Nouvemond gifted Hrastgar stone from Vilennor, so they could build a monument to peace. As it was the Hrastfolk's culture to honor and pray to their ancestors, it was just fitting that they would use that stone to build the Circle of Heroes to honor the most important people from both Hrastgar and Nouvemond, as a symbol of their conjoining cultures.

The Hrastfolk have always had great respect for their ancestors, and this was only accentuated by the Circle of Heroes. Believing their souls still inhabited their remains and the statues containing them, the Hrastfolk created the habit of praying to these heroes, much like saints. This evolved into their customs, and now it is common to pray to a specific hero asking for their favor or just to pay respects.

Restless discoverer of The Veins, which brought wealth to the kingdom.
— Writings on the plaque under the statue to The Pathfinder

Raymond Vilennor was the discoverer of The Veins, and died shortly after the expedition. Thanks to his heroism, the city of Vilennor was built and the kingdom was able to take advantage of all the wealth the mines provided, guaranteeing the prosperity of the land. Prayers to the Pathfinder often revolve around good luck during travels and journeys, that no harm may come to those who seek his protection, and that they may stumble upon good findings.

Founder of Hrastgar, bravely resisted with her people during the unjust war against Nouvemond.
— Writings on the plaque under the statue to The Warmatron

Hailing from the northern lands of Europa, Hilde guided her people away from the cold and to the Archan Heartland, founding the settlement of Hrastgar. Through the next few decades, her bravery and determination inspired her people to resist the attacks from Nouvemond that sought to take away their lands. Warriors pray to Hilde asking to lend her ferocity and cunning in battle, so they can outwit and out brawl the enemy.

Founder of the Traveling Notes, exposed the unjust war and brought peace to the Nation.
— Writings on the plaque under the statue to The Peacesinger

The War of the Oaklands started under a false accusation against the hrastfolk. Baard Nordrum, the grandson of Hilde Nordrum, decided to act and spread the word of such falsity through his songs, eventually winning the people of Nouvemond's support and exposing the corrupt commander behind the war. Bards have the Peacesinger as their patron, following his steps and carrying his legacy.

Master blacksmith of the Guild, discovered the magical forging techniques.
— Writings on the plaque under the statue to The Spellsmith

Considered the "mother of the Craftsmen Guild" although she was far from founding it, Kendra was an amazing blacksmith. Her dedication to her craft was beyond anything the other smiths could achieve, and that quickly earned her the spot as the best the guild had to offer, maybe even to this day. But what made her mark in history was the discovery of a technique used to craft items with basic magical properties. Kendra's blessing is sought mostly by the Guild's dwarves and anyone in love to their work, as they believe she may grant them the skill and dedication to improving beyond what they normally could. 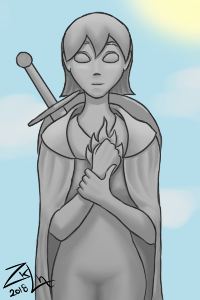 Moved by the struggles of the people, formed the Resistance against the Artalgnian Empire, bringing independence to the kingdom.
— Writings on the plaque under the statue to The Lionheart

Leader of the Resistance that liberated Archana from Artalgne, Lady Lionhart was a bastion for all that the Archani stood for. Unwavering will and unbreakable courage were her defining traits. Although it is known she was buried at Springdrop and not inside the statue, people still often go to her monument to pray to her, as it has become a custom with the other ones. They often pray to her asking for strength to withstand hardships and face impossible odds, to lend them her resolve and dedication.

Designed the Diamond Walls, the bastion of hope that no enemy could ever breach.
— Writings on the plaque under the statue to The Stonemason

One of the first to be considered a dwarf and often seen as a symbol of their virtues, Cyrus was the mastermind behind the design of Fort Edgemourn's reconstruction. He studied countless books of the old world, translating all by himself to learn some of the old techniques of engineering. With a vast knowledge of military strategy and engineering, he devised the Diamond Walls. Prayers to Cyrus ask for the ability of comprehension, that one might find the path to grasp wholly the subject they study.

First King of Archana, united the land without shedding a single drop of blood.
— Writings on the plaque under the statue to The Forefather

The first King of Archana, Charles was able to achieve many great deeds of diplomacy and leadership. He was able to unite every city nearby to firmly establish the Kingdom of Archana and created various treaties and organizations to help the land defend itself from a number of threats. His blessing is sought to help people find common ground and work together despite their differences.

For proving the Kingdom with the knowledge and guidance towards its prosperity.
— Writings on the plaque under the statue to The Truthseeker

Praised as the most powerful of the Heroes, the Truthseeker is a faceless helper, an entity that appeared many times through Archana's history to give guidance to the people. They were involved in many of the most important events in the kingdom, and the unexplainable always seems to accompany them. Prayers to the Truthseeker ask for enlightenment and guidance, a cry for help to see the right path one must follow. 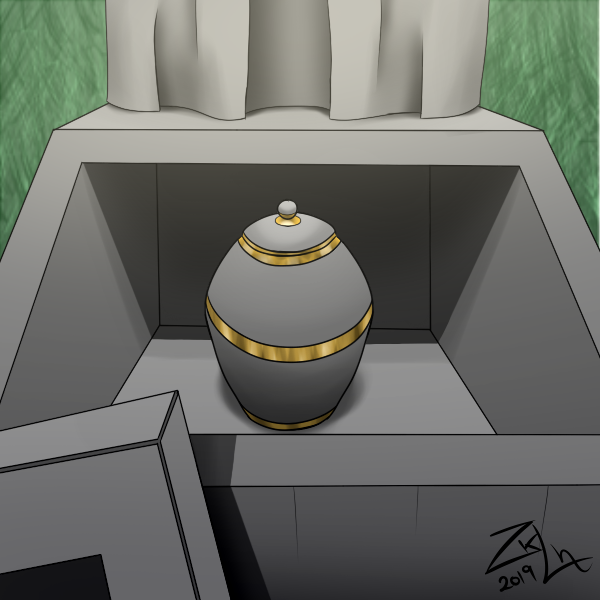 One of the burial urns kept inside the statues

Outstanding individuals who aided the Kingdom of Archana

The City of Heroes, standing in the center of Archana


Remove these ads. Join the Worldbuilders Guild
Landmarks in Archana