The Origin of Creation was a subtropical shrubland with shallow, to almost non-existent fertile soil. It was a region of sparse and extreme vegetation, and rich in resources such as iron, copper, tin, mana crystal ore, and elemental gems such as Earth Crystal. The region surrounded the Arc of the Covenant, and took up the entirety of God's Summit in the center of the Island of Creation.   Despite the world being made for them, this region was particularly harsh and stark in contrast to the more fertile lands below. It was rocky, slippery, and couldn't sustain enough plant life to allow vabuians to subsist off of. Because of the high precipitation, the ground got somewhat waterlogged and difficult to traverse at times. The inner soil region with its slightly deeper, less clay-y composition made it easier to build upon. The wet climate and the permeability of the dominant stones allow for shallow aquifers to exist, making access to drinking water easy, as well as the existence of small cricks flowing from lower elevations to join in tribute to the prominent source spring's river.   While a sizable physical remnant of this biome exists in Puretopia, this biome along with all the others are considered extinct because of the consumption of the entire mountain and island in the Purester Unity's hunger for resources. This was despite the fact the region was considered sacred to the The First Peoples as well as vabuians in general.

The Ancient Chaoxin name for the region started as Hyh'bu, which meant Our Land, and was the choice of the name of the place throughout the reign of the Sters. Later, the rigion was renamed to Corebu'quasbu, which meant Center of Everywhere, the Everywhere part of the name carrying a specifically divine connotation. This rename was part of a larger movement that resulted from the Purester Reformation.

The Origin of Creation was characterized in three segments whose differences were predominately because of the soil depth and content. These segments were the central origin, the inner origin, and the outer origin. Between all the three regions, several similarities could be drawn. For starters, the area is enriched by large amounts of in-flowing mana from the nearby leyline, centering around the Arc of the Covenant and receding into the ground towards the core of the world. While the soil was plenty fine in its richness, and the region plenty wet, its soil depth disallowed for a biome more akin to a grassland to take hold. Large segments of the soil were created by genisis pillbugs, and thusly had a faint cerulian sparkle of tiny fragments of mana crystal throughout.   The boulders and fieldstones tended to be made of brownstone or mudstone, often enriched with iron. Large sections of rock were made entirely out of Ironstone, and in the cores of ironstone deposits in the boulders were opals. Large outcroppings of pyrite and marcasite existed jetting out of bedrock and (more commonly) off fieldstones and boulders, Other iron-based deposits in the area included redstone and hematite. The region was particularly rich in other ores too, such as cassiterite, chalcopyrite, cinnabar, realgar, galena, as well as pre-forged bands of metal such as Iron Forgeore, Tin Forgeore, and Copper Forgeore.

The center of the summit was flat and clear, the soil clear of fieldstones from having been scattered down the slope and towards the edge of the biome. It is a distinct solid core of stoney alfisol soil in contrast to the other regions. There are patches of a special sterile red clay that spoted the surface, known as Primordial Clay. This clay is distinctly abscent of all life and that are said to be the places where vabuians were first moulded from by the gods. This clay is sacred even in modern times and is used by Purester-based churches in baptismal ceremonies. Because of the soil type, Puregrass is the most dominant grass type, allowing for an unusually grassland-like appearance to the summit.

The inner Origin is a rockly sloped region heading down the mountain, here boulders and outcroppings dotted the landscape with thorny and extreme species of plants and animals making up a large amount of the region's biodiversity. The region were dominated by clay-rich ultisol soils, and the rocks in this region were laced with veins of mana crystallization, which gave them striking glittering and glowing cerulean patterns contrasting their mundane stoney surfaces. Grasses in this region include Pruegrass, Bladegrass, and Mountain Moss.

The Outer Origin was a transitional region where the incline of the region gradually decreased and the soil depth increased dramatically. The soil type also transitioned to mollisol and became more hospitable to a larger variety of life. Small trees dotted the region as the landscape transitioned into a woodland. This area was populated by a large amount of boulders that have made their way down, some having made it further down and into the forest beyond.

The Origin of Creation was an critical and pivital part of early Sterian life. The summit was sacred, and the region full of resources of which the early Magnavoxia used to great effect. People would climb the mountanous region to see the Covenant, often to gather to watch the Lights of the New Year at its peak. Its abundance of Iron, Copper, and Tin was an early boom to their metalurgy industry. Purple Mercury Crawlers produced the berries that would be used in purple dyes found throughout the state, and the Painted Bushes would produce all the other colors necessary for the rainbow-aethstetic the dominant Unitarian faith bore at the time.   As time progressed, the region became less divine and more utilitarian as other resources such as Pyrite and Mana Crystal were pulled from the stones. Slowly, the land was utalized, and the goddess Varia did her best to keep up with the vabuians. However, as technology rapidly progressed and people's respect for the land faded, they began to outpace the Geohealing and eventually created a giant scar of which the great city of Puretopia sits in today. While parts of the land were perserved in either museums or in the sole-surviving habitat surrounding the Arc of the Covenant, the region is effectively gone, destroyed by materalistic hunger. 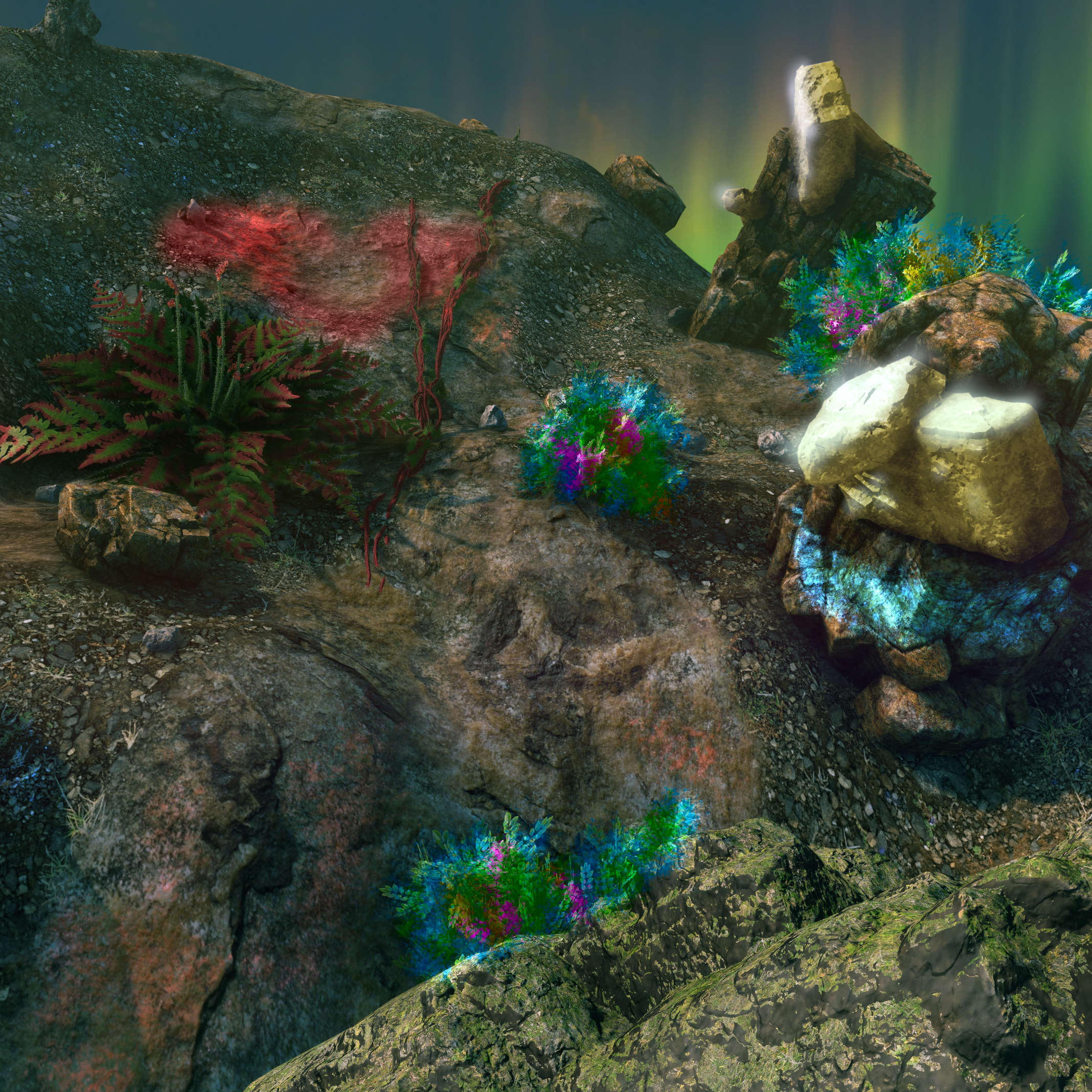