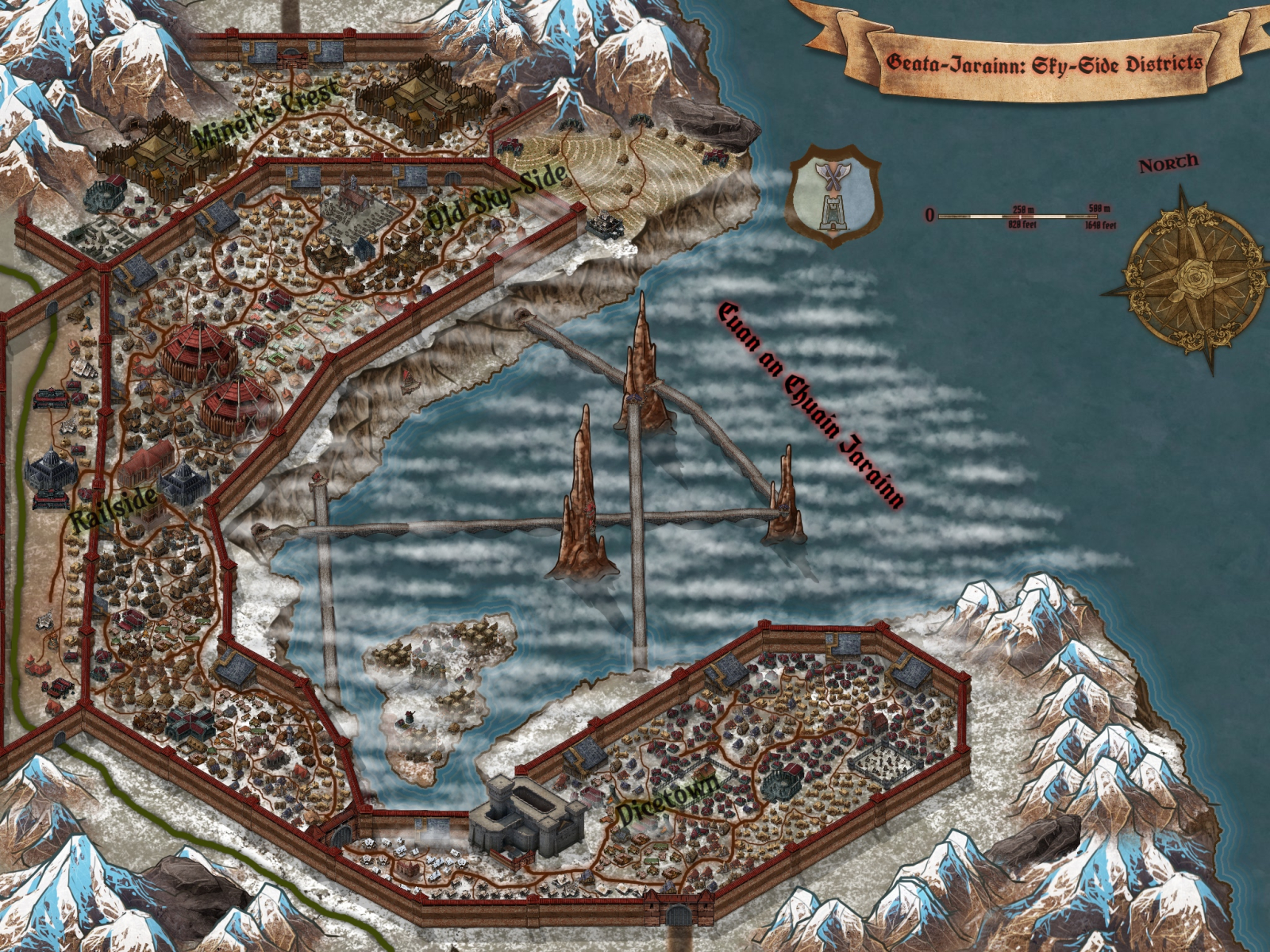 "Far to the north on the continent of Durol, across the tundra, and deep within the Irontip Mountains, sits the bastion of the Suranthi nation. The seat of power of the Conclave of the Clans, from where the High King and his Council rule the nation of the Tundra Realms. Geata-Iarainn, the Great Iron Gates. The city stands amid an area many would consider inhospitable, perched atop a sheer cliff overlooking a bay of sorts. This narrow bay, towering up through the mist from it are three great pillars of stone, stalagmites that pierce up from the ocean floor and into the sky some few hundred feet. The entire shelf, down to the water, is almost a half mile deep, the little cove near constantly under a thick mist of sea spray, the ocean air mingling with smoke and steam. For though one might think such a place, such treacherous terrain and such a perch dangerous or implausible, the marvels of Geata-Iarainn make the implausible quite possible. She is an imposing sight to behold, with her massive walls, almost some seventy feet tall, solid stone with iron reinforcements, and a sharply angled steel base from the ground extending up twenty-five feet. These strong defenses are enhanced by a deadly offense, the city having obvious artillery batteries atop and within every watch tower. Geata-Iarainn is actually a busy and bustling metropolis, a city of resource, trade, and business. Her mines are rich, the cliffs below and further inland full of ore and veins of other valuable minerals.

Show spoiler
Recently, the Suranthi people suffered a foreseen, but tragic loss. High King Cormac Ironcliffe, the last living leader of from the era of Reclamation, he who led the reclamation wars into the Tundra Realms, and managed to resettle his peoples, has died at the ripe old age of 641 years old. Tuberculosis. Though a people mourn, they also remember and celebrate the life of this great dwarven leader, the first High King of Suranth after its reforging. The city prepares for a week long celebration to start in but two days. Every evening free meal and drink at every tavern, eatery and inn in the city for all whom wish it, paid for by the nation's treasury and by the Cult of Sir Kartheart. All the Lord and Lady Protectorates are on their way to the city to partake in the celebration of Cormac's life, and then to take part in the first Council of Crowns to elect the next High King or Queen of Suranth. This is the timeline and setting of the Fortunes of Fjordhelm Campaign I am working on, Player Characters arrive in Geata-Iarainn the day before this celebration of rememberance is set to begin.

Geata-Iarainn's population is counted by the standards of the day, which ignores any children (for humans that age is 14, apply simple lifespan conversion for other races based on life span to see where that line is for them), nor are beggars or other non tax paying elements counted, either. The capital is a melting pot of sorts and as such, there is a notable racial diversity, though Dwarves and Humans still make up a notable majority, and amongst the humans, those with dominant Koltani heritage are the most numerous, with Mogols making up the least, as can be seen below;

Geata-Iarainn is a strong city economically, and has a pretty good income spread all things considered. A strong and numerous middle class, which helps with a strong and consistent economic flow within the city. Below a simple graph of tax brackets by population percentage within the city as of the previous years tax records. 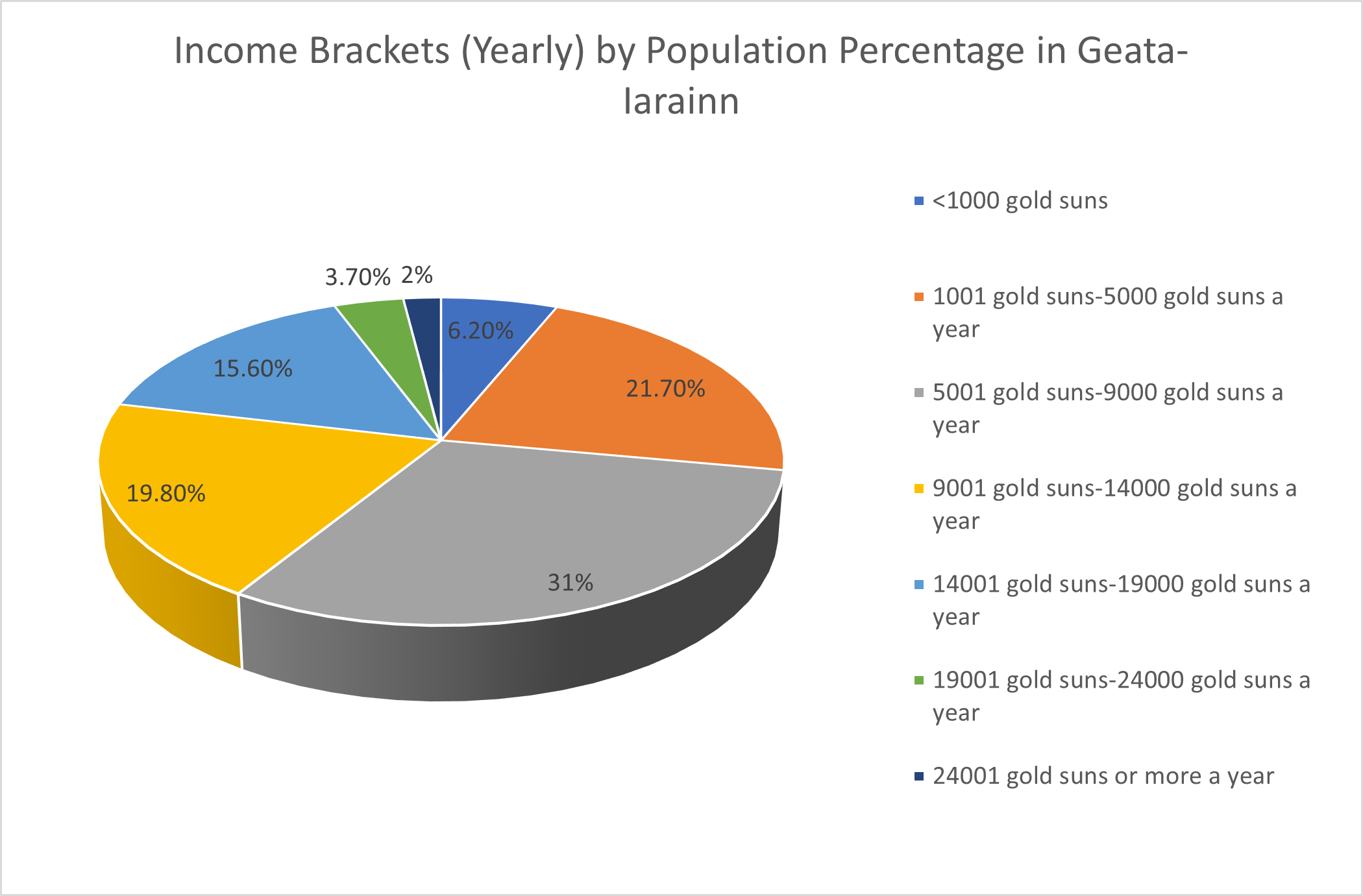 The economy of the city is driven by resource management. It is a major transit hub for minerals, ores, stone and more that can be mined locally, and through the rail systems, distributes much of that cargo throughout Suranth, and beyond. They also have a busy port and a Sky-Dock moving goods, cargo, raw materials and people. A strong manufacturing sector utilizes many raw resources mined in and around the city, as well as other raw materials, and finished goods are shipped out. Below is a rough but readily available pie graph of the employment by sector within the city, a year out of date, but readily available to any whom would wish to visit city records and request to view such dry papers and reports; 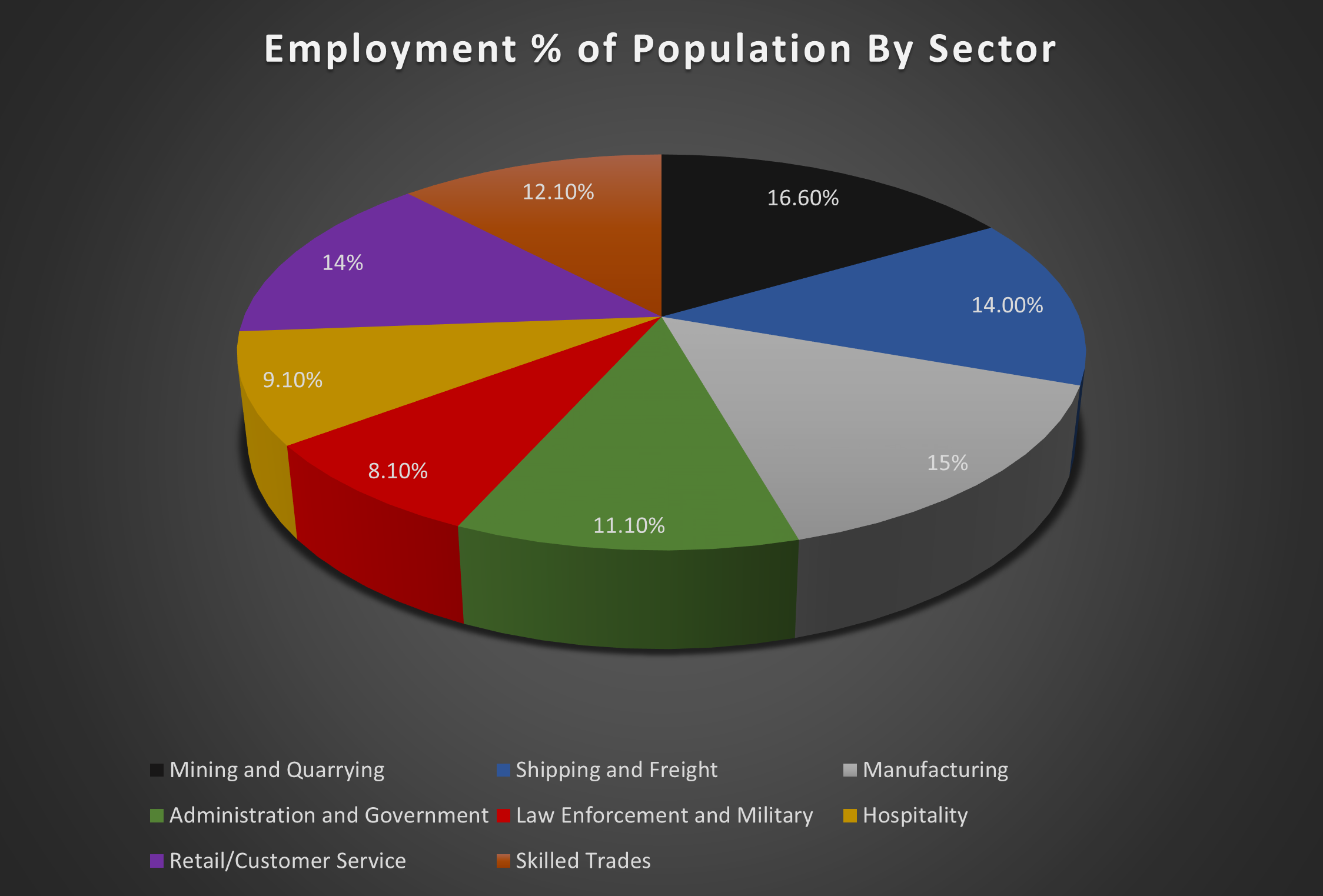 Geata-Iarainn is the seat of power for the government of Suranth in its entiriety. The High King or Queen holds two votes within the governing council for the nation, known as the Clan Consolate. This council is made up of 27 other individuals, all elected officials from the various large cities, which mark what were small ancestral small clanholds, that now make up the nation. Besides the national government, the city has its own governing body, a city council of 15 individuals, 12 of whom are elected officials, whom can only serve one term. These positions are up for election every ten years. The other three are;


The other 12 positions are elected from the various regions of the city every five years, with but a single term as a hard and fast limit. Anyone whom can prove they paid taxes and had steady work in the city over the previous five years may run for office.

Geata-Iarainn is divided into three tiers, known as 'Quarters' which of course will frustrate the mathematically minded, as if there are only three of them, than that implies the city is only 3 quarters, and not a whole. Regardless, these are the Sky-Side Quarters, the Cavern Quarters, and the Dockland Quarters. However these are merely geographical distinctions recognized more for things like postal and delivery services. The sorts of divisions one would be thinking to find, the formal and informal sub-divisions lie in the twelve areas called 'Cori-clanns' or 'Clan-homes' in common parlence, that make up the different voting zones, based on where one lives, for the city council. These are marked on the city map, and are by no means do they split the potential voters within the city equally amongst them perfectly evenly, though one can tell a concentrated effort to insure some level of balance, within acceptable limits, was maintained.

Dicetown: This district gets its name for many reasons, not the least of which is the heavy presence of 'tourist traps' that run here, throughout inns, taverns and even in the streets and markets. Despite that it is worthwhile to visit, just those whom are not native to Geata-Iarainn and the nation of Suranth herself are advised to keep their wits about them. This district is also one of heavy traffic, as this is where the Cliff Crawler Lifts are, to connect with and move large volumes of goods and people up and down between the city's three layers.
Railside: This busy district is named simply for the Geata Railyards. It is a place of business, administration and lots of traffic of goods and material. It also is another place with notable tourist appeal in the city given the presence of the Ironborn Coliseum and its sister building the Irontip Ampitheatre. Places of culture and entertainment, the Coliseum also the home field of the Geata Guardians, the city's professional Caid team, current defending champions of the Durol Continental Cup.
Old Sky-Side: This district gets its name because, besides the Sky-Port, it is the one of the oldest District in the Sky-Side Quarters, its winding streets, avenues and alleyways a tangled mess as one might expect.
Miner's Crest: This district gets its name because for the business interests that operate out of here and the fact that many of the workers whom work the city's mines call this district home

Castellon Heights: This small district is a riding on the council and gets to vote in a sea, in addition to also being where the governmental matters of city and nation are centered. For it includes the homestead of the High King or Queen and the other ranking officials of the city, such as the Archmagister and the head of Sir Kartheart's Faith amongst others.
Steeltown: This district is thusly named for housing much of Geata-Iarainn's metal refining ore production. Many are the artisans and craftsmen whom operate bigger business interests in their field whom run entire shops out of this district.
Gild-Town: This district houses most of the richer and more minor nobility and wealth of Geata-Iarainn. Successful business families, heads of guilds, that sort of thing. The more 'new money' sorts.

Geata-Iarainn stands as a bastion, a testament to the will of the Suranthi people, and a shining example of the power and capabilities of technology and skilled hands. Stone and steel bend the wild tundra cliffs to the will of the people, massive machines connect the city together over three vertical layers. Stone buildings, solid and thick, with steel frameworks meant to allow flexibility but strength, to insure even in the harshest winds the Tundra Realms can offer, those that might come blasting in from a Nor'westor, for the most part buildings should stand strong.

Geata-Iarainn is rather unique in its geography, for the city is built around, in the cliffs of, and along the shorelines of a small bay and crevasse. A rather unique combination of geographical features, usable shorelines, a natural port, the water in the small bay calm enough and deep enough to be a good port. But the shores would be worthless, however the high cliffs surrounding them are mineral and ore rich rock about halfway up, with a notably massive natural underground lake providing fresh and clean water to the city from the southern cliffs, many underground rivers and streams flowing through the glacial subterranean into this lake, before draining out to sea just outside city limits further south along the cliffs.

The three massive stone pillars protruding from the bay itself, another feature of interest, and are utilized, housing a variety of important locals within the city. Up Sky-Side, the land around this crevasse, this small bay, is that of a plateau, relatively flat, solid and stable, admist mountain ridges and faces. The city itself is exceedingly well fortified, but in many ways the walls and other defenses are but its second line of defense, the first being the very geography and the tremendous difficulties it will present any oppositional military force.

Answering: "Α settlement beside or in a great expanse"
Visit Twaren Stormborn's Competition Page Check all other answers to this prompt Competition Homepage

I love the details! Very nice article. I'm saving it to re read later.