Penny for Their Thoughts

The battle with the monstrous, froglike creatures raged on... or, rather, one of the two continued laughing hideously on the banks of The Wyrmtail River as the other lay quite dead. However, the battlefield changed swiftly as a red and an orange grung came leaping out of the water to join the fray.


Seeing quickly what was transpiring, the two approached the downed creature and combined efforts not only to revive him, but to heal him as well. Suddenly the party found themselves in a very different conflict than they were facing moments before. However, the potent combination of Johann's impressive swordwork, Murmus' floating hammers, and a truly vibrant rainbow of death from Faewynn Treewalker, things started to look up once more as the already embattled frog monster went down again.


After Murmus and Johann were stunned by a vicious, trilling sound loosed by the red grung, the tide started to turn once more. However, the party would rather suddenly find themselves in the company of yet another surprise entrant to the fray. Vornaar, a brass dragonborn, arrived on the scene with a booming shout. Perhaps noticing all the blood and hammers, however, he instead chose to summon eight wolves to take this one for the team.


Somehow managing to convince Murmus Bigtoe that these wolves did not mean him harm, the wolves were able to pentrate the wall of hammers and take a series of vicious bites out of the grung--one of whom was literally on fire after a searing smite from Grihymm Phrahdrandon. Neither the red nor the orange survived this onslaught.


As the red grung fell, the surviving abomination seemed to gain a semblance of clarity. Noticing that the battle was clearly not going to end well for him, he elected to make a dash for the river. The party allowed him to escape, but to where they do not know.

As the dust settled on the battlefield, the party turned their attentions to the druid still standing bfore them. Perhaps in an effort to reaffirm his good intentions, Vornaar instructed his wolves to ingratiate themselves to the party. Each of the summoned creatures approached a member of the party and laid submissively (and adorably) at their feet. Murmus gave such profoundly wonderful scritches to the wolf nearest him that Vornaar became worried whether the creature hadn't found a new master.

Perhaps noting this apparent good will, Johann offered the stranger a seat--an invitation which the druid graciously accepted. Casting his Summon Seat spell, Johann conjured a comfortable-looking chair out of the aether. It arrived complete with plush cushion, made ostensibly of the same magical air that comprised the rest of the seat. Vornaar was eager to take a load off, but his ass informed his brain moments later that neither of them should trust magical seats in the future. Getting up off the ground, mildly disappointed but more confused than anything, Johann laughed and continued the strange (and getting stranger) introductions.


Revealing that he had been living in the swamp for some time, the druid explained that the grung had previously kept more or less to themselves. However, in recent months, he shared that these much more monstrous creatures had appeared, and had wreaked havoc throughout this swamp. Once he discovered this havoc including the wanton slaying of animals, Vornaar was convinved these things needed to die. Grateful for the help and opportunity to bring even one of them down, the druid became curious about the party themselves.


Investigating the corpses remaining on the field, Johann located a pouch containing three small diamonds on the red grung. Remembering Marin's words of caution, he was very careful to avoid touching the poison-soaked skin of the grung. He did, however, decide to coat his rapier in the substance covering this grung's skin.


Investigating the orange grung, Johann found another fragile glass orb containing a kind of glowing red liquid. Having seen the grung smash one of these on himself and his monstrous ally, the party divined that it was likely a form of healing potion. Murmus smashed this orb on his arm and found that this was indeed its proper usage.


With help from Grihymm, Murmus carried the two grung corpses into the river and watched as they began to float lazily downstream. They attempted to do the same with the corpse of the monstrous frog, but he sank instead. Murmus used Thaumaturgy to shake the muddy banks of the river enough to submerge the creature entirely. When he was done, nothing was visible of the so-called abomination.


During this exercise, Johann had been preparing a ritual which turned out to be Animal Messenger. Locating a bird in a nearby tree, he gave them a message to deliver to the "gold frog in the rocks to the east." The message was, quite succinctly: "Do not try to attack us again. You will regret it." The bird flew off in a beeline for Riverrock, and seemed to be making pretty good time on the way.


A Cottage in the Swamp

Vornaar offered to lead The Party back to his cottage to sit (on real chairs), where they could discuss all the things that were understandably on each other's minds. The party agreed, trusting this stranger enough to follow him once he assured that there were totally no traps involved. They were additionally pleased that the travel would last minutes instead of hours or days for once. They were also relieved to hear that the horrors of the Fellgleam night rarely visited the swamp.


With Murmus and Grihymm carrying their boat, the group made their way deeper into the swamp until they reached a humble cottage, apparently built for one out of wood from trees in the swamp. Once Vornaar made a show of indicating the lack of traps in his doorway, the group followed him into the druid's quaint (but serviceable) home. 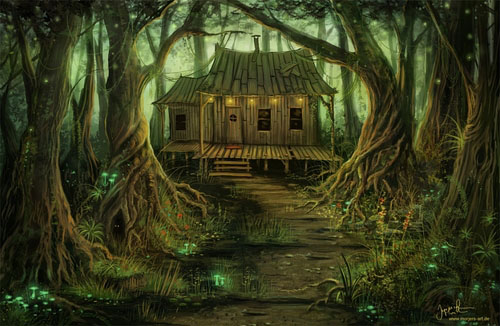 The party began relaying their story only to reach a familiar obstacle. Still very much afflicted by The Curse of Crossbones, Johann found himself apparently talking about his favorite bread, and the means by which it could be made. Murmus seemed less troubled by the curse, however, having been granted a free opportunity to speak at length about himself and his story. The curse did not impede his efforts in this whatsoever.


Vornaar was going slackjawed by the time Johann produced an interesting coin, buried in his pockets for enough time that even the gods probably forgot about it. This Crossbones Doubloon, he knew, would allow this stranger to understand them. Vornaar--like Lilli Longshadow before him--seemed uninterested in placing a coin in his mouth, however.


Faewynn Treewalker, growing weary of the entire proceedings, politely asked Johann for the coin, which he handed to her. She very calmly approached Vornaar and, with a sleight of hand that was quicker than Vornaar's reaction speed, deftly maneuvered the coin into the dragonborn's mouth. Vornaar was understandably shocked and angered by the ostensibly insane thing that had just occurred. As he attempted to spit the coin out, he found that it had somehow fused to his tongue, where it lingered for a brief moment before apparently melting into it like a Listerene breath strip made of copper.


He found a moment later that Johann's story about bread was somehow... still going on. "Shut up about bread already," he had time to think, before Johann decided to switch topics back to Crossbones. Now able to explain their story for the first time to an outsider, Johann became ecstatic and attempted to regale the druid with the most magnificent tale he had ever told. He got so excited, though, that he tripped over most of his words and probably left a lot of important details out.


Nevertheless, Vornaar eventually learned the party's story in full--or near enough to develop a reasonable curiosity about their affairs. The druid told them all he could of Witchmill and his travels there. With Murmus pleased to hear of the blacksmith and Johann excited about the prospect of airships--and combined with learning that it would take months to reach Highscale on foot--the party agreed that Witchmill should be their next destination. Vornaar began to gather his supplies as he agreed to lead them into the town, and Faewynn was just glad to be done with the whole conversation.

Three, roughly eight-carat diamonds worth about 300GP in total