Defleshers are living nightmares. They are demons that successfully migrated from Hell to Aardheim and are only here to feed on mortals’ souls and emotions.

How to best describe it... Well. Imagine you’re in a dream. In that dream, you’re the prey and something is hunting you. You are chased. That something that is chasing you, well it’s Death… You know that if you stop, you’re dead. You know that if you fight, you’re dead. So you run, you run and you run. And you pray. You pray that your way will not be a dead end. Because if so… Well. You’re dead.
— Dahalar Letoh, demonologist of the Bangkorian School of Witchcraft

The defleshers are amorphous ectoplasms made of a dark mist. They can freely change shape but there are three rules limiting the shape they can take.
First, the mist they generate seems to have a finite amount. Second, they can only take a shape that uses all the dark mist they possess. Third, that mist can’t separate itself on its own will. As a result, defleshers can’t separate themselves into multiples beings. If you see multiple dark mists, it means there are multiple demons...
Even if they can assume any form, they are mainly found shaped like beasts or humanoids.
It is rumored that the deflesher can feel what scares its prey the most and will morph into it. You might encounter your worst nightmare if you ever meet one…
Apart from the black mist, there is nothing that can be described about a deflesher, no physical form or appearance, no face, nothing to distinguish one individual from another…

No eye, ear, nose or mouth. Defleshers do not use the conventional sensory organs to navigate our world.
To freely move around, they use their magic perception which allow them to feel objects and beings. Their range of detection is equivalent to that of an Archmage, allowing them to detect prey in a very large radius.
They also detect emotions which allows them to react instantaneously to killing intent, fear or pain. Finally they can perceive souls and tend to be attracted by innocence, virtue and purity.
Defleshers are extremely sensitive to sunlight. They will dissipate in the sun but it is unsure if it kills them or if they just temporary disappear until they can gather their dark mist again. This way of making a deflesher vanish only works with a strong and continuous emitted white light. A torch or a fireplace will do you no good. 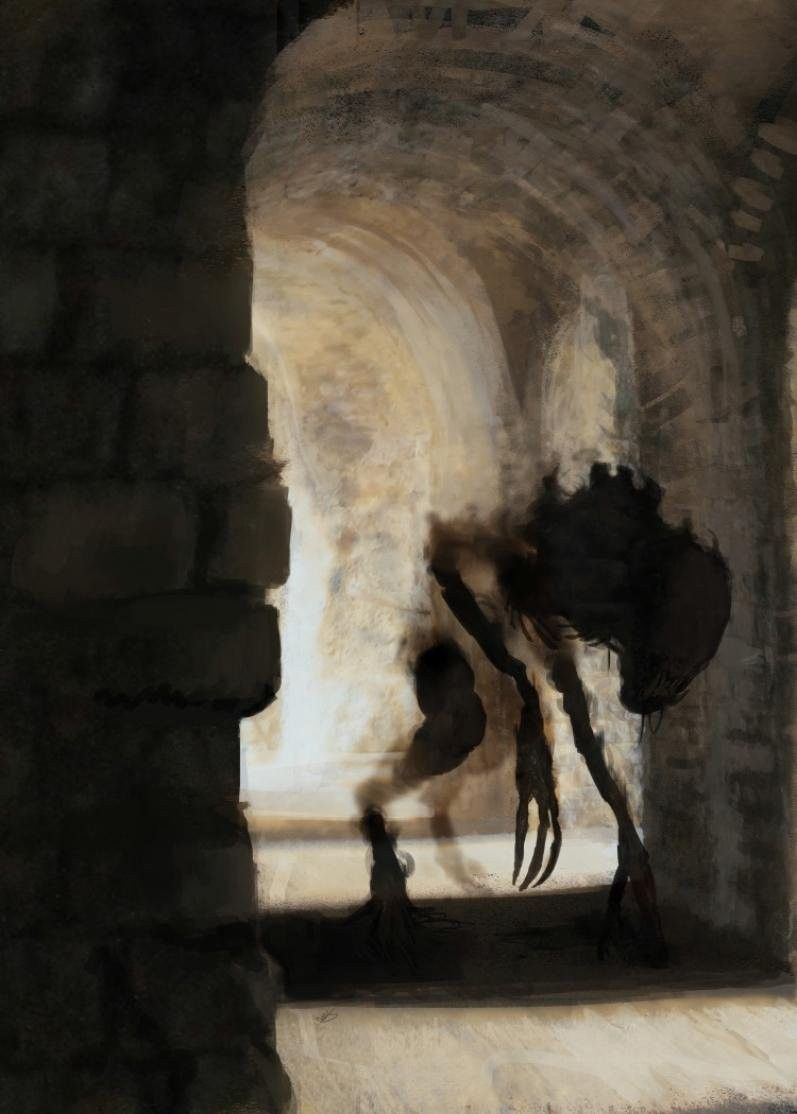 A deflesher dissipating under the sunlight

Fighting a Deflesher? Well, that’s bad idea. You got a death wish or something?... Ok, if you have to, be prepared because you are not gonna enjoy it. First, don’t go alone, you need a team. Four is a minimum. Then comes your prey, you need to find a loner. One deflesher is already hard enough, if you fight many you’ll be the prey and not the hunter. You get what I’m sayin'? Don’t rely on your weapons, they are useless. You’d better use a fan to spread the dark mist… Hahahahaha. Magic. That’s the way to kill it. Not talking ‘bout a fireball or anything that break bones or puncture flesh, no. You need some fancy psychic mage to mentally attack the demon. If you don’t have a mage powerful enough and mad enough to help you, don’t even think about it. Now, in the case you meet one. Something I only wish to my enemies. Don’t go near, don’t touch it, don’t let it touch you. If it does, you’re a goner for sure… But there is worse, it’s its scream. We call it the Holler. It’s a sound you will wish to forget once you’ve heard it. It’s a horrible sound from hell. A sad, depressive wail that will remind you that everything and everyone will die one day, and maybe, for you, today’s that day… Honestly, don’t fight that. Just flee. You will already be lucky enough if you make it alive.
— Zigird, soulhound for hire

Defleshers have multiple special abilities. Due to their mist form, they are evasion specialist and they will quickly disappear from your field of vision and resurface in your back. They also cannot be hurt with conventional weapons. Making direct eye contact with a deflesher will often cause one’s legs to freeze. This phenomenon is known as the Terror gaze. If the deflesher feel threatened or if it feels its prey might be escaping, it might use the Holler, a horrendous, blood-curdling telepathic scream that will tetanize anyone close enough. When in an encounter with a deflesher, what you need to avoid at any cost is to get into contact with the dark mist that composes its body. Upon touch, defleshers display extraordinary psychic abilities that will destroy one’s mind with unfathomable pain. They are experts tormentors and will make their prey feel the horrible pain of being stripped of their flesh in many, many different gruesome, tortuous and innovative ways. Their names come from this last ability they possess.

Mainly solitary, defleshers rarely stay together. However, due to their nature, they are often found lurking around the same lairs. It is very hard to understand this being from another dimension. What we know about them is that they feed on human souls and emotions. Their goal might not always be to kill their prey as sometimes they might be more interested in the fear they can extract than the soul they can collect. When hunting, defleshers can display weird behaviours. While they can move very fast, they have been observed moving very slowly toward their goal. Still unnoticed by their prey, they will often stalk their target, moving slowly, shortening the distance step by step. When noticed, they will either circle around their prey like sharks while shortening the distance or follow their prey and hunt it down. 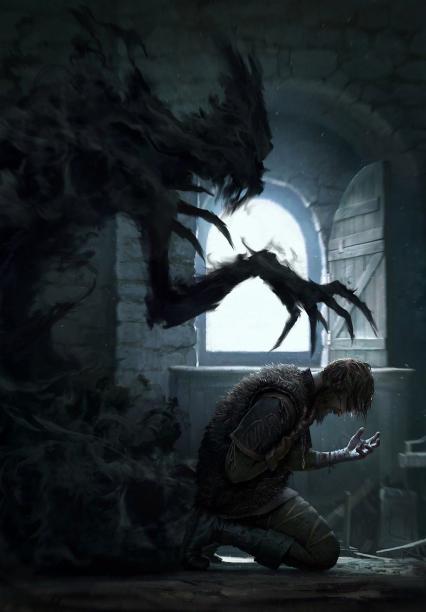 A deflesher stalking its prey and feeding on its emotions.

We were exploring some unearthed ruins when we encountered it. I felt it before I saw it. It was in my back, waiting for me to turn around... I didn’t. I ran like hell was behind me. Because it was.
— Rinderus Simetirian, archeologist of the Hagerstern Fulcrum University

They can be found everywhere, lurking in the shadows... Found in caves, ruins, dark forests and any place where sunlight is scarce. The defleshers are rarely seen or maybe they just kill all their witnesses. Like many rare creatures, adventurers are pretty ignorant about them. And when they encounter one, it is already too late. Mainly found wandering during the darkest nights, hiding in the thickest fogs or roaming ruins in the depths of the earth, they seem to dislike inhabited places and will prefer the silence of the dead. If a deflesher lair is close by, you will easily notice the signs. No living creature will be found in a very large radius, no bird, no beast, no insect. They particularly like areas where fog tends to form or when it is very often cloudy. A large and dark forest will also work.

Like all demons, they feed on the souls of mortals. More specific to the category of nightmarish demons, they also feed on emotions such as pain, terror, fear, fright and hopelessness. It has been noticed, that defleshers rarely hunt animals and seem focused on preying on sapient species. The most logical explanation to this is that emotions are more vivid for sapients beings and must be tastier to them.

Defleshers, like all demons, are beings from Hell. It is currently not possible to count how many of them exist as Hell is still an unexplored place. Scattered across Aardheim and having an unknown process of reproduction, it is uncertain how many of them are here. Luckily, encountering a deflesher seems pretty rare which must mean that they are not many out there.

Little is known about the defleshers as not many have encountered one and survived. They appeared after the great cataclysm and can be found across the world since then. There seems to be no logical behaviour behind their actions and they do not communicate with other species while it is believed that defleshers are sapient. The most probable hypothesis about their behaviour is that they have been trapped in our universe after the great cataclysm. Since then, they roam Aardheim without goal, feeding on mortals. 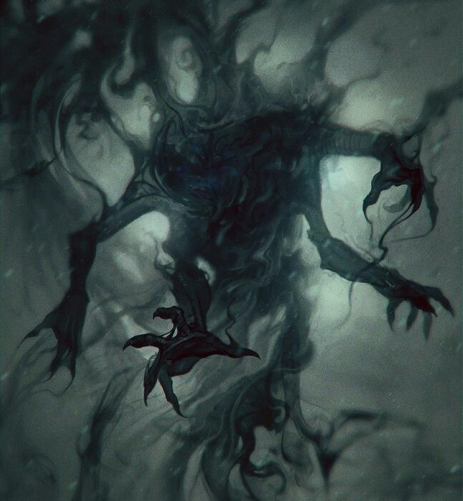