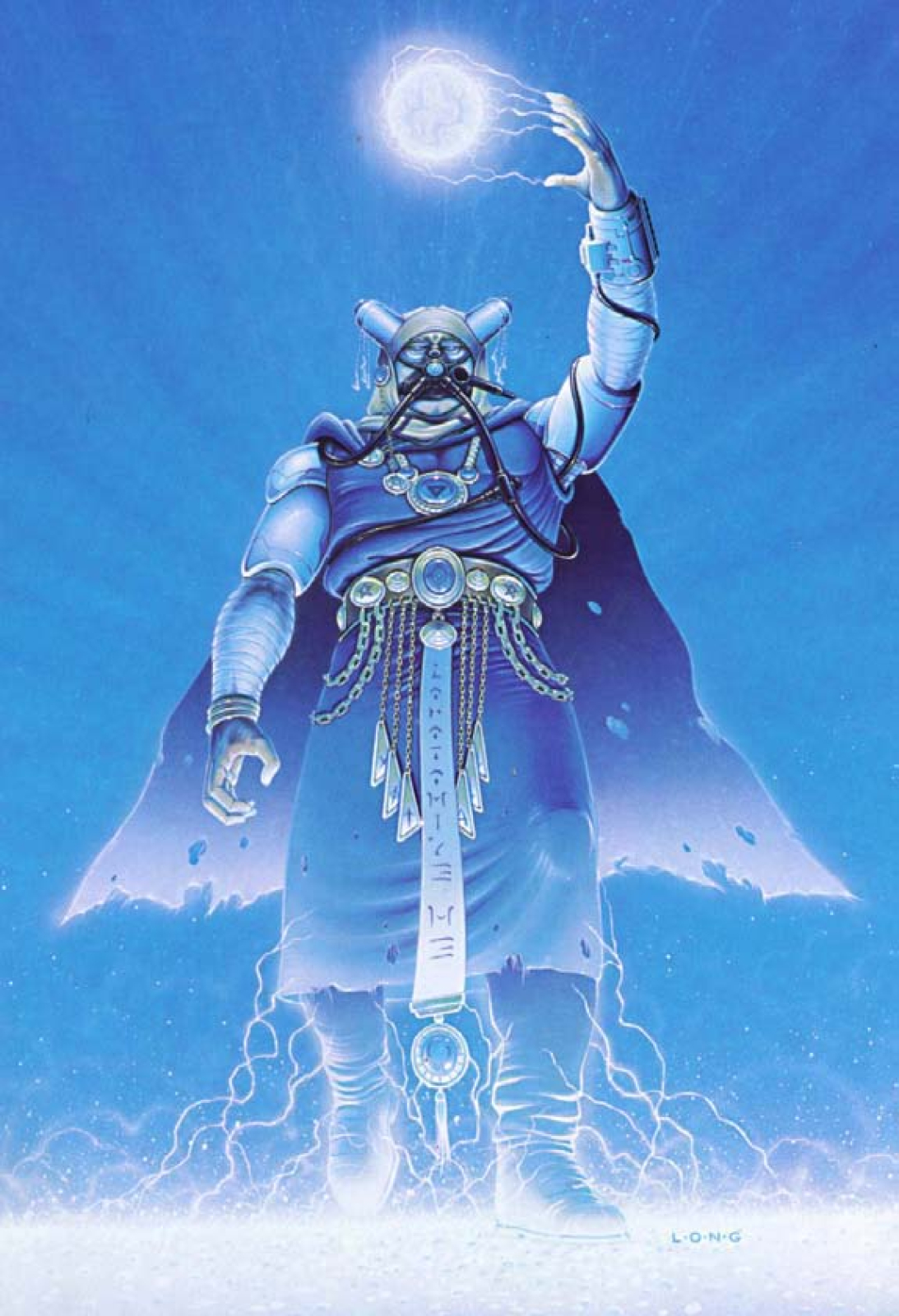 The crackling energy of life emits a pale blue glow as it surges across the landscape in rope-like rivers taller than a three story building. Some people can be seen floating along these rivers, these ley lines, bending the energy to their own purposes. We call these people Ley Line Walkers.

In pre-cataclysm Earth, there was a lot written about the possible existence of energy pathways in the body. And just like how ley lines produce nexus points where they come together on the planet, the body also has points where its pathways come together. These have been known through history as chakras. A more in-depth discussion of the Chakras of Ley Line Walkers can be found in the side bar on the right.   All humans have the ability to channel their energy through their chakras with enough discipline, dedication and practice. About 3% of humans also have the ability to channel ambient arcane energy through their chakras as well. This magical ability in humans is an ability that either exists or doesn't. It can not be learned or granted by any means other than being born with it. When such children reach puberty, they undergo a fundamental transformation. There is no outward physical sign of this transformation but they begin manifesting arcane abilities in response to instinct and emotion.   Without proper training, people with this arcane aptitude will go through life without the ability to accomplish anything truly powerful or useful with it. Some will become artists, some may be able to light up a room or rely on a few tricks they've been able to develop. But with mental discipline, dedication and training, these people can become the very epitome of a spellcaster, the Ley Line Walker.

The Evergreen University's College of Applied Magic located in Tolkeen has a school specifically dedicated to Ley Line Walkers. Outside of this, there are no formal standards for the education of Ley Line Walkers. One of the reasons for this is how personal the spells and abilities are for each 'Walker. New spells and abilities must be learned or gained through experimentation, research, or enlightenment.   The most capable 'Walkers are those who have a good grasp of their personal energy pathways and their chakras and how they can supplement this energy from the world around them. Some powers require the opening of certain chakras, with the most powerful requiring multiple chakras at once.

As masters of spell casting, few can equal the Ley Line Walker in pure magical ability. Most walkers have taken up combat-oriented occupations because they have the ability to defend against even supernatural threats, an ability sorely lacking outside the most technologically advanced communities. Even those seeking solitude must still be capable of self defense to survive this dangerous world.

The name "Ley Line Walker" was originally an epithet given to the humans who gained arcane abilities after the coming of the rifts. But as other races have come to live on the planet, they too have experienced the phenomenon of raising children with this ability. As the study of chakras spreads to non-humans, so to does the number of Ley Line Walkers.

There have always been humans with the ability to tap into the arcane. But since the accessible magical energy on Earth has been so minimal, and difficult to tap besides, it is unknown what percentage of the human population has ever exhibited the ability. Needless to say, the trait has been prevalent enough to survive in the race until the coming of the rifts when it became readily observable.

Because humans and most other denizens of Rifts Earth are not inherently magical beings, they can not survive ingesting the purified magic energy found in ley lines. Ley Line Sickness is the tragic result. This is of special concern to Ley Line Walkers, since they rely on Ley Line energy for their power.   To avoid the sickness, 'walkers wear a special mask that filters the pure ley line energy into a form and concentration humans can absorb. These masks enable them to operate freely within Ley Lines and Nexus Points.

The arcane abilities of Ley Line Walkers are as personal as the energies that course therough their chakra. Not only are each 'walker's energies unique, but their internal balance at each chakra is different and fluctuates over time as well.
Because of this the outward manifestation of each Ley Line Walker's arcane abilities is unique. Some Ley Line Walkers'powers are showy and bright. Some are dark and foreboding. Some take on elemental characteristics, while others may seem almost scientifically abstract. And these characteristics extend beyon the mere aesthetics of the abilities. The characteristics manifest real tangible effects.
For instance, one ley line walker may be able to create an armor spell that appears to be glowing radiant metal while another's might be murky tentacled blackness. The glowing armor has the added affect of providing light and might even provide additional defense against vampires and the undead, while the murky armor provides a measure of concealment and benefits stealth. Another 'walker may make armor that appears to be twisting thorns, providing a resistance to poison to the wearer and a poisonous scratch to anyone coming in contact with it. These are examples of the trappings of the personal nature of a Ley Line walker's arcane abilities.
Cover Photo:A ley Line Walker at his full puissance walking in the raw energy of a ley line nexus.   Below: A 'walker channeling her energy. 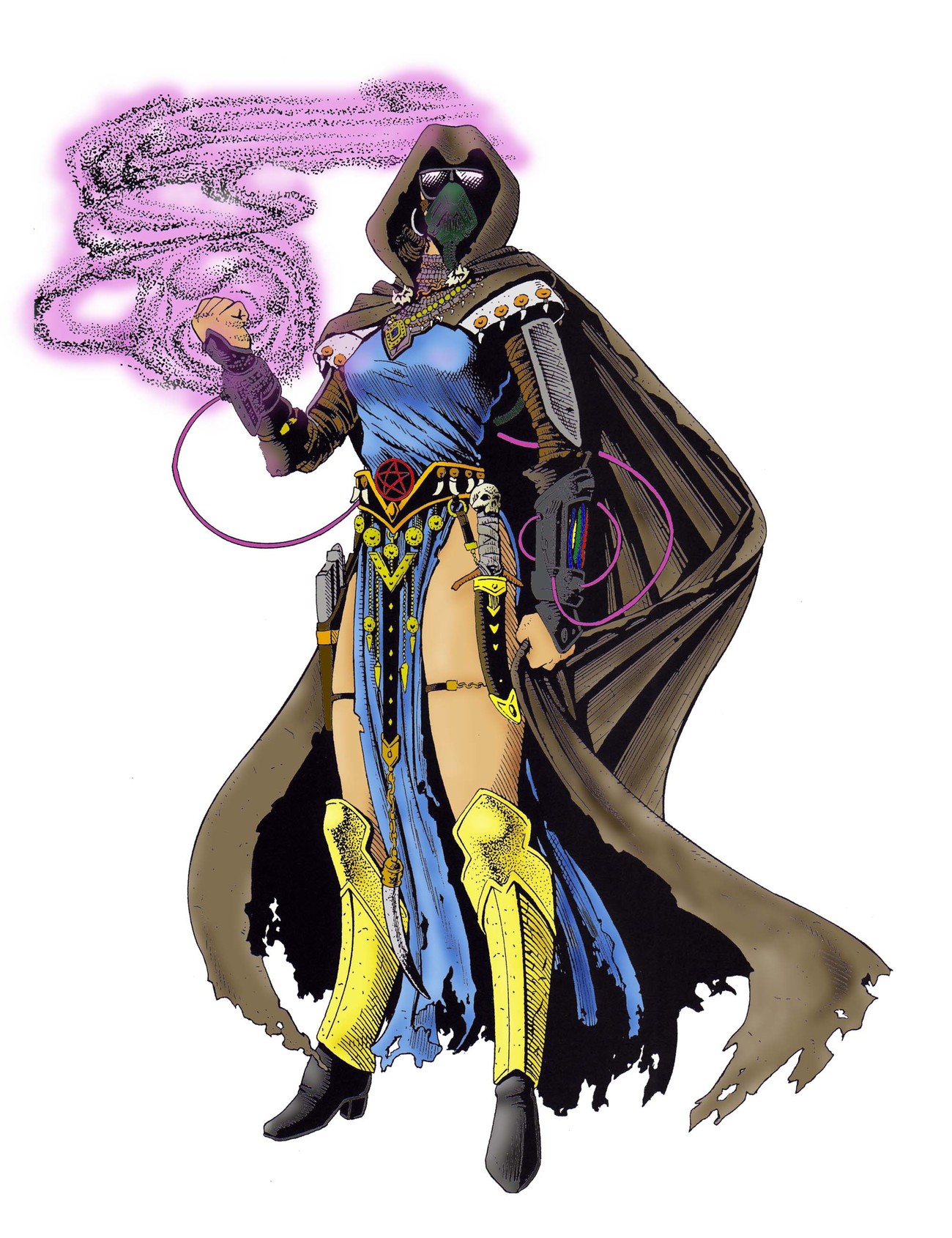 Female Ley Line Walker by Ballistic9
The abilities of Ley Line Walkers to manipulate arcane energy is dependent upon their ability to channel their own personal energies into their chakras and access it there. Each chakra serves a different purpose and so each ability of a Ley Line Walker must access the energies of the associated chakra(s). 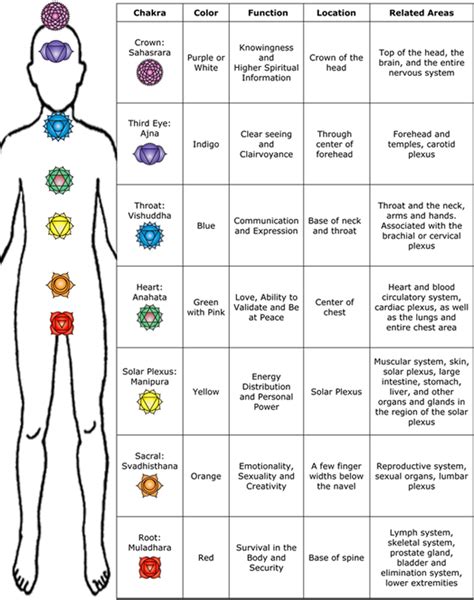 Journey Through Chakras by anonymous
The root chakra is the first and most basic chakra while the crown is the seventh and most advanced chakra to control. Abjuration magic abilities associated with basic survival and protection are associated with the root chakra. The second, sacral, chakra deals with emotions, sexuality and creativity. It is a vital chakra but few powers are dependent upon it alone outside those used to change or transmute substances. Rather, mastering these concepts is a prerequisite to accessing the more advanced magics and is often used in combination with other chakra. Magical abilities relying on controlling and evoking raw arcane power need access to the third chakra located in the solar plexus. Many Ley Line Walkers don't bother developing any chakras beyond the solar plexus. By the time a Ley Line Walker is capable of accessing their fourth Chakraof the heart, they have become quite experienced and possess great mental fortitude. Magic abilities relying on the heart provide courage and are primarily focused on life and healing. When a Ley Line Walker uses their heart chakra not to bolster life, but to take it or abuse it, Necromancy lies along that path. Fourth chakra energies are also invoked in concert with the fifth chakra to effect the mental states of others. Charming, frightening and encouraging comes from the throat chakra. Mastering the energies of the sixth chakra, also known as the third eye, permits mind magic and illusions; while the power via the seventh and final chakra permits astral travel and communication with spiritual and higher order entities.   It goes without saying that the more capable the Ley Line Walker, the more centered they are. But like all skills, channeling energy into each of the seven chakras requires constant practice. Many a Ley Line Walker has concentrated so much on their higher order energies, neglecting their more basic chakras and losing balance. Usually one of the first to be neglected is the second chakra since it is primarily responsible for so few abilities. As a result, many Ley Line Walkers devoted to the more advanced expressions of magic can be unbalanced emotionally, express their sexuality in unhealthy ways, or become either too addicted to creativity and imagination or devoid of it. Another example of unbalanced chakras is

Alternative Names
'walker, Spellcaster
Type
Arcane
Demand
Ley Line Walkers are in high demand wherever they go. MIlitia, mercenaries and merchants all desire the flexibility that Ley Line Walkers can provide.
Legality
Ley Line walkers, like all manipulators of the arcane, are illegal in the Coalition States and will be captured or killed on sight if capture is not feasible.