If such weapons really existed...May the gods have mercy on the souls of all those that had to face them.
— attributed to VIkarion VII., Rhomeian Emperor

Millennia before realms such as the Tarquinnian Hegemony or High Kingdom of Feranar were even thought of, the world bowed to the might of five great states. These nations, Rhomeia, Lantea, Ascalon, Leng and Theocal, presided over the Golden Age of Humanity and saw them rise to unprecedented wealth and knowledge. That was until War and Chaos reared their vicious heads. What exactly caused the Age of Wrath is unknown. All we know is that Humanity tore itself apart in over seven centuries of conflict. Wars and battles that would dwarf every other of their kind fought for millennia thereafter changed the very landscape of the earth. Armies of unimaginable size would drown the land in a tide of blood. And the greatest of human minds would give birth to some of the most heinous weapons ever created.   The perhaps most famous of these weapons, aside from the Eye of Gefrin, is known today as the Solar Scythe, a powerful artillery piece that could utilize the might of the sun itself to burn its enemies. Strange tales tell of battles where these Scythes scorched entire cities within the blink of an eye and burned enemy formations in as much as twenty kilometres distance. Yet it is only one of an entire range of weaponry that used the sun or rather its rays, as some texts seem to indicate, to power themselves. Commonly they are known as Solar Weapons and they have captured mankind's imagination for millennia after the Age of Wrath came to an abrupt end. Many a story and myth written in these days features the strange contraptions of mirrors and crystals, usually as the tools of a villain or last resort of a noble kingdom. In reality, the chances of such a weapon reemerging are slim at best. The fact that with any and all plans for this type of weaponry have been lost, there is no nation in the known world capable of producing mirrors that could focus light to such a degree guarantees this. And perhaps this is for the best.

Ancient historians called it "too destructive"! Can you imagine what that means? "Too destructive" in an age where the destruction of a massive city was an almost daily occurrence! By the gods...what did our ancestors create?
— Atechander Galdis, Archivar and Engineer

A Rhomeian Laser?   The only power which could even attempt to recreate this type of armament would be none other than the Rhomeian Empire itself. It survived both war and cataclysm and with it, a ton of ancient scripts, some of which might contain the plans for such a weapon. However, even if the Empire has attempted to make this device it surely has failed, the fact that no use of this rather blinding gun has been noted during the myriad of attacks it has suffered over the millennia.   Surely the realm would make use of a weapon that could easily turn entire fleets to ash? Fear cannot be the reason as Rhomeia has unleashed weapons of ancient design in the past, such as the Eye of Gefrin or Poison Shroud. It would be especially odd as functioning Solar Guns would make the Empire's heartland virtually unassailable. Surely they cannot have managed to revive this primordial monstrosity.   Then again, few have ever managed to gain insight into the ways of the Eternal City. And who knows what may be worked on in the depths of Rhomeian Factories. 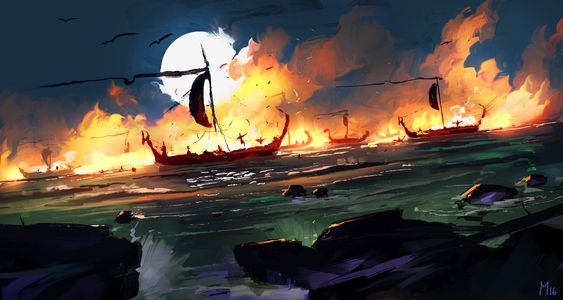 This is a surprising addition in a normally very grounded world. I wonder what sort of device the Rhomeian empire would fear to use... Is it powerful enough that firing it would destroy themselves as well? I wonder if they simply lack a key component...   Or perhaps they have fired it, and everyone assumed it was a natural disaster...

The idea of this weapon is absolutely terrifying. I'm glad no one has been able to replicate it.

This gave me chills.