Heronia has slid toward the edge of destruction for decades. Murmurs of a titanic slave revolt, the Kingdom of Auranor on the brink of civil war, Heronian kings and tribes divided as never before...Heronia's people cry out for a saviour. But the one they may get could turn out to be worse than any nightmare they could imagine...

Musings of the Past

"I began my journey in a humble abode on the plains of southern Heronia, son of two peasant farmers. My poor circumstances barred me most professions, so when I entered the services of a local holy man as an attendant, many saw it as the height of what I could achieve. The realms of the sacred have always been of interest to me even if I did not always agree with the utterances LIES of the priesthood. My fate soon changed when I decided to follow Tuedarenik the Great Blasphemer! King of Ingrates! on his campaigns."
Immaculate Apperance

To outsiders, Sevrin is an impressive figure. Tall and energetic despite his advancing age, he moves about in a calculating manner, taking care to avoid any unnecessary movement. His face always cleanly shaven, the completely greyed hair always kept backwards, his green cloak and dark blue shirt with his ruler's coat of arms always free of even the slightest speck of dirt. The epitome of a great statesman, polite, calm and hardworking.
Hidden Thoughts

But those that know the man personally will quickly tell you that something is very, very wrong with Tuederik. His voice is too calm and low. His movements are too studied and stilted. There is something behind his piercing green eyes. Some even claim to hear him mutter the strangest things to himself and one unlucky one who by chance got to look at Sevrin's personal writings does not dare talk of what he found there.
Tuederik had always been a stalwart man, utterly convinced of his believes. And at first, he seemed normal, one of many advocating for change in Heronia, even if he did so in a more fanatical manner. His message of peace, a united Heronia and a return to simpler times was greatly welcomed in a land that had suffered war and foreign exploitation for nearly five decades. Only with time and growing power did his darker side emerge.   "Sadly I soon discovered that weakness and corruption ran rampant in his court. Servant of the Midnight Clock! I should have seen it sooner, for what can be expected of a man that keeps in his company the impure, the degenerate and those of lesser blood? A stinking pit of the lands worst excrements was what I found there. Heronia must be pure! But also enlightenment."   For keeping stalwart amidst the darkness, the Lord granted me vision. Knowledge of the true ruler. The one and only rightful Sayn and saviour of Heronia! Alive. He MUST be alive! I saw him. Tall and wise, his dark hair topped by a silver crown, holy light spilling from where he was standing, the very border of the divine realm.

by Markus Luotero
Around 3301 DA, Sevrin began to gather followers across Heronia, forging a fanatical army to do the bidding of his god and Sayn, Andranei Kordan, long dead son of Heronia's last great King. Claiming that the unfortunate was still alive, only waiting for the Heronians to cleanse themselves of their sins to return to the throne.   "It is not the simple peasant's fault that the land withers under sin. What else can he do but join as he sees the degeneracy around him? Slavers in golden palaces, decadent Kings on stolen thrones and foreigners whispering words of corruption...what can a simple man do but succumb? No, for Heronia to prosper there needs to be a new beginning. A land united and freed from the corrosive influences currently choking it. A land under the guiding hand of the divine ruler! And in his absence under mine."   Taking over the Reikyn Vale, an especially fertile and resource-rich area, as his fief, he began to build a new realm, designed after his very own vision of a "divine" nation. A realm fit for the only true King and God of all Heronia. Declaring it the Sacred Imperrek of Drunaika, with himself as the "Blessed Regent", he began to expand. And in the chaos that followed Tuedarenik's death, he did so day by day, casting his shadow over evermore land.   "A good simple life is assured to those who follow in his stead ... as is justice for every grievance suffered. But we need to prove worthy of his grace. Repentance, faith and purity ... all small prices for Andranei's light."

There is one who still cares for Heronia and its people! Who sees the land wither away and weeps. He speaks to me and guides me. And through me and you and all of us, this land shall prosper once more!
— - Sevrin to the people of Chatrek

"To summon Andranei forth into the mortal plane, first, there needs to be prepared a suitable realm for him to rule over. A nation free from the lies of the unbelievers. Free from false blood. It must be according to his design, lest the Throne remain empty forevermore. It cannot ... no cannot remain empty ... not empty ... no no no no..."
Loyalty

"There can be no greater authority than Andranei. His word is law and through me, it is that his law is spread. To deny him is the highest of heresy. To question him utter blasphemy. To be his sword, his herald, his working hand is to be a servant of God and there can be no greater honour on this earth."
Faith

"Andranei is the one true lord. Only his presence can bring salvation. Only his will can stop the dreaded clock before it reaches midnight. This infernal machine ... doom bringer ... wretched creation of the abominable ... It needs to stop! StopStopStopStopStopStop"
Purity 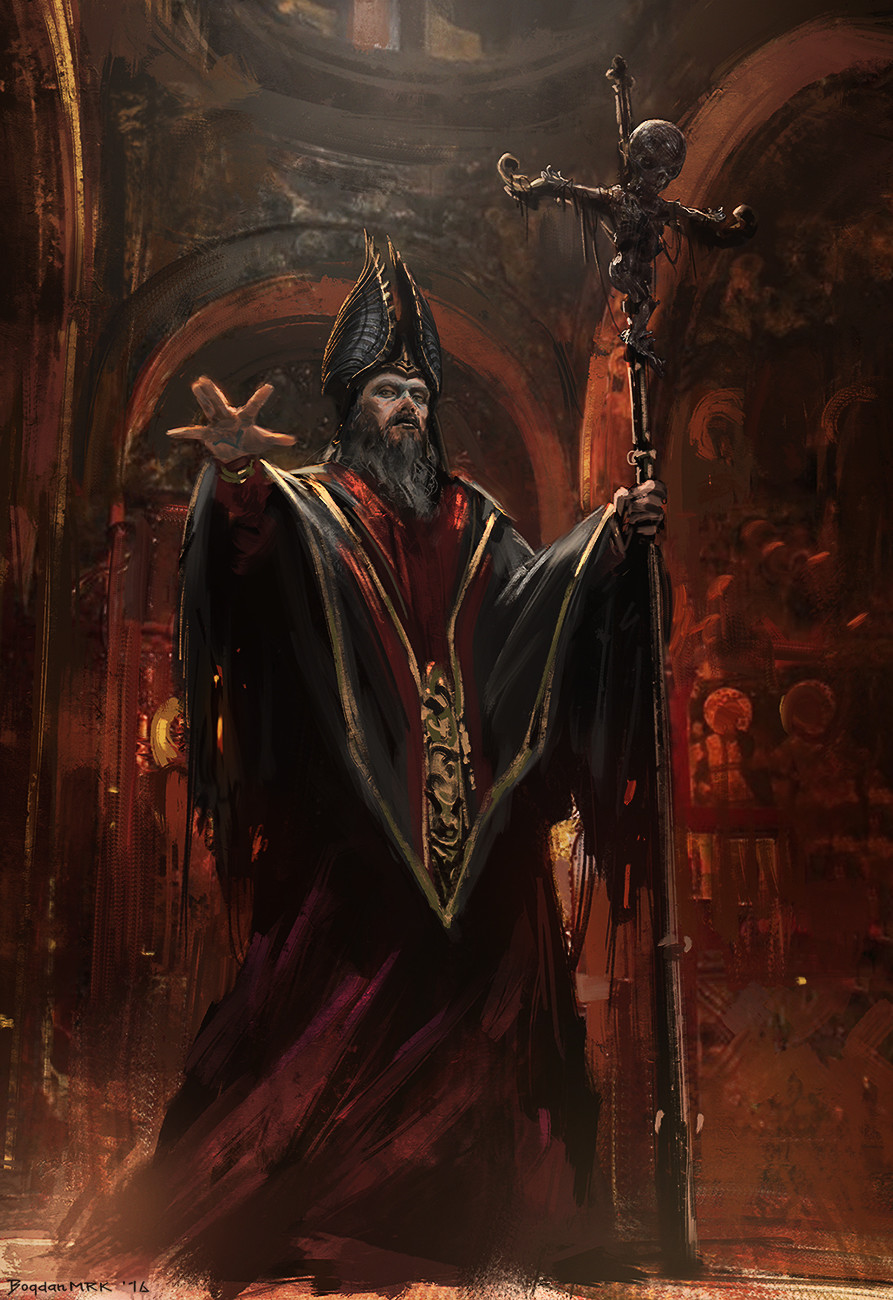 by Bogdan Marica
Nearly three decades after its inception, the Sacred Imperrek stands as one of the larger powers in southern Scetia and a serious contender for Heronian re-unification. It would be the first time in over forty years.   A fact that is sure to cause significant alarm in the wider western world. Most everyone observing the Heronian conflict was predicting that it would be a monarchy that re-unites the struggling factions. However, no one could have predicted it to emerge in such a form.   At present a Regency, due to the absence of the dead Andranei, the Sacred Realm is reportedly a thing of nightmares: an absolute autocracy combined with a system of racial hierarchy and a purity cult that makes even the most extreme of faiths look tame in comparison. Gods save Heronia - for no one else can...   "The hardest decisions require the strongest of wills. I am the instrument of His will! Only a pure Heronia will suffice as the seat for our Immortal Sovereign. He is Alive! The degenerate filth that pollutes our land and thought must and will be cleansed! ... A pure realm for a pure God! The clock will never strike midnight! ... And if it takes me another century ... Heronia will be ready ... Andranei will return ... he promised it! ... Gods ... What have I done? ..."

Could you imagine if Andranei returned? If the madman is proven right? I can't imagine anything more terrifying. For it would mean that he was truly doing God's Will.
— Segret Piudarik, King of Arenik 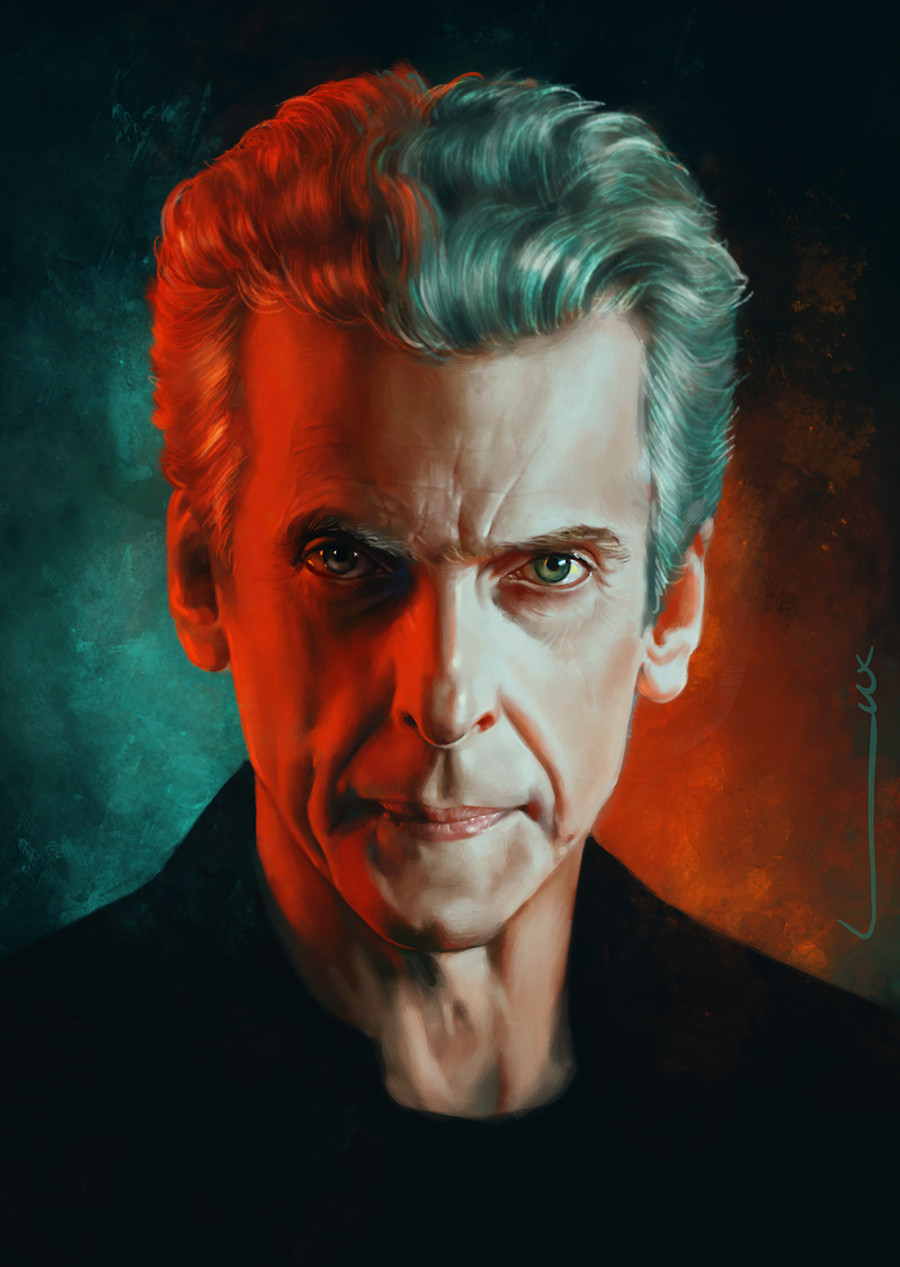 Current Location
Silverthrone
Ethnicity
Heronian
Honorary & Occupational Titles
Blessed Regent of Drunaika
Warlord of the Reikyn Vale
Year of Birth
3265 DA 67 Years old
Children
Aligned Organization
Sacred Imperrek of Drunaika
Racialism
At first, merely a facet of the Blessed Regent's speeches, racialism has grown to become a key part of the Sacred Realms existence. And has found fertile ground in a Heronia that has suffered repeated foreign invasion and exploitation.   Based on a complicated system of facial, bodily and blood traits, the racial hierarchy employed by the Regency divides the population into a dozen categories. Those of "pure" heritage have few things to fear, aside from the nightmare that is his realm.   Those in the lower categories can at best hope to be utilized as slaves, while those of "foreign" blood can meet only one fate...extermination...Purges are an almost daily occurrence and Sevrin's utterly loyal guard carries them out with brutal efficiency. 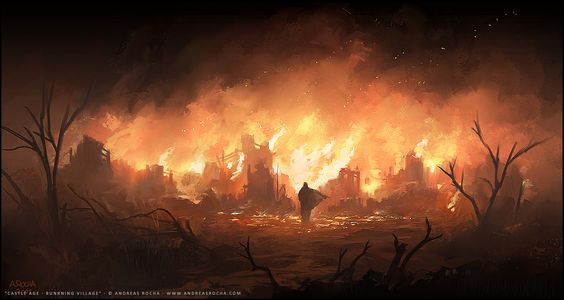 Andranei lives!
We must prepare his throne!
The Realm endures!
There is much to be done.
— Mantra of the Sacred Realm

Report on the Sacred Realm by Anius Crassus   "...What separates Tuederik from other demagogues is that he is not using his "faith" and ideology simply as a tool. He totally and utterly believes every single word he says and will do everything in his power to see it reality. There is no reasoning or arguing with him, for he is convinced that he is doing God's work. And that is the most frightening thing about him..."   The Midnight Clock   Everpresent manifestation of Sevrin's speeches, the clock represents the threat of oblivion should Heronia not grow pure enough for Andranei to return. At least it is what his followers believe.   Mentions of the clock have increased over the years, it supposedly reaching the "Eleventh Hour" with the declaration of the "Sacred Realm".   Some consider it an odd coincidence that "Midnight" seems to grow ever closer as Tuederik's mental state worsens. Every day it ticks closer to the foreboding number and every day the purges and manic speeches grow fiercer... 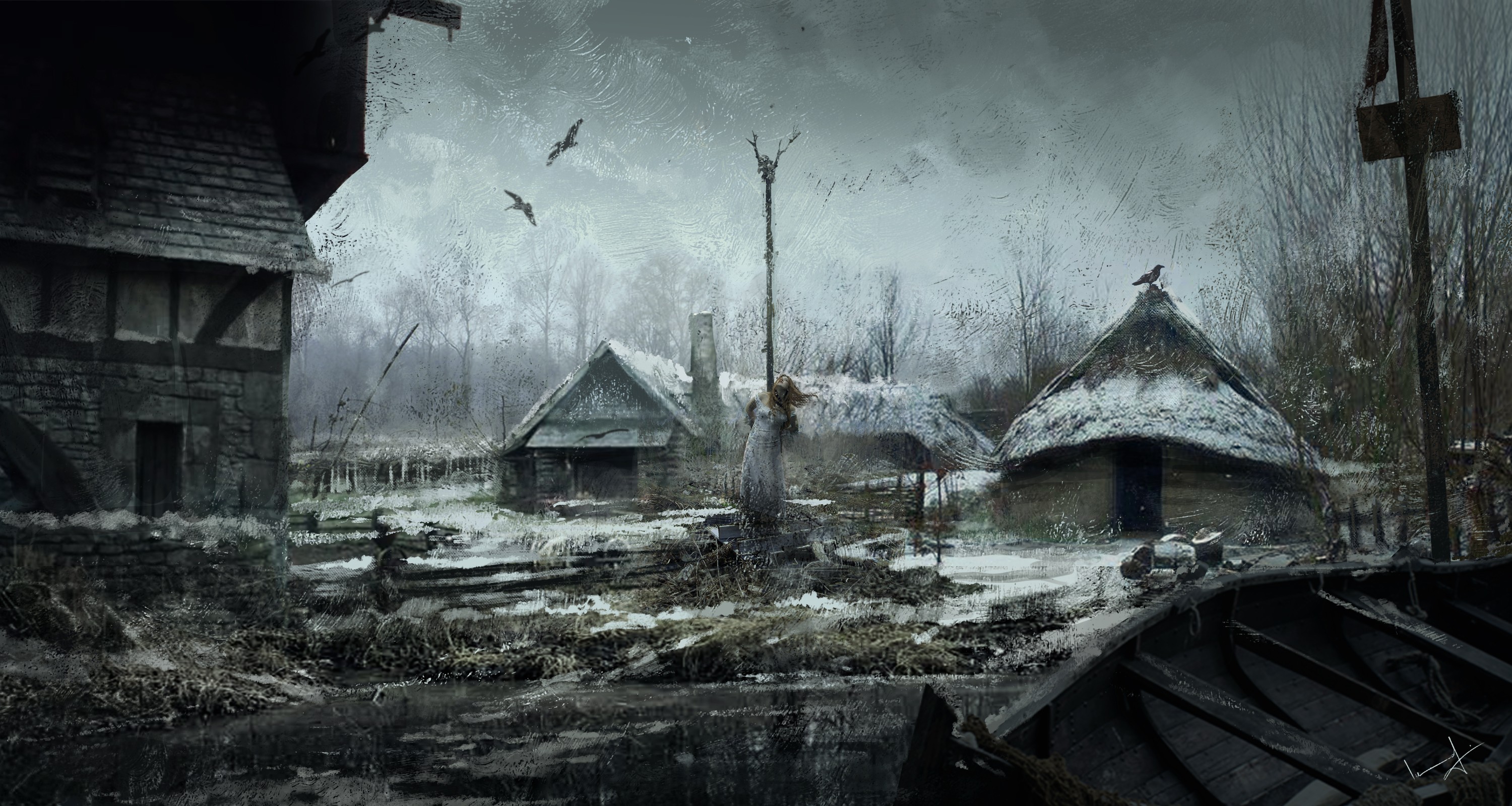 This seems like the first article of yours I've read that speaks of current events rather than ancient history.   He's either insane, a secret robot, or both.

Thanks for the comment! Yeah, decided to do some stuff in the world's modern age for once. And he is definitely insane. Organ music just lends itself well to madness ^^

What a terrifying character, and a great antagonist. Definitely wouldn't like to meet him. Great article!

Thanks! Good to know I managed to convey that. He could make for a neat foil. Maybe in a future short story.

Those tooltips gives me the shivers. Yikes. Really well done. There's definitely something not quite right with him.

Thank you! That was the feeling I was going for.

'Evil' made believable. For salvation allows any means necessary, or does it?   Amazing article!

A disturbing and entertaining read, great job :)   Also, I hope that you have verified your clock!