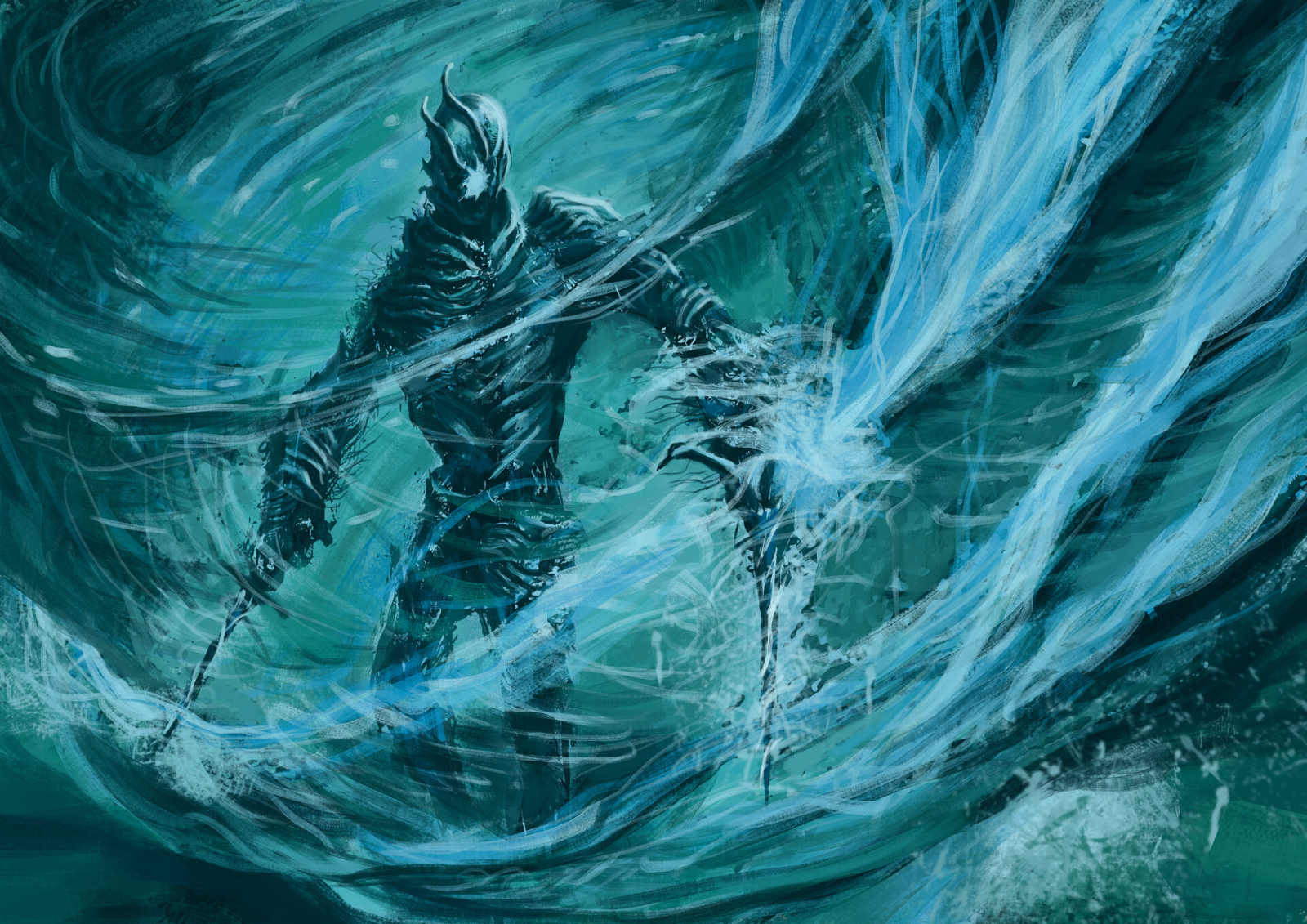 Below the waves of the upper deep,
Far far beneath there is an abysmal sea,
A swirling maw of ancient greed,
Inhuman conscious unfazed by any plea,
And if you hope your sanity to keep,
Hope to never look into the abyssal deep.
— "Abyssal Sea" by Aderich the Heronian

Not much is known about the great waters of the world. They divide the world and surround it, a great mass of water as endless in width as in depth. Travelling this mass of blue is dangerous for a myriad of reasons. Storms of divine might, patches of predatory sea, soul crushing silence and much much more. But all of it, even the greatest of horrors, pales to what lies deep beneath the roaring waves. 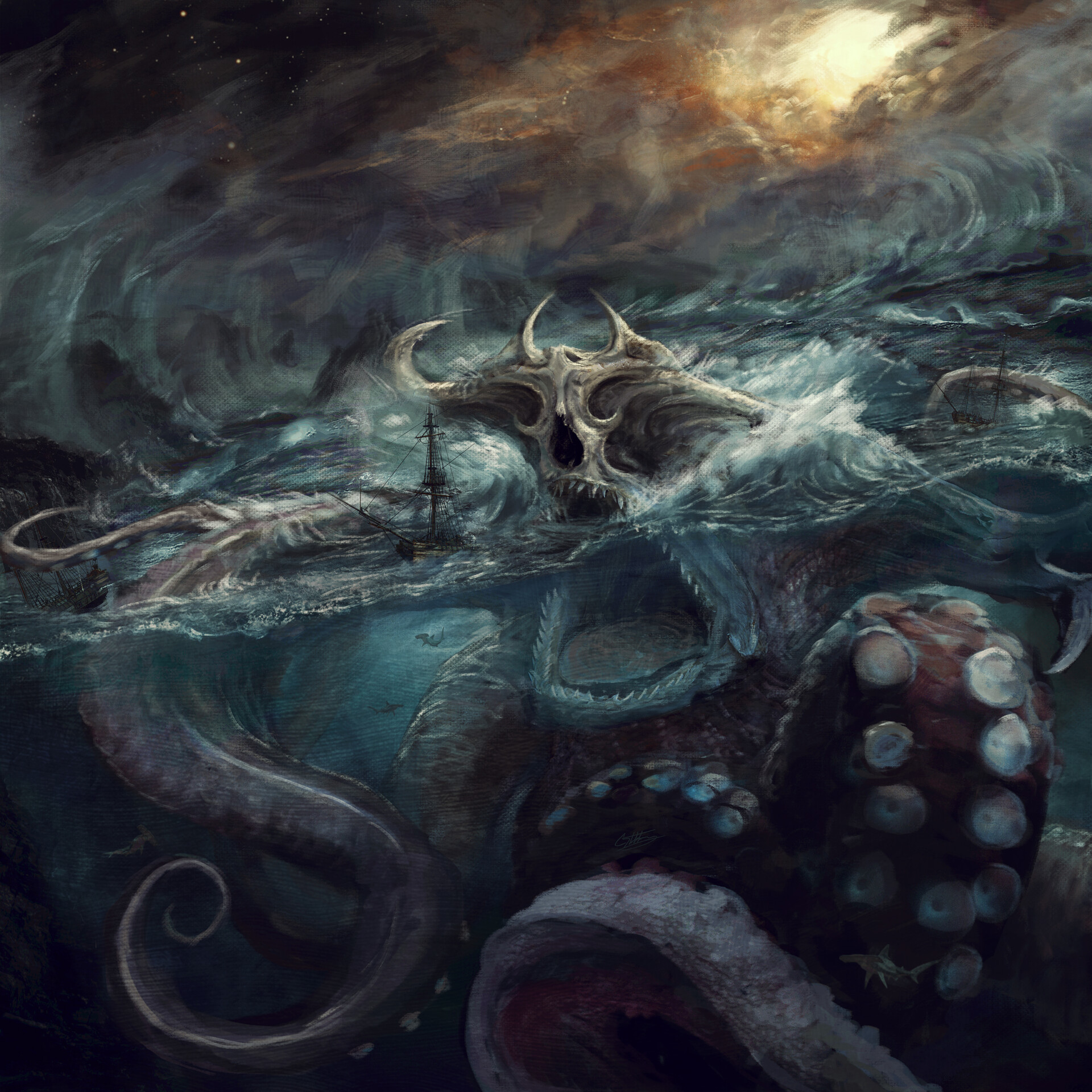 by Caelan Stokkermans
Deep beneath the waves, in a world that no light ever touches, It resides. A storm that covers the entire ocean floor. An everchanging mass of dust and water, raging with a speed and ferocity that no earthly storm can match. It bulges and writhes, raising peaks higher than any mountain, only to throw them down just as fast, collapsing into endless valleys, holes that lead only into a black abyss. Within that mass are shapes and forms, moving all sorts of unnatural ways. And under the dust and water, there is flesh. Maws, bigger than nations and smaller than flies, countless in number they dot the storm. Opening and closing in a strange rhythm they reveal what may be teeth or rock, jagged apparitions that never seem to be sated.   Tentacles, made of water and flesh and shadow and dust, rise from this chaotic ocean. They rise toward the surface, toward the light, and all gods are with those that are caught in their grasp. For their fate will be worse than any hell. For they will become one with Rodran, the mad god. Eternally caught within the storm, their screams and splintered souls part of the swirling, writhing mass. As he once became broken at the hands of mortal trickery, so will he break and torture those humans that dare to enter what was once his domain.

In ancient time, long before the Oblivion Hour tore the world apart, Rodran ruled over all oceans of the world. That was until the human Ignam tricked him into turning himself into a figure made of ice and smashed him. With Rodran dead, Humanity could freely travel the waters. But Rodran did not die. In a million splinters, his body sunk into the sea. And in the eternal darkness of the ocean floor, it reformed. His sanity, conscious and very soul shattered, Rodran reformed into a swirling mass of insanity. His body merged with the water and dust around him and spread across all seas of the world, a swirling vortex of anger, hunger and rage. And from the abyssal depths, his tentacles rise to hunt for humans. And they bring silence, insanity, plague and torture. And every Human that dares to travel the oceans, risks to make himself a target of Rodrans thirst for vengeance.   Rodran is present in a large number of different mythologies, a representation and manifestation of the volatile nature of the Great Divide. Additionally, many stories have been spun around the mad god, connecting him to all sorts of strange phenomena.

Ferans, a people with a long tradition of sailing on the Divide, have adapted the deity as one of their great enemies. Their faith, the Vodarian Church, sees Rodran as one of the great demons of Abadon, the endless abyss from which all evil rises. During the final battle for the fate of the world, Rodran will rise to the surface and cause havoc across the world. In the end, he, like all the other greater demons, will fall at the hands of a legendary hero reborn. For Rodran, this will be no other than Ignam the Trickster.

Heronians view him in a different light. Madness, anger, hate for humans are all still present, but in Heronian myth, they stem from the fact that Ignam broke a sacred oath when he tricked the god. As such they believe that Rodran, mad he may be, can be reasoned with. If treated with respect, or through sacrifice, the deity can be calmed, ensuring safe travel across the Divide. Those seeking vengeance will also call upon him, wishing that his infinite maws may devour the object of their ire.

The whispers in the deep. The voices, how they scream and wail. So...beautiful.
— Victim of Manyface

Ignam the Trickster   Like his divine enemy, Ignam is part of many stories around the Divide and almost all of them describe him differently. Some see a noble hero, a prince that acted to free Humanity from Rodran's shadow. Others see a beggar, a vile trickster that killed a being that only wanted to defend what was his.   Most of these stories stem from Heronian Mythology and most historians agree that the real Ignam if he ever existed, was most likely related to one of the groups that would eventually develop into the modern Heronian tribes. Fitting as Heronian myth takes great pride in the deeds of a series of "heroes", each of which tricked or beat the gods in various ways, and in doing so, paved the way for the success of their people.

Truly I am in awe of your abilities, oh great ruler of the ocean! One last time, before I am to go, I wish to see your great abilities!
— Ignam

He's the guy who eats you if you try to sail beyond the limits of the game world.   Maybe be a bit less vague in your description of the storm in the second paragraph; How can there be a storm underwater? is it made of mud? of some water that's more watery than the water around it? What are these mountains of storm actually made from?   If a ship manages to get his ire, what exactly happens to it? Do tentacles wrap around the ship and crush it? Do giant waves come over it and smash it into the sea? Do giant hail spikes pelt the crew until the ship lists into port, empty of life? Does the crew drown in a giant mud bubble that rises from the depths to envelop the vessel?   Is he any more likely to kill a feran who thinks of him as the devil than a Heronian who thinks of him as a god of justice?   If I'm a sailor, I wonder what sort of superstitious ritual can I perform to protect myself?

Hello and thanks again for your comments!   There are indeed "storms" under water. Masses of mud and dust wirled up by currents and maelstroms. They aren't really storms but do look like that plus I just liked the image of a storm as a writhing, changing mass.   The tentacles are more metaphorical. They are the in-world explanantion for why many ships go lost, fall to sudden bouts of madness or sickness etc. Since Vardania isn't a world that has the tech to fully explore natures phenomena yet, they explain the violent sea as the result of a mad god.   He is insane and has a grudge against humans, so it is really unpredictable who he is more likely to kill. Anyone can be his target at anytime.   There are many. Make a sacrifice (blood, an animal or object of importance), pray to the other gods to protect you etc. Pretty much every culture that knows Rodran has its own rituals to help themselves.